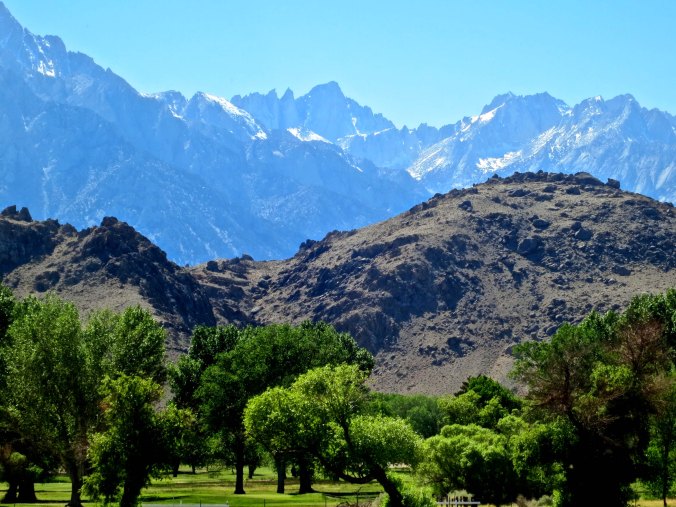 Highway 395 is one of America’s most scenic drives. This view looking up at Mt. Whitney (center top) is one of the reasons why. I’ll be ending my thousand mile trek here. From the top I will hike down several thousand steep feet to Whitney Portal. Peggy plans on being with me for this section of the trail. The hills in the foreground are the Alabama Hills, the backdrop for many of Hollywood’s early Westerns.

The first 100-mile backpack trek I ever led was from Squaw Valley to Auburn in 1974. Considering I had 60 people age 11-70 with me and that I had minimal backpacking experience, it was an insane adventure. Our last 50 miles had involved hiking in and out of river canyons with temperatures soaring over 100 degrees F (37.8 C). As steep as the canyons had been, my learning curve was much steeper! I was lucky the participants didn’t kill me. Fortunately, most of them were eager to go again and I went on to lead long distance adventure treks up and down the Sierras and in Alaska for the next 30 years. I limited the participants to a number that was compatible with my sanity and the environment, stayed at higher/cooler elevations, and required that anyone under 16 be accompanied by an adult guardian.

The second half of my thousand mile backpack trip this summer starts at Donner Summit on old Highway 40, some 12 miles away from Squaw Valley. I once had access to a winter cabin in the area and it wasn’t unusual to have 20 or more feet of snow on the ground. The cabin was warm and cozy. The Donner Party of 1847 wasn’t nearly as fortunate. Caught by bad weather, they were forced to camp out for the winter at Donner Lake, seven miles down the road from the summit. By the time they were rescued, half of the group had perished and the remainder had been forced to turn to cannibalism to survive. I’ll make sure that there is plenty of food in my pack.

My journey from here on will all be in the Sierra Nevada Mountains. I will pass through a number of wilderness areas plus Yosemite National Park. My last 180 miles will be spent in what is known as the High Sierra, following the John Muir Trail. Here are some ‘eye candy’ photos to introduce you to the beauty of the route. 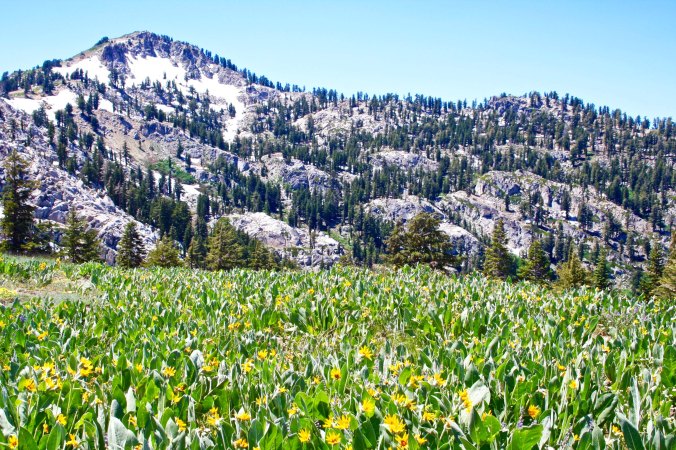 This photo is from the Granite Chief Wilderness. Squaw Valley, site of the 1960 Winter Olympics, is on the other side of the mountain. The field of yellow flowers is mule ears. 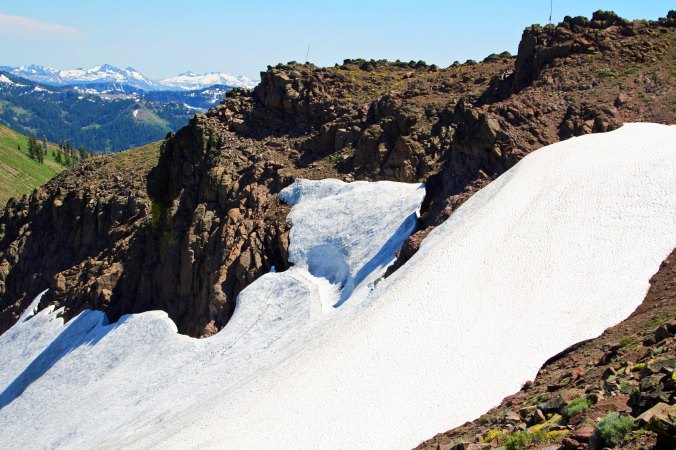 Looking south from Granite Chief, the mountains in the distance are part of Desolation Wilderness, that runs along the west side of Lake Tahoe. 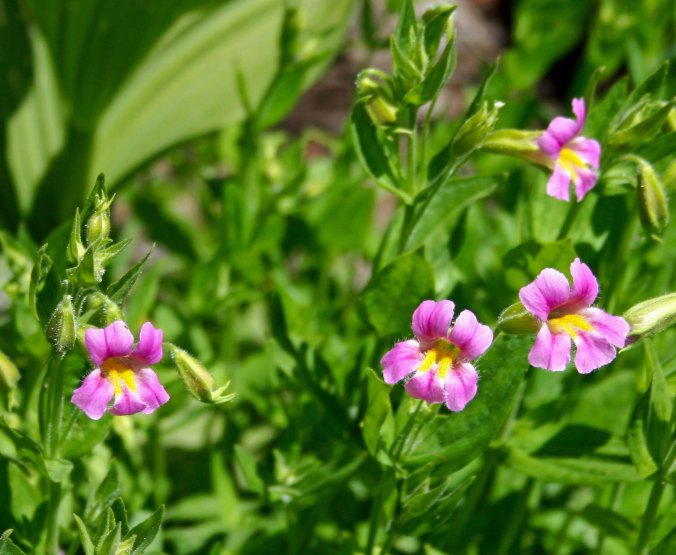 The area is filled with flowers. These are monkey flowers. 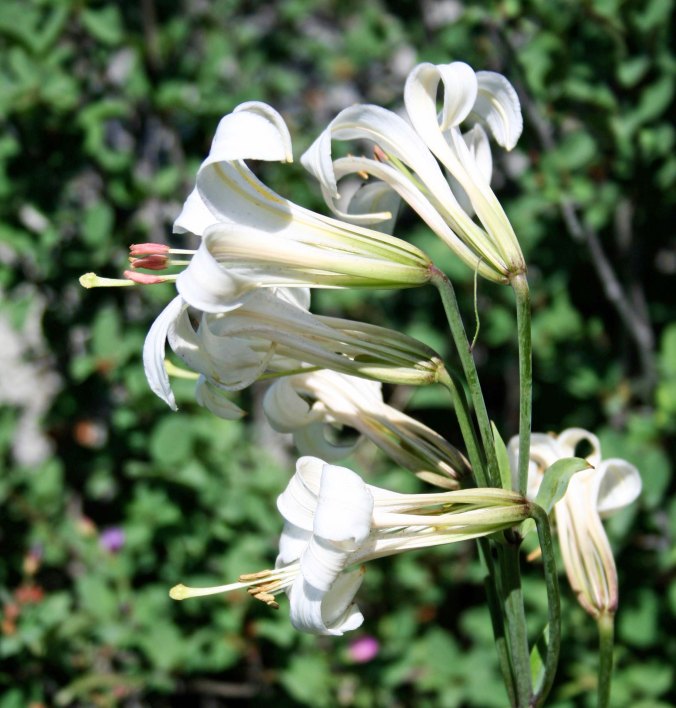 And this is a Washington Lily. 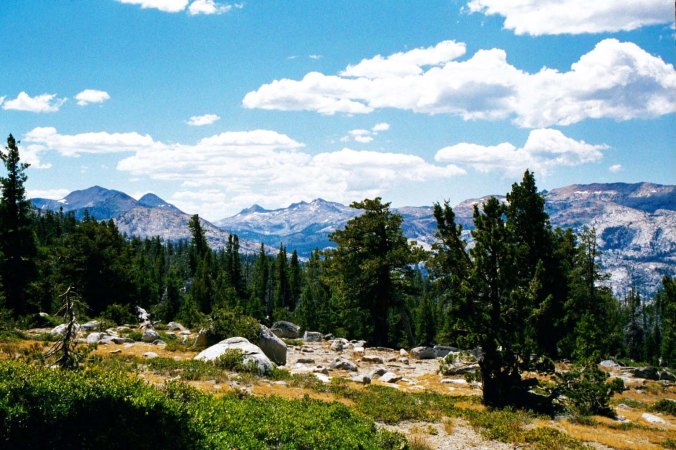 Another view of the Desolation Wilderness. 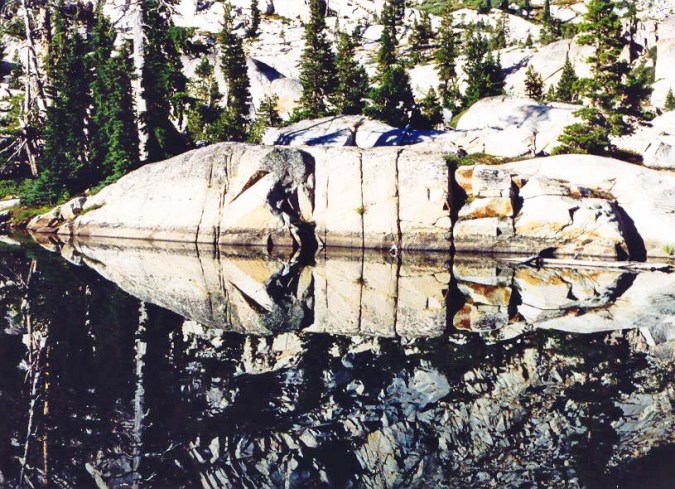 Those who follow my post know I have a weakness for reflection shots. I took this ‘face’ at 4 Q Lakes in the Desolation Wilderness. It’s off the PCT but I may go there for old times’ sake. 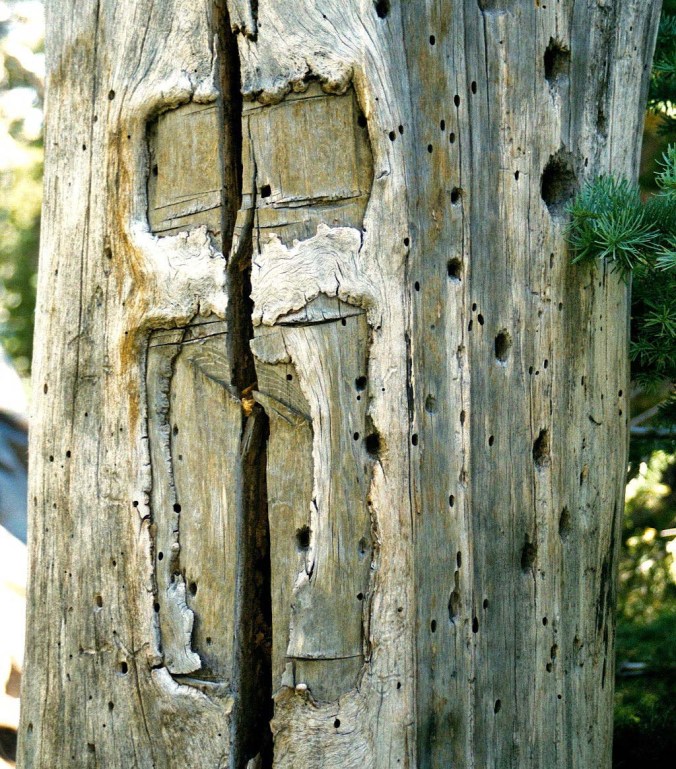 I also took this old tree blaze in Desolation Wilderness. 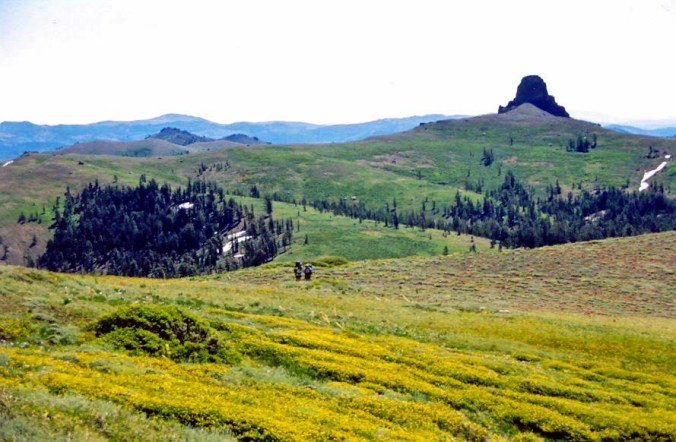 Moving south of Carson Pass, where Kit Carson once ate his dog and his horse, this is part of the Mokelumne Wilderness. The small mountain is known as the Nipple. 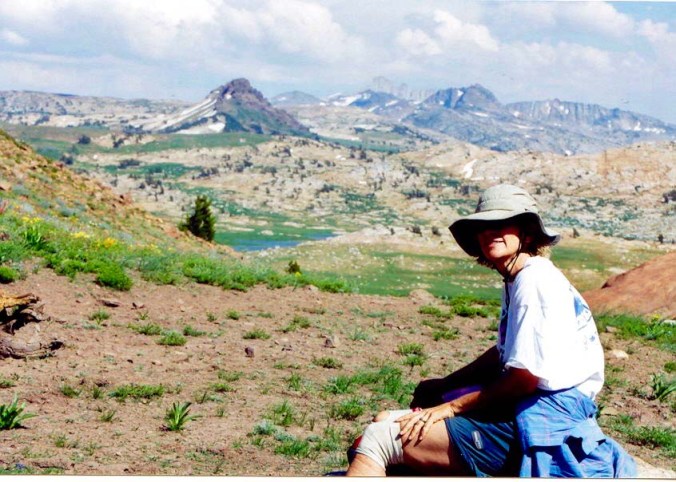 One of my favorite hikes on the PCT is between Sonora Pass and Tuolumne Meadows. This is Nancy Pape who may join me for a portion of this year’s journey. As I recall, 1977 was the first year that Nancy trekked with me. 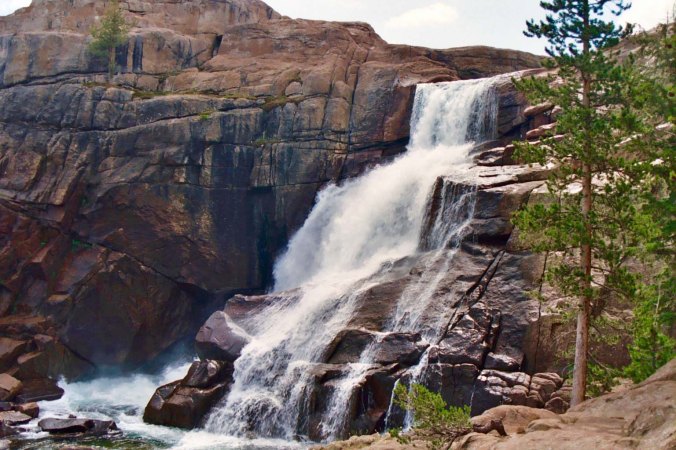 This is a view of Tuolumne River Falls in Yosemite National Park just before Tuolumne Meadows and the beginning of the John Muir Trail. 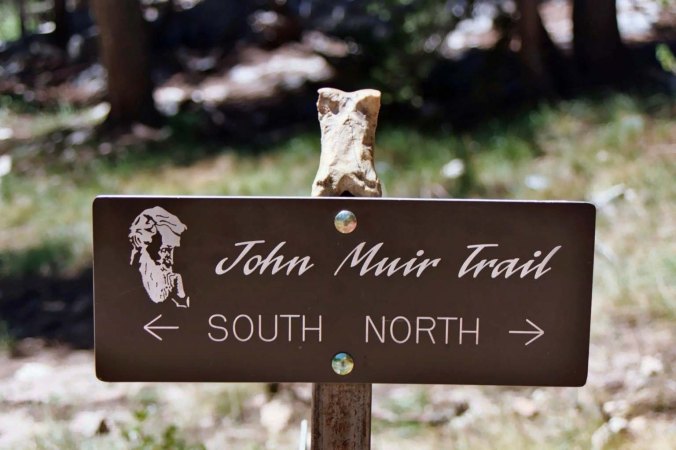 Some of you have asked if 4.9 ounce Bone will be going on the trek. He was squawking loudly about the possibility of being left behind. I finally conceded, but I told him that it would be a bare-bone journey. 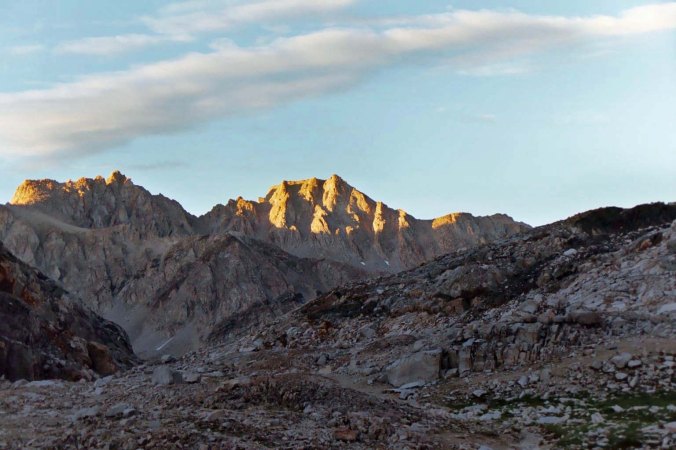 John Muir called the Sierras that he loved to wander through ‘the Range of Light.’ 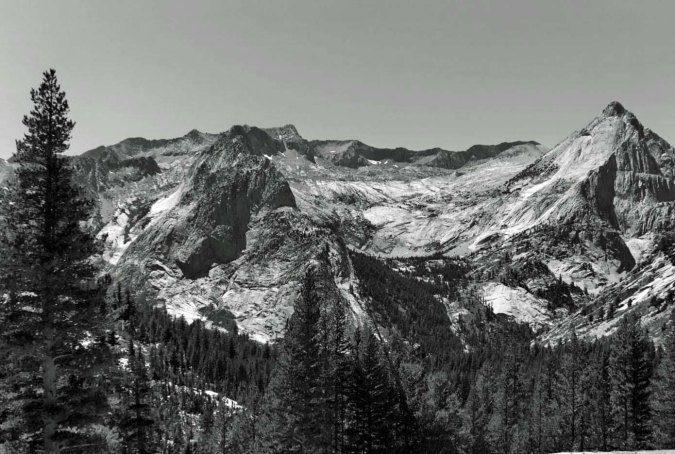 I thought I would add a black and white photo to provide a different perspective on the mountains I will be hiking through. During heavy snow years, which this one isn’t, the passes can be covered with snow and the stream filled with fast flowing water, adding another element of danger to the trip. 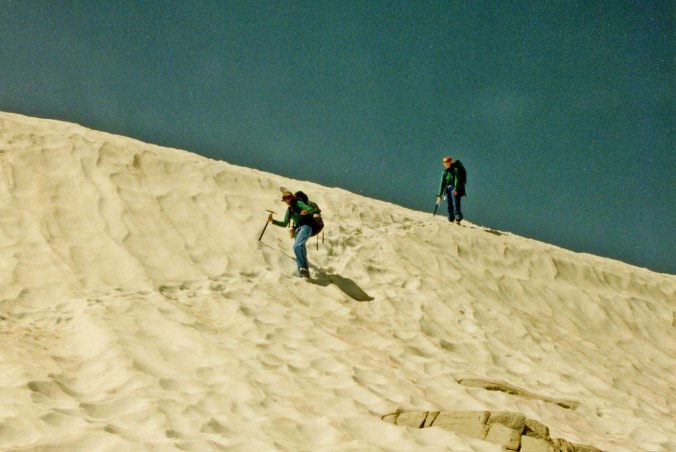 This is a view of some of my trekkers making their way over a snow filled pass, carefully. Slipping could have led to a fall of several hundred feet. 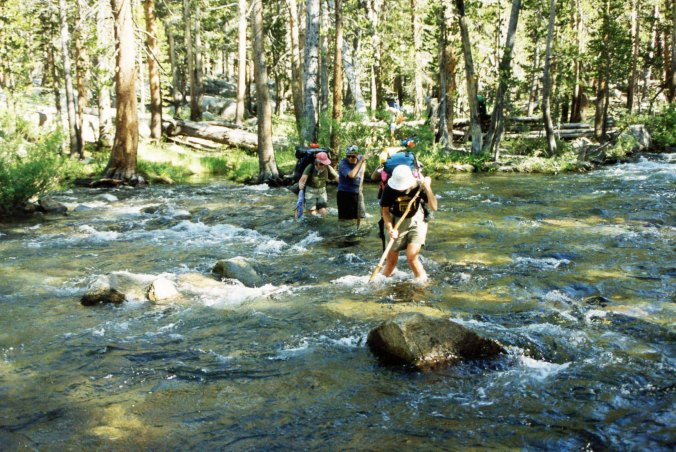 In this photo, Peggy makes her way across a fast flowing stream. Water is powerful. It is easy to be swept off your feet. Two through-hikers drowned last year in the southern Sierras. 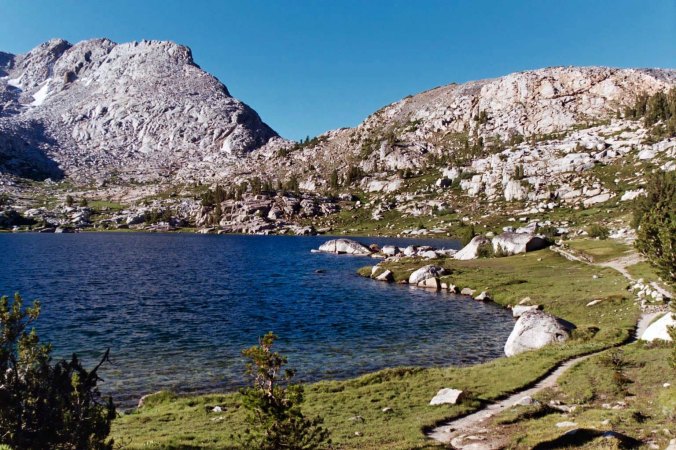 The incredible beauty of the High Sierra makes the journey worthwhile, however. Always. 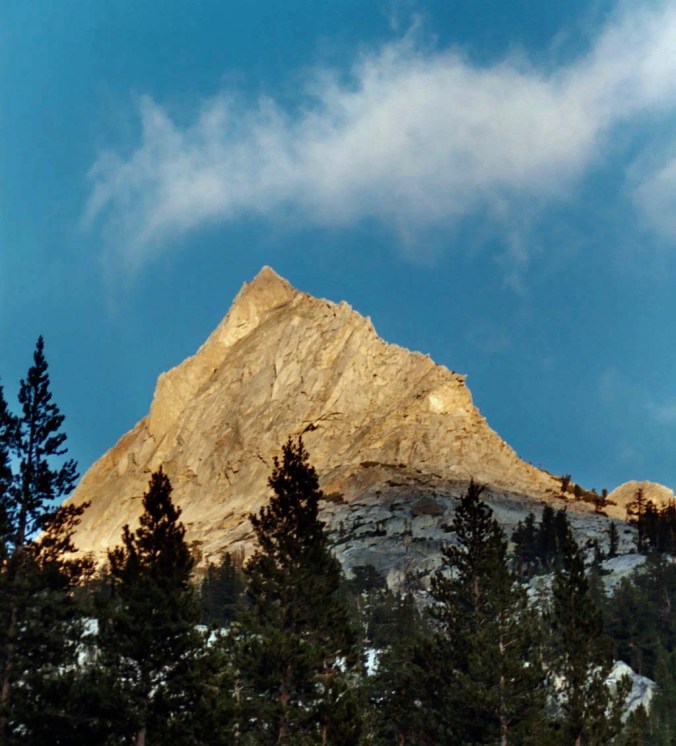 Alpenglow lights up a peak. 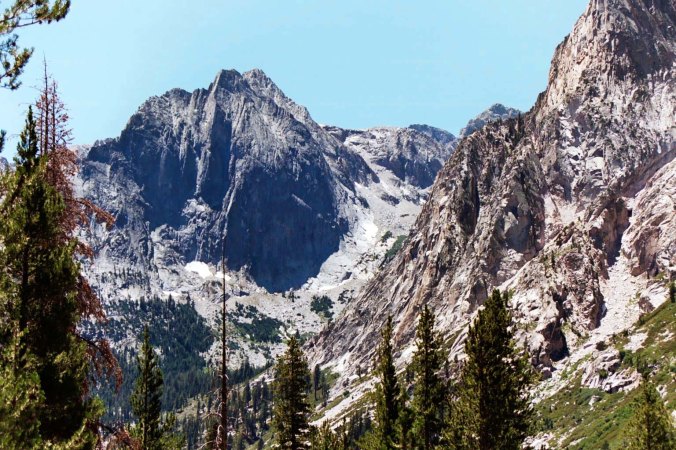 The view coming down from the John Muir Pass and hiking into Le Conte Canyon. I sprained my ankle once following Peggy as she ‘ran’ down the mountain and ended up hiking 80 miles on it. 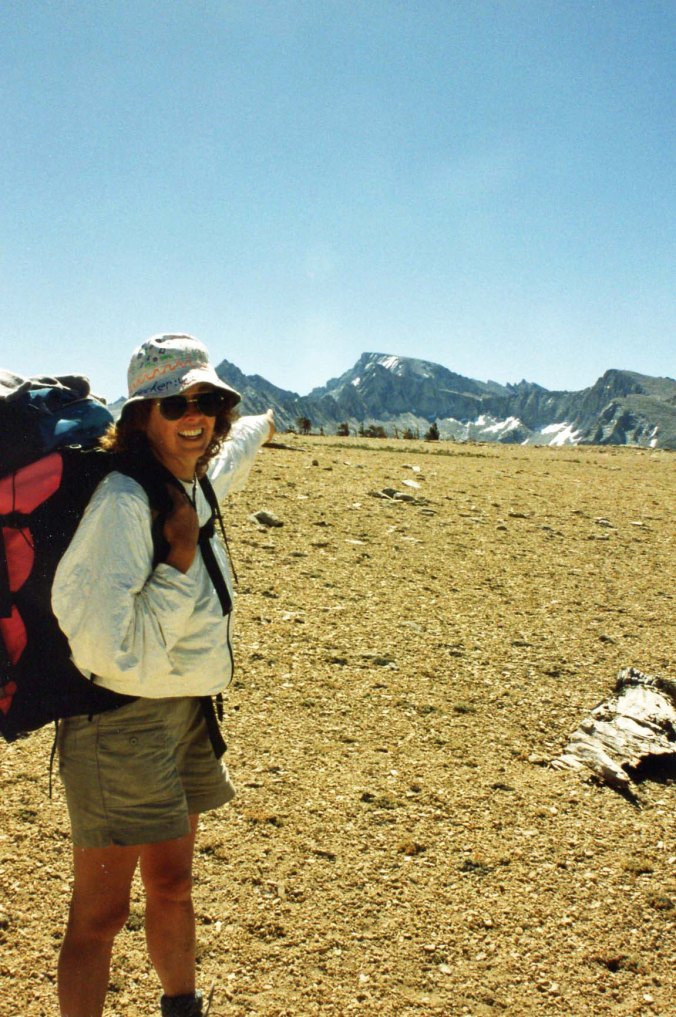 Eventually my journey this summer will come to an end as I reach Mt. Whitney. Peggy is pointing out where it is. 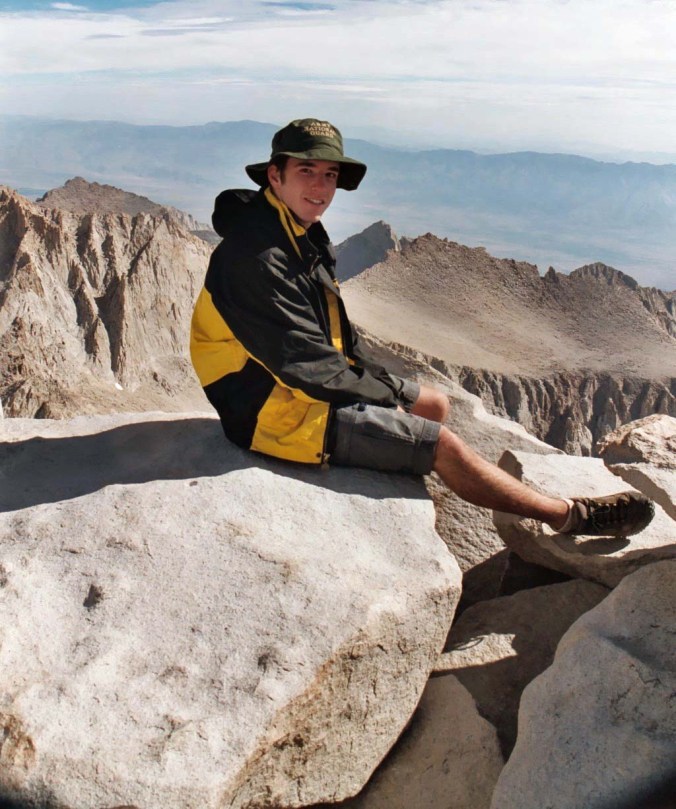 This is my 16-year-old nephew Jay Dallen on top of Mt. Whitney. Jay joined me for the last portion of a hike I did from Lake Tahoe to Whitney to celebrate my 60th birthday in 2003. Jay is hoping to join me again this year. 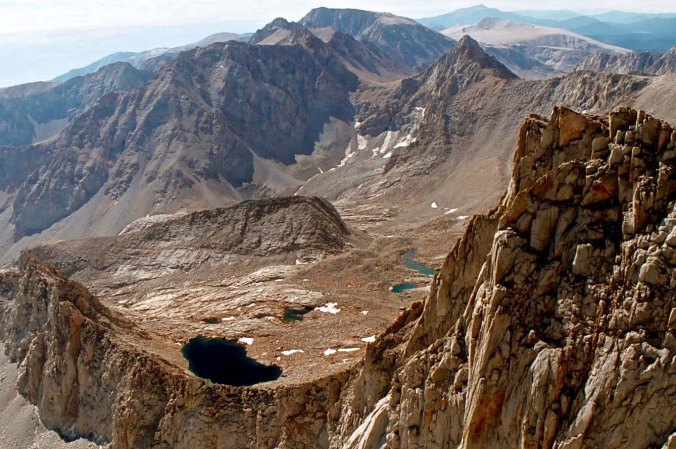 I’ll conclude my preview with this photo looking down from Mt. Whitney.

Peggy and I are out this week backpacking the 40 mile Rogue River Trail. It is both an opportunity to check out our gear and continue our conditioning program. It is also a test to see what kind of sense of humor my 75-year-old body has. Wish me luck! (grin) I’ll respond to comments and check in on your blogs when we return.

FRIDAY’S POST: What factors in your youth led you to choose the path you have chosen to follow in your adult life? I explore some of mine as part of my MisAdventure series.