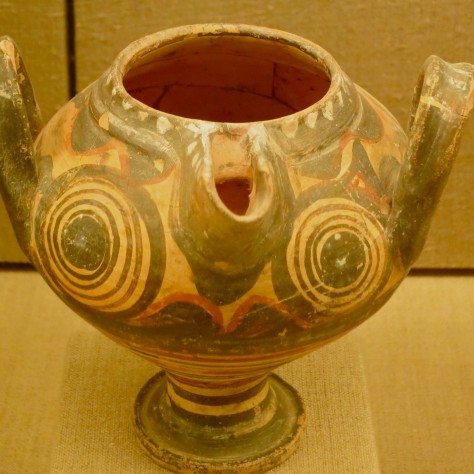 This piece of pottery is one of my favorites on display at the Museum of Historic Thira on Santorini. I like to believe that the Minoans of Akrotiri had a sense of humor. Note the red lips.

The small Museum of Historic Thira is definitely worth a visit if you are on the Greek island of Santorini. Located in the town of Fira, it’s mission is to trace the development of prehistoric Thira from 3000-1600 BC by displaying artifacts found in the ruins of ancient Akrotiri. Before Santorini blew its top in a massive volcanic explosion around 1600 BC and buried the city under a sea of volcanic ash, Akrotiri was a center of a Bronze Age Minoan Culture second only to Knossos on Crete.

Picture hot and cold water running water, indoor bathrooms, two and three-story buildings, beautiful frescos, intriguing pottery, weights and measures, and a fleet of ships that delivered cargo throughout the known world of the time. We are fortunate that many of these artifacts have been preserved under the volcanic ash, which makes Akrotiri similar to Pompeii. Unlike Pompeii, no bodies have been found in the ruins. Apparently the Minoans were given ample warning to escape.

This fresco is one of many that lined the walls of buildings in Akrotiri, Santorini is close to 4000 years old.

Excavations of the ruins, which are located on the southern part of Santorini, began in 1957 and continue today. Only a small portion of the city has been uncovered. Because of its level of civilization combined with the fact that it disappeared, there is speculation that Akrotiri may have served as the inspiration for the myth of Atlantis.

Plato mentioned the fabled city around 360 BC. He described it as an ancient civilization existing some 9000 years before his time that was buried under a flood of water. Modern archeologists suggest that the 9000 years may have been mistranslated from earlier Egyptian accounts and actually be 900 years, which would put the destruction of Atlantis right around the time Akrotiri met a similar fate. Substitute an ocean of ash for a sea of water and there is ample room for the speculation. Buried is buried. We will probably never know the truth.

The volcanic activity that brought Akrotiri to its spectacular end continues to be a fact of life on Santorini, however. “Santorini Bulges as Magma Balloons Underneath” a September 12, 2012 article in National Geographic news reported. Somewhere between 13-26 million cubic yards of molten rock were filling the magma chamber located directly under the sea where our cruise ship was anchored! The Crown Princess did not cover the bulge in its newsletter. Apparently, there is no imminent danger… at least to speak of.

Here’s another favorite Akrotiri artifact of mine. It’s called a nipple ewer (or pitcher) for obvious reasons. This one comes with tiny breasts, ear rings and a beak. Archeologists speculate that the ewers may have had religious significance. My wife Peggy, always practical, suggests that may have been used like baby bottles.

Another nipple ewer. This one featured a swallow. Both wild and domestic animals were featured prominently on Akrotiri artifacts. The yellow color, BTW, is because of the lights used by the museum to protect the ancient works of art.

I found this elongated double pitcher with its leaping dolphins to be quite graceful.

This reconstructed storage container features a bull that appears to be mooing quite loudly. 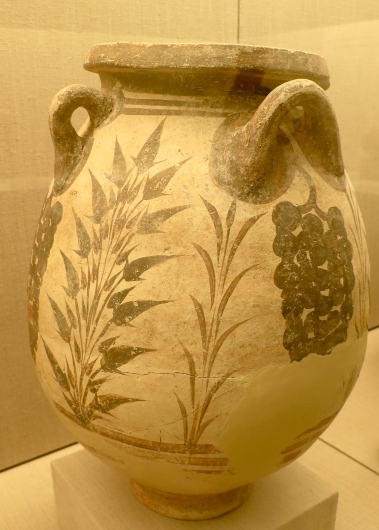 Much of the pottery found in Akrotiri also features common crops grown by the Minoans. The grapes on this jar reflect the wine industry that has been in existence on Santorini for over 4000 years.

The Museum of Historic Thira also displays a number of small figurines such as this bull.

For those who like to attribute alien influence to the development of Atlantis, I will end my photos of artifacts from Akrotiri with this piece (grin), possibly as old as 2700 BC. 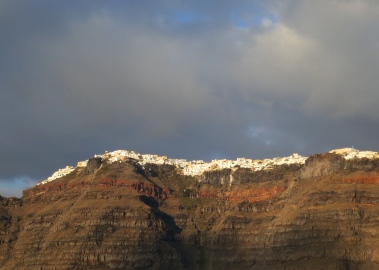 As we returned to our ship, which was anchored above the bulging lava chamber, we had a final look at the towering cliffs of Santorini with their beautiful white villages perched on top.

A beautiful sunset greeted our ship as we headed out to sea and our next adventure.

NEXT BLOG: I continue my travel blog on the Mediterranean with a visit to the second largest city in the Roman Empire, Ephesus, which is located on the Turkish mainland.

8 thoughts on “Santorini’s Akrotiri: An Impressive Ancient City… but Is It Atlantis?”