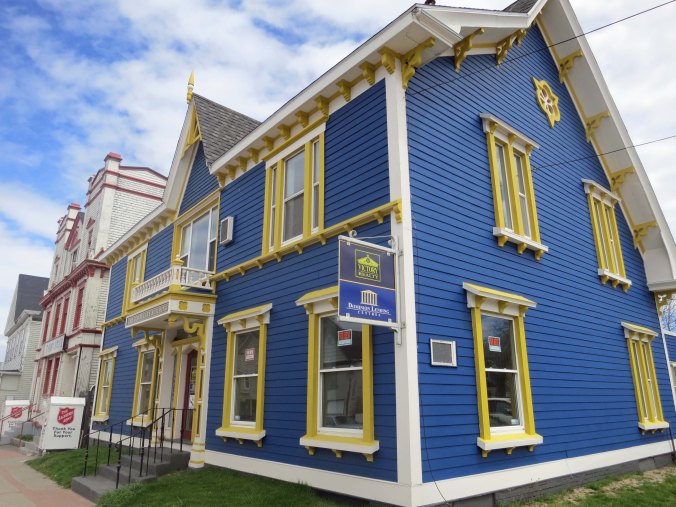 After three months of bicycling, I left the US and entered Canada. This is a photo of the Consulate Building in Yarmouth, Nova Scotia.

In my last post, I had arrived in Winchester, Virginia on my 1989 bike trek and decided I needed to make up for some lost time and give myself a break from bicycling by taking the Greyhound bus to Bangor, Maine.

I was lucky to find the Greyhound bus depot, a motel, and a bike shop all within a few blocks of each other in Winchester. The bicycle shop gave me a bike box, which I hauled back to my motel room. I recruited a trashcan newspaper to cover the floor. Motels have little tolerance for bicycle grease (understandably), and I had a bike to dismantle. Handlebars, pedals, seat, and front wheel had to come off.

While spreading the newspaper, a headline caught my attention. Zsa Zsa Gabor had been arrested for slapping a Beverly Hills motorcycle policeman who had stopped the 66-year-old in her $215,000 Rolls Royce. Apparently Jack, as in Jack Daniels, had been involved in the altercation.

I’ve traveled by Greyhound several times in my life, starting as a child. There was a local bus we had used a few times that connected Diamond Springs and Placerville (three miles away). The bus driver’s name was Pat, which I remember because I named a stray dog after him. The dog had been wandering our neighborhood for weeks, catching an occasional jack rabbit or ground squirrel for food. My mother had watched the stray grow thinner and thinner until one day she stopped the family’s well-used car, opened the door, and invited it home for a meal. Since the dog was part greyhound, I promptly named her after the bus driver. Pat was happy with the name, eternally grateful for her food bowl, and became my faithful companion for several years. I am not sure how the bus driver felt about his namesake.

I wish I had taken more notes about my bus trip from Virginia to Maine. Traveling by Greyhound is always an experience. But I was so happy for the break from peddling, I just sat back and watched the scenery fly by. Going uphill faster than five miles per hour seemed almost unreal. I do remember that I had a layover in Washington DC that I used to visit the National Art Gallery. I was lost for several hours among the Van Gogh’s, Picasso’s, Rembrandts, and Dali’s.

I also remember I had a four-hour layover in New York City from 1:00 a.m. to 5:00. Being in any Greyhound station in the middle of the night is memorable. Multiply that by 10 for downtown NYC. I watched in awe as homeless people, hookers, beggars, and, quite possibly, vampires, zombies, and an alien or two claimed the station as their own. I was careful to mind my own business and kept my gear within easy reach. Other than distributing ‘spare change,’ and passing on an offer from a scantily dressed lady, I was left alone to wonder about the nature of my fellow denizens of the night.

Morning found me on my way to Boston, Massachusetts through Connecticut and then through New Hampshire into Maine. Having stayed awake at the NYC bus station, I was in desperate need of a nap, but New England was far too interesting for sleep. Strong coffee helped keep my eyes open for most of the journey. Arriving in Bangor, Maine I quickly found a motel and slept for 12 hours. 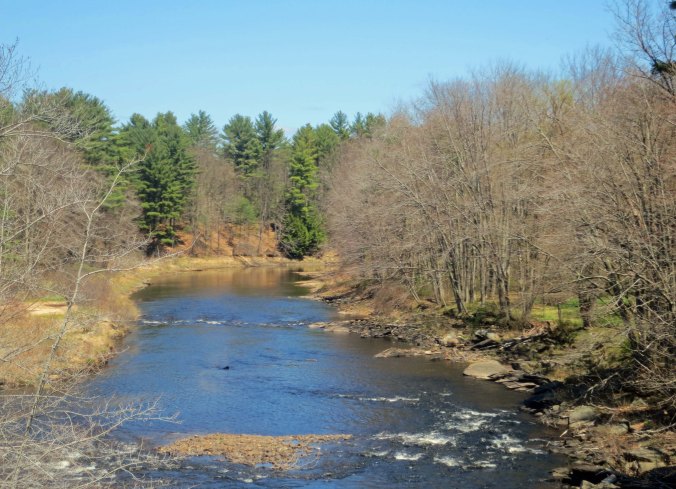 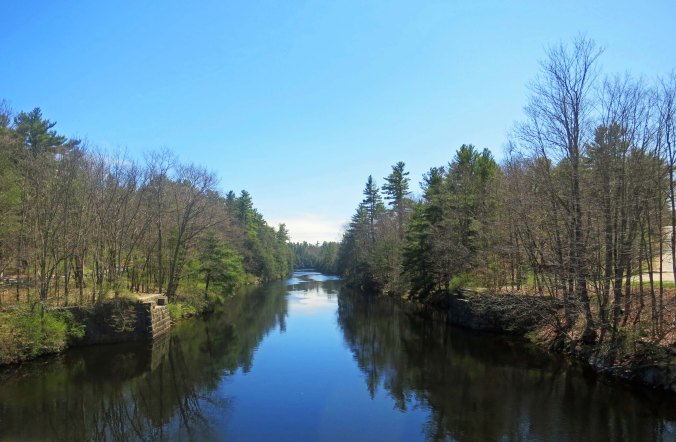 And this dark beauty.

Houses, especially older ones, tend to be big. Imagine yourself cooped up with a large family over winter. These three structures are all connected and are part of the house. 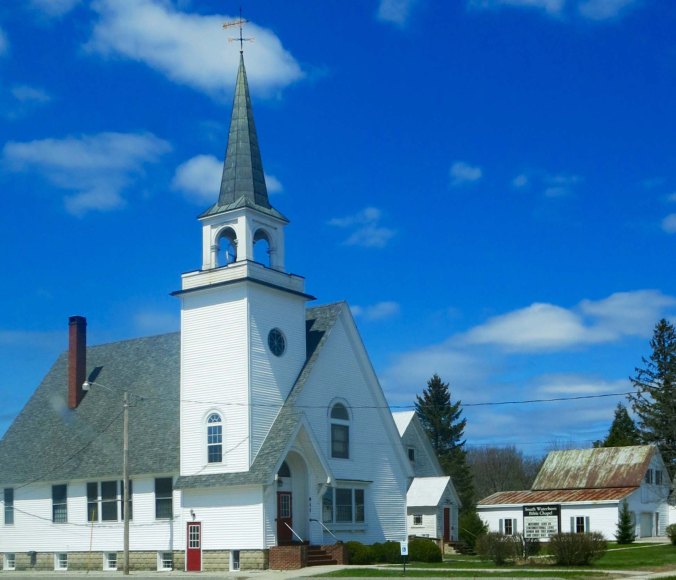 I wonder how many Christmas cards over the years have featured a New England church like this one surrounded by snow and a small village. 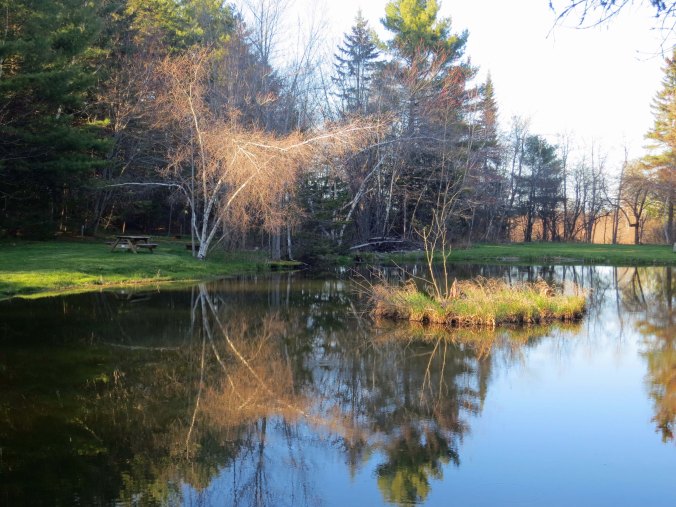 A pond in Bangor provided me with a reflection shot.

I had been in Maine once before. In 1976, my first wife, Jo Ann, and I had taken a year off to travel through the South Pacific and Asia. But first we had bought a VW Camper Van and made a leisurely trip across the US with our Basset Hound, Socrates. My friend Morris had volunteered to keep the dog while we traveled overseas. After dropping Soc off with Morris and his wife Marianna, we had hung around for another week and backpacked on the Appalachian Trail in Maine. I wanted to make sure that Morris and the dog were compatible.

It had been a long week for us with 24/7 rain, muddy trails, black flies, mosquitoes and no-see-ums. It was much easier for Morris and Socrates. They had bonded instantly and apparently had a grand time. Upon our return from the backwoods, we had received a couple of wags from Soc before he returned to drooling over whatever treats Morris was offering him. Food had always been an important factor in determining the dog’s loyalty.

I had thought about Socrates when I woke up from my 12-hours of sleep in Bangor and put my bike back together. Shortly after breakfast, I was on Highway 1 making my way toward Bar Harbor, Maine and Acadia National Park. It was a short trip, hardly longer than 50 miles. I was there by early afternoon and settled into a campground.

You might wonder why I would feature this Dunkin’ Donuts sign I found outside of Bangor on the way to Bar Harbor. The reason is I never passed up a donut shop on my trip! I’d look like an elephant if I did that now.

I promised myself I would do absolutely nothing for a week while I waited for my friends Jean Snuggs and Lyndell Wilken who were going to bicycle around Nova Scotia with me. It almost worked— and would have except for two things. One, I had a responsibility to catch mosquitos with my hands and squash them before they landed on me and started to suck my blood. Given how numerous and hungry they were, I pursued this responsibility with passion.

Second, I discovered David Eddings’ series of five fantasy books on the Belgariad in a small bookshop a few miles from my camp. I’d picked up the first one and become hooked. I found I could hold a book in my left hand while squashing mosquitos with my right. Needless to say, the days passed quickly and soon Jean and Lyndell had arrived at my campsite, smiling and eager to catch the ferry to Yarmouth, Nova Scotia, which we did. Since our goal was to bike the northern part of the Province, we took a bus into Halifax. The Canadian part of my bicycling adventure was about to begin.

The entry to the ferry terminal in Yarmouth. 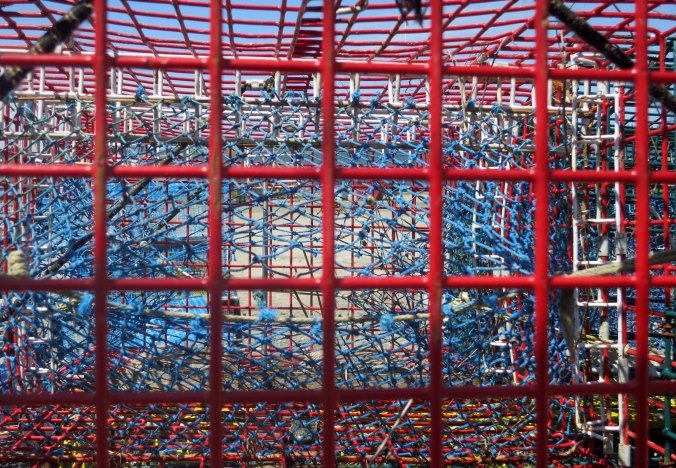 Crab fishing is important off of Nova Scotia and there must be thousands of crab traps such as this in Yarmouth.

Peggy makes herself at home on furniture made out of crab traps next to a restaurant where we had dined on crab.

Yarmouth has done a good job of renovating historical buildings. This may be the fanciest Salvation Army Thrift Store I have ever seen. It is next to the Consulate building I featured at the beginning of the post.

This mural featured a number of inhabitants in the town.

While my bike journey took us southeast toward Halifax, Peggy and I also explored the west coast of Nova Scotia along what is known as the Evangeline Trail. A number of impressive Catholic Churches reflect the French Acadian history of the area. The road, which travels along the Bay of Fundy, noted for its extreme tides, is well worth a side trip.

We found this mysterious ‘road less traveled’ along the Evangeline Trail. 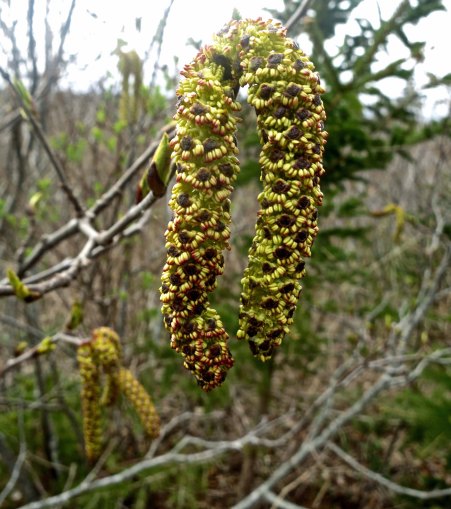 And this impressive Catkin.

Back on track, following the coast south out of Yarmouth, we came on this unusual Anglican Church, which represented Nova Scotia’s English heritage for me.

A small lake near Halifax provided a sunset shot…

…And a late evening view, which is an appropriate place to end today’s post.

NEXT BLOG: Bicycling north from Halifax toward Cape Breton Island.

34 thoughts on “From Winchester, Virginia to Halifax, Nova Scotia… The 10,000-Mile Bike Trek”