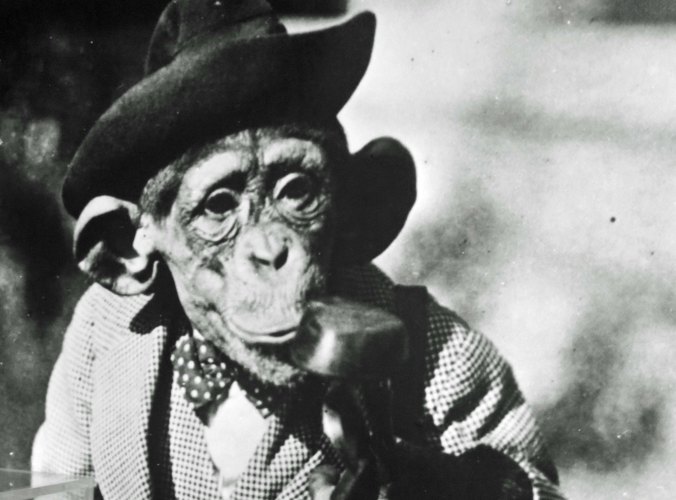 Speaking into an old-fashioned microphone, a monkey reports on the Scopes 1925 trial on teaching evolution in Dayton, Tennessee. I found this photo in the museum of the courthouse where the trial took place.

My father once told me that the world was 6,000 years old and that evolution was “a bunch of hooey.” Those were his exact words. He hadn’t always thought this way, but he was in his mid-80’s and the Pearly Gates were beckoning. His occasional reading of the Bible had turned into a full-time passion. He didn’t acquire this viewpoint from the Bible, however. He got it direct— from a radio preacher, a man he regularly sent generous donations to from his meager social security income.

I thought of this as I bicycled up the steep ridges of the Cumberland Plateau and passed by rocks that dated back 500 million years. And I thought about it even more as I biked on toward the town of Dayton, Tennessee. Dayton was the site of the famous Scopes Trial where William Jennings Bryan and Clarence Darrow had gone toe to toe in 1925 over whether evolution could be taught in the public schools of Tennessee. The trial turned out to be a media circus, a first-rate dog and pony show, or, maybe I should say, a man and monkey show. Trained chimpanzees performed on the courthouse lawn. 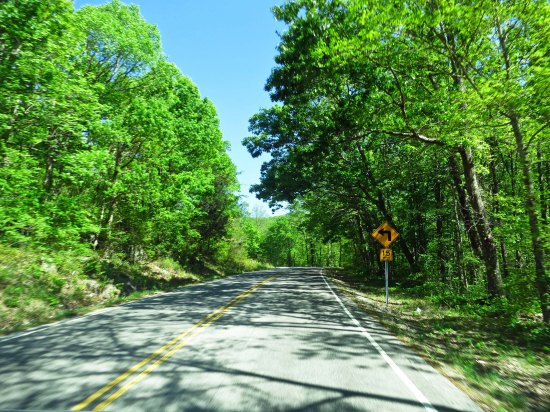 The rocks along Tennessee Highway 30 as it climbs up on to the Cumberland Plateau in Tennessee are 500 million years old, or 6,000 if you accept the Bible account.

I started this particular section of my journey through Tennessee at Old Stone Fort State Park near Manchester. It’s a delightful place perched between deep gorges carved out by the Duck and Little Duck Rivers. Indigenous people in the area took advantage of its location to build what archeologists think was a ceremonial center over 1500 years ago. In the early 1800s, Americans discovered that the quick flowing Duck River was ideal for running water-powered mills. A gun powder mill was operated at the location during the Civil War to supply Confederate armies, until Union Troops destroyed it.

All that remains of the 1500 plus year old Native American ceremonial center at Old Stone Fort Park is this peaceful meadow.

An ancient earthen wall, seen on the left, surrounds the ceremonial center. Visitors are invited to stroll along this pleasant wooded path around Old Stone Fort. 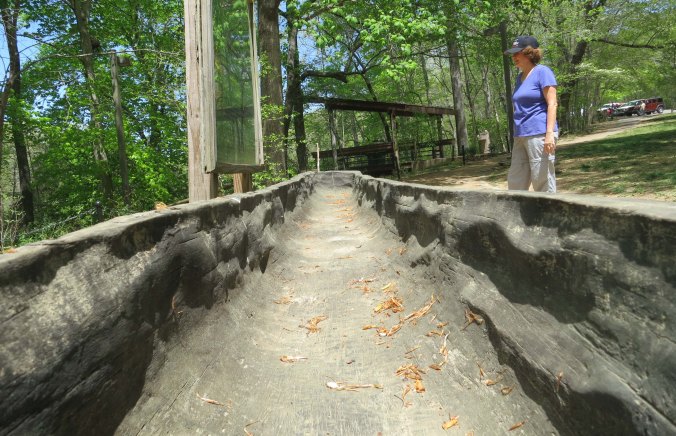 Peggy checks out a replica of a dugout canoe that Native Americans would have used in the region. Fire was used to hollow out these canoes. 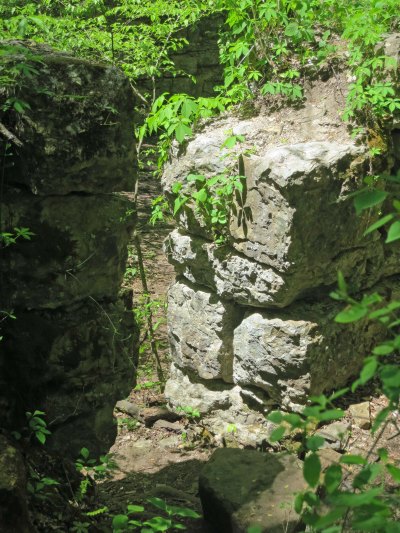 All that remains of a water-driven mill at Old Stone Fort. The mill supplied paper for a number of Southern newspapers.

The interesting history of the park is matched by its beauty. Multiple waterfalls are created as the rapidly descending Duck and Little Duck Rivers cascade over ledges made of limestone.

One of several beautiful waterfalls found on the Duck River of Tennessee as it flows through Old Stone Fort State Park. 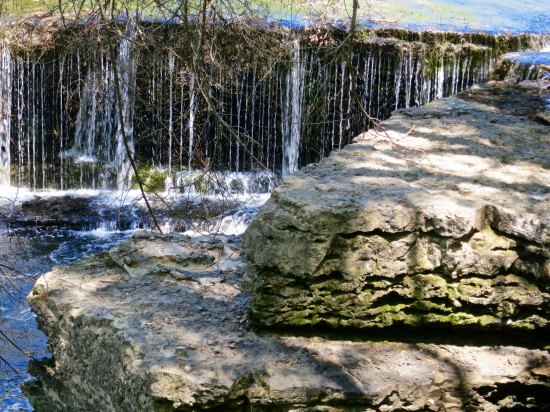 I was reluctant to leave, but the open road called. I followed Tennessee State Route 55 out of Manchester and on toward McMinnville. For those of you into music, Manchester is the site of the Bonnaroo Music and Arts Festival, which attracts tens of thousands of fans annually. It is like a modern-day Woodstock or, if you will, a musical Burning Man. Attendees camp out for four days on a 700-acre farm.

The ride into McMinnville was relative easy in terms of terrain. This was about to change. In McMinnville, I picked up Highway 30. A look at a map of eastern Tennessee will show that most roads in the region follow a north-south direction. There’s a reason. Fast flowing rivers running south off of the Cumberland Plateau have cut deep valleys, leaving behind high, steep ridges. It’s a lot easier to build roads following the river valleys than it is to scramble up and over the ridges. 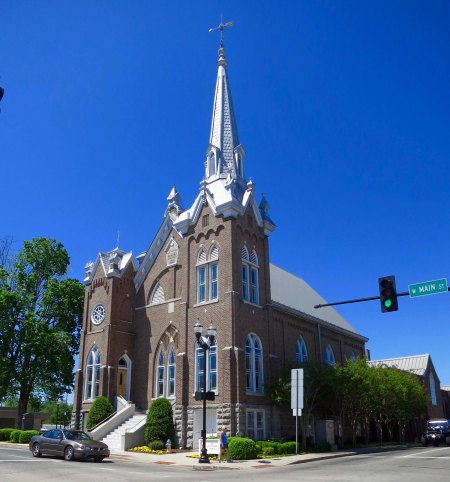 McMinnville is an attractive town which includes, among other things, this striking Methodist Church built in the 1800s.

I was particularly impressed with the steeple. It would be fun to check out the view from the upper windows.

These street lamps added a feel of authenticity to McMinnville’s Main Street running through the revitalized historic section of town.

Peggy and I found this shop in McMinnville and I had to post a photo: A music store that sells ice cream and guns! What can I say…

Highway 30 outside of McMinnville going east provided a hint that I was entering the hilly terrain of the Cumberland Plateau. Here I was dropping into a creek canyon. I would soon be climbing toward Spencer.

An old barn I found along the highway. 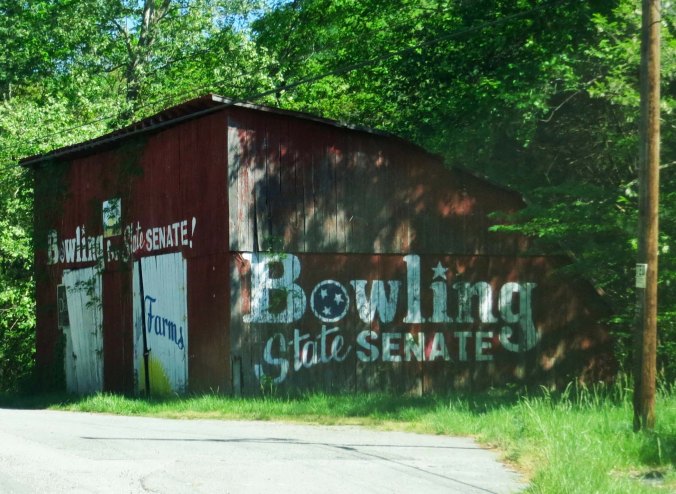 Although this was from a recent political campaign, I found it interesting. Long before billboards lined the highways of America, advertising was done on buildings.

Spencer was named for one of the longhunters of the 1700’s who made their way from Virginia into the wilds of Kentucky and Tennessee. I used to think they were given the name for the long muskets they carried, guns that they were amazingly accurate with— as the British were to learn. (They also shot at the Red Coats from behind trees and rocks, which wasn’t considered fair in the European wars of the times. You were supposed to walk at each other in long lines wearing bright uniforms and be mowed down like real men.)

I later learned that they were named longhunters because they went on long hunts. Duh. Daniel Boone was one such fellow. He’d be away for months at a time, only to return home long enough to get his wife pregnant before taking off again. Poor Rebecca was left behind to tend the crops and kids. Pioneer women were tough. But they could also get lonely. Once, when Boone was captured by Indians and was away for a couple of years, he returned home to find Rebecca with another baby. It looked a lot like his brother. Legend has it that Daniel was heard to mutter, “Well, it’s best to keep it in the family.” 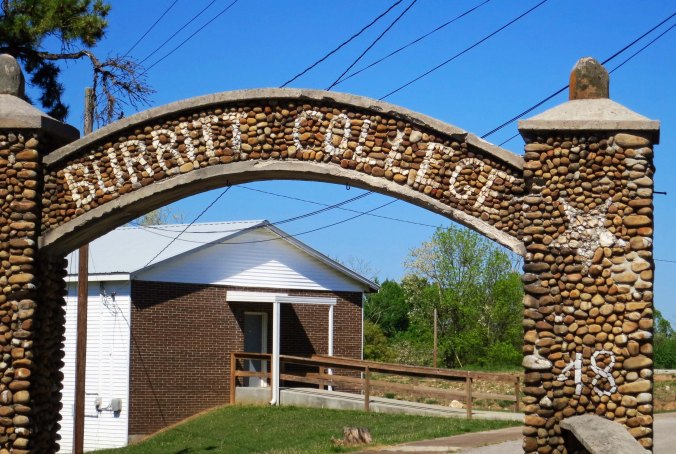 The gateway to Burritt College in Spencer. Closed in 1939, the college now has a Facebook Page. Doesn’t everyone?

There had been a college in Spencer at one time, which surprised me. It’s a small town. The gateway still stands. I decided to do some research. Burritt College, it turns out, was founded in 1848 as one of the first co-educational colleges in the South. At the time, putting young men and women together created a bit of a firestorm. They weren’t to be trusted. Who knows what temptations the devil might send their way? To solve the problem, the college adopted a strict moral code. Members of the opposite sex could only communicate with each other during class and at supervised events.

The students weren’t supposed to cuss, gamble, smoke or drink either. The latter presented a bit of a problem. This was moonshine country. The guys couldn’t resist an occasional sip, or several. Out of frustration, the president of the college went to the sheriff and asked him to destroy all stills in the area. He learned a valuable lesson: You don’t get between a Tennessee moonshiner and his still. The President’s house was burned down.

I made it through Spencer without running into any irate moonshiners, but I was soon to have personal encounters with a big, ugly dog and a speeding 18-wheeler. Those are stories for my next blog, however. I’ll also report in greater detail on the Scopes Monkey Trial, as the renowned journalist, H.L. Mencken, dubbed it.

NOTE: I occasionally post this reminder since new people regularly check in on my blog. In 1989, I did a six month solo bicycle journey around North America. This past spring, my wife Peggy and I re-drove the route. Most photos on these blogs about the trip were taken this spring.