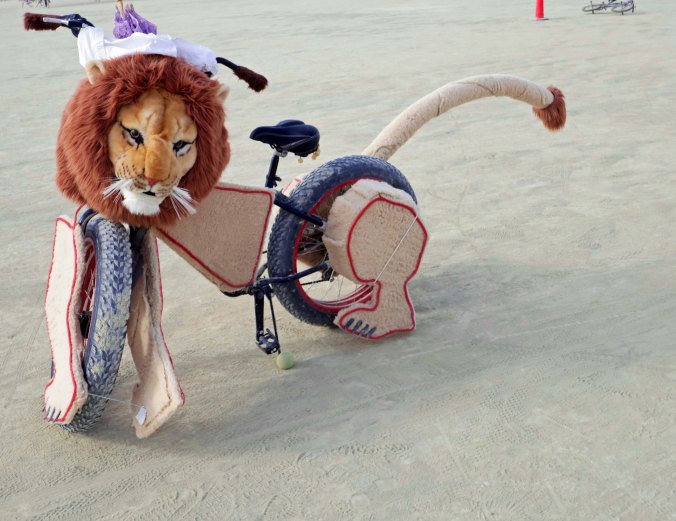 This lion was one of the more uniquely decorated bikes I found at Burning Man 2015. The tires are perfect for the Playa.

Almost everyone has a bike at Burning Man, even the folks with mutant vehicles. How else are you going to make your way down to the neighborhood bar, or the Center Camp Café, or the Man, or the dance venue out on the edge of Black Rock City when you have an itch to travel and your only option is walking— for miles. That means that there are well over 50,000 bikes running around in the desert. I wouldn’t be surprised if the number were closer to 65,000.

There are no skinny tires at Burning Man, or, if there are, the Virgin Burners who brought them won’t make the same mistake twice. Playa dust sucks up skinny tires like quicksand sucks up wayward cows. You and your bike may not disappear, but you are guaranteed to come to a screeching halt in deep dust, and possible even earn a dust bath. Most bikes also share another quality. They are dirt-cheap. Dirt seeps into everything. It is not the place for your $1000 bike, or even your $500 bike. I am talking Wal-Mart cheap.

When I first journeyed out to the Black Rock Desert, my friend Ken Lake brought along hobby horses to fit on our bikes.  (A hobby-horse is a long stick with a horse head on one end; you’ve probably seen them in kids stores like Toys-R-Us.  Maybe you have even jumped on one and yelled Hi-Yo-Silver-Away. I have.) Ours came with sound effects. Pinch their ears and they would make trotting and neighing sounds. The hobby horses were meant as a decoration, but they also served a more practical purpose: to help us find our bikes when hundreds of others looked just the same.  In honor of the horses we decided to call ourselves Horse Camp. Naturally we had to name our horses. I chose Horse with No Name after the lyrics of 70s song released by the band, America.

I’ve been through the desert on a horse with no name— It felt good to be out of the rain— In the desert you can remember your name— ‘Cause there ain’t no one for to give you no pain. 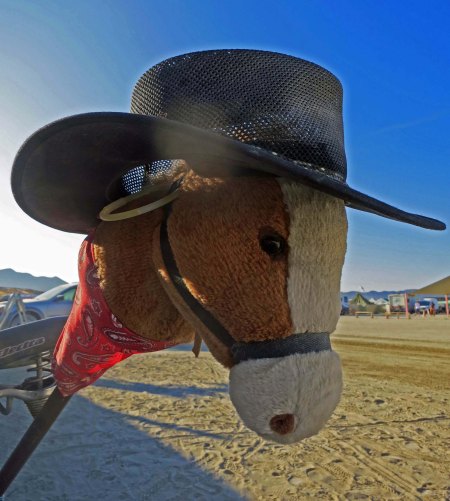 Horse with No Name tries on my hat. The yellow circle under the hat was one of the many glow sticks he was wearing the night before to avoid becoming a statistic.

Following along with the horse camp theme, I adopted “Outlaw” as my Playa name. The two names just seemed to fit, plus they both have a rather illusive quality I like.

Not all burners decorate their bikes, but most have at least something on them to aid in identification. Here are some decorated bikes I found  at Burning Man 2015.

This pirate had outfitted his bike with a cannon. (Photo by Don Green.)

A family of owls roosted on the handle bars.

I don’t have a clue as to what these white poles represented but they sure made the bikes easy to find.

So did the lamp shades.

And how about these animals? It looks like someone robbed a toy store, or maybe their kid’s room. This is a tricycle, BTW.

Now, if I only had someone to pedal me around… 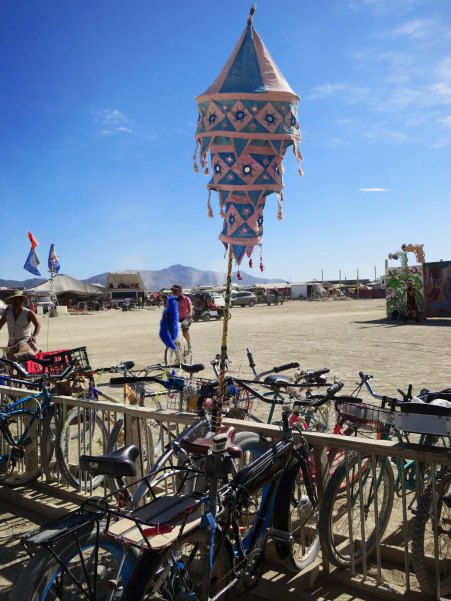 I am thinking Pagoda here. 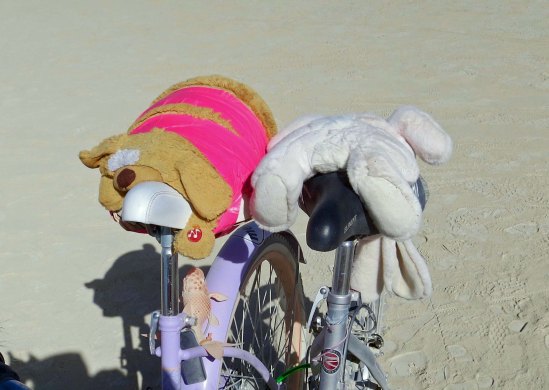 If you have never biked, or haven’t biked for quite a while, your crotch may be in for a real treat. Trust me on this one. I’ve been there. These folks (and their highly abused rabbit and dog) have done what they can to counter the pain. 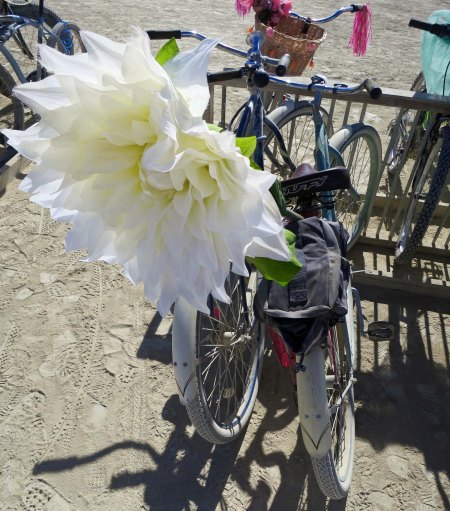 I will conclude with this gigantic flower. Join me in my next blog as I go on a Burning Man walk-a-bout.