Looking out from the Center Camp Cafe through the Bike Bridge, a sculpture by Michael Christian of Berkeley, California. The work was done in collaboration with twelve young women from Oakland who were taught welding skills and then worked with Christian in creating the sculpture out of recycled bike parts.

You journey into another world when you travel to Burning Man. An open mind helps. You don’t have to party to the wee hours, or get naked, or do yoga in your underpants, however. People are free to choose the activities they wish to pursue. I mean, if you really want to know how to make a flogger out of duct tape, you can— or not. I opted out.

Besides, I have my own whip. I used to break the whip out and walk around my office cracking it when I was the executive director of a non-profit in Alaska. I did this during the winter months when the nights were long and the days were short. Since it was dark outside, the people who worked at the bank across the road would line up at their windows and watch me. The bankers, my staff, and I enjoyed the break in routine. Or, at least, no one ever reported me to the cops.

A view of the Center Camp Cafe from the Playa. Note the tower on the right.

Looking down from the tower at Center Camp and the Center Camp Cafe. (Photo by Don Green.)

A view of the Center Camp Cafe at night. The flags on top can be seen from throughout Black Rock City and are used by Burners as a land mark.

Over 60,000 bikes were at Burning Man this year. On any given day, the Center Camp Cafe was surrounded by them. Note the fat tires. There are no skinny tires at Burning Man since getting around through the dust on the Playa and in Black Rock City would be impossible.

The middle of the Center Camp Cafe provides a large circular opening for  looking up at the sky and the flags.

Heading over to the Center Camp Cafe is something that almost everyone at Burning Man does at some time during the week. It’s a great way to be introduced to and participate in Black Rock City performance art. Free entertainment of one sort of the other goes on around the clock at the Cafe’s two stages. Less formally, anyone is welcome to perform in the large, circular center stage. I watched ballet dancers, jugglers, couples yoga, a woman work a hula-hoop, and a group practicing what I called chicken meditation since it sounded like they were shouting chica, chica, chica and making chicken moves. But what do I know; it looked like fun. Then there was the wild-looking guy who disappeared into a large yellow balloon…

It appears this woman is learning to fly as she practices couples yoga at the Center Camp Cafe.

A young woman works her hula hoop as blonde hair flies. Whole camps are devoted to mastering the hula hoop and Burners have developed considerable skills.

A young man who had been practicing impressive ballet leaps, suddenly stopped and asked an elderly woman to dance with him. The two bowed to each other and then waltzed off across the floor to applause. Batman looked on. 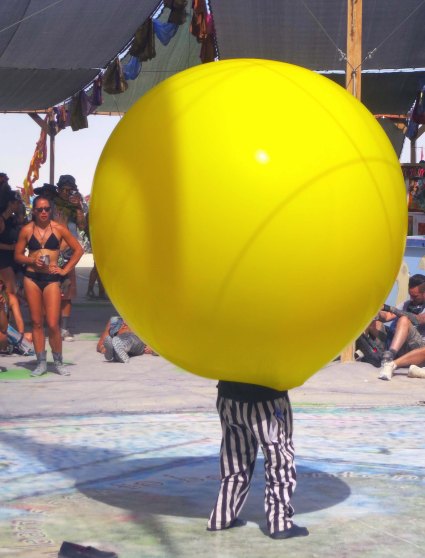 Peggy and I were sitting and chatting with a man from Berkeley when a guy with a large yellow balloon walked out to the center area. By the time I had grabbed my camera, half of the man had disappeared into the balloon. Then he was totally gone. As things progressed, first his hair and then his head appeared out of the top.

In the end, the balloon shrank and I was able to get a full head shot. He was pretty wild looking, even for Burning Man.

People watching receives an A plus rating. A stroll around the Center Camp Cafe usually calls for another stroll, and then another after that. Or you can just choose to sit and let the parade pass by. Many Burners dress up in elaborate costumes, or dress down (way down) for their visit. I confess to enjoying it all.

My favorite Burner in her snazzy hat (Luna AKA Peggy) wears a Mona Lisa smile.

This photo strikes me as pure Burning Man. A younger man-made space for an older woman and the two were soon involved in an animated conversation. Meanwhile, an obviously tired Burner had put his feet up on the seat back so he could snooze. I kept waiting for him to go to sleep and his feet to drop. It didn’t happen.

Burning Man is a photographer’s dream. And almost everyone takes pictures. If each Burner took only 20 photos, well over one million pictures would have been taken at Burning Man 2014.

One of the best places to catch some of Burning Man’s wilder costumes is to attend the annual fashion show hosted by the Center Camp Cafe. While it may not be New York or Paris, it does come with a runway. (Photo by Don Green.)

What some of the best dressed models chose to wear. Size matters when you are wearing gloves. (Photo by Don Green.)

Art also fills the Center Camp Cafe, as it does all of Burning Man. Peggy and I visit at different times of the day to catch how the different light impacts the art, enjoy the shows, and sip a cup of coffee or glass of ice tea. Center Camp Cafe is the only place in Black Rock City where you can buy anything besides ice. 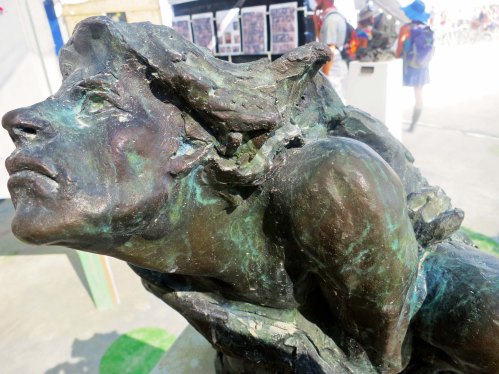 There must have been upwards to 40 pieces of art at the Center Camp Cafe including this beautiful sculpture.

The two cats who have caught Grandpa Mouse promise him his freedom if he reads them an amusing story.

I really enjoyed the Eastern oriented environmental art that combined nature with people at the Center Camp Cafe. Following are several examples. 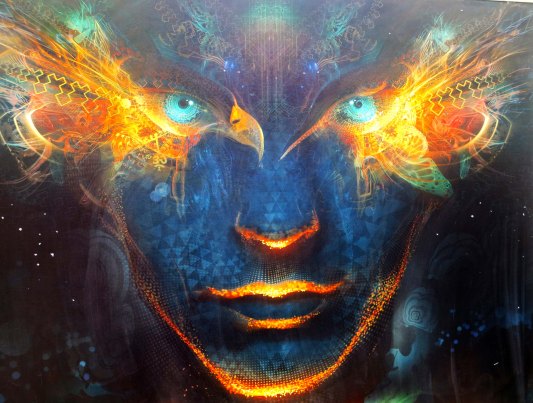 Dragon faces off against hummingbird. 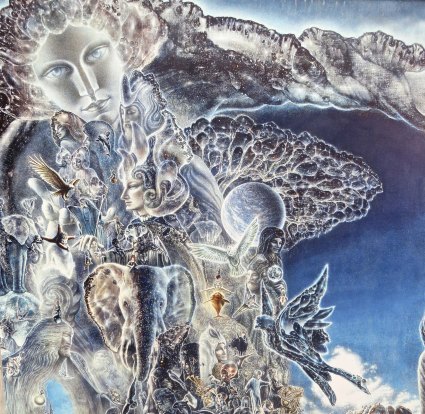 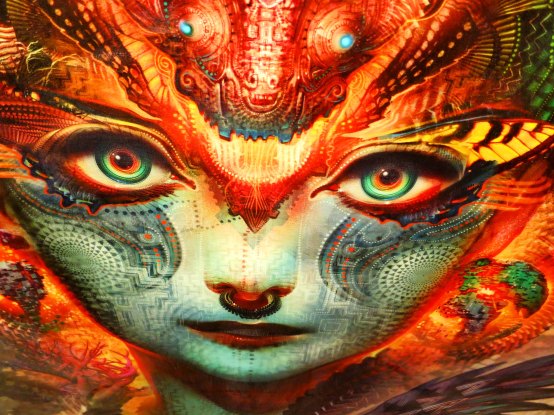 I conclude with this woman surrounded by animals. Next blog: We go out into Black Rock City and out into the playa in search of my favorite mutant vehicle: El Pulpo Mechanico— the octopus.