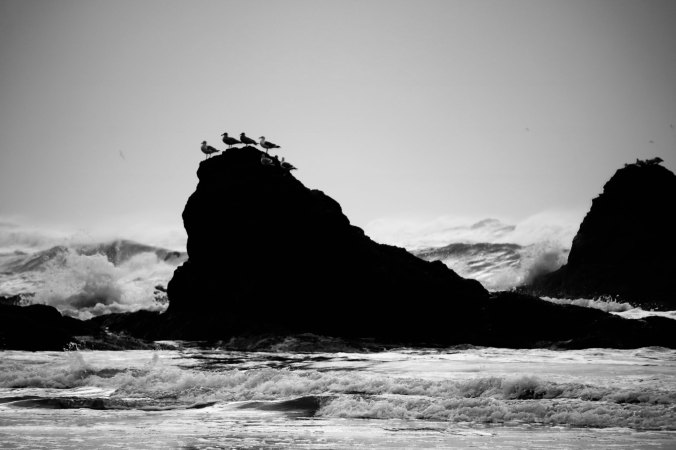 It’s wet up on the central coast of Washington, up where vampires and werewolves once roamed free. The small town of Forks— where Bella of Twilight fame was first smitten-bitten by her vampire lover— receives up to 10 feet (3 meters) of rain annually. The man at the small Visitors’ Center told us that he embraces the rain and loves it. But he was real estate salesmen selling visitors on his small town in hopes of selling a house. He showed us a telephone booth covered in moss. There was no question that the moss embraced the rain.

Peggy at (I’m not short) 5 feet 7 inches points out the amount of rain Forks had received by the middle of November.

The National Park people were going to trash this moss-covered relic of the past that once stood at the Hoh Visitor Center in Olympic National Park. Forks rescued it.

The woman behind the counter gave us a map that outlined where we could locate various places found in the three book/four movie Twilight saga. Peggy loves the movies, which means that I have had the opportunity to see them several times. They’re okay, but an angst-driven teenage girl torn between her love for a vampire and a werewolf is a bit outside my preferred genre.

A sign in the window of the Visitors’ Center. Bella represented the .5. 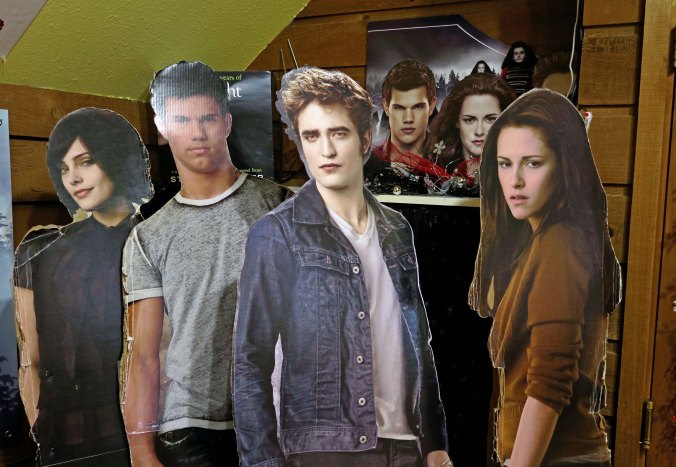 Cardboard cutouts of Victoria, Jacob, Edward and Bella from the Twilight movies greeted us at the Forks’ Visitors Center. Jacob was the werewolf and Edward the vampire, if you haven’t seen the movies. I found Victoria, also a vampire, a more attractive character than Bella. More humor; less angst.

This map of visitors from around the world suggested that Peggy wasn’t the only person with an interest in vampires and werewolves. As an aside, I prefer Bigfoot, who is also known to wander the area. He will show up in my next post on the area.

On the other hand, rainforests, rugged coastlines, and restless oceans call to me in a voice I can’t deny— even if I have to keep a wary eye out for supernatural beings. I’d hoped to take Peggy into the Hoh Visitor Center, which is located deep in the rainforest that makes up a significant part of Olympic National Park, but all of the rain had washed out the roads. That figures. We were left with visiting the jagged coastline that is part of Olympic National Park on a dark day that would have had vampires calling for more. Mainly, it just threatened rain and we were free to admire interesting rock sculptures, driftwood trees, seagulls, crashing waves, and tide driven spume (foam) that left white tracks across the dark sand. 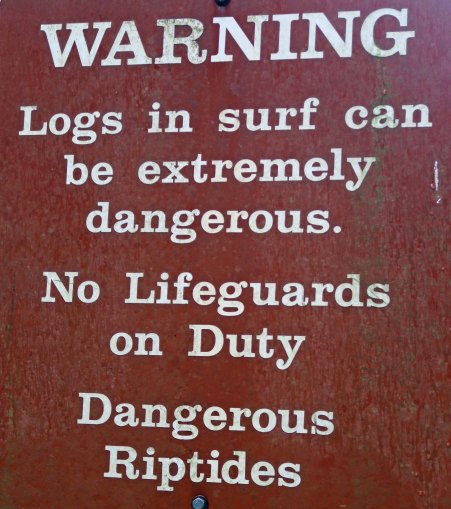 Really? Not that we were about to take a dip into the cold waters of the Pacific Ocean on a rainy day.

Peggy provides perspective on the ‘driftwood’ you might find out in the ocean.

I also decided that this massive root system wasn’t something I wanted to go swimming with. 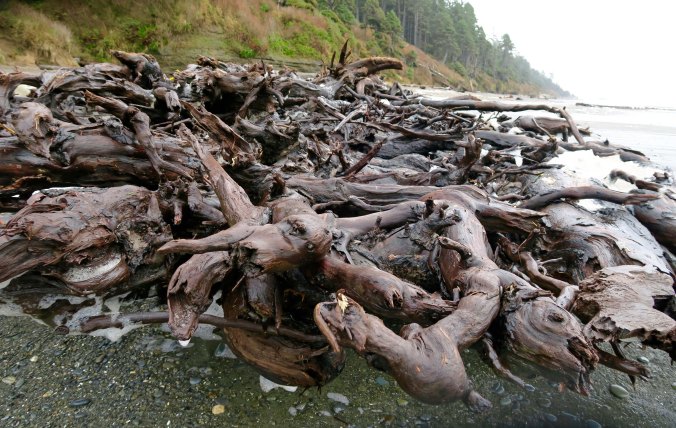 A close up of the roots.

This bridge made out of driftwood was quite ingenious.

Looking across the bridge. (Photo by Peggy Mekemson.)

Rocks tilted at odd angles had once been laid down flat on the floor of the ocean. Plate tectonics brought them ashore and tilted them upward. (Photo by Peggy Mekemson.)

These holes in the sandstone were carved by piddock clams using a rocking motion. There must have been lots of ‘rocking’ going on. Shake, rattle and roll! (Photo by Peggy Mekemson.)

A last look at Beach 5, and yes, the National Park Service has also named beaches 1,2,3,and 4. (Photo by Peggy Mekemson.) 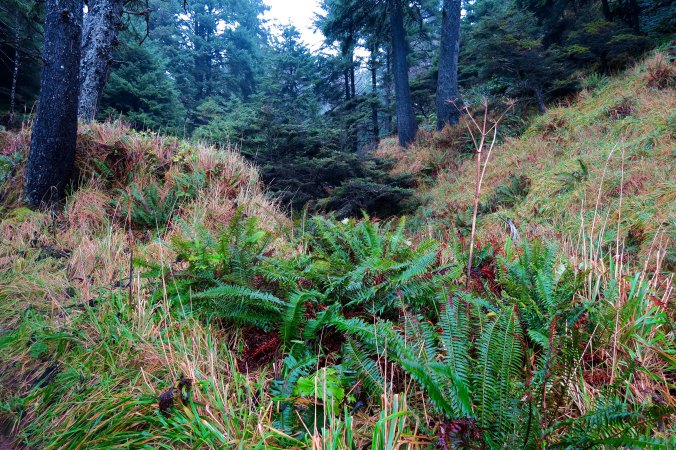 Walking back to the car from Beach 5, the luxuriant growth reminded us that we were in a rainforest.

As did this tree growing out of a stump. Such stumps are known as nursery trees and are common in the rainforests of the Northwest. 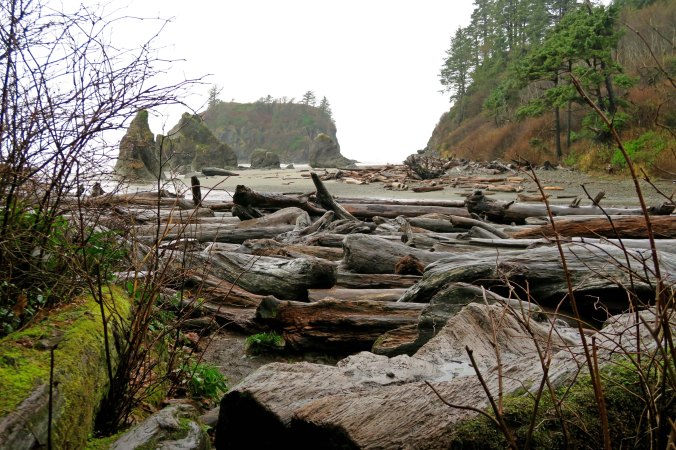 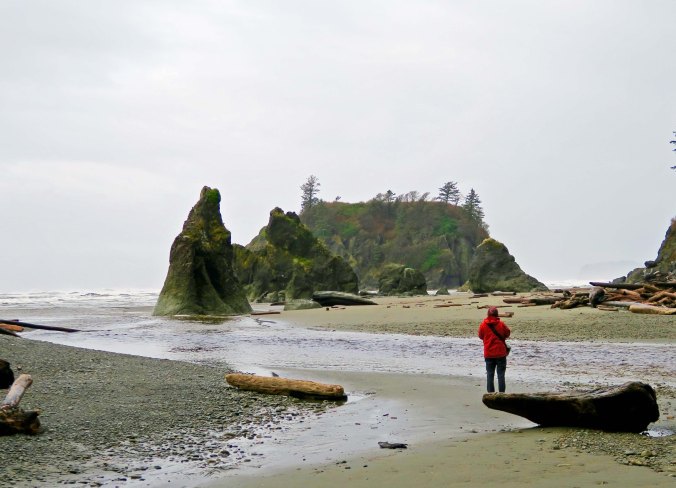 I caught this photo of Peggy admiring the rocks, which are known as sea stacks. They would have been part of the shore at one time.

The beach became more desolate to the south and seemed to stretch on forever at low tide. The grey skies prompted me to render these photos in black and white. 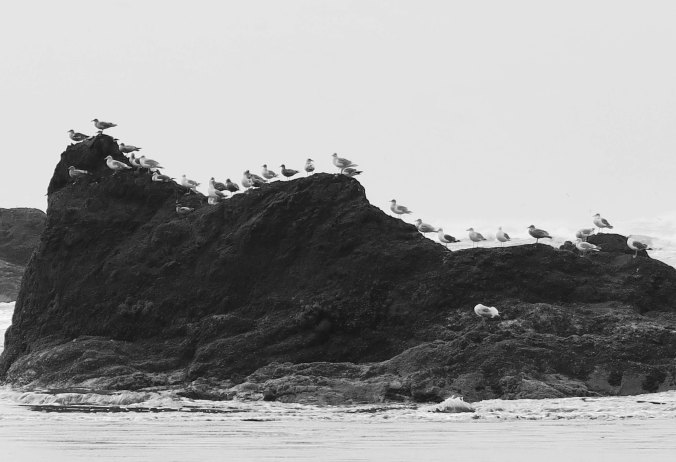 Coming closer, we discovered that the rocks were full of life. I was curious as to why the gulls lined up the way they did. 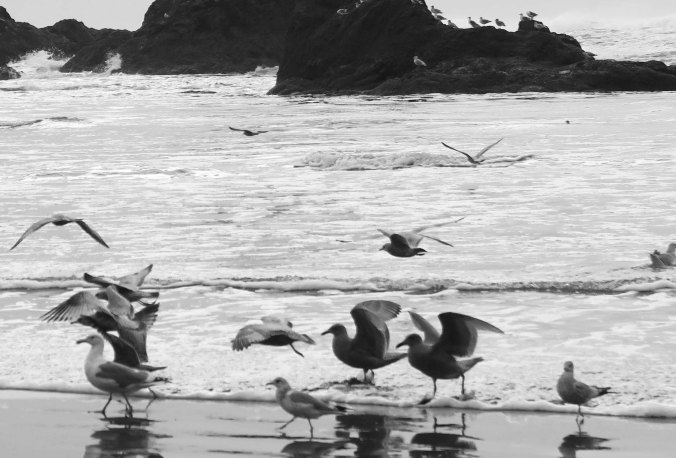 I like to walk up on them and encourage them to fly for action shots.

The one in the middle had decided to hoof it. 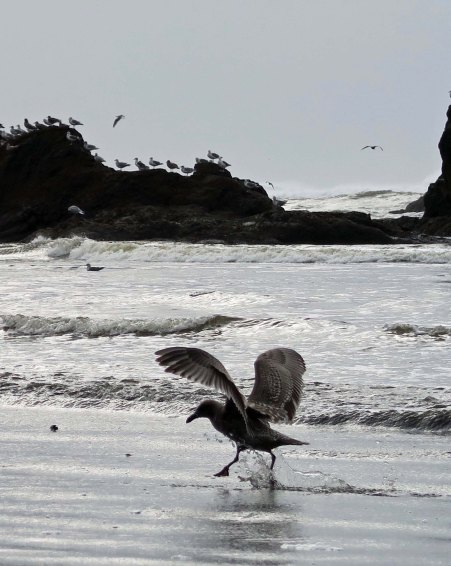 Until I got too close. I really like the pattern on the gull’s wings and the way it is kicking up water.

A pair of twin rocks asked for a photo.

As did this bird-decorated sea stack with a hint of sun. 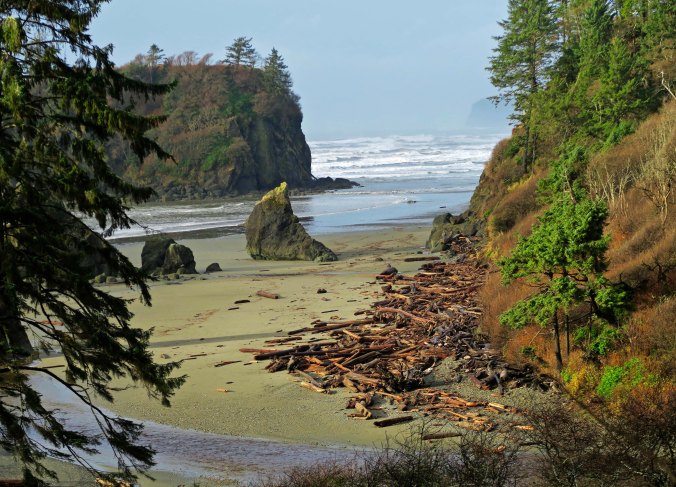 The sun peeked out just as we were leaving, giving a warmer feel to Ruby Beach and providing closure for this post.

WEDNESDAY: The second post on the beautiful island of Santorini.

MONDAY: Bigfoot is all over the Copalis Beach area but we missed the annual Sasquatch Conference.