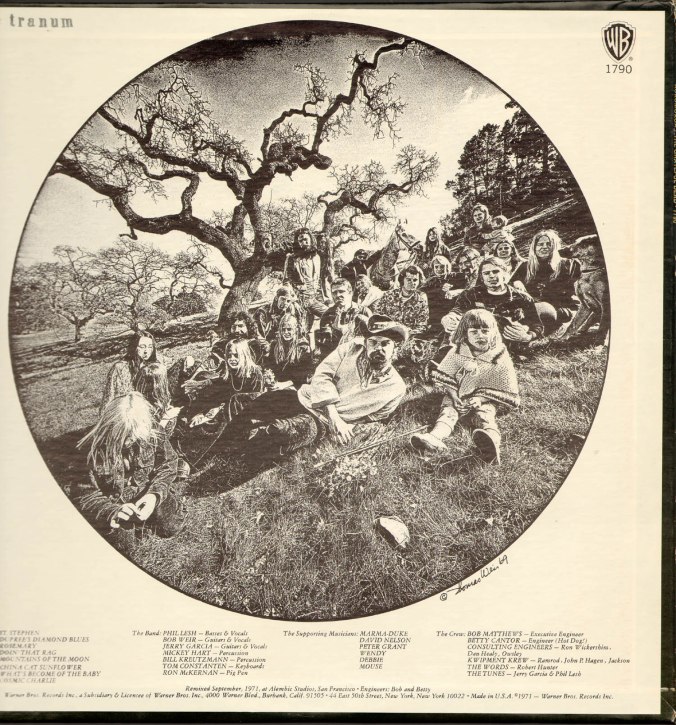 The Grateful Dead leased Olompali for the months of May and June in 1966 and visited the ranch several times over the next three years. In 1969 they returned for a photo shoot for the back cover of their album, Aoxomoxoa. Pigpen is lying in front. Jerry Garcia is on the left with the tree trunk behind him. In addition to the band, members of the Merry Pranksters and the Chosen Family Commune were also included in the photo. The blonde girl in the left front and the blonde girl sitting next to Garcia are the daughters of my brother-in-law Jim Hagedorn’s cousin, Paula McCoy.

“The (San Francisco/Haight-Asbury) Summer of Love began one afternoon at Olompali.” Ken Kesey, author of One Flew Over the Cuckoo’s Nest.

In my last post on Olompali, I mentioned that the Burdells sold Olompali in the early 40s. The purchaser, Count Harrington, had made his money dredging Pearl Harbor, an activity that was brought to a dramatic halt by the Japanese bombing in 1941. Desperate for dredging equipment, the US military paid him a small fortune for his dredges. He then used this money to purchase Olompali. Harrington, in turn sold the property to the University of San Francisco in 1948.

USF wanted to use the property as a Jesuit retreat but quickly discovered that maintaining Olompali was an expensive proposition. So they decided to sell, which turned out to be somewhat challenging. Buyers kept defaulting. At one point, USF was desperate enough to dig up the brick sidewalks and sell the bricks. For a brief time in the early 60s, the property was turned into an exclusive club with $5000 memberships. This effort failed as well, but it left a great swimming pool for the next inhabitants, The Grateful Dead. 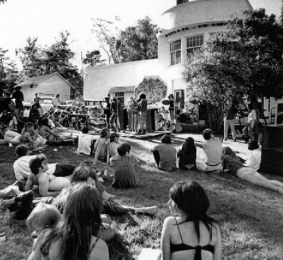 The Grateful Dead and other bands such as Quick Silver and Jefferson Airplane would set up in front of the Burwell Mansion and play free music for hours on end during their brief stay in May and June of 1966. (Archived photo.) 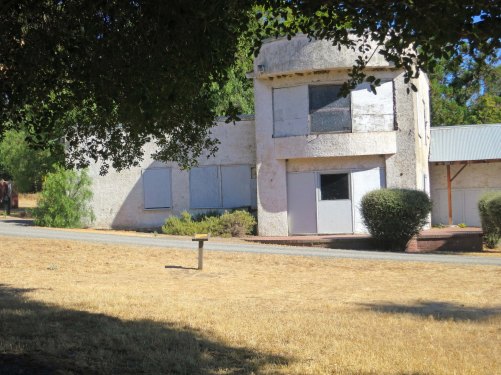 My photo of the mansion as it looked when I visited Olompali State Park in August. A fire gutted the building in 1969. I thought it was interesting that swallows still nested on the upper part of the mansion. (The dark dots.)

The best way to describe the Grateful Dead’s two month stay at Olompali in 1966 is to use a 60’s term: a happening. It was a continuous party that featured the early beginnings of rock music and a number of rock music legends. The Grateful Dead had formed a year earlier in 1965 from their initial band, The Warlocks, and Jerry Garcia was looking for a place where his group could hang out. A real estate friend turned him on to Olompali. The rent was reasonable and the property came with a large “Tara-like” house, a swimming pool, and gorgeous scenery. It was far enough away from everything that the band could play outdoors without disturbing any neighbors.

It was the type of place that demanded a party. An announcement sent out on May 22, 1966, invited the Dead’s friends from the Bay Area, “to an afternoon of inter-galactic travel, to a communion with the spirits of long dead Indians, to a dance celebrating mainly all of us.” It would be one of many parties. The ‘mainly all of us’ described a fascinating blend of musicians, promoters, poster artists, writers, film makers, beats, hippies and other alternative/creative types.

The original invitation to the Grateful Dead’s party. The swastika symbol, BTW, did not represent the Nazis. It was used by Native Americans to represent migration, thousands of years before it was picked up by Hitler. I’ve seen it on rock art throughout the Southwest.

Here’s how Garcia described the Dead’s stay at Olompali: “It was a great place. It had a swimming pool and barns and that sort of thing… We didn’t have that place very long, only about eight weeks. It was incredibly intense for everybody… Everything was just super-groovy. It was a model of how things could really be good… (It) was a firming up of the whole social world of rock and roll around here… The guys in Jefferson Airplane would get together with Quicksilver and different guys, 81 different players, would get together and get high and get loose and have some fun… That was when we started getting tight with Quicksilver… They came and hung out at our place in Novato when we had our parties. And a lot of people like the various filmmakers and writers and dope dealers. All the people who were into doing stuff. People who had seen each other at rock and roll shows…in that first year. Those parties were like a chance to move the whole thing closer, so to speak. It was good times – unselfconscious and totally free.”

Grace Slick dropped by, as did Janice Joplin, Santana, David Crosby, Moby Grape and even a five-year-old Courtney Love. But the gatherings went beyond musicians. Ken Kesey and the Merry Pranksters made their way to Olompali along with the LSD guru, “tune in, turn on, drop out,” Timothy Leary.

The Merry Pranksters were known for their 1964 trip across America in their gaily decorated bus, Further— a trip made famous by Tom Wolfe’s book, The Electric Kool-Aid Acid Test. I had run into the Pranksters and Further at Berkeley in the spring of 1965 when they came tumbling off their bus to participate in one of the nation’s first anti-Vietnam War rallies. The Grateful Dead, in their earlier guise as The Warlocks, had played at several of Kesey’s “Acid Tests” in the Bay area designed to turn the world on with a concoction of LSD and Kool-Aid.

Garcia reportedly took his last acid trip at Olompali. “He developed three hundred-and-sixty-degree vision, died a few thousand times, and saw the word  “All” float into the sky before he turned into a field of wheat and heard “Bringing In the Sheaves.” Garcia would later note, “I unraveled every strand of DNA in my body. I felt both full and empty. I hardly spoke a word for two months, but it was worth it.”

Visitors to the free concerts at Olompali would spread out on the lawn, jump into the pool, and get comfortable, which, on occasion, involved taking off their clothes. Minus the lawn and the swimming pool, I am reminded of Burning Man where Burners spread out in the dust, instead.

Band member Phil Lesh noted, “Bear and some of the Pranksters set up [speakers] in the living room and all over the grounds; there was food and drink for all, and the pool was wall to wall with mostly nude people… From the makeshift bandstand by the kitchen terrace, an ad hoc band composed of members of the Dead, Quicksilver, and the Airplane played some of the most startling music I’ve ever heard, a new kind of music no one had ever made before, a true synergy of spontaneity and structure, created on the spot.” (Bear was none other than Owsley, the LSD Cook, known for producing over one million doses of acid. He worked as a sound-man for the Dead in the early years and helped with financial support. His ashes were placed on the soundboard at the Grateful Dead’s 50th Anniversary show in Chicago this year.)

Clothing was optional at the parties held by the Grateful Dead at Olompali. The swimming pool is at the back of the photo. The building on the right is now park headquarters. (Archived photo)

Neal Cassidy was another legendary visitor. Neal had hitchhiked across the country with Jack Kerouac in his epic journey described in On the Road. Later he would drive the bus Further across the country with the Merry Pranksters, thus serving as a bridge between the Beat Generation of the 50’s and the Hippie Generation of the 60s. George Hunter of the Charlatans’ band remembered, “the Dead would be playing and Neal Cassady would be doing this strange little dance— it was almost like breakdancing; very fluid. Out on the lawn there was this very far-out configuration of plumbing that was once part of a sprinkler system or something. It stuck out of the ground and stood maybe five feet high. I couldn’t figure out what the hell it was for. It was just a mess of pipes with faucets coming out of it that had been modified over the years. Very strange. So the Dead would be playing, and Neal would be dancing on the lawn with this bizarre metal partner. He’d dance around it, with it really. He had some pretty good moves, too. Neal was always in the thick of things.”

While only at Olompali for two months, Jerry Garcia would remember his time there as “idyllic.” And, he would come back several times over the next three years. His Haight-Asbury neighbor and friend, Don McCoy, was soon to lease Olompali for one of the most famous hippie communes of the 60s, The Chosen Family. The area’s wonderfully strange history would continue. It’s the subject of my NEXT BLOG.

Speaking of strange, or at least small world, Peggy’s sister Jane and her husband Jim were up this week visiting. Jane and I were talking about the 60s and Jane mentioned that Jim’s cousin Paula was mixed up in the San Francisco music scene in some way. Turns out that she was the wife of Don McCoy in his pre-commune period.