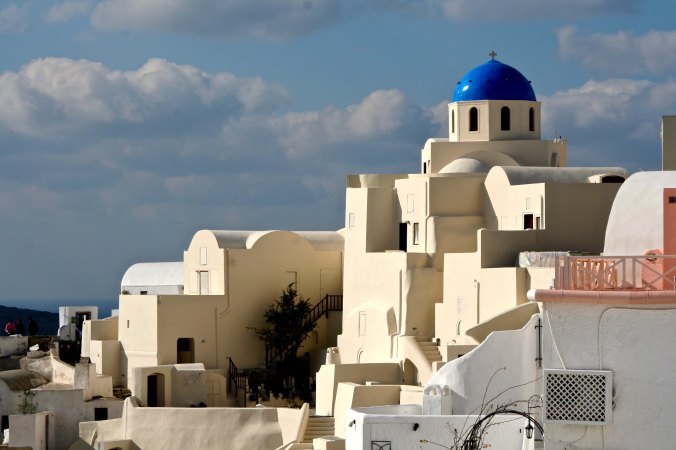 For its size, Santorini has numerous churches and chapels. Many of the smaller ones were built and dedicated by families of fisherman in thanks for their loved ones return from sea. (Photo by Peggy Mekemson.)

Today marks my second photographic essay on the beautiful Greek Island of Santorini.

Living on Santorini can be a bit hazardous to your health. It is a volcanic area prone to earthquakes and has suffered from several volcanic eruptions over time. As I mentioned in my last post, Santorini is part of an archipelago that surrounds a caldera. Calderas are created when the magna chamber under a volcano is emptied out and the volcano comes crashing down into itself. Crater Lake in Oregon is another example.

A massive volcanic explosion 3600 years ago may have been responsible for destroying the Minoan civilization on Crete. It may also have been tied to the legend of Atlantis. 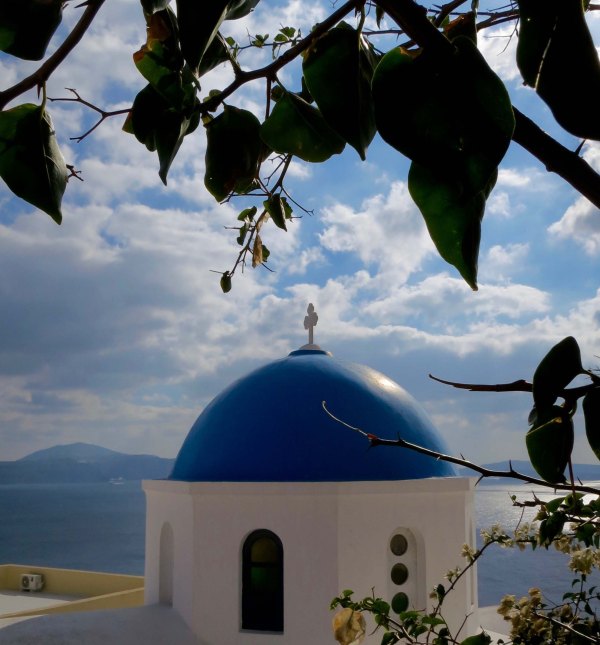 I found some leaves to frame this blue-topped Greek Orthodox Church. 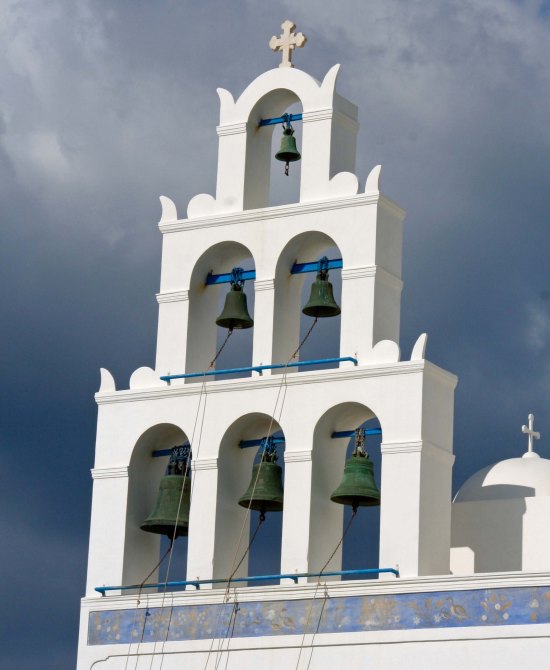 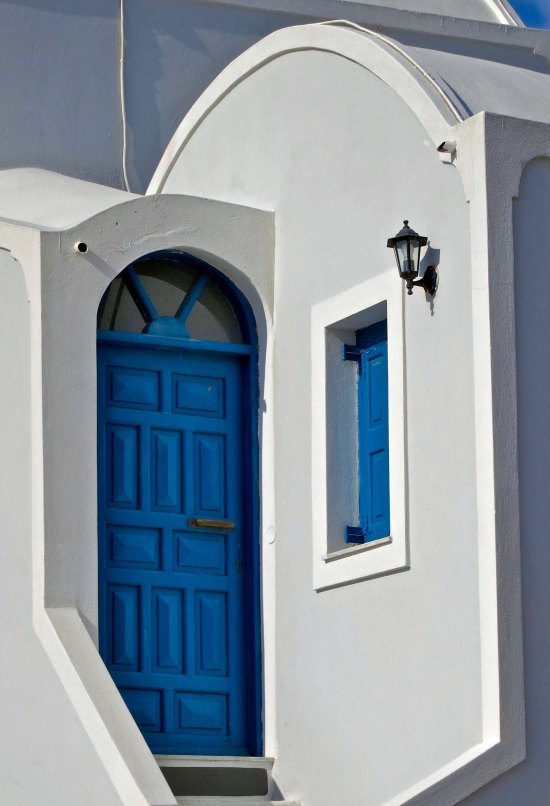 Blue doors are common on the island.

In addition to enjoying the beauty of the buildings and the Aegean Sea on Santorini, we wandered around the town of Oia. During the summer, this walkway would have been packed with people. As usual, I was on the lookout for unusual things that might tweak my funny bone or curiosity. 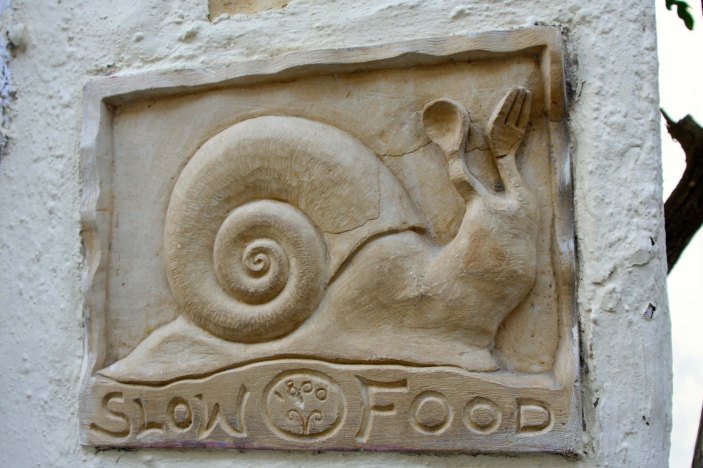 Such as this sign. Mosts tourists aren’t particularly noted for patience. Was this to forewarn them that their food would arrive when it arrived! Or that snails were on the menu? Or that the food was cooked slowly? (Photo by Peggy Mekemson.)

This octopus wrapped itself around a doorway.

An orangish, golden sphinx hung out on a porch.

And a white-washed lion looked down on us.

This fellow was obviously eager to climb to the top. (Photo by Peggy Mekemson.) 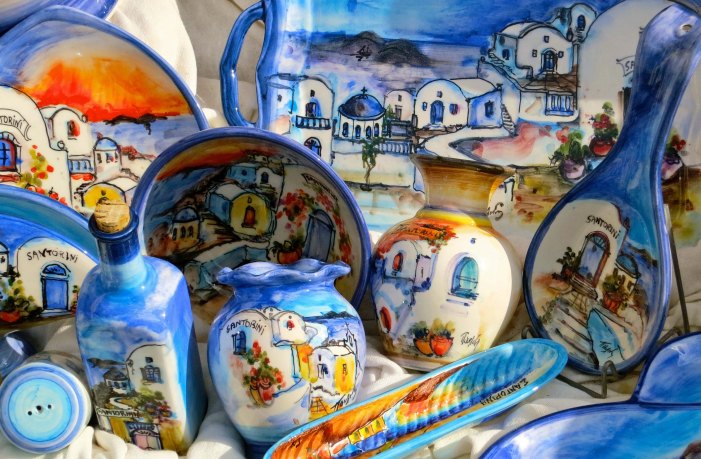 As one would expect, there were the usual souvenirs, all with a Santorini twist. 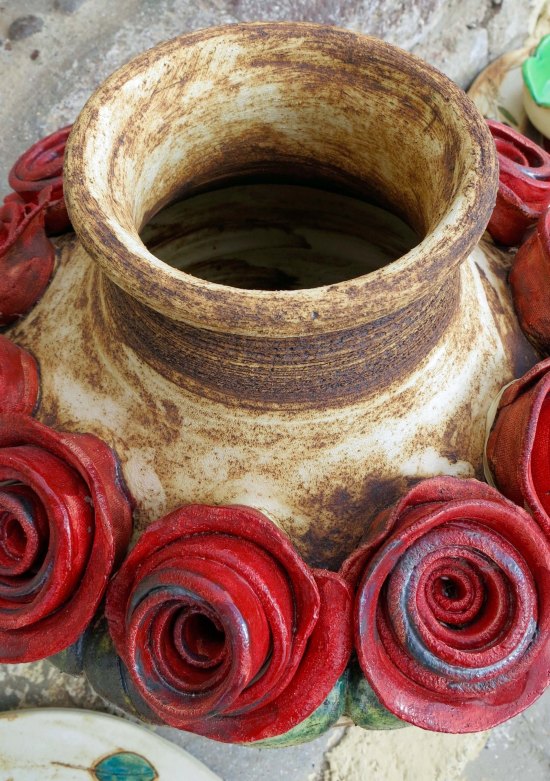 I liked this vase.

And this succulent plant. 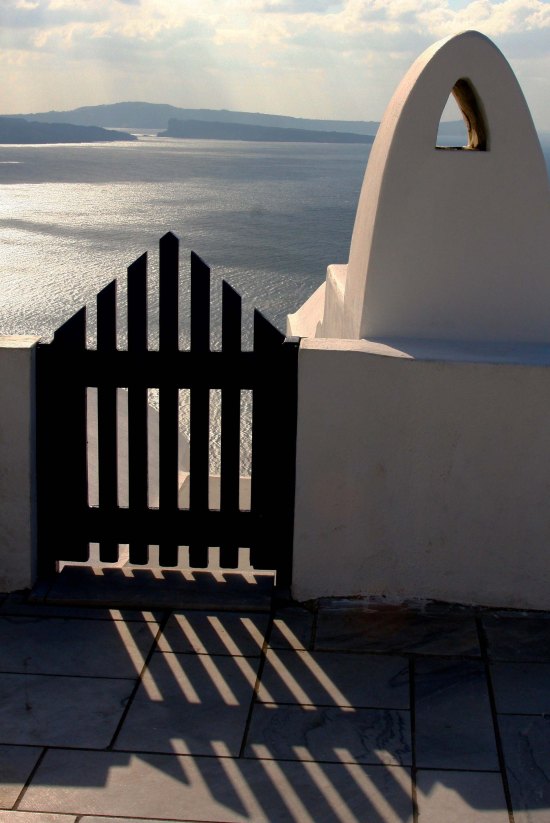 A number of interesting gates beckoned.

Cats and dogs wandered freely around Oia. I was curious about how many of these animals had homes. My blogging friends from Animal Couriers often transport these animals for free to loving homes throughout Europe. This guy was so well groomed I suspect he had a home, but he would have been welcomed in ours.

A final look at Santorini.