At 38-feet tall, the Cape Meares Lighthouse is the shortest lighthouse in Oregon. (Photo by Peggy Mekemson.)

Towering cliffs, abundant sea life, a lighthouse, massive rocks rising out of the ocean, the Octopus Tree, and an old-growth forest of Sitka Spruce… How could we resist? With the sun tentatively breaking through the clouds, Peggy and I grabbed our cameras, packed our raingear, and headed out to Cape Meares, which is located about 30 minutes away from Tillamook, Oregon.

But first, our stomachs demanded lunch, so we stopped at the Pelican Brewing Company in Tillamook for a hamburger and, of course, a beer. Peggy and I shared a pint of tasteful ale. The Northwest is noted for its great craft beers and Pelican has some dandies. Several have won national and international awards. 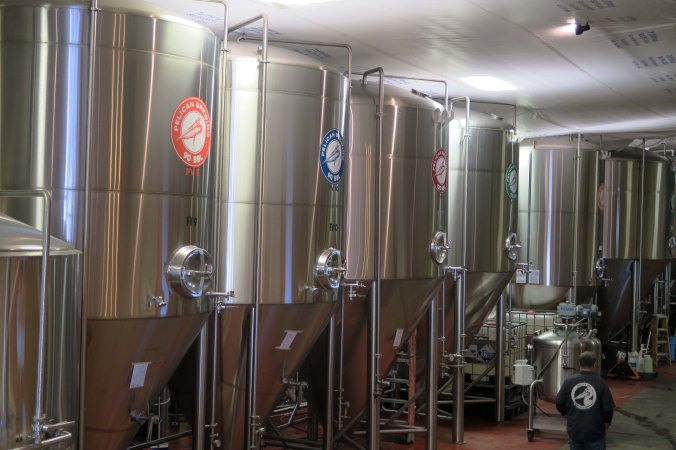 Good things were brewing at the Pelican Brewing Company in Tillamook, Oregon. 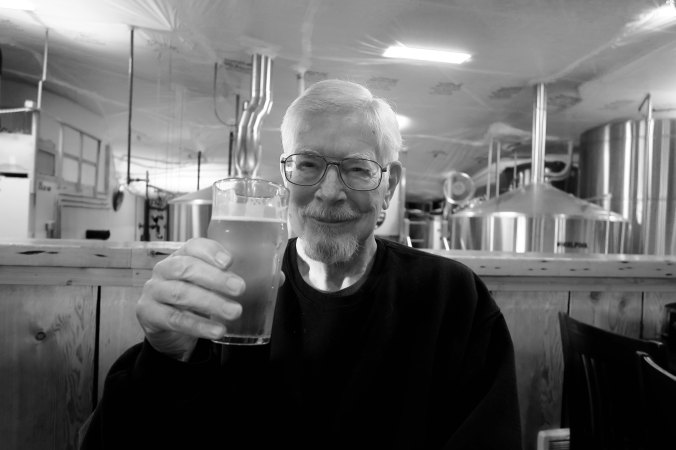 Having tamed our hunger and thirst, we headed out to the coast and were soon perched on an overlook admiring the Three Arch Rocks, so named because each one contains an arch. Of greater significance, the rocks are known for their large nesting colonies of Common Murres, Cormorants, Western Gulls, storm-petrels, auklets, Black Oystercatchers, Tufted Puffins, and Pigeon Guillemots. In 1907, Teddy Roosevelt declared the area a wildlife sanctuary, the first in the US west of the Mississippi. He did so on the recommendation of a pair of young conservationists, William Finley and Herman Bohlman, who had watched hunters decimate the sea lion population on the rocks, and even worse, observed local ‘sportsmen’ row out to the rocks on Sundays and use the birds for target practice, killing thousands.

Three Rock Arches as seen from an overlook just before the small town of Oceanside.

Peggy used her telephoto to pull in the middle of the Three Arch Rocks. While you can’t see through the arch at this angle, you can see how big it is. (Photo by Peggy Mekemson.)

We drove on to the Cape Meares Lighthouse where a sign in the parking lot suggested a detour toward the Octopus Tree that sent our imaginations spiraling out of control. Was this a magic tree of fantasy lore? Would we be swept up in its tentacles? Naturally, we had to check it out. The tree turned out to be a Sitka Spruce with eight trunk-like limbs that once made it into Ripley’s Believe It or Not. The story behind its unique shape is that the local Tillamook Indians shaped it to grow that way, created a sacred site where elders could gather to make important decisions and Shamans would travel on their mystical journeys. A few yards away from the tree, a plunging cliff provided more views of the Three Arch Rocks, this time backlit by the sun. Peggy found a man operating a camera drone on the edge of the cliff, capturing pictures of the 200-foot drop off that we weren’t willing to lean out far enough to get.

We walked through a Sitka Spruce forest to get to the Octopus Tree. 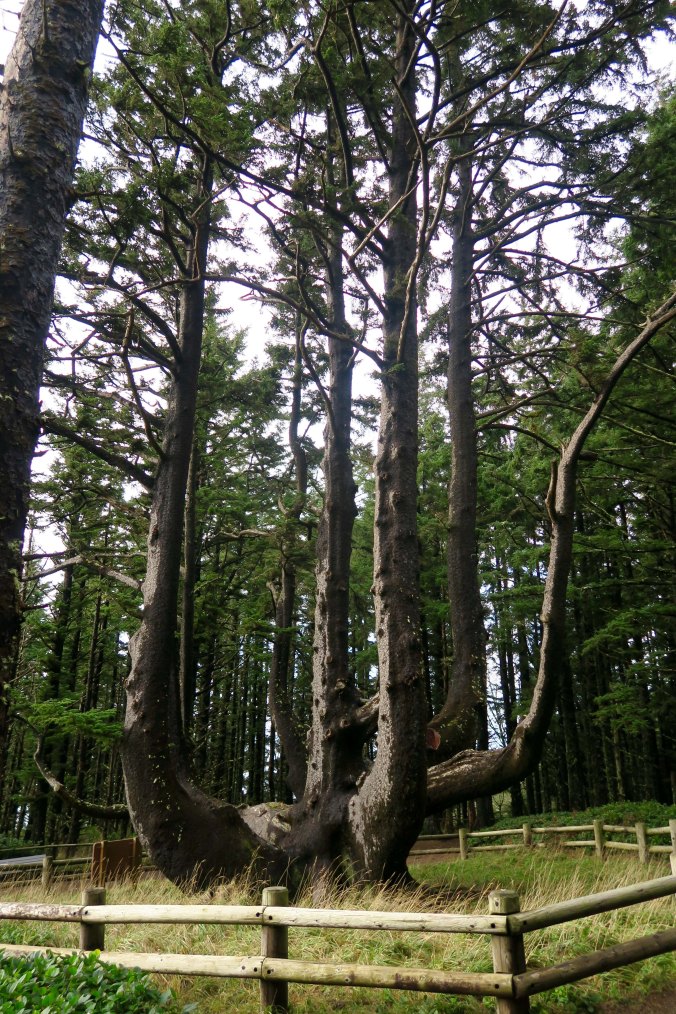 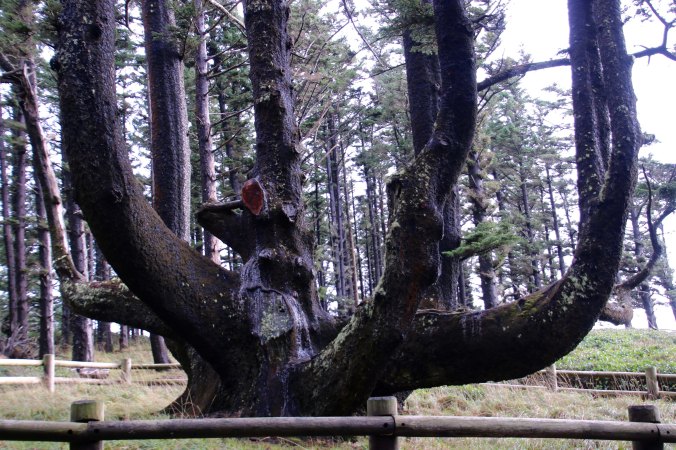 The Tillamook Indians were said to place their canoes on the branches. (Photo by Peggy Mekemson.)

We were south of the cape looking north when we took the first photos of the Three Rock Arches. Here we were looking south with the rocks back lit by the sun. (Photo by Peggy Mekemson.)

This shot of the rocks gave the feeling of a lurking sea monster with the light showing through one of the arches serving as its eye. 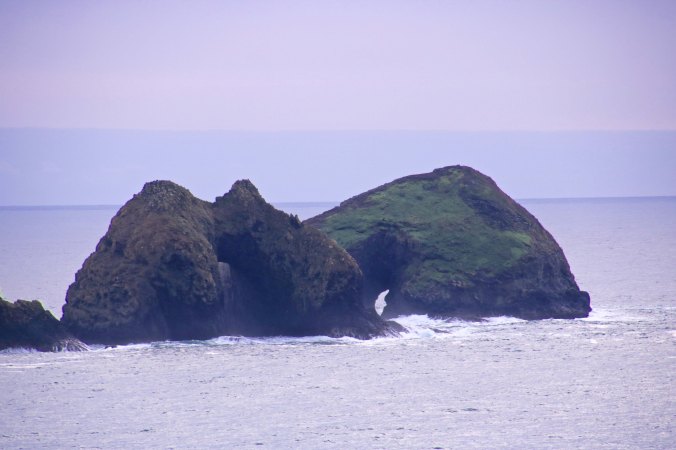 Two of the arches can be seen in this photo by Peggy. The rock on the left is the same one she took a close up of from the other direction.

The drone man who was capturing shots of the cliffs.

Walking back toward the lighthouse, we found more cliffs on the other side of the peninsula where the lighthouse sits. These featured a waterfall that tumbled down into the ocean. We also noticed white guano (bird poop) decorating the cliff sides, a sure sign that birds build their nests along the cliffs. Imagine being a young bird looking over the edge of your nest and pondering your fate.

The waterfalls came tumbling down. The white spots on the opposite cliff show the sites of bird nests.

A sign at the site informed us that baby birds are either flyers or jumpers. Murrelet chicks, who are fliers, have been observed pacing back and forth in their nest for a couple of days, flapping their wings frantically, and nervously peering over the edge before they finally take the plunge. It’s worse for Common Murres. Their mom kicks them out of the nest when they are three weeks old… before they can fly! No Mom of the Year there.  They simply stand on the edge and jump, hoping that their stubby wings will guide them to them into the ocean instead of the rocks below. Dad patiently waits in the ocean where he will take over parenting responsibilities for a few weeks until the babies can fend for themselves. Meanwhile, a whole host of hungry predators are waiting below chanting “Crash! Crash! Crash!”

While I am on the subject of birds and food, I learned at Cape Meares that the Tufted Puffins have a barbed tongue that they use to spear fish. They can get three or so minnow-sized fish on their tongue at once. The first one is pushed up the tongue by the second and the second by the third. The barbs hold them in place until, I assume, baby birds wrest them free. I also found out that a pair of Peregrine Falcons were known to nest in the area. These birds are the fastest animals in the world. They fly high above their prey, fold their wings and literally fall, or dive, hitting speeds up to 250 miles per hour (402 KPH) before smacking into their dinner.

At 38-feet tall, The Cape Meares Lighthouse is known for being the shortest lighthouse in Oregon. Given that it stands on a 217-foot tall cliff, however, size probably doesn’t matter. The lighthouse was built on location but the first order Fresnel lens (pronounced ‘fraynel’) was wrestled up the cliff in 1899 using a wood crane built from local timber. The lens had been manufactured in France and shipped around Cape Horn and up the coast to Oregon. It was built with four primary lenses and four bull’s-eye lenses providing light that can be seen 21 miles out at sea. 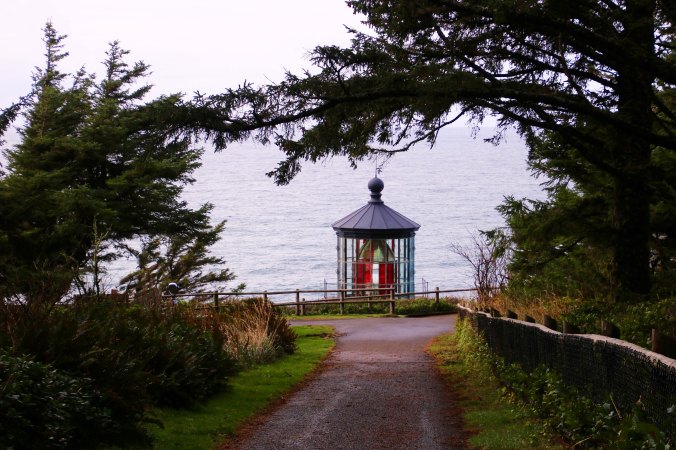 The Trail down to the Cape Meares Lighthouse. (Photo by Peggy Mekemson.)

A close up of the Fresnel lens with its red bullseye.

A final view of the Cape Meares Lighthouse.

NEXT POST: Peggy and I make our way through a rainforest to the highest waterfall on the Oregon Coast.

30 thoughts on “The Cape Meares Lighthouse, an Octopus Tree, and the Three Rock Arches of Oregon”