This ‘lone cypress’ is almost synonymous with the 17 Mile Drive and serves as the logo for the Pebble Beach Resort. I am pretty sure that it is the most photographed cypress in the world and it is certainly the most cared for.Check out the rock-work.  The tree probably has its own arborist.

Monterey and Carmel take me back in time, back to the 60s and 70s, back to when the world somehow seemed more promising— it was, after all, the Dawning of the Age of Aquarius. I used to drive down to Monterey humming the tune in my Volkswagen Camper, Van-Go, and free camp at a surfer beach just south of Carmel. The surfers are still there riding the waves, but the free camping has long since disappeared, a victim of the times. The welcome sign has been taken down. The hospitality industry prefers that tourists pay for their lodging and the locals prefer that their visitors drive Mercedes.

I considered myself lucky that I could still find a campsite for $32 a night last week when I visited California’s Central Coast. Maybe that’s because the water was unpotable at the Laguna Seca Campground. I noticed the signs after a couple of days of happily drinking away. Turns out the water is laced with arsenic. (If I seem a little strange… But, hey, how would you know the difference?)

The Laguna Seca Campground is located up in the hills here, hidden away among the trees.

While green grass was still growing in the valley, it had turned a ‘California gold’ next to my campsite. 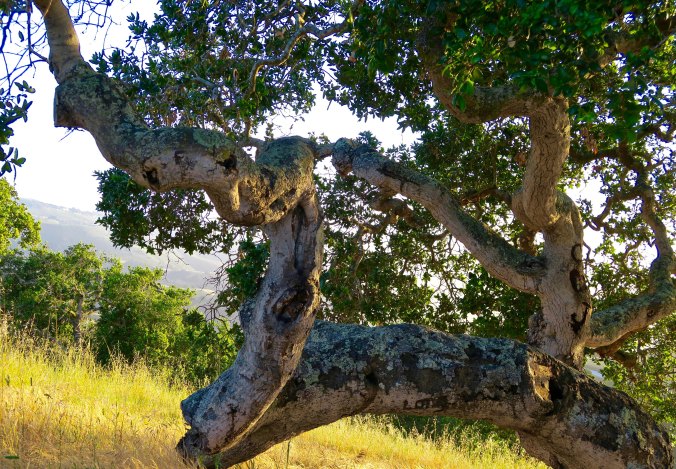 I liked the trees. Our grandkids would have been all over this one.

The campground is operated by Monterey County and nestles on top of the beautiful coastal hills that surround Monterey-Carmel. If you are a car racing fan, you will recognize the park as home to the Mazda Laguna Seca Raceway. I stayed there until I had to vacate the premises. People had signed up to pay $120 per night for my $32 site. It provided an excellent view of the raceway and the Ferraris were coming to town for the Ferrari Challenge.  I watched as 18-wheelers rolled in carrying their precious cargos.

The Ferrari Challenge was the first major race of the season. Crews were out preparing the track.

This site of the track was about 50 feet away from my camp. You can see why it was prime territory.

All of the 18 wheelers you can see in this photo were carrying Ferrari race cars. There was close to a parade of them going by my camp the morning I had to leave.

I don’t know what a Ferrari race car costs, but you can pick up a classic Ferrari 250 GTO for the tidy sum of $57 million. It’s a bit out of my price range— and my imagination. Somehow, I can’t picture myself running down to the store to pick up a carton of milk in one.

Laguna Seca is about 7 miles outside of Monterey on Highway 68, the road that connects Monterrey with Salinas. It’s hard to imagine two more different worlds. Salinas is prime agricultural land and the one-time home of John Steinbeck. (Be sure to visit the Steinbeck museum if you are in the area.) As I drove through, migrant workers were busily harvesting crops, probably hoping to get though before ICE agents showed up to arrest them. I suspect the farmers were even more eager for the workers to finish their job. If the price of your veggies skyrocket this summer, you’ll know what happened.

A trip along the 17 Mile Drive,  which runs along Monterey Bay and connects Monterey with Carmel, provides an excellent example of how the other half, or make that the one percent of the one percent, live. There are folks here who live in mansions perched on the ocean’s edge who can afford to go out and buy one of those Ferrari 250 GTOs— and pay cash.

The 17 Mile Drive is golfer heaven. Think Pebble Beach. Or, if you go back far enough in time, the Bing Crosby Pro/Am Golf Championship. Today it is known as the AT&T Pebble Beach Pro/Am. There are several golf courses in the area. If you are an avid golfer, you can purchase an inexpensive golf club membership for $18,000 plus a couple of hundred a month in dues. If that doesn’t strike you as inexpensive, you may want to compare it with a membership at the Monterey Peninsula Country Club for $275,000 with $1045 in monthly dues. Of course, membership is by “invitation only.” How else are you going to keep out the riffraff?

The Bird Rock Hunt Course, #9 on the map below, was once used for equestrian hunt and steeplechase competitions. In the 1920s it did double duty for riding and saber practice for the US 11th Calvary. Now it serves as the Shore Course for the Monterey Peninsula Country Club. Here, deer and golfers share the course.

A green on the Shore Course just below the small grassy hill has its hole marked by a flag. The cypress on the granite rock behind the green adds beauty to the course. The fog adds mystery. Numerous sand traps come with the territory at the golf courses along the 17 Mile Drive. 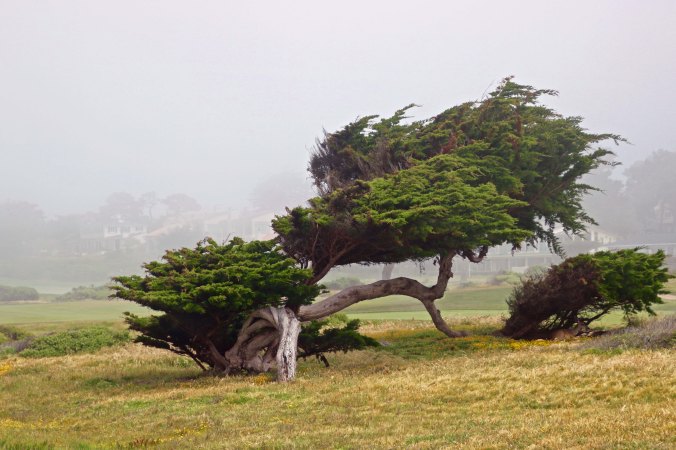 This cypress was also on the course, just off the road.

A happy, obviously well-fed buck, whose antlers are still in velvet, munches down grass on the course. He is welcome to eat all of the grass he wants and is not required to pay the course’s $275,000 initiation fee,

I’m having a bit of fun here; my apologies to golfing fans. I’m not one. In fact, the only C I ever got in PE was for golf. I was not happy. I’ve held it against the sport ever since. Peggy did much better. In fact, she was goofing around at Mary Baldwin College (or was that golfing a round) and hit a hole in one. The golfing coach happened to witness the event and immediately recruited her for the college team.

I have watched my share of golf matches on TV, however. It turns out that father-in-law number one and father-in-law number two both loved the sport. Bonding included many an hour of listening to the announcer whisper in awe at the difficulty of a particular tee shot. Exciting stuff. I classified my TV golf time as part of my marriage vows under ‘and other duties as required.’

If I were a golfer, or even if I just watched golf on TV for fun, the 17 Mile Drive is an incredibly beautiful location for the sport. The brochure for the route is justifiable in declaring it “one of the most famous scenic drives in the world.” Since the area is privately owned by the Pebble Beach Resort, you will pay a $10 per vehicle fee to visit, but it is definitely worth it. The resort is owned, btw, by an investor group headed by Clint Eastwood, Arnold Palmer, and Peter Ueberroth. They bought it from a Japanese company, possibly in a fit of patriotism.

Clint, you may recall, was mayor of Carmel in the mid-80s. He also owned a pub/restaurant in the town known as the Hog’s Breath Inn.  Being a fan of his spaghetti westerns, I ate there once in the early 70s shortly after it opened. Eastwood wasn’t happy. Apparently I resembled riffraff. He walked over to my table, pulled out his .44 Magnum Smith & Wesson Model 29 and said “Are you feeling lucky, punk?” Just kidding. Eastwood was off making a Dirty Harry movie and we were more than welcome at the restaurant.

Of course there is much more to the 17 Mile Drive than manicured golf courses.  A restless ocean, graceful Monterey Cypress, impressive rocks, and abundant wildlife are all part of the scenery. Following is a map and some of the photos I took. 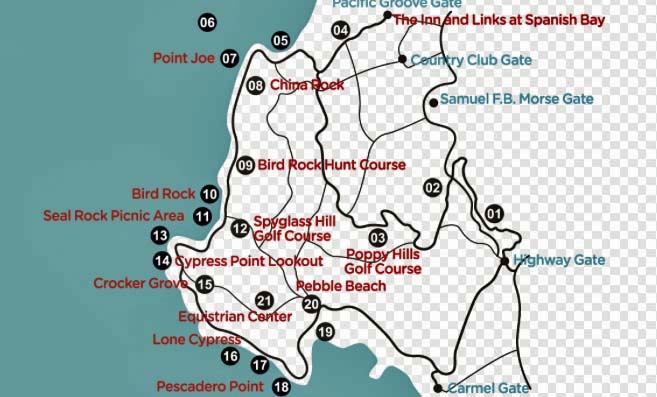 I borrowed this map from Google. There are several entrances. This time I came in through the Highway Gate on Highway 1 and drove down past the Poppy Hills Golf Course. My first stop was to admire the ‘Restless Ocean’ at #6.

The marker at the site told me that the ocean was restless because of all the rocks that the waves had to break over on their way into shore.

A wave cooperated with me by breaking over a rock.

The fog reduced my view of Bird Rock at #10. Cormorants were the main birds I could see. Harbor seals with sea gulls in between can be seen on the lower right. Fortunately some sea gulls flew over to see if I had any food to offer. I call them my galley of gulls.

Definitely a “Do you have any food?” look.

A bit more laid back.

The feathers on this fellow caught my attention.

I don’t think I have ever seen a darker eye.

Here we are back at the Lone Cypress at site #16. It has hung out on its perch for 250 years. A number of guy wires holding it up are meant to assure that it continues to hang out for many more years.

The road itself is worth the trip. Here it has a bower of tall cypress trees next to the Ghost Tree Stop at #17, which was my last stop. 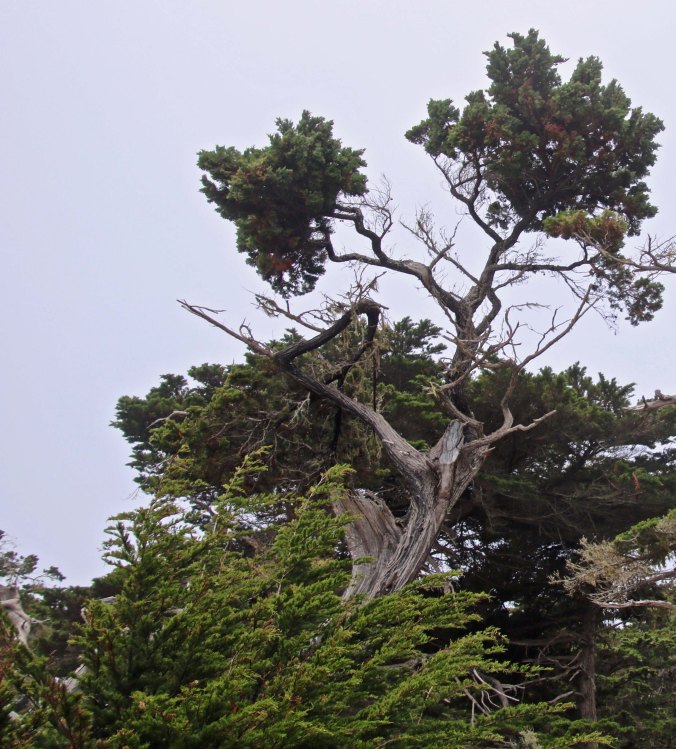 This is the tree on the left from the above photo. I can see where it might be considered ghostly.

I am not sure which tree was ‘the ghost tree’ but I found a number of candidates. 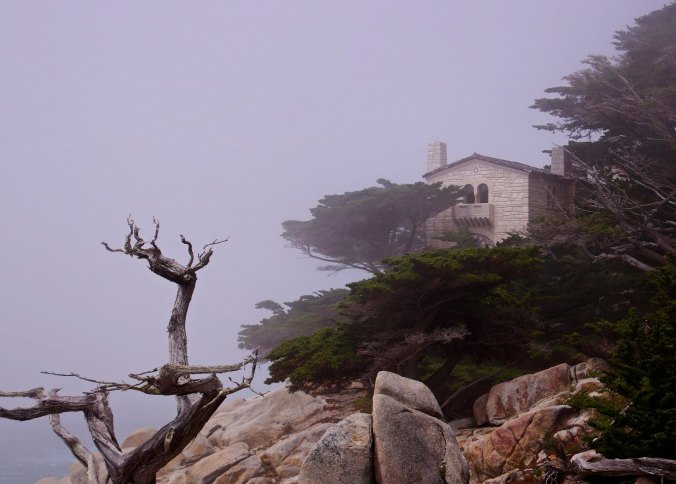 One of the 17 Mile Drive Mansions overlooks the Ghost Tree site. This is a different perspective on the tree shown above.

Maybe not ghostly, but I liked the way this ancient downed cypress seemed to drape itself over the rock.

Speaking of rocks, I felt these might have been something that Druids would worship.

The rock in the ocean seemed to fit right in! 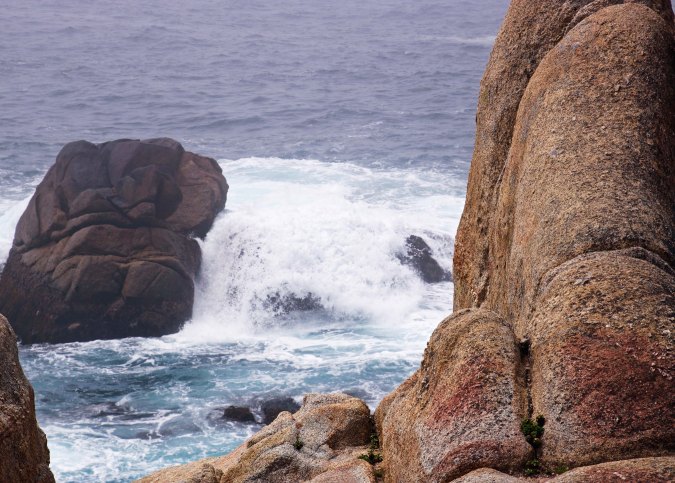 I liked the combination here of a shadowy cypress, rocks and the restless sea. 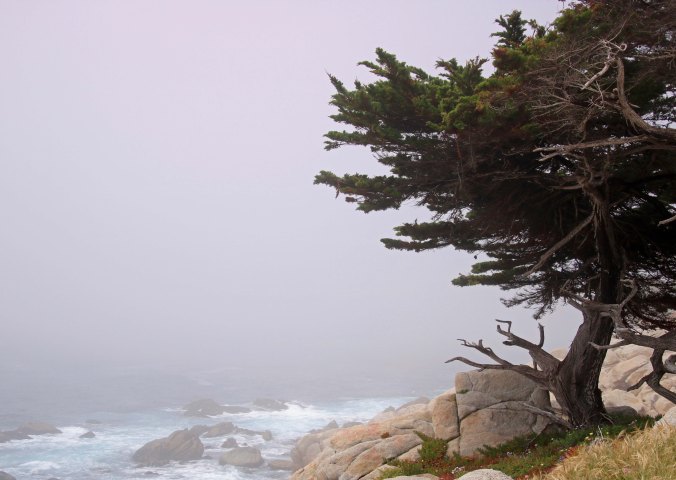 Another photo featuring a cypress tree, rocks and the ocean.

This cypress, another candidate for the Ghost Tree, seems an appropriate end for this post on the 17 Mile Drive.

28 thoughts on “The Deer Don’t Have to Pay a $275,000 Membership Fee to Play at the Monterey Peninsula Country Club on the 17 Mile Drive”