Imagine walking around a corner and coming on this wall of petroglyphs. The red sandstone provided a dramatic canvas for early artists. (Photo by Peggy Mekemson.)

I first became aware of art from traditional cultures as a Peace Corps Volunteer in Liberia, West Africa. The power of its simplicity and almost magical connection with another world caught my imagination– as it had artists such as Picasso and Matisse in the early 1900s. I collected several pieces and brought them home. Two of my favorites are the medicine mask and the bush devil shown below. 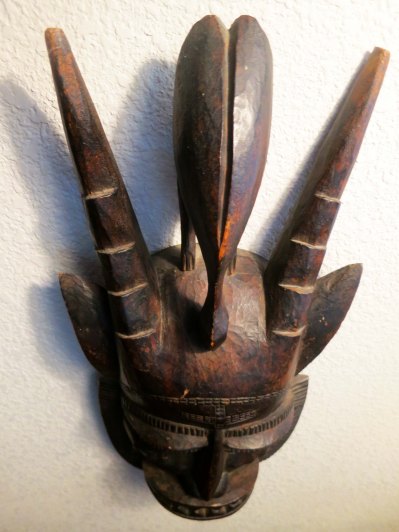 It was a natural transition for me to like and appreciate the rock art of Native Americans in the Southwestern United States. Found in hundreds of locations, it reflects several thousand years of cultural traditions. The arid climate of the Southwest combined with the fact that petroglyphs are carved in stone has allowed for their preservation. Only modern man with his graffiti poses a threat.

The Valley of Fire State Park near Las Vegas, Nevada hosts a significant collection of petroglyphs. The rock art was created by a culture known as the Basket makers (2000-1450 years ago) and the Anasazi/Ancient Pueblo group (1500-850 years ago). The Anasazi lived throughout the Southwest and were responsible for creating the impressive cliff dwellings at Mesa Verde National Park. They mysteriously disappeared around 1300, a fact which still has archeologists searching for answers.

The majority of the petroglyphs at Valley Of Fire are found at a site named Atlatl Rock by the park. The atlatl was a carved stick used for throwing spears and is featured in petroglyphs at the site. A steep, metal stairway leads up to the petroglyphs. Most tourists stop, climb the stairs and then hurry on their way. Walking a few hundred feet in either direction, which most tourists don’t do, leads to the discovery of hundreds of other petroglyphs– and Chuck. Following is a sample of what we found on our walk-about. 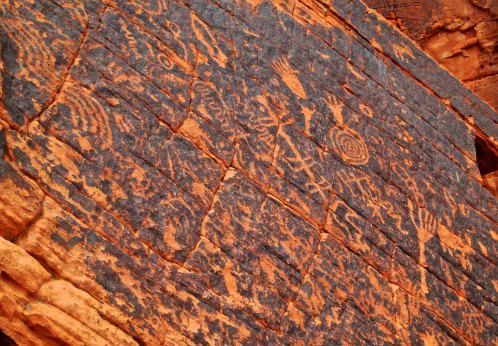 A closeup of the petroglyph wall shown above. Can you find the dog?

The dog– or what I think is a dog, is located in the photo above on the left beneath what may be a river.

I have never seen such a direct representation of trees in petroglyphs. It is possible they are being struck by lightning. And check out the strange horned being on the right. He likely has shamanistic connections.

I am intrigued by this petroglyph. The figure in the upper left is using an atlatl to launch a spear. But follow the line down. It starts from his left leg, passes through what appears to be a fox or coyote, and then becomes a big foot. How would you interpret this? On the left, you can see graffiti scratched on the stone by more recent visitors.

Early rock artists could be quite graphic in their depictions. This shows a child being born. I like to think of it as an early day birth announcement: “Big Bear and Bird Song are proud to announce the birth of their first daughter…” Not sure what the bird is doing sitting on her head. Maybe it’s a singing telegram. (Photo by Peggy Mekemson.)

Big horn sheep, from our experience, are the most common animal found on Southwest petroglyphs, which speaks to their importance, probably as a food source. 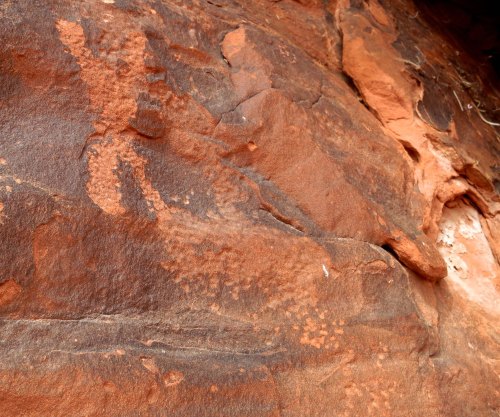 Given that donkeys weren’t around in North America when this petroglyph was created, I don’t have a clue what this animal is. The ears may be antlers, but even then… Any ideas?

The sun is shining down on this big horn sheep. What surprised me were the eyes. It is unusual to see eyes on an animal petroglyphs. (Photo by Peggy Mekemson.) 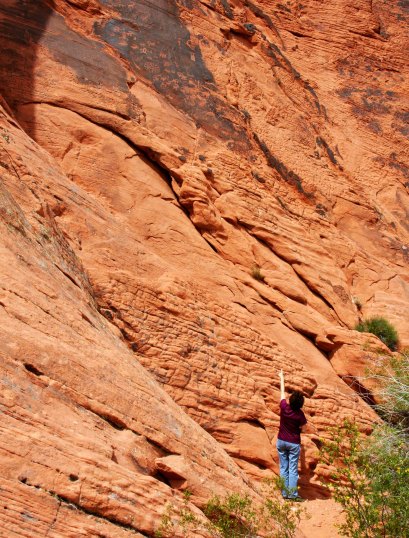 We often find petroglyphs perched high up on cliffs and marvel at the rock artists ability to climb up and do their work.

Here is a closer photo of the work they were doing, and my final photo for this blog.

NEXT BLOG: On to Red Rock Canyon.