Chuck, the chuckwalla, was quite curious about why we were wandering around his rock pile.

Meet Chuck. Peggy and I discovered him as we were hiking around in the rocks looking for petroglyphs at the Valley of Fire State Park. I can’t say he was friendly, but he certainly wasn’t scared. Mainly he was curious. I was almost on top of him before he crawled into a shadowy crevice.

Chuckwallas are rather impressive members of the lizard family that can grow up to 16 inches in length. Their primarily vegetarian diet apparently serves them well. (Not that they are above scarfing down an occasional insect.) They are found throughout the deserts of the Southwest. They hide in cracks when being chased and puff up their bodies so whatever is chasing them can’t yank them out. Most predators depart with little more than a bony lizard tail for dinner. The chuckwalla is then free to go on its way and grow a new one.

Having tired of me snapping photos, Chuck heads into a crevice. He is still keeping a curious eye on me, though. Note the loose skin– just waiting to be puffed out.

As I mentioned in my last blog, plants have done a remarkable job of adapting to desert life. Dilly-dallying is not an option when rain falls. Annual desert plants can grow, bloom, and produce seeds in a few short weeks. The seeds then wait a year, or longer, for the next rain to come along. Others, like cacti, slurp up and store enormous amount of water for later use. Some plants have deep roots to gather water and tiny leaves to prevent its loss.

Desert plants have adapted well to their environment. I really like the touch of green here.

I thought this dead bush spoke to the harsh living conditions found in the desert. I also thought it made a great subject for my camera.

Yucca plants have a two tier root system. One shoots out laterally from the plant and is designed to capture rain when it falls. The other is a deep tap-root designed to reach water during dry times.

A close up of the yucca’s flowers.

The primary reason for visiting the Valley of Fire is its magnificent rocks, however. I presented several photos in my last blog. Here are more.

The sandstone formations found in the Valley of Fire are close to pure silica. The difference between the tan and red rock is that a small amount of iron has produced a rust-like stain.

Peggy captured this impressive red mountain, which along with the red and tan sandstone rock in front, provides another example of iron staining. The famous Red Wall of the Grand Canyon is also an example. (Photo by Peggy Mekemson.) 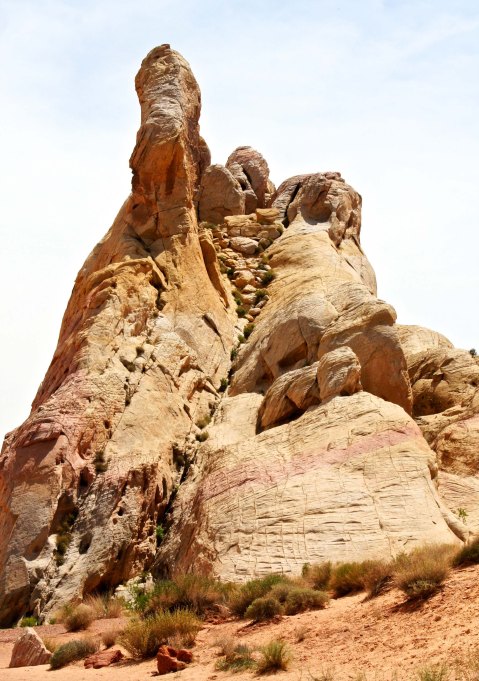 The White Dome graces the end of the road in the Valley of Fire. (Photo by Peggy Mekemson.) 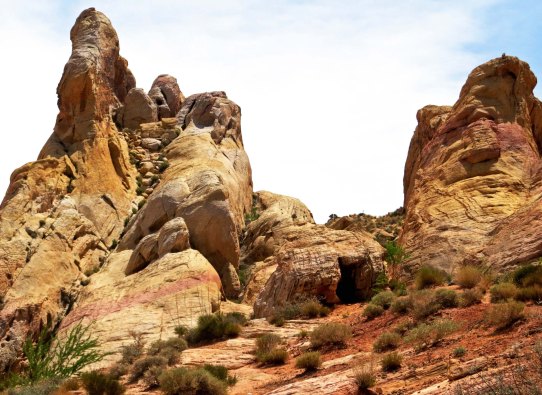 Balanced Rock. How does it do it?

This rock in the Valley of Fire State Park is appropriately named the Beehive.

A final view of the beauty.

NEXT BLOG: The ancient Native America rock art found in the Valley of Fire State Park.

34 thoughts on “The Valley of Fire State Park: Part II… The Desert Series”