The way madrone trees shed their bark is strange enough without having a pair of eyes staring out at you. We found this specimen along the lower end of the Cook and Green Trail.

Today’s post will take you along with Peggy and me on our latest backpacking adventure. This time, the trailhead was a mere 30 minutes from our house! The Cook and Green Trail follows Cook and Green Creek up to Cook and Green Pass where it connects into the Pacific Crest Trail, the PCT. (That’s a lot of Cook and Green; they were gold miners who worked the area in the 1870s and 80s.) Starting at the pass, we could have made a right turn and hiked to Mexico or a left turn and hiked to Canada. Another time. (grin)

Peggy points out a PCT marker showing the trail south. Had we followed it, we could have been to Mexico in a thousand miles.

We were greeted by a pair of signs at the Cook and Green trailhead, which I found amusing. Both were products of the US Forest Service. I don’t think the hand on the first poster is that of America’s preeminent spokesperson for fire prevention, Smokey the Bear; I think it belongs to Bigfoot! The second sign warned us about bears. Serious stuff. 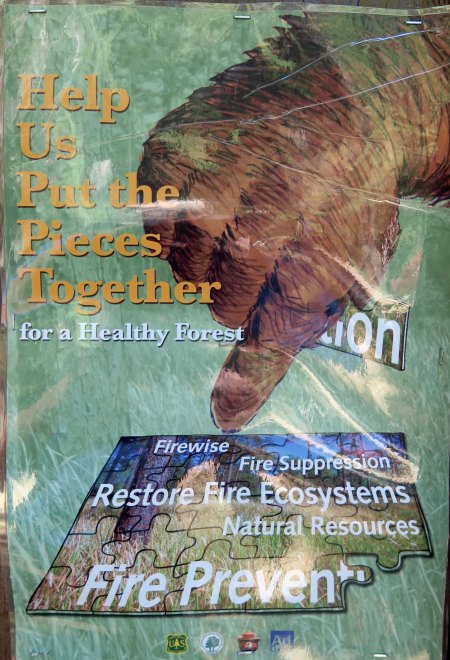 Did this sign use Bigfoot to emphasize fire prevention? Or is it a clawless Smokey? It’s puzzling.

It’s smart to be aware of bears when backpacking, but you should not let them keep you out of the woods.

I am a veteran of the backcountry of Yosemite, where the bears actually run a school on how to steal backpacker’s food. (Fake news, but just barely.) So I wasn’t too worried about the bears of the Rogue River and Klamath National Forests. Still, the poster is worth reviewing. Avoid confrontation: That’s always sage advice when you are dealing with a grumpy animal that can outrun you, outweighs you, and comes with long claws and sharp teeth. You don’t want to surprise them and you don’t want to get between a mother and her cubs. That having been said, bears aren’t particularly interested in eating people.  If they were, they would move into towns where there are lots of people to eat. Mainly, they prefer to avoid humans, like most sensible wild animals.

Your food? Well, that’s a horse of a different color, or at least a bear that has hung out around careless people. When I see bear poop that includes bits and pieces of the plastic used to package  freeze-dried backpackers’ food, I know to be on the lookout. BTW, a Yosemite bear would laugh at the advice to hang your food high in a tree. Guess what, bears climb trees. And if mama bear can’t climb a tree in Yosemite to retrieve your chow, she sends her babies up. The advice in Yosemite used to be that your food bag had to be at least nine feet off of the ground and nine feet away from the trunk, with no ropes hanging down! I’ve watched bears play tether ball with food that wasn’t hung high enough. Now the park rangers want you to carry plastic bear-proof barrels. I’ve never worried much about bears when away from Yosemite. Still, care is called for.

It’s good advice about dogs. Way back in history, I was out backpacking with my first father-in-law’s Springer Spaniel, Sparky, and came across a bear. Sparky jumped behind me and then stuck her head out between my legs and started barking vociferously. The bear stopped and growled before ambling on. I told Sparky that if the bear had charged I would have picked her up and tossed her out in front of me.

The Cook Green Trail begins its journey through a burned-out area. In 2012, we watched from our home as huge billows of smoke climbed above the forest and a fleet of helicopters used large buckets to dip water out of Applegate Reservoir, one mile above our home, to fight the Fort Complex fire. It was only a few miles away, and we watched nervously. Today, new growth is returning to the area as nature performs one of her miracles.

This photo captures the area where the Fort Complex Fire stopped burning along the Cook and Green Trail. It’s a good example of burned and non burned forest. On the burned side, the green near the ground shows where the forest is beginning to recover.

While the hike through the burned-out area was interesting, our fun began on the other side. Peggy came across a mile marker that she felt needed to be decorated, a madrone tree featured eyes peering out from its strange, peeling bark, several oak trees were dressed in moss, tree roots created weird sculptures, and the Mother of All Roots stood higher than me. 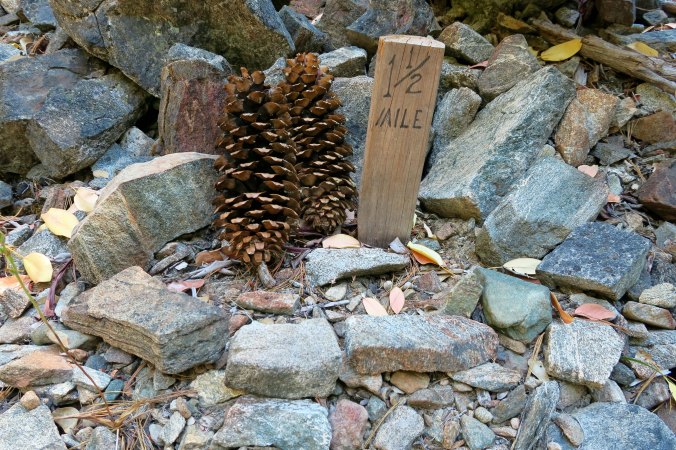 Someone, probably the forest service, had placed mile markers along the first section of the Cook and Green Trail. Peggy decided to decorate the marker by adding sugar pine cones beside the marker and rocks in front. 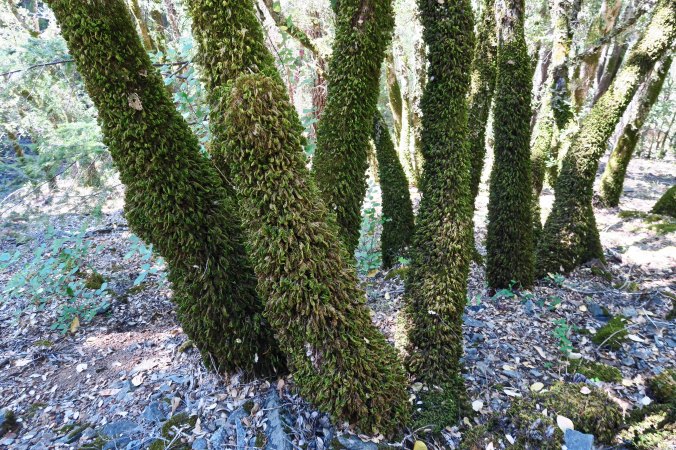 I thought these moss-covered live oaks were quite unique.

This is a close up of the tree moss.

We also found this interesting growth. At first I thought it was stag horn moss but it may be a lichen.

Tree roots can create fun sculptures. I’m not sure I would want to meet up with this one on a dark night!

More ordinary, but still interesting, this root had taken a detour around a rock and captured it. 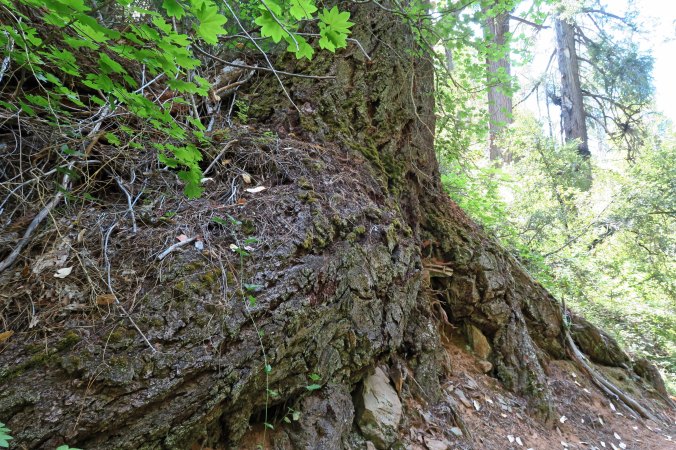 And here we have the Mother of All Roots!

I stood next to it just before the root connected to the trunk to provide perspective. (Photo by Peggy Mekemson.)

NEXT BLOG: We hike on to No-see-um camp, which turns out to be closer to a sacred grove than a bug infested swamp, and hike up to Cook Green Pass where we find PCT through hikers and mountain lion sign.