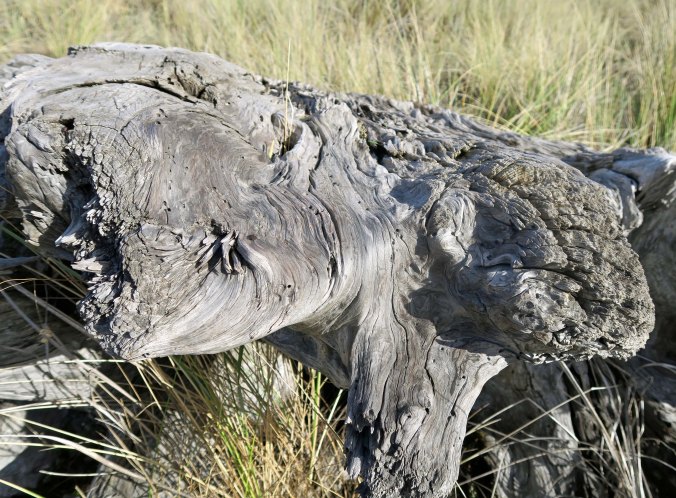 Treasures are often found by those who wander off from well-worn paths. I found this bit of driftwood on Clam Beach north of Eureka, California. I am forever taken by grains and texture in wood. What better way to find them!

Far too often, travel consists of hurrying through a number of must-see stops. I understand this. Some places are rightfully renown for their beauty, history shopping, etc., and time is limited. So you have a check-off list and a timeline. If you are on an organized tour, your travel is even more directed and options for wandering are close to nil, which is one of the reasons that I rarely travel that way.

Sometimes I like to travel without an itinerary and stop willy-nilly when something captures my attention. I realize that I run the risk of missing something worth seeing, but I also open the door for new adventures. When Peggy and I visited California’s North Coast in October, Mendocino was our must see stop. We even had a reservation, which is rare for us.

After Mendocino, it was wander time. We followed Highway 1 as it wound its way up the coast and then cut across the coast range to Highway 101 at Leggett. We zipped up 101 to Eureka so we would have more time on the coast north of the city. Eureka, BTW, was apparently what Archimedes, the Greek mathematician, shouted when he discovered a way of determining the purity of gold. It means, “I found it!” California 49ers shortened the concept to mean, “I found gold!” It became the state motto.

Our first stop above Eureka was at Clam Beach for no other reason than we hadn’t been there before. What we discovered was something of a rarity for the North Coast, a beach that went on and on. A small trail wound its way through brush, eventually leading us out to the beach. 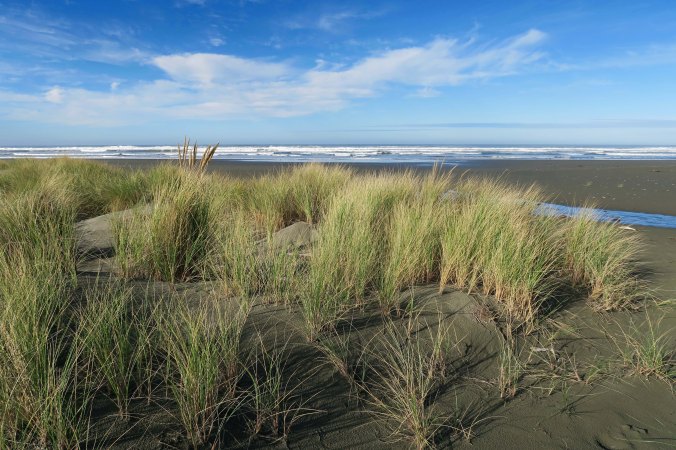 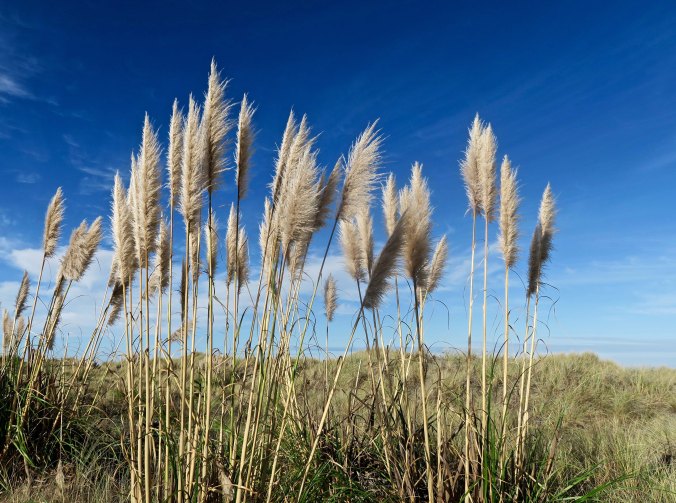 And golden Pampas Grass. Its beauty is countered somewhat by the fact that it is an invasive plant from South America, often replacing native plants. 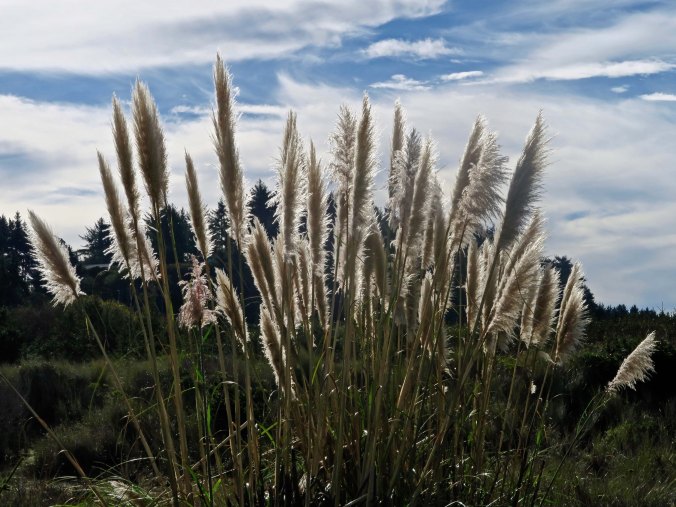 For fun, I shot the same Pampas Grass backlit the sun. 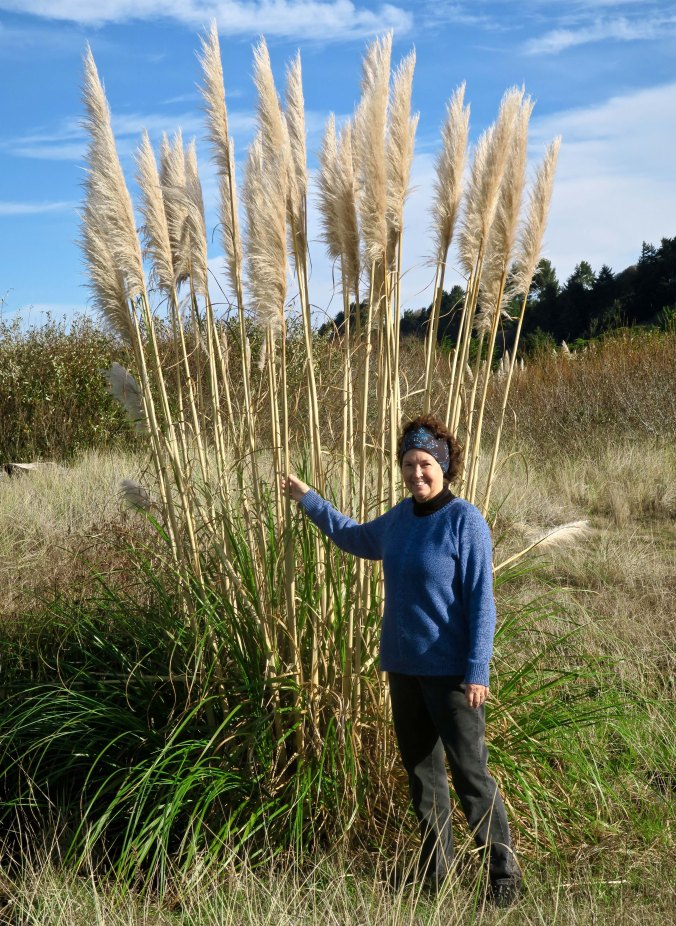 And then had Peggy stand next to it for perspective. 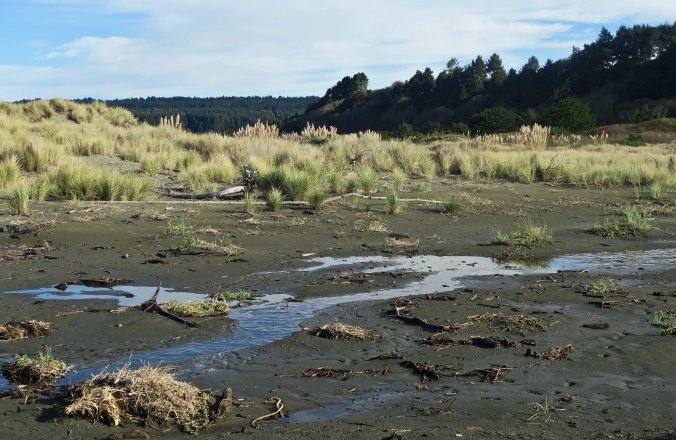 A final shot of Clam Beach with golden Dune Grass and Pampas Grass in the distance.

Usually when we are in this part of California, we spend some time in the Redwoods. Our views this time, however, were limited to what we saw from the road, except for one ancient giant we found at a rest stop. It had burned years and years ago, leaving nothing but a charcoal remnant of its once magnificent self. Still, it stood as a testament to the miracle of life… 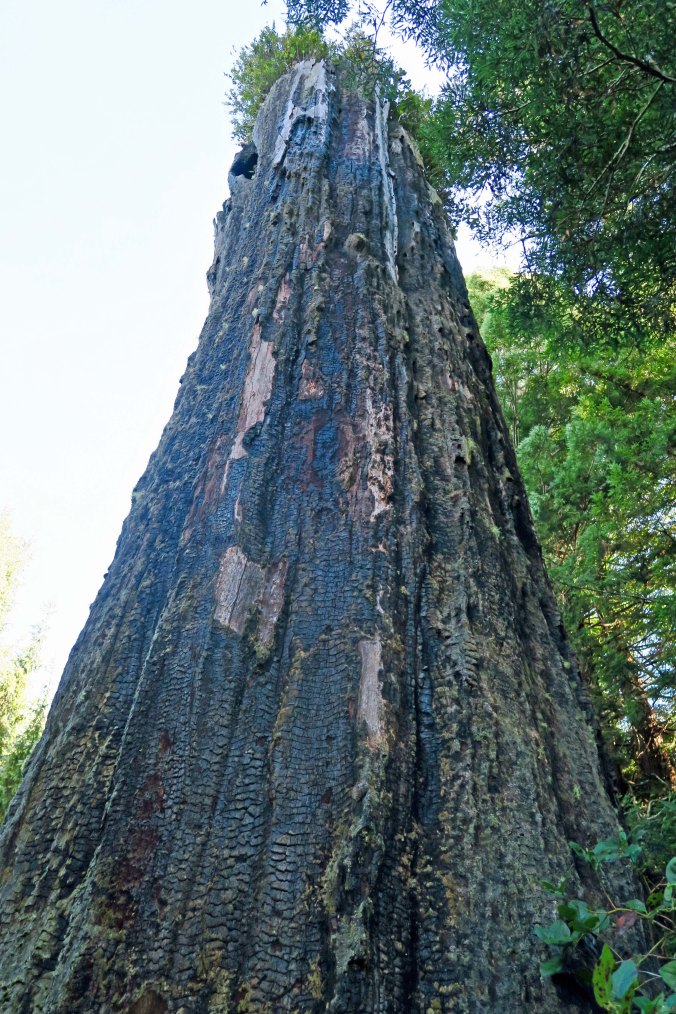 This ancient victim of fire amused me when I noticed that its top was creating a new forest!

Patrick’s Point State Park returned us to the rocky shoreline I associate with the North Coast. Peggy and I followed a muddy path down a steep cliff to get to the action!

Hiking down to the ocean at Patrick’s State Park, we spotted a rock that was lit up by the sun. 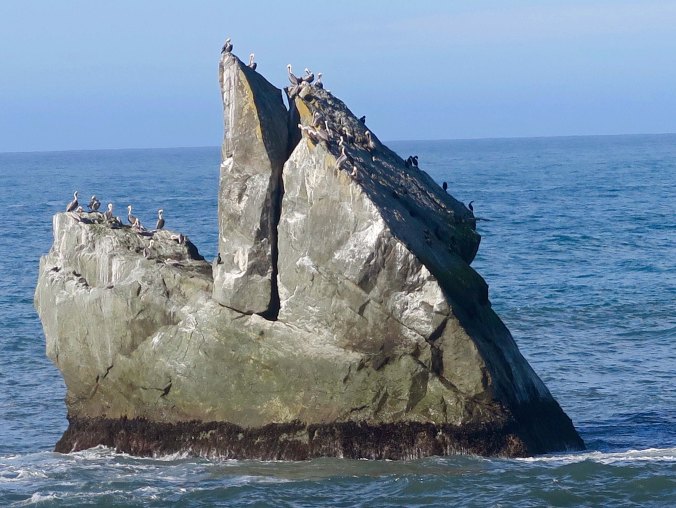 Closer inspection showed it to be a home for California Brown Pelicans. 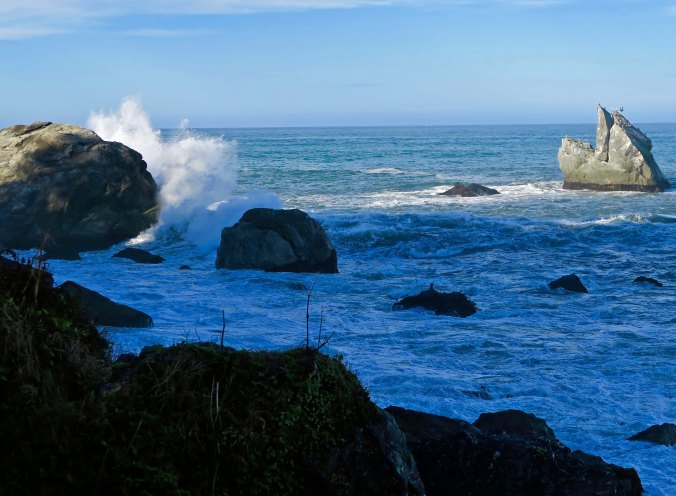 Edging my way around a cliff provided me with another view. 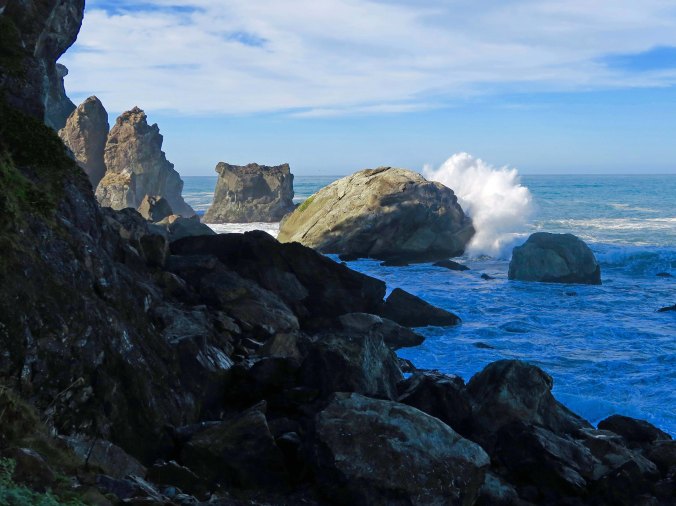 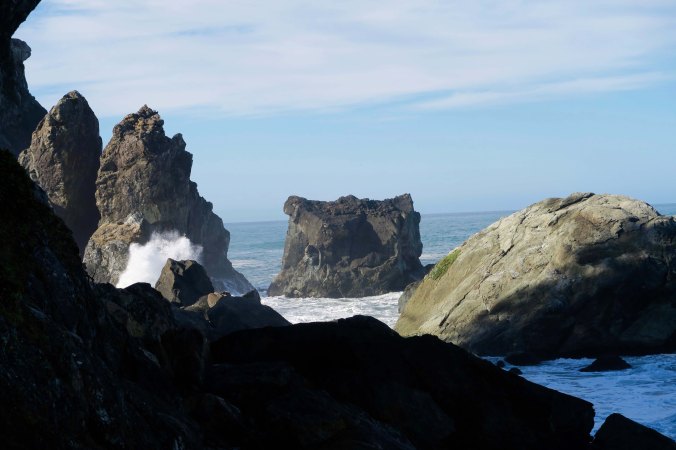 And this. I really liked the dark and light contrast, along with the massive rocks. 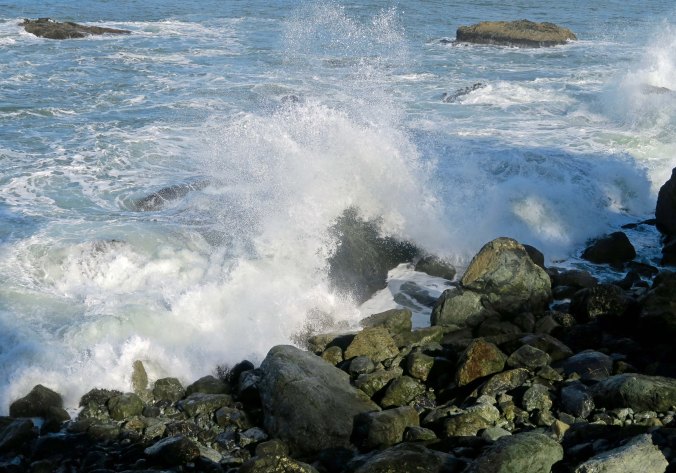 When I was inching my way back to where Peggy was, the ocean waved goodby.

NEXT BLOG: “There are elk!” Peggy yelled, almost causing me to crash. “There must be 300!”