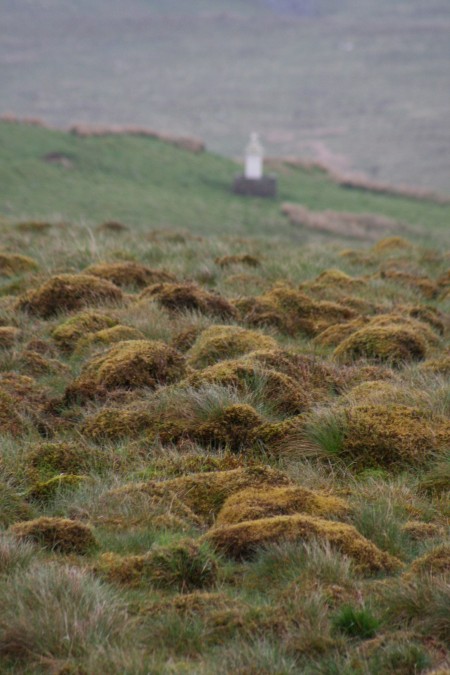 The ghostly grave of John Brown the Martyr on a lonely Scottish moor.

I mentioned the Scottish Presbyterian Martyr, John Brown, in a recent post I wrote about the Scottish presence on Cape Breton, Nova Scotia. My connection to Brown goes back to my Great, Great, Great Grand Father, James Mekemson, who had married Mary Brown Laughhead Findlay. John Brown was her Great Grandfather.

The story of John Brown’s murder verges on legend. He was, as the saying goes, a Covenanter’s Covenanter, a very devout man. The Scottish Covenanters received their name from signing a Covenant that only Christ could be King, which eliminated the King of England from being God’s representative on earth. The King was not happy. So he set out to eliminate Covenanters.

Reverend Alexander Peden, one of the top leaders of the Covenanter Movement, described Brown as “a clear shining light, the greatest Christian I ever conversed with.” High praise indeed; the type you reserve for a man who is killed for your cause.

They say that Brown would have been a great preacher, except he stuttered. Leading Covenanters visited his home and secret church services were held there. Important meetings took place. Alexander Peden stayed at his house the night before Brown earned his martyrdom and warned of dark times. Peden was something of a prophet when it came to predicting dire events. This time he was right.

Brown was out gathering peat with his nephew the next morning when soldiers led by John Graham of Claverhouse appeared out of the mist and captured him. The date was May 2, 1685. Claverhouse, or Bloody Clavers as the early Presbyterians identified him, was the King’s go-to man when it came to doing away with Covenanters. He was not noted for his compassion.

He took Brown back to his home and demanded that he swear an oath to the King in front of his wife and children. Brown started praying instead. The legend states that Claverhouse ordered his soldiers to kill Brown but they refused. So he took out his own pistol and shot him in the head in front of his family. The story then goes on to describe how Brown’s wife, Isabel Weir, went about the yard collecting pieces of her husband’s brain. (I don’t mean to treat this lightly, but somehow I can’t help thinking about a TV episode of Bones.) 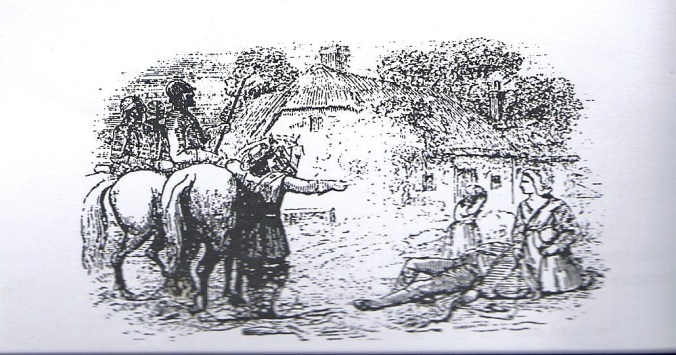 An early sketch of John Brown the Martyr of Priesthill Scotland being shot down by Bloody Clavers.

Three years ago, Peggy and I made a trip to Scotland where I went on a search for ancestors. In looking for John Brown’s grave, we had stayed at a wonderful Bed and Breakfast known as the Old Church B&B in the village of Muirkirk. The owners had provided us with directions on how to find the site. It wasn’t obvious. Old and older roads led to a farmhouse where we were to park our car and then hike down a barely visible trail a mile or so to the grave. 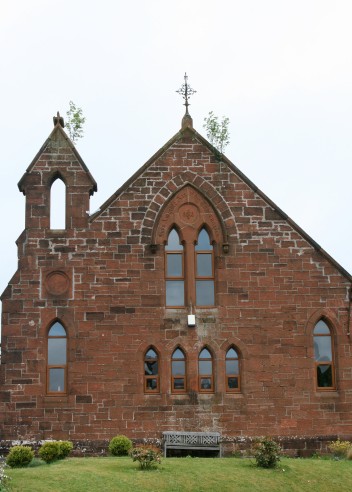 The Old Church B&B in Muirkirk Scotland where we stayed when searching for John Brown’s grave.

Finally the old farmhouse came into sight. A woman was standing on a porch enclosed by a three-foot high rock wall. She was wearing clothes that my great-grandmother times five might have found fashionable. Since we would be walking through her property in search of John Brown’s grave, I got out to talk with her.

But she did something strange. She disappeared. Now this was strange in two ways. Obviously she didn’t want to talk with us. She turned her back and walked rapidly toward the door.  Okay, I could live with that even though we had found most Scots to be friendly and helpful. Possibly she was shy.

What bothered me more was she sank. It was like she was traveling down an escalator or open elevator. Her head disappeared beneath the stonewall before she reached the door. I did not see her go inside.

“Maybe there are steps down to an underground cellar,” I thought to myself. Or maybe she merely bent over to work on a flower garden. Curiosity got the better of me. I walked over. There was no woman; there were no flowers; there were no stairs. As far as I could see the floor of the porch was solid stone.

I asked Peggy, “Did you see that woman disappear?”

“She went inside,” my logical wife explained.

“Ah,” I said and put the matter out of my mind as we wandered out the indistinct trail across the vacant moors to John Brown’s lonely grave. But the thought, unlike the woman, wouldn’t conveniently disappear; it kept nibbling away at me. Later I asked Peggy if she had seen the woman sink into the porch.

“Did you actually see her go in the house?”

So there you have it. Had we actually seen a ghost? Was this some ancient ancestor? I will wrap up my Halloween tales at this point but how about you? Do you have any ghostly tales you would like to share on this scary 2016.

Peggy stands on the site where Isabel Weir may have once gone about her ghastly chore of gathering up John Brown’s brains. Mist covers the distance as it would have on the day he was captured.

NEXT POST: I will be back to bicycling across the province of Ontario, Canada.

36 thoughts on “The Case of the Disappearing Woman… and other Scary Halloween Tales: Part III”