I found this spray painted bicycle at the top of Cape Breton’s toughest climb and laughed. (Photo by Jean Snuggs.)

Gearing ratios on bicycles are complicated beyond my normal interest in things mechanical. Let’s just say there are high gears for scurrying down mountains, medium gears for flat road travel, and low gears for climbing mountains and fighting headwinds. The more gears you have, the greater your options and ease of travel. The goal is to bike at a speed that is comfortable for your level of physical conditioning while keeping undo pressure off your knees. (Trashed knees can ruin the most pleasant bike trip.) Maintaining cadence, which is the speed you pedal, and knowing when to shift are critical parts of keeping your knees happy. Beginners have to struggle through a steep learning curve, especially in climbing hills and mountains— and yes, I recognize the potential pun.

The reason for this discussion about gears is that it relates to the substantial mountain that Jean, Lindell and I faced when we left our camp at Cape North in Nova Scotia and cycled back up into the Cape Breton Highlands. It was a doozy. We could see it looming in front of us as we cycled through the canyon carved out by the Middle Aspy River. The closer we came, the more it looked like something a mountain climber might enjoy.

The hill loomed in front of us. It was obvious we were in for a climb.

Was it the toughest hill I climbed on my journey? No. It wasn’t nearly as steep as my climb over the Panamint Range in Death Valley. And I had pedaled up several others that were much longer on the Blue Ridge Parkway. What made it so damnably difficult were my low gears— they weren’t as low as Jean’s and Lindell’s! While I was out of the saddle pushing down on my pedals with knee-punishing grit, Jean and Lindell were sitting down and merrily teasing me about my inability to keep up. Talk about a challenge. (grin) Had I been by myself, I would have simply noted the difficulty, complained to the universe, and pedaled on. And I wouldn’t have stopped at the first bike shop I came to and added more gears! 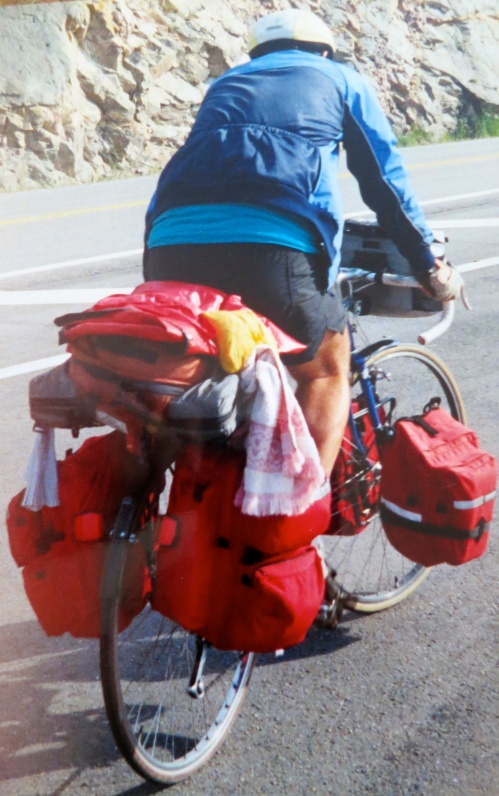 I posted this photo at the beginning of the series. Jean took it as we crested the mountain. Note the bulging leg muscles that couldn’t keep up with two slight women— even with 5,000 miles of travel. 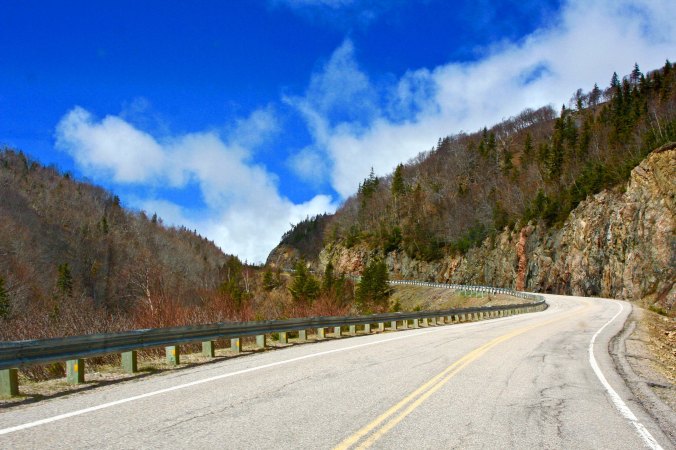 One of my happiest sights on any steep climb: the top of the mountain.

Let me note here that Lindell and Jean had a lot more going for themselves than low gears. They had both graduated from the University of Illinois with top honors in physical education and gone on to become highly successful community college track coaches. They had just completed a bike trip that was all about climbing hills. In addition to being bright and competitive, they were as tough mentally as they were physically. They had managed to keep up with me on the flats and downhills as well as busting my butt going up the hill.

Topping the ridge, we came across a bicycle outline that a cyclist had spray painted on the shoulder with the words, “Why?” We laughed in sympathy. Continuing on, we followed the Cabot Trail across the Cape Breton Highlands and down to the small town of Chéticamp on the Gulf of St. Lawrence, leaving the highlands with their Scottish influence behind for flatter, coastal lands with French influence. France had originally named Cape Breton, Île Royale, and had considered the island part of Acadia. We cycled down the coast though villages and cut inland to Margaree Forks where we said goodbye to the Cabot Trail and picked up NS Highway 19 known as the Ceilidh Trail, which we followed for 60 miles back to the Canso Causeway. 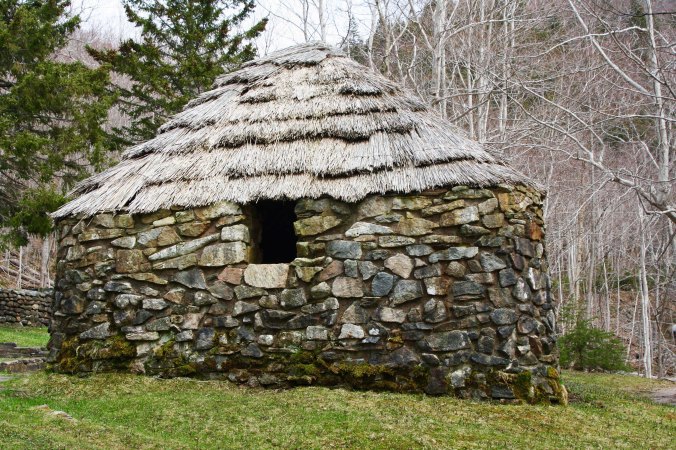 A very fast downhill after our climb (brakes advised), brought us to this traditional Scottish cottage known as Lone Scheiling. We had flashed by it on our bikes but Peggy and I stopped to admire it.

I took this photo out the window.

The cottage was surrounded by yellow birch. 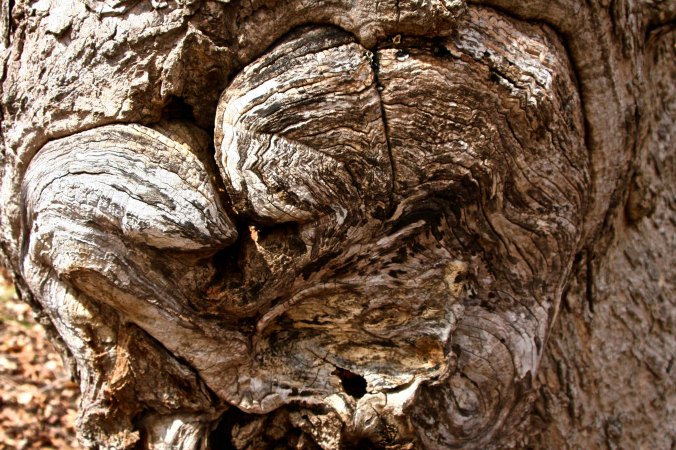 One of the trees featured this colorful knot.

A few ghost leaves still clung to branches, waiting for the budding spring growth to push them off.

And this creek burbled along beside the cottage. 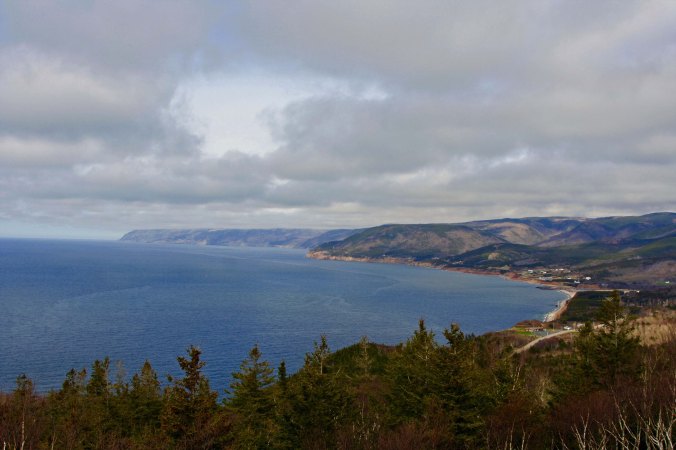 Climbing again, we came on this view of the west coast of Cape Breton looking out toward the Gulf of St. Lawrence. 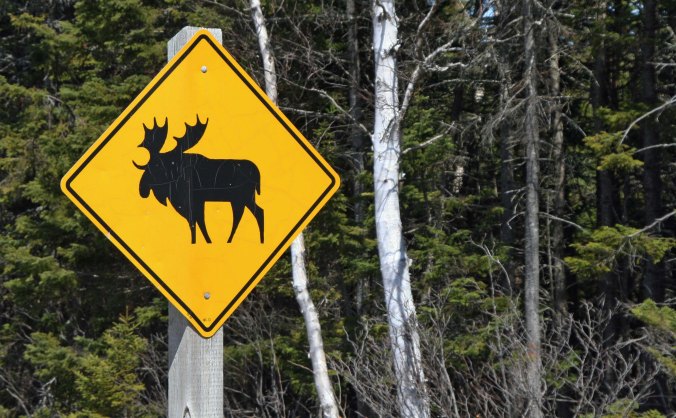 Signs along the road had been warning us about moose… 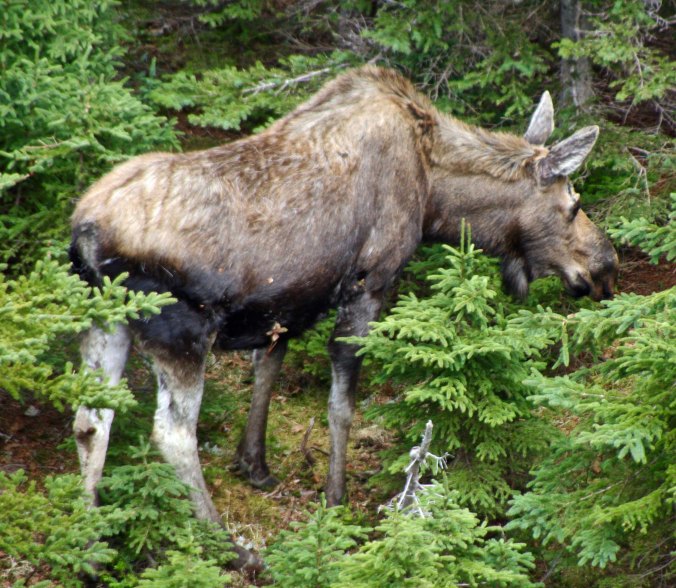 Finally, we got to see one. These wonderfully humorous animals can be quite dangerous. You don’t want one chasing you down the road when you are on a bicycle. When I lived in Alaska, a cyclist came around a blind curve on a bike trail and ran smack into one! Fortunately, the surprised moose decided to run away. 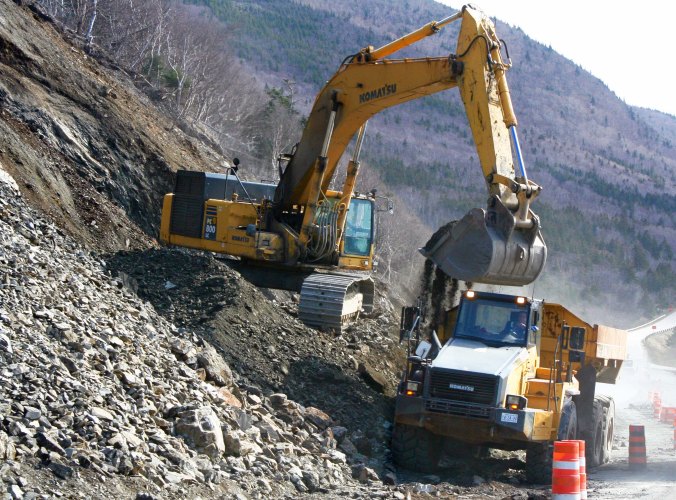 The Cabot Trail often requires road work after a rough winter. Peggy and I were entertained by this effort at a traffic stop. Don’t you wonder they got the earth mover up on the hillside?

This impressive cliff was near the road work. 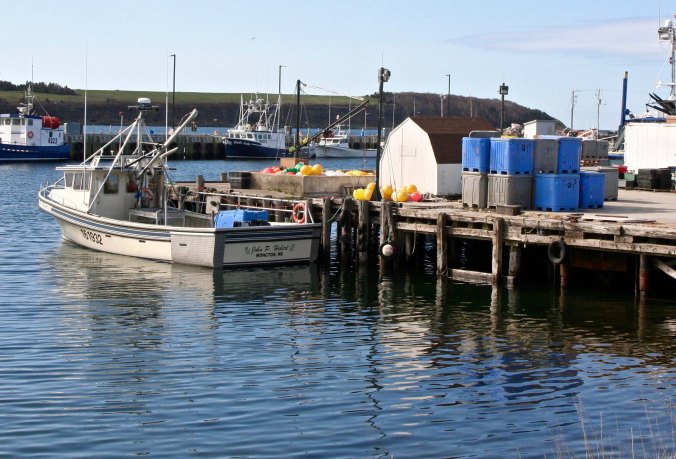 Leaving the Highlands, we came on several small communities along the coast where fishing is a major industry. Whale watching is also popular off the coast. 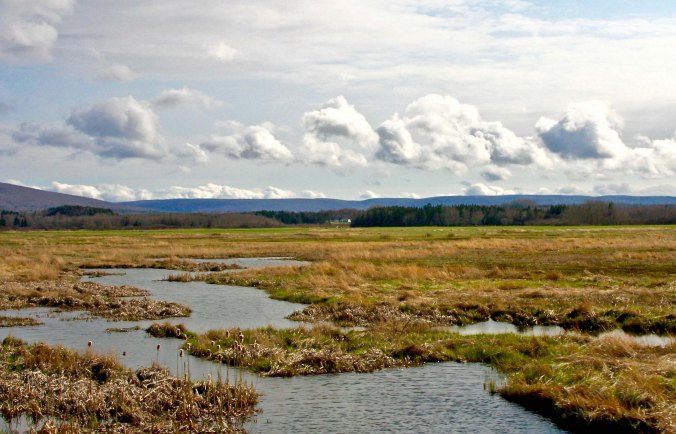 The Cabot Trail heads inland across much flatter country. Spring waters still flooded this field and the grass had yet to turn green. Last year’s cattails can be seen in the left foreground.

I’ll finish off my Cape Breton photos with this stream, which spoke to me again of the wild aspect of the island.

Our exploration of Cape Breton was over and my time with traveling companions was drawing to a close. We picked up highway 104 back through Antigonish and on to New Glasgow where Jean and Lindell said goodbye and biked south toward Halifax and their plane. I continued on my lonely journey west, following Highway 6 back to the coast and through towns with wonderful names like Tatamagouche and Pugwash. New Brunswick and new adventures were waiting.

NEXT BLOG: Peggy and I detour to Prince Edward Island, meet the mayor of Victoria, and eat a scrumptious lobster roll.