I decided that my title today called for this ‘ghost tree’ I found along the Parkway. Imagine the tree at night with a full moon behind it and a black cat sitting on the lower branch.

From ghoulies and ghosties / And long-legged beasties / And things that go bump in the night, / Good Lord, deliver us! —An old Scottish Prayer

Having spent a considerable amount of time out in the woods at night, including a fair amount by myself, I’ve had my share of nighttime encounters. To say they can be disconcerting is understatement at its best. Even a cow walking through your camp can send your heart racing when you wake up from a deep sleep.

I’ve written about some of my encounters before. Why not? They make great blog material. For example, there was the time I found myself nervously loading a 357-magnum pistol because I had heard a loud bang outside my tent. A doctor friend had insisted I carry his gun in backcountry Alaska. I was damned lucky I didn’t shoot myself in the foot. I was amused (or was that embarrassed) to discover it was only a beaver that had slapped its tail against the water. He had discovered me in his territory and was protesting.

And then there was the time I woke up with a bear standing on me, his snout inches away from mine. I screamed. So much for being manly. Truth is, the smallest twig cracking out in the dark night can lead brave souls to become hyper-alert, or maybe just hyper.

Camping out in the woods away from established campgrounds on my bike trip added another level of concern, being faced with the most dangerous animal of all— the two-legged type. I’ll take a bear anytime. Breaking twigs in the night become even more menacing. As I mentioned before, I was always careful to select a place where I was hidden from the road, or any other human observation, as far as that goes.

The Blue Ridge Parkway has a policy on not camping outside of designated campgrounds. For the most part this isn’t a problem, but I had decided to have my bike tuned in Asheville and didn’t get out of the town until late in the afternoon. (Having learned my lesson on dark tunnels, I had also bought a new bike light.) A considerable hill outside of Asheville had slowed me down, and the sun had started to slip behind a mountain.

Being tired and a bit grumpy, I decided a couple of hours of bicycling were sufficient. So I pulled off the road and went looking for a flat spot in the steep terrain, one that wouldn’t have me rolling down hill all night. Eventually I found a place that was only slightly askew. There was just enough room for my tent. Blue, my bike, had to be satisfied with leaning against a tree. Tossing and turning because a rock insisted on poking me in the back, it took a while to fall asleep.

Having crested one long climb with an even longer one ahead, I decided to camp out in the woods. Finding a flat spot other than the road was the challenge.

I woke up to someone/thing stamping outside my tent. Make that several things. I am sure you can see where this might be a bit alarming. I lay there wondering whether I should jump out of my tent or pretend that no one was home. Sometimes ignored problems go away. Sometimes they don’t. I had decided on the latter course when the problem started hissing. Stamping is one thing; hissing is another. Had the Appalachian ghosts of Tom Dooley and his mistresses come to haunt me?

This sign along the Parkway describes the origin of the Kingston Trio Song, “Hang Down Your Head Tom Dooley.” Their song was the PG version, however. Tom was living with a much older guy who had a younger wife. With mutual consent from all parties, Tom started sleeping with the wife. When a cousin of the wife showed up, he added her to the mix, often at the same time. Another cousin appeared on the scene and Tom once more sacrificed himself for the good of all. She brought syphilis into the mix, however. Eventually, one of the cousins killed another one with Tom’s help. Being a gentleman, Tom confessed to the murder and she went free. Tom was hung. At least I think that’s how it went. I became distracted with the appearance of the first cousin. Undoubtedly, the event left some ghosts hanging around.

This was the point where I started wishing my backpacking flashlight had a ton more of candle power. I unzipped my tent and pointed the dim light up the hill where several large things went crashing off into the brush. There’s a point here. It is always better to have large things crashing away from you instead of toward you, even more so on a dark night. Anyway, I recognized the thump, thump, thump as they disappeared. A herd of several deer had discovered my hiding place, and like the beaver, been surprised and irritated. I had simply never heard deer do their stamping and hissing routine before. (I have since.)

I went back to sleep, woke up refreshed (sort of), and resumed my journey. Today’s blog photos along the Blue Ridge Parkway will take you from Asheville to Little Glade Mill Pond, a distance of approximately 170 miles. Enjoy.

The ultra modern Park Headquarters in Asheville includes all of the latest environmental friendly designs, including plants growing on the roof. 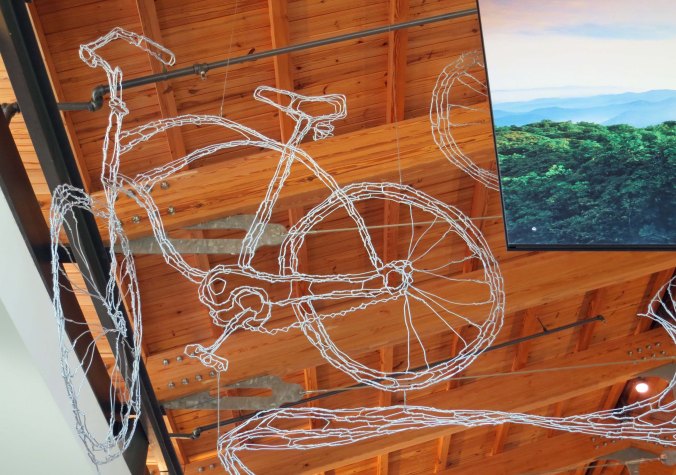 I enjoyed the bike sculpture at the headquarters.

My first stop the next day was at the Craggy Garden’s Visitor’s Center. Its high location provided a scenic view of the Black Mountains. The fence was a plus.When I bicycled through the area in June of 1989, the area was covered with blooming Rhododendrons. Peggy and I were too early for the display on our redrive of the route this spring. 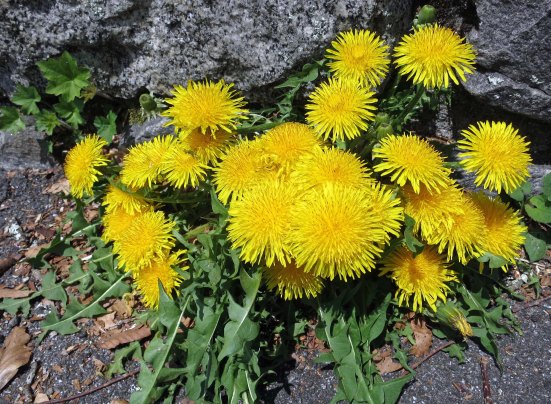 Dandelions had no problems with spring. They were happily blooming away throughout our trip.

Peggy insisted on buying me a neckerchief at the Visitor’s Center. It featured biking the Parkway. Like the bushy look? I was honoring my bike trek where I had three haircuts in six months. 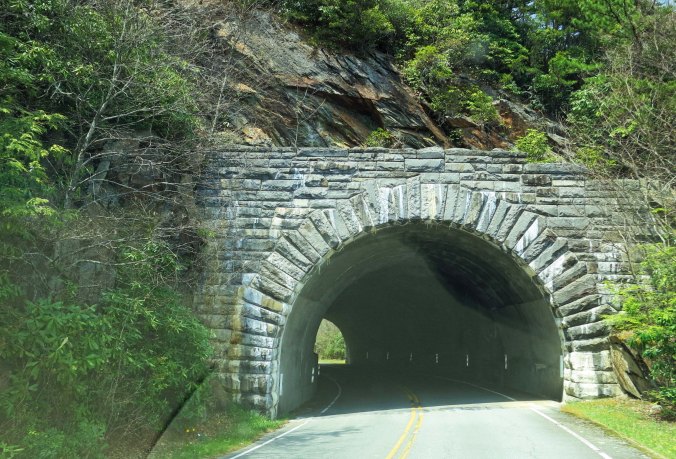 One of numerous tunnels along the Parkway. I found the stone work quite appealing. Stone masons from Europe were brought in during the 1930s to help. 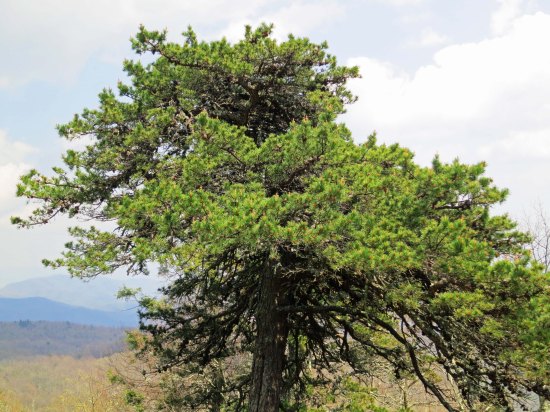 This is the twin to the tree I featured at the beginning of the blog. It was actually standing next to the other tree. 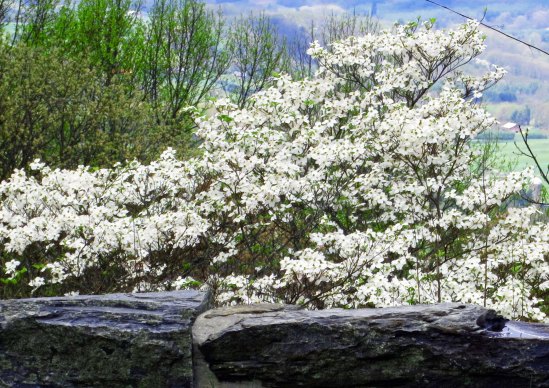 Dogwood is another plant that enjoys spring and was blooming in profusion all the way along the Parkway. 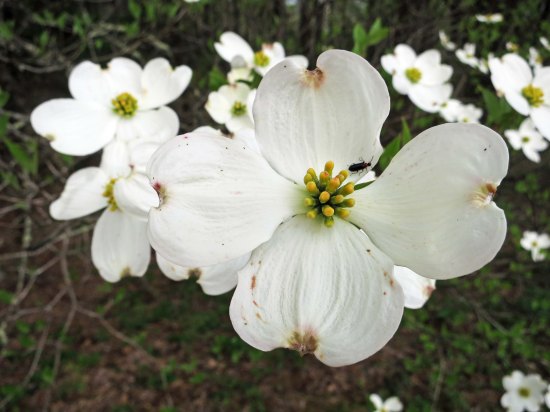 A close up of the dogwood complete with beetle. 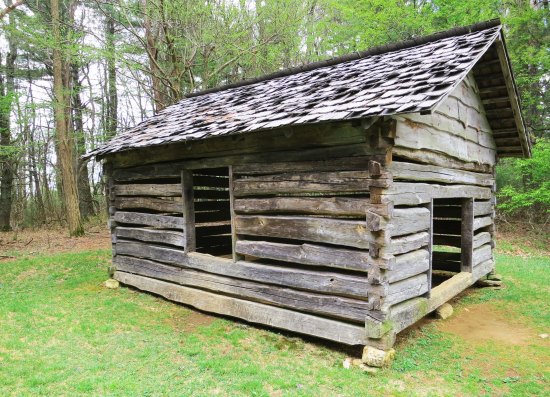 The Cool Spring’s Baptist Church was next door to Jesse Brown’s cabin. Usually, services were held outdoors. There wasn’t much difference.

And the cool spring. The wooden channel carries water into the spring house.

I doubt the early pioneers would have seen this Scottish bull in the mountains. 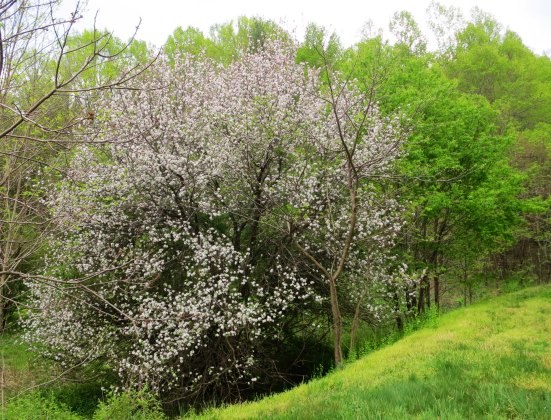 Apple trees, on the other hand, were quite common. Hard cider was a pioneer staple.

Farm lands add as much to the beauty to the Parkway as forests and mountains.

Little Glade Mill Pond provides a great lunch stop. While Peggy whipped up sandwiches, I hiked around the pond.

Naturally, I had to focus on the reflection shots. Our van is off to the right. Lunch is being prepared! Breakfast is my responsibility.