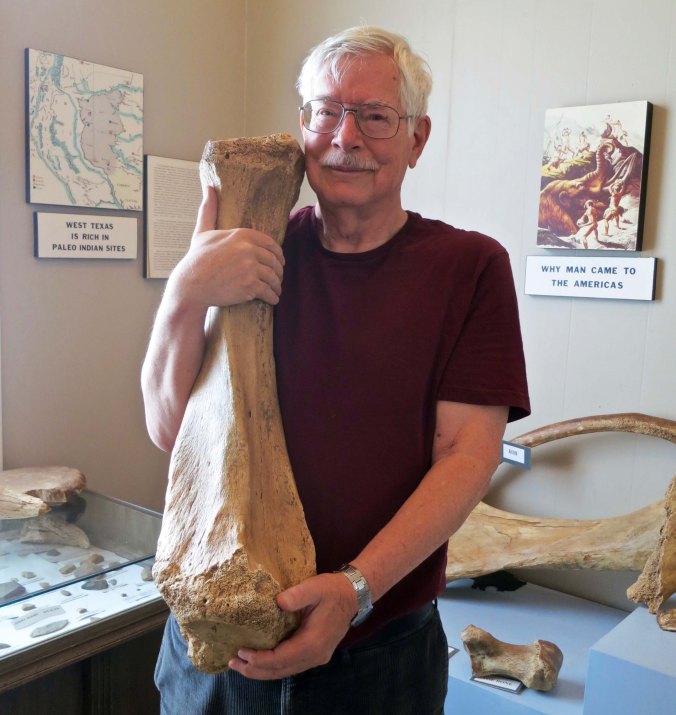 Texas is like this bone, BIG. I found this fossil at the Garza County Museum in Post, Texas. Peggy and I often stop in small museums as we travel. We are never disappointed and often delighted. Where else could I play with mastodon bones? There are more photos from the museum below. (Photo by Peggy Mekemson.)

“You must remember that space is large; it is even larger than Texas.” — Werner von Braun, the great rocket scientist. I don’t know if you could persuade a true Texan of this, or even me, after I rode my bicycle across the state.

My first major landmark the next day was a sign declaring I was about to enter Texas. I stopped, of course. I had now bicycled through four states: California, Nevada, Arizona and New Mexico. Texas with its heat, thunderstorms, hailstorms,and tornadoes was next.

I knew something about distances in the state. I had driven across it twice. I also knew a little about the weather. In search of the perfect steak on one of my trips, I barely escaped a flash flood. A day later it was hailstones the size of hardballs. In the early 80s, I taught a workshop in Houston, Texas on using long distance bicycle trips as fundraisers. None of this, however, prepared me for bicycling across the state.

Sometimes it is best not to know too much about what you are getting into. A lot of adventures would be missed.

I climbed back on my bike and spontaneously broke into the song, All My Ex’s Live in Texas. George Strait had made the country-western tune popular a couple of years earlier and I had been singing it with flair ever since. My first wife lived outside of Houston.

My initial view of the state surprised me. Where I had expected scrub brush and cacti, large farms stretched into the distance. Huge, insect-like, irrigations systems crawled across the land shooting long showers of water over several acres at a time. Plowed areas were so red they reminded me of the laterite soils of the West African rain forests, where I had served as a Peace Corps Volunteer. 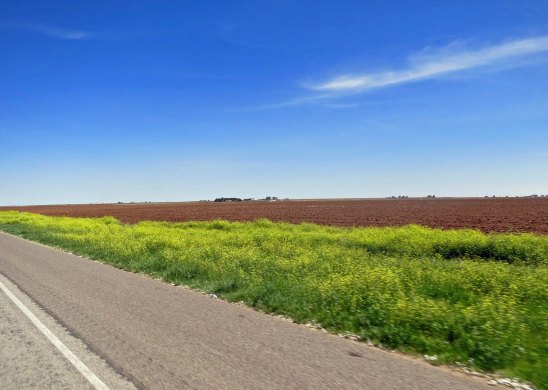 I wasn’t prepared for the extensive farms and the red soil I found in West Texas.

Cotton was king here. The crop had been harvested the previous fall but scroungy grey cotton balls could still be seen clinging desperately to weeds just off the highway. Bicyclists, who live on highway shoulders, tend to notice such things, along with dead animals and broken auto parts. And they have a lot of time to contemplate what they see.

I biked on through the small town of Plains and on to Brownfield. Natural landmarks are few and far between in flat country. I came to rely on two man-made additions to the skyline: water towers and grain elevators. Almost every town in the Texas dry-country had a water tower, which would proudly display its name. Many farming towns with rail connections also had grain elevators. Both of these structures reach for the sky. My challenge was to dampen my Pavlovian responses and not get too excited about food and drinks when I first spotted them. Usually, they were miles away. I’d arrive at DQ (Dairy Queen), when I arrived at DQ. 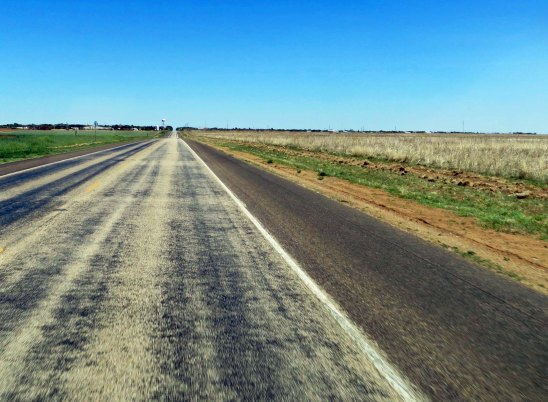 Water towers became one of my main land marks as I biked across Texas. Do you see that tiny dot in the air? 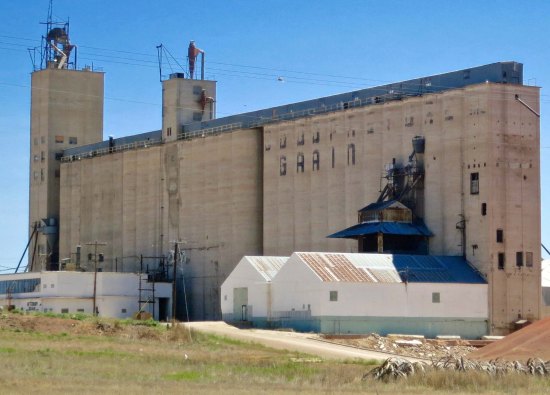 I always wonder where they find enough grain to fill these huge grain elevators. This particular storage facility was in Brownfield. 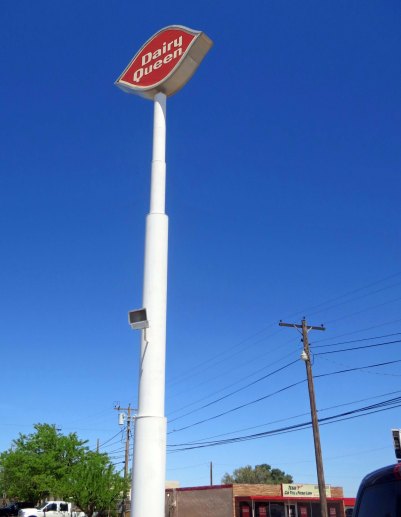 The local DQ in Brownfield must have taken its cue from the water towers and grain elevators. I ate in enough DQs as I biked across the country that the company should have sponsored me. Peggy and I stopped here for old times sake.

That night, billowing dark clouds stretched across the sky. There was a tornado watch on, the first of several I would face. To prepare myself, I went in search of a beer. Unfortunately, Brownfield was a dry town. Blue Laws were still in effect and there was no booze available, at least publicly. I’m pretty sure that 99%, or more, of the adults in town drank. Luckily, someone directed me to a liquor store drive-through a few miles outside of town. The clerk laughed when I rode my bike through. As I recall, they only sold their beer in cases or six-packs. Darn.

There was a spectacular thunder and lightning storm that night, but fortunately no tornadoes. I only had to drink three beers out of the six-pack.

I awoke to a clear, warm day and bicycled 47 miles into Post, a town that had been founded by CW Post of cereal fame in 1907 as a utopian experiment. There were to be no whores or alcohol in town. People could eat all the cereal they wanted. Post was something of a fanatic when it came to breakfast food.  He thought his Grape Nuts product could cure appendicitis. (Don’t try this at home, kids.) 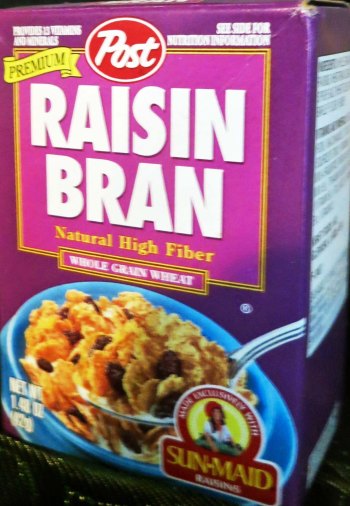 CW Post founded the town of Post, Texas on 200,000 acres he bought from the cattle baron John Slaughter.

Post picked up his ideas on the curative properties of his products from another cereal magnate, John Harvey Kellogg. My favorite health food advocate of the time, however, was the Presbyterian minister, Sylvester Graham. The good reverend thought his creation, Graham Crackers, would curb people’s sexual appetites.

It’s something you might want to think about the next time you scarf down a S’more. 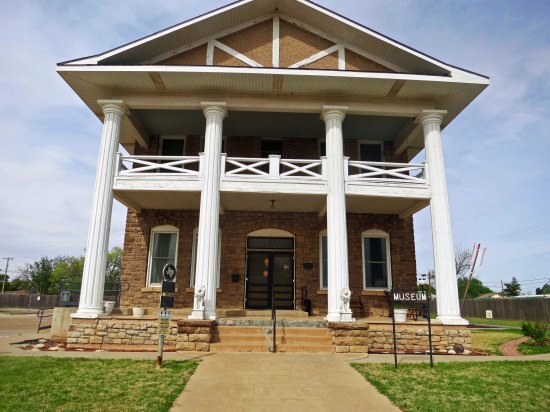 The Garza County Museum in Post is housed in what was once a sanitarium built for the town by its founder. The museum was  full of almost everything imaginable. Following are a few examples. 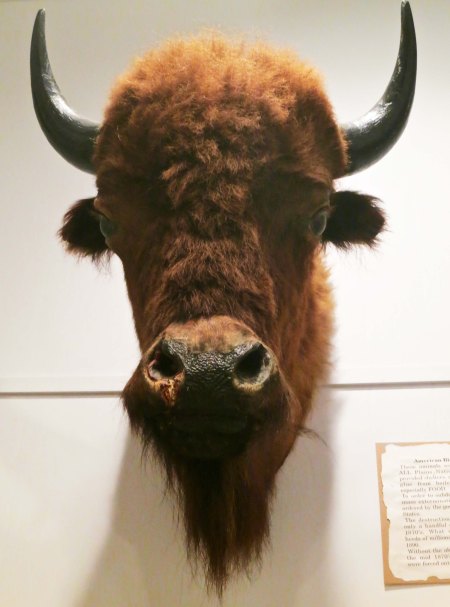 There is nothing particularly unusual about finding a stuffed buffalo head in a western museum. But I found a quote on the sign quite disturbing:  “In order to subdue the Plains Indians, mass extermination of the buffalo was ordered by the US Government.” To the degree this is true, it is a dark moment in US history indeed. 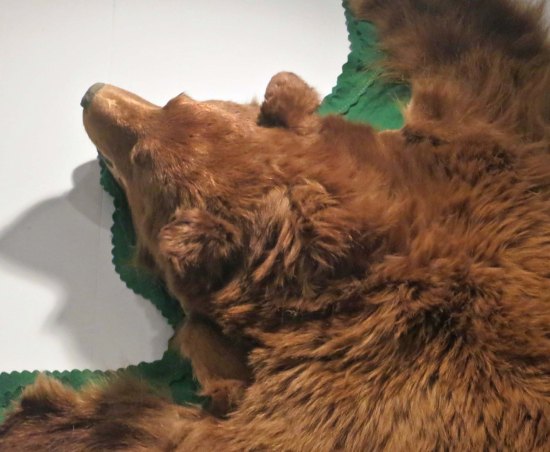 There was also a bear rug. My toes, unbidden by my more rational mind that thought ‘poor bear,’ wanted to bury themselves in the fur. 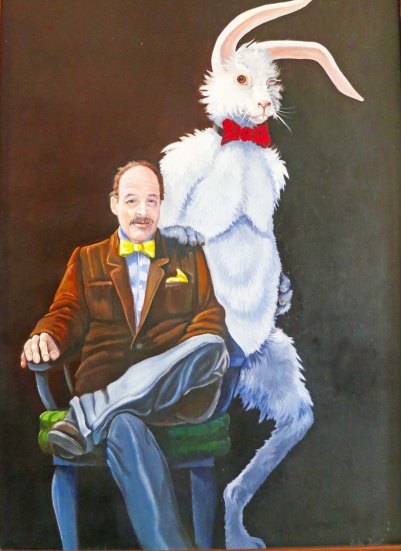 I’ll close today with Harvey, the rabbit. I am not sure how he made it into the Garza County Museum, but there he was, all six feet three and one half inches of him. Originally, Harvey was an invisible rabbit who starred in a 1950 movie with James Stewart.

NEXT BLOG: I leave Post and find sizzling heat, high winds, and a misplaced rattlesnake.

A final note: A friend of mine who lives in Alaska, David McElroy, has recently finished a book of poetry, Mark Making, that is now available for preorder. David somehow combines working as a bush pilot and extensive travel with writing poems. According to the publisher:

I quite enjoy his work, and you may, as well. If you are interested, here is the preorder information. When you arrive at Finishing Line Press, just type in Mark Making in the search box at top. 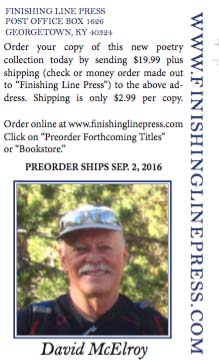