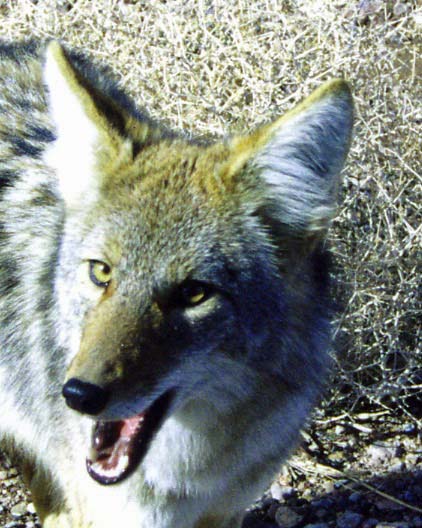 A coyote ran along beside me for a short while as I rode out of Death Valley. Here’s a shot of a Death Valley coyote saying , “Feed me!” (Photo by Peggy Mekemson.)

I struggled with what to title this blog; Death Valley to Las Vegas seemed so ordinary.  I played with titles like ‘from wild to whacky’ and “from the sublime to the stupendous” but gave up. How do you compare Death Valley with Las Vegas? Is it even possible?

I wasn’t thinking about Las Vegas when I cycled out of Furnace Creek. There was another hill to climb. Not bad, just long— maybe 20 miles, and low gear the whole way. I cycled past Zabriskie Point and Twenty Mule Canyon, slowly. There was plenty of time to appreciate the scenery.

A view of Twenty Mule Canyon as seen from Highway 190.

Another view of the Canyon.

At one point, a curious coyote trotted along beside me in the bushes. A few minutes persuaded him I wasn’t going to slip him a snack. Coyotes are animals of opportunity when it comes to meals. The National Park has a strict rule on not feeding them. One time, Peggy and I were coming into Death Valley from Beatty, Nevada and a coyote was sitting beside the road just outside of the boundary, looking hungry. We laughed and stopped to snap its photo. Did the wily fellow (remember Wile E. Coyote and the Road Runner) know that tourists were fair game before entering the park?

Eventually I crested the hill I had been climbing and cycled down to Death Valley Junction. Twenty or so people live in the area. The town population sign announces less. Beside it’s minimal population, the Junction’s claim to fame is an opera house. I didn’t hear any arias, not even ghostly ones, but I was able to refill my water bottles.  I made my own music by blowing into the bottles. Leaving town, out where no one but the jackrabbits could hear me, I belted out O sole meo.

From Death Valley Junction, it was a straight, very flat 20-mile ride into Amargosa Valley and Highway 95. Along the way, I passed into Nevada. My adventure had truly begun. No one was around to help me celebrate except a far-distant free range cow. Or maybe it was a burro. Whatever, I mooed at it.

Highway 373 leading into Amargosa Valley was straight and flat. See any cattle or burros?

Peggy and I found this large cow along the highway as we retraced my bike route. It wasn’t there when I biked through the area. I think I would have spotted it.

Highway 95 is Nevada’s main (only) road connecting Reno, Carson City, and Las Vegas. I stopped at the junction and decided to call it a day. A small restaurant/casino promised food and entertainment. A rest stop provided bathroom facilities. A bar across the road pointed out I was in ET country. Area 51 was near by. What more could a lone cyclist ask for? I biked over to the restaurant, downed a chiliburger, and was entertained by a seasoned waitress. “Where you headed, Honey?” Afterwards, a friendly video poker machine paid for my dinner. As dusk approached, I found a hidden area behind the rest stop and took out my ground cloth, sleeping pad and sleeping bag. I went to sleep looking for flying saucers zipping across the sky. 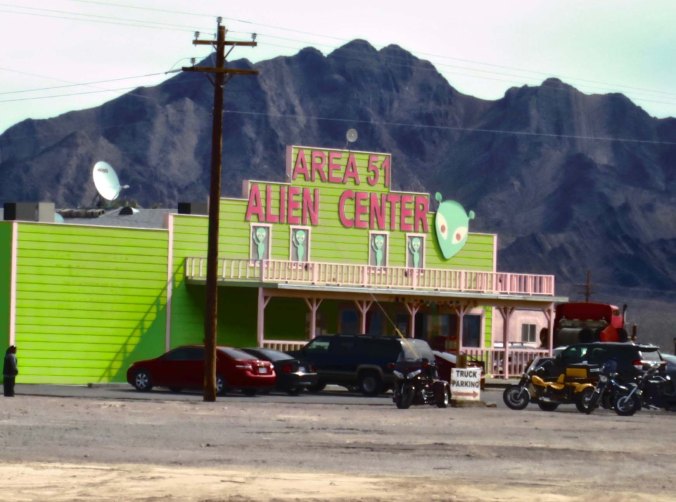 ETs and Area 51 have become tourist attractions in Southern Nevada. This establishment is in Amargosa Valley on Nevada Highway 95. The more you drink, the more aliens you see.

The actual Area 51 is a hundred or so miles across the desert. Peggy and I visited the area on one of our trips. I don’t think the government wants you on the site.

I was up early the next morning and on my way to the neon jungle— sin city. There really wasn’t much reason to hang out in the bushes behind the bathrooms, as I am sure you will agree. I did stop for a quick breakfast and chat with my favorite 70-plus waitress. “I see you are on your way dear. Can I ride along on the back?” “Only if you pedal, honey.” “Oh, I have something to peddle, alright. Is that what you have in mind?” I laughed and left a generous tip.

My video poker machine beckoned as I went out the door. It wanted its money back. “Not today,” I told it and patted it fondly.

Twenty-five miles or so down the road, I came on a bizarre sight for the middle of the desert: protesters. I thought maybe my lonely hours on the road were beginning to take their toll and I was seeing a mirage. But the protesters were real and they had a serious mission; they carried “Ban the Bomb” signs. Nevada’s nuclear test site was just off to the east and protests over America’s nuclear bomb testing program had been going on in the area for years. Seventy-five people had been arrested there the week before on Palm Sunday. Government records later revealed that over 37,000 people had participated in the test site protests with some 15,740 arrests made, including the likes of Carl Sagan, Kris Kristofferson, Martin Sheen, and Robert Blake.

As a child growing up in the 50s, I remember witnessing one of the first atom bomb tests in Nevada— from our home in the Sierra foothills! My brother, sister and I got up with our parents at some time in the wee hours in the morning and held a countdown. The whole southeastern sky lit up. Guests staying at hotels in Las Vegas actually got to see the tale-tale mushroom clouds from this and later tests. Strange entertainment indeed. I am sure the casinos protested; it took time away from gambling.

Peggy and I revisited the site a year ago. We took the exit off the road toward Mercury. Nothing was marked on the exit sign except “No Services.” A couple of hundred yards in, not visible from the freeway, a large sign demanded that we stop. Military property existed on the other side and all sorts of bad things would happen to us if we trespassed. No photographs were allowed. Suddenly a black SUV was parked next to us. We had no idea where it came from. A man in dark glasses and a suit, looking suspiciously like a character out of Men in Black, was demanding to know what we were doing and insisting that we turn around and get out of there. “We’re on our way,” I announced. As he drove off, I got out and took a photo of the sign, an admittedly small contribution to the protests of yore.

The sign at the Nevada Nuclear Bomb Test Sight.

I didn’t make it to Las Vegas that night on my bike trip. It was well over 100 miles. My conditioning was coming along fine, but not that fine. The next day I cycled in, dodged insane traffic, found a KOA that wasn’t afraid of someone carrying a tent, and settled in for a layover day. My bike wanted a tune up and I wanted a day on the Strip.

While Las Vegas has changed extensively over they years, it has retained its purpose of separating you from your money. Early casinos, like the Nugget, suggested you would be taking gold home. 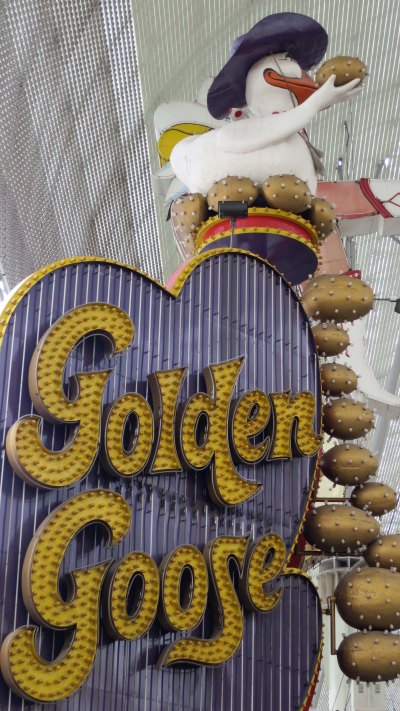 Today’s emphasis is more on Las Vegas being a resort destination, somewhere you might take the family. The strip now features such places as Paris… 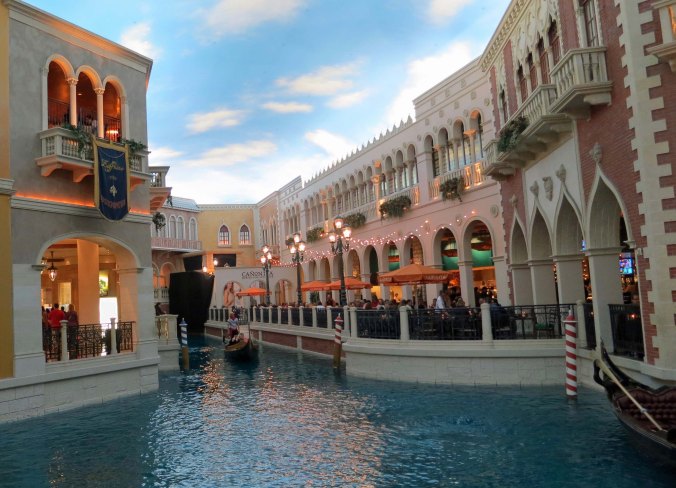 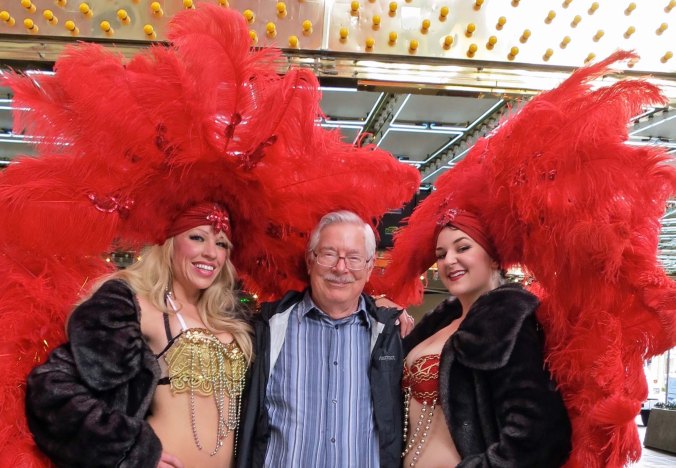 Show girls have always been popular. (Photo by Peggy Mekemson.) 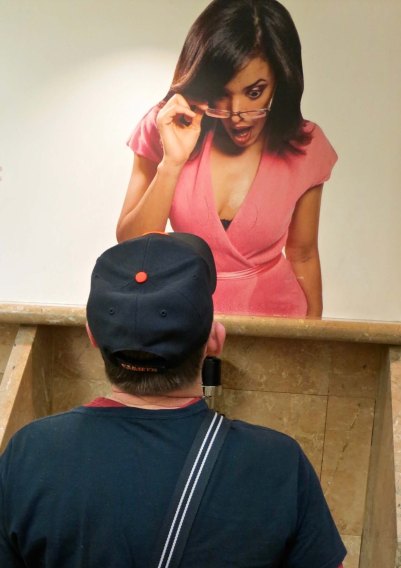 The city has always had a whacky side…

As demonstrated by this and the last photo.

Note: All of the above photos were all taken during our present trip or on previous trips through the region. You may recognize some photos from earlier blogs I have posted.

NEXT BLOG: Join me as I make my way into Arizona and onto Historic Route 66.