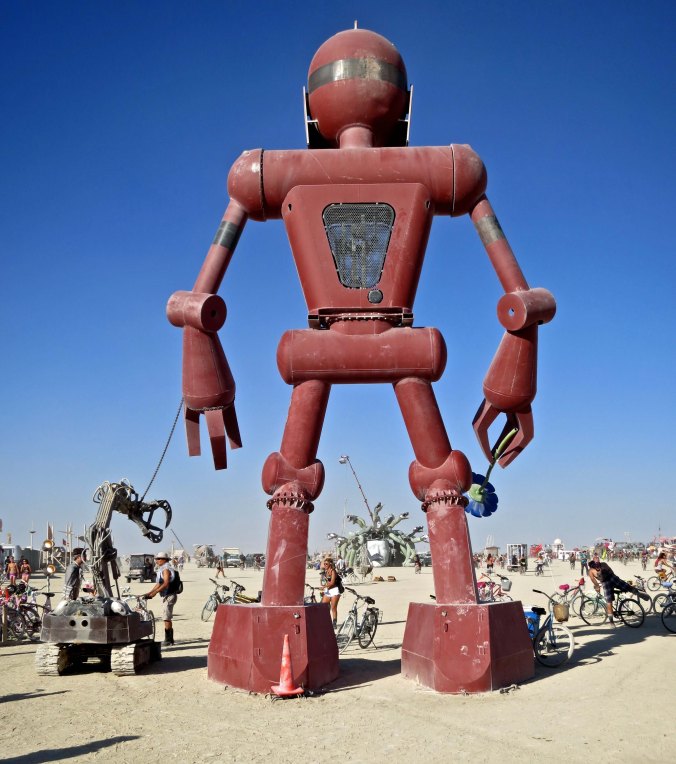 Just a 30 foot robot boy walking his robot dog at Burning Man 2015. The boy holds a flower in his right hand that he raises up to his nose and ‘smells.’ The endless creativity at Burning Man has brought me back to event time and again over the years.

I’ve been making the trek out to Black Rock City since 2004 and blogging about the experience for the past five years. Today marks the beginning of my series on the 2015 Burning Man event (along with more general stories). I’ve waited until now because January and February are the primary months when people will make their decisions about going in 2106 and begin to scramble for tickets.

Newbies, or Virgins as they are known on the Playa, are now scrambling around for every scrap of information they can find. Veteran Burners are thinking fondly of past years, or rambling on about the good old days— back when the Man was young and wild, back before he became an international icon and media darling, and back before Silicon Valley giants, Hollywood Stars, and other one-percenters started landing on the Black Rock Desert in their private planes.

If you’ve read my past blogs on Burning Man, you know that I am a big fan of the event, particularly of the art and creativity it generates. But I don’t make the decision to go lightly. Getting there can be expensive and cleaning up afterwards is always a chore. I can live with these challenges, however; they come with the territory. It’s obtaining a ticket that drives me wacko. BMO, the Burning Man Organization, has yet to figure out a way to make the experience painless or even fair. The challenge is that there are a lot more people who want to go than the 70,000 Bureau of Land Management limit.

I blogged last year about my Kafkaesque experience in trying to get tickets. I only ended up going because of the persistence of my friends Tom Lovering and Don Green. Tom found two tickets and a vehicle pass that weren’t outrageously priced (scalped) on Craig’s List the day before the event. Don made an hour trip from his home in Lafayette California to South San Francisco with a thousand dollars cash in his pocket to meet a guy he had never met at a Starbuck’s he had never been to— at midnight.

I had one day to get ready. Food for eight days had to be purchased, 40 gallons of water loaded, the van and bike prepped, baby wipes packed, and a load of gear ranging from goggles to costumes gathered up from numerous places around the house. Because Peggy had just returned from touring Cotswolds in England, she opted out of Burning Man. It was all about me. I scrambled.

Late-morning on Saturday found me waving goodbye to my best buddy. I was on the road to Burning Man! People come from all over the world to attend the event. Some travel thousands of miles. My trip is a mere 300, a short journey of around six hours. From Medford, I cut across the Cascade Mountains to Klamath Falls and then travelled southeast to Alturas in the remote northeast corner of California, cowboy country. I then crossed the Warner Mountains to the town of Cedarville, a small enclave that sits on the edge of the vast and lonely Nevada desert of the Great Basin. It is the final jumping off point for most Burners travelling to Burning Man from the Northwest US and western Canada.

Businesses along the route to Burning Man have learned that Burners are a potential source of income. Pappy Gander’s Restaurant in the small town of Merrill, Oregon has a Burners Welcome sign.

I stopped for lunch at Pappy’s and was amused to find this ‘duck decoy’ painting. BTW, that’s a mallard holding the shotgun.

I opted to spend the night at Cedarville, as I usually do. I prefer arriving at Burning Man during the day. Plus I like Cedarville. The folks in the small town welcome Burners with open arms. (We’re an important part of their local economy. A gas station owner once told me he obtains 50% of his annual income during Burning Man week.) An even better reason for staying was the Modoc County District Fair was underway, and I love county fairs. I parked Quivera (our van) next to the small town park where I planned to spend the night. I asked some folks coming out of a local church if the local sheriff would hassle me. “Hopefully he has better things to do with his time,” a man told me. “If he does bother you, just drive around the corner,” his wife added.

I quickly walked the two blocks to the fair entrance where I paid three bucks to get in. It would be hard to imagine a better use of my money. A three-person band was playing Pistol Packing Mama and other country-western classics in a free outdoor concert. I sat down on a wooden bench and listened. Pigs, goats and sheep greeted me at the animal barns. I wandered around looking at kids’ art, prized vegetables and other treasures that fill county fairs. I even said hi to Smokey the Bear before I returned to Quivera. I went to sleep to the sound of stock cars roaring around in the Annual Mud Race. It would prepare me for the nightly noise of Burning Man.

A horse came galloping across a pasture to greet me as I walked to the fair and gave me the eye. If I understand horse language correctly, it asked, “You wouldn’t happen to have a carrot in your pocket, would you?”

I sat under this attractive cover as I listened to Pistol Packing Momma. The barren looking mountain in the background is part of the Warner Range.

Goats have always been one of my top reasons for visiting county fairs. This fellow was very curious about my camera. Shortly afterwards he tried to nibble on my shirt.

Pigs are also a major reason I visit fairs. I like to arrive when they are eating but missed this time. Still, their curly tails more than justified my visit. You might say they were hamming it up.

I often skip the sheep barn, but how could I resist taking a photo of them all dressed up? They were ready for a fashion runway.

You usually have to go to an Elementary School to find great art like this. I’m serious.

And how about these prize onions? A local farmer probably grew these in her backyard garden. 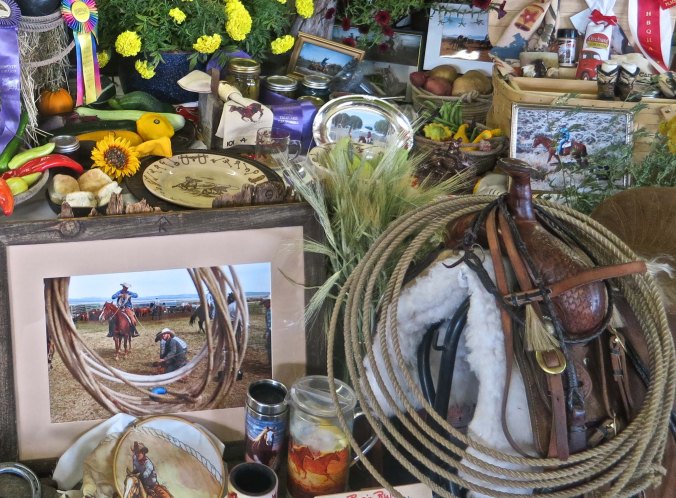 And finally a challenge. Less you have any doubt that this is horse and cowboy/cowgirl country, how many horses can you find in this collage?

I was up early to make the 80-mile drive across the desert to Gerlach, which is just ten miles from the entrance to Burning Man. Tom had said he and Don should arrive around 8 from Reno. I think they made it by 11. I hung out and watched thousands of Burners pass through town. It took us a couple of hours to make it the last few miles. I was sort of reminded me of being stuck in a LA freeway traffic jam. Almost.

Once you leave Cedarville and a couple of other even much smaller towns, this is the kind of country you see on the way to Burning Man. 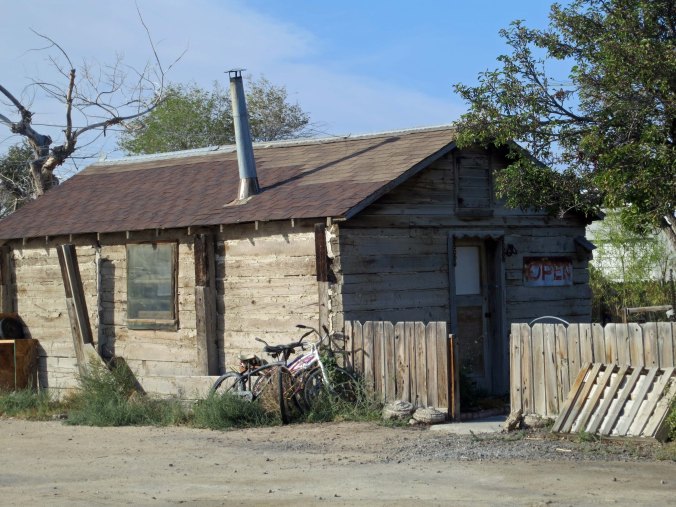 For 50 weeks out of the year, Gerlach is a quiet town with about as much action as you see in this photo.

For one week out of the year, however, its streets are packed with Burners and thousands of vehicles of all types, sizes and shapes pass through the town. As the sign notes, Gerlach is the last chance to pick up any vital supplies, such as beer or water. 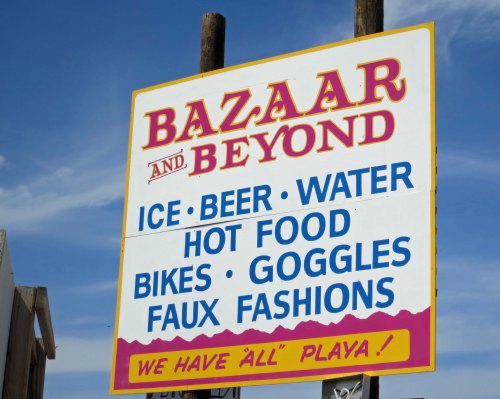 A large Bazaar (for Gerlach) is placed on the edge of town to supply almost anything a Burner might need, including…

Fine used bikes ideal for traveling across the dusty playa…

And the latest in Playa wear.

So let’s say you reduce the number of RVs and bikes, put down pavement, and eliminate the dust storm, couldn’t this resemble a traffic jam on a LA freeway? 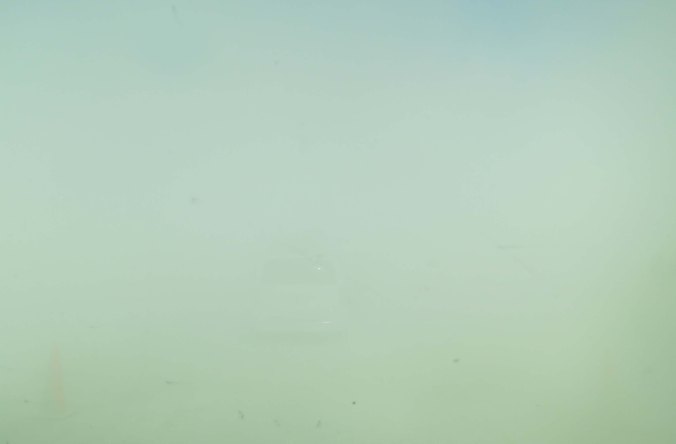 And then the dust storm hits. You can barely see the car in front of you. Can you imagine what might happen on that same LA freeway? In an hour or so we might even make the last three miles into Black Rock City.

NEXT BLOG: We arrive in Burning Man and I introduce the 2015 theme: A Carnival of Mirrors. Welcome to the circus.