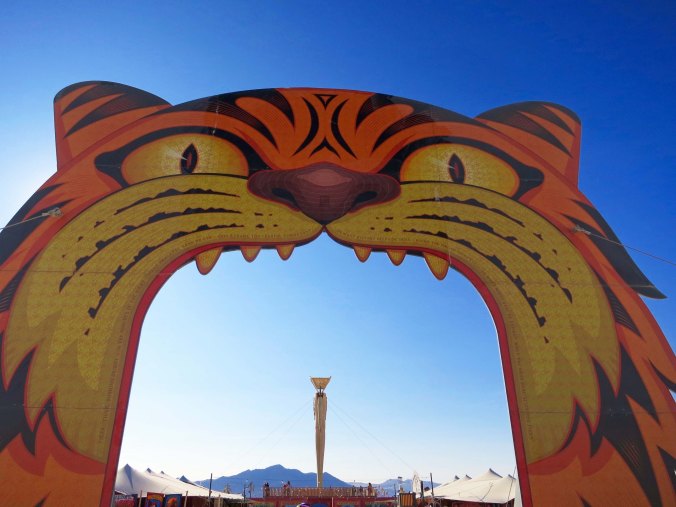 One of four gateways to the 2015 Burning Man Carnival. William Blake’s poem “Tiger, tiger, burning bright, In the forests of the night, What immortal hand or eye, Could frame thy fearful symmetry?” was printed around the edge.

Larry Harvey created the first theme for Burning Man in 1995, ten years after he had co-founded the event. Ever since, he and his crew have been churning out a new topic every year. I picture him sitting somewhere in San Francisco, puffing away on his ever-present cigarette, and waiting for inspiration to strike. Finally, the proverbial light bulb flashes. Why don’t we make this year The Nebulous Entity, or Caravansary, or Beyond Belief? It would be interesting to track Harvey’s thought process.

The first theme was Good and Evil. Undoubtedly, there were costumed angels and devils wandering all over the Playa and Black Rock City. There still are. I recall one year when every other woman seemed to have sprouted wings. Maybe there was a sale on. I ran into a bit of good and evil myself at 2015’s Burning Man. I spun a wheel of fortune and was told, “you will soon discover if you are the good twin or the evil one.” Did I really want to know? Later I found a graphic sideshow poster of how it might look.

A wheel of fortune at Burning Man suggested I would soon find out whether I was a good or evil twin. 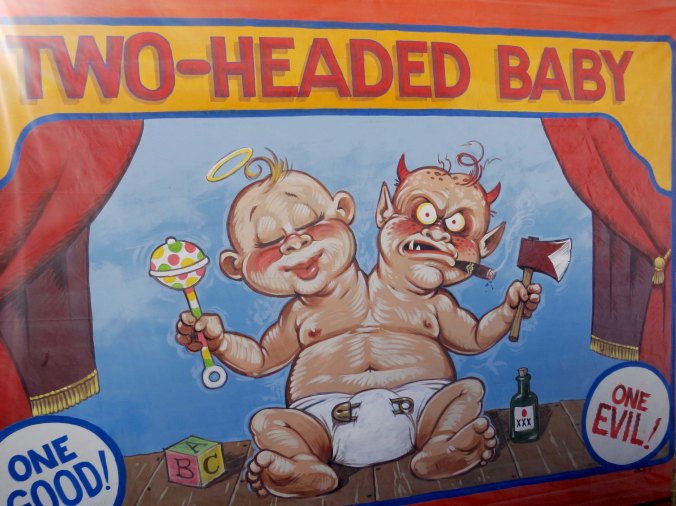 I must say, being evil looks a bit more interesting. Carnival or sideshow art has been used for over a century to pull people into sideshows where all sorts of unusual sights are promised.Vintage original art is now worth thousands of dollars to collectors.

Burning Man invites individuals, groups and artists to participate in and interpret its annual theme through their costumes, camps and creative works. Here’s a complete list of themes since 1995:

The 2015 theme was built around the concept of carnivals and mirrors. A city of tents grew up around the Man featuring carnival posters, mirrors and games of chance. Four large gateways invited Burners in to where hucksters pushed their games of chance, or just strangeness. I checked my image in each of the mirrors but skipped the ring toss where the posts took on a definite phallic look. I stopped to watch a show where a talented acrobat displayed her skills, and I helped pull ropes that made a giant skeleton dance.

A devilish gateway into then Burning Man Carnival. Note: I arrived early at Burning Man this year before the crowds gathered. Many of the Carnival attractions and other installations throughout Black Rock City were still being set up.

I found this humorous guy hanging out inside.Nice tongue.

Taking a page from Dante’s Inferno, this circus elephant gateway switched the words from “Abandon all Hope” to “Abandon all Despair.”

The fourth gate into the carnival was this nerdy looking young woman. 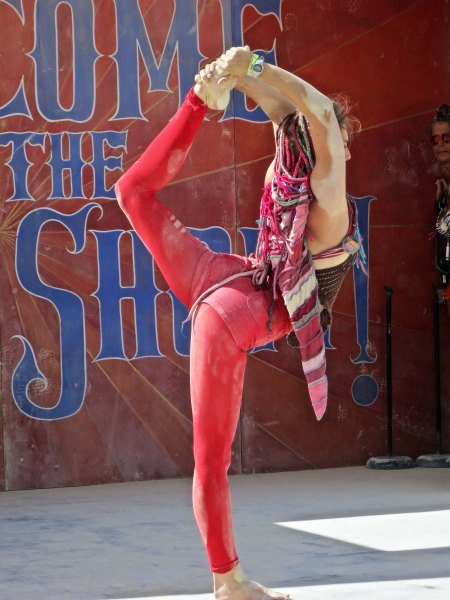 A stage in the carnival featured ongoing shows such as this flexible acrobat.

A large skeleton puppet had ropes that Burners could use to make the skeleton dance. Carnival poster art surrounded the Man and what Burning Man called its Fun House.

Following are three sideshow posters that I found particularly amusing including this two-headed tattooed cat.

And a Playa Chicken.

My friend Don Green took this photo of the Fun House entrance. I will be featuring many of Don’s photos throughout this series. 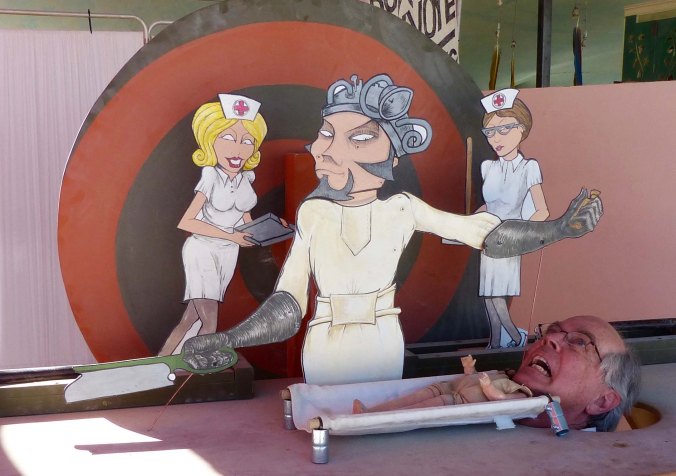 Don seems a little worried about the doctor that was prepared to operate on him in one of the carnivals side tents.

I was taken with the detail in this painting that welcomed Burners into the Fun House. (See Don’s photo of the entrance above.) 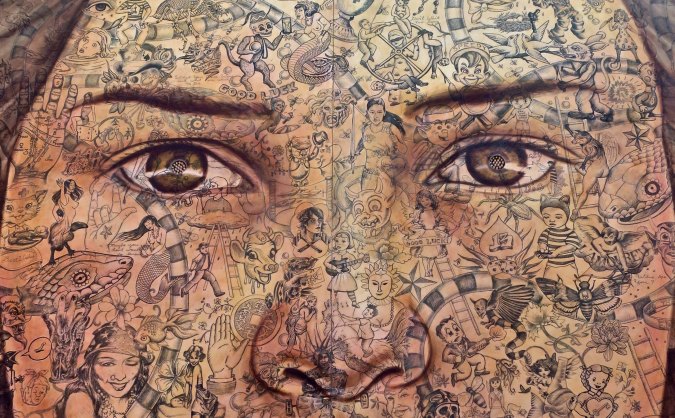 A closeup of the face. 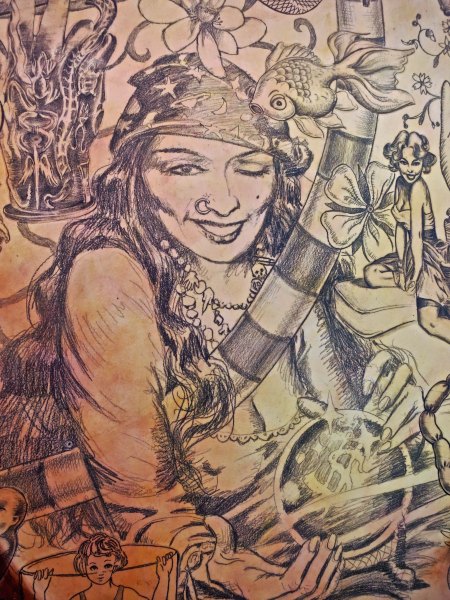 And even closer shot featuring a gypsy woman with her incredible detail. 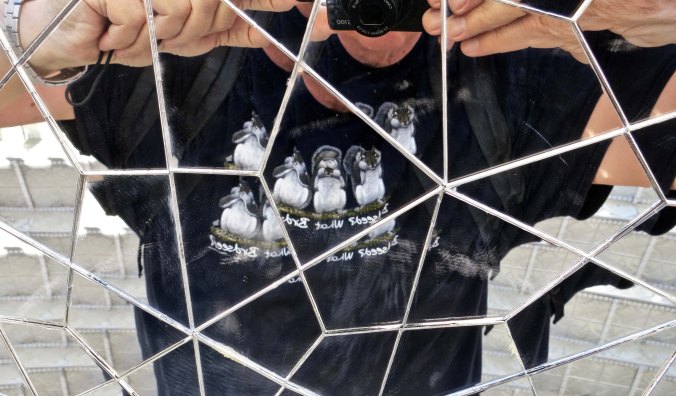 Various mirrors welcomed Burners inside the Fun House. I took this fractured mirror selfie of my see-no-evil, speak-no-evil, hear-no-evil squirrels  T-shirt. The backward caption is “Birdseed, what birdseed?”

A final shot for today, this one looking up at the Man from inside the Fun House.

The 2016 Theme, “Da Vinci’s Workshop,” is designed to draw a parallel between Medieval Florence and Burning Man in terms of art, technical innovation, and patronage. (No one has ever accused Larry Harvey of being shy, modest, or lacking in ambition when it comes to promoting Burning Man, but seeing Black Rock City as the equivalent to Florence, and as “the epicenter of a new renaissance,” is something of a leap.)

Still, the art being inspired by Burning Man is very impressive. And the 2016 Man being “surrounded by a public square, a piazza lined with workshops, each representing a guild…” with the guilds being “self-invented and devoted to the interactive manufacture of whatever participating artists and inventors can imagine, ” sounds like fun.

NEXT BLOG: We will travel into Black Rock City and out into the Playa to explore other ways the 2015 theme of Carnival and Mirrors was represented.