Alfred Hitchcock’s film, The Birds, is forever entwined in the history of the small town of Bodega, California where parts of it were filmed. A mannequin of Alfred Hitchcock welcomes people to the town. Got Birds?

I like birds. We feed a lot at our home nestled up against the Siskiyou  Mountains of southern Oregon. As I write this, I am looking out at our backyard bird feeder. It’s being stormed by Chickadees and Oregon Juncos. A couple of weeks ago it was sparrows. They attacked in mass, emptying the feeder in record time. Not only were they greedy, they were messy. As many sunflower seeds fell on the ground as went into their tummies. Scrub and Stellar Jays gobbled up the escapees, aided and abetted by a fat gray squirrel and two turkeys.

I look out on the bird feeder from my writing chair. It provides endless entertainment. You never know who might be hanging out. Deer often sleep under it. This morning they were up the hill. Earlier we had counted 1o bedded down on our road and the hillside.

Interest in the bird feed goes beyond birds as this gray squirrel demonstrates. It shimmied up the pole, which was quite humorous as he kept slipping down. 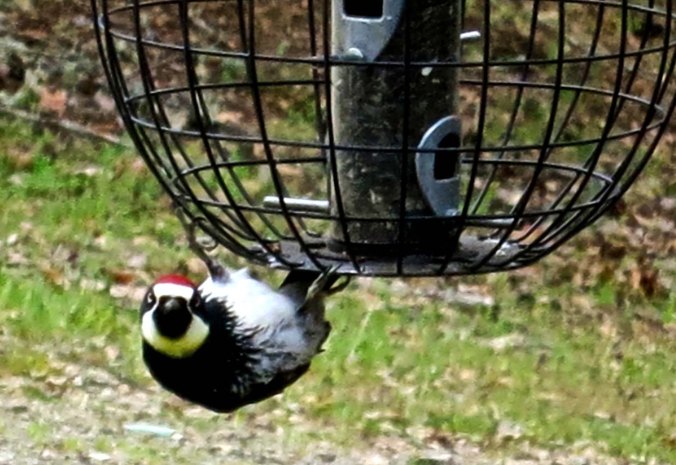 I caught this Acorn Woodpecker earlier in the year. I was impressed with his Linda Blair ability to swivel his head all the way around and give me the evil eye. He would have made a great extra for Hitchcock’s film.

I went out to replenish the feeder and was roundly scolded for interfering. By everyone. When I returned with more sunflower seeds, the sparrows decided they had waited long enough. They flew down from the Madrone tree and directly into the feeder, which I was still holding! Surprised and amused, I put the feeder down, rushed inside, and grabbed my camera. Peggy wasn’t home so it would have to be a selfie. Soon I had birds perched on my head, shoulders, hands, and even on the camera. Unfortunately, their fluttering and jumping around, made photography difficult, to say the least. Luckily, a few paused to eat. 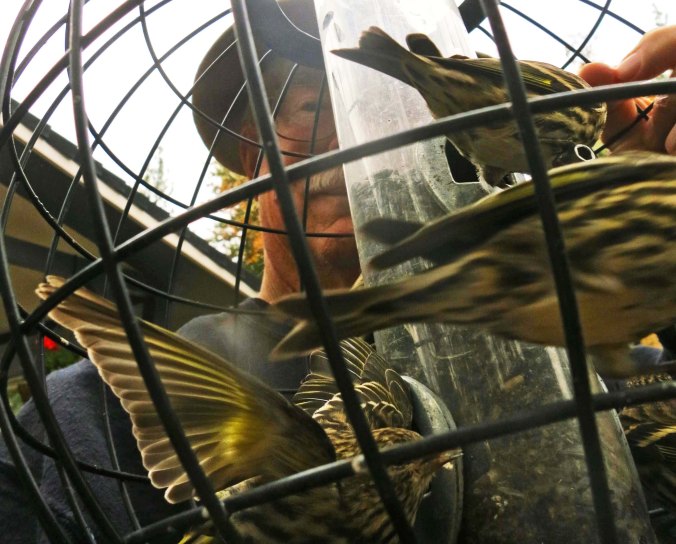 With one hand holding the feeder and my other hand my camera, I worked to catch a photo of the busy sparrows.

The birds reminded me of my experience in August when I visited the small town of Bodega, which is just inland from the larger town of Bodega Bay on the north coast of California. Alfred Hitchcock had come here in 1961 to film his classic horror film, The Birds. It’s a story about our feathered friends getting nasty and attacking people. I had watched the film when it had come out in 1963 and visited the area a few years later. It was in the fall season and the local birds were gathering in large flocks. Normally, being mobbed by sea gulls doesn’t bother me, but…

Bodega has incorporated the movie into its history and people still visit the area from all over the world to see where it was filmed. Local grocer Michael Fahmie has turned his Bodega Country Store into something of a monument to the movie. A large billboard featuring Alfred Hitchcock is on the outside of the store while the inside is crammed full of memorabilia from the movie. A Hitchcock mannequin greets visitors. I said hi to Al and went inside. Afterwards, I hiked the short distance over to the movie’s most famous Bodega sites: the 150-year-old Potter School and the nearby St. Teresa Catholic Church. In the movie, kids had run screaming from the school for sanctuary in the church, with the birds in hot pursuit. 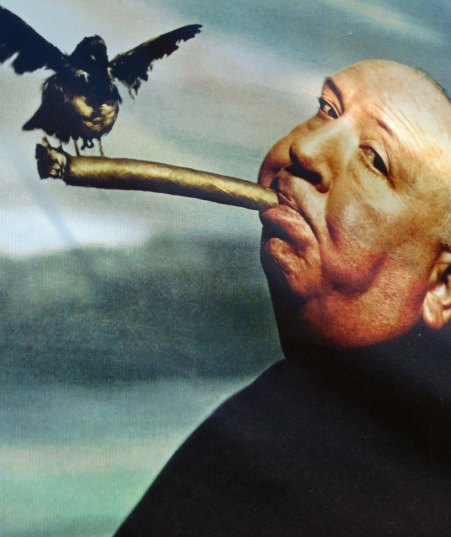 Hitchcock was always great at promoting his films. This was from the movie billboard outside of the Bodega Country Store. 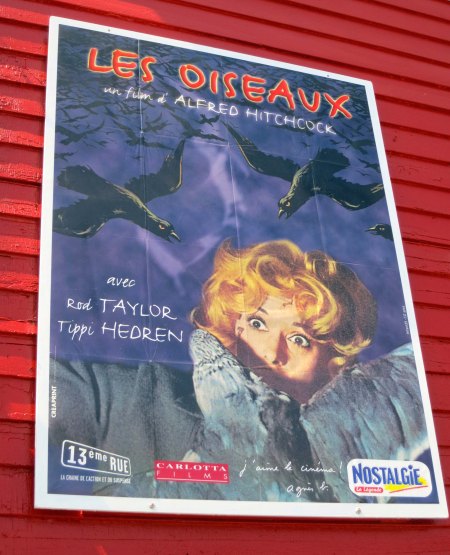 A number of film posters are found inside the Bodega Country Store. I’ve included this one featuring Tippi Hedren for my followers in France.

A film still from The Birds shows children running in terror from the Potter School (on the right). 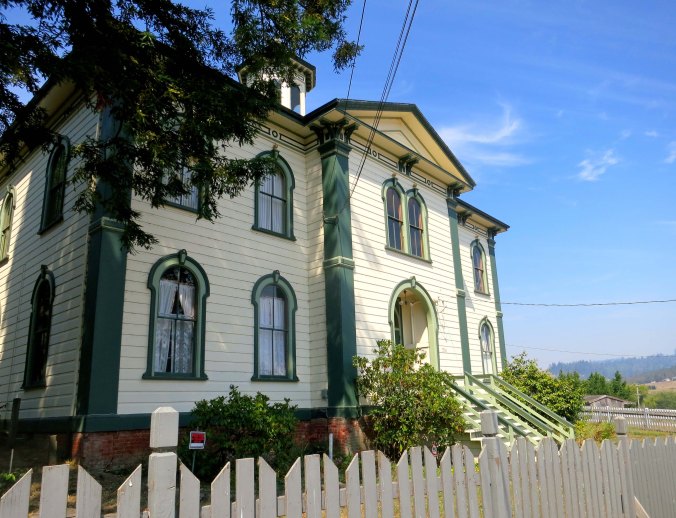 The Potter School as it looks now. Today it is a private residence.

I’ve included this photo because it shows the location of St. Teresa’s Catholic Church in relationship to the Potter School.

St. Teresa’s was already famous when Alfred Hitchcock came to town. In 1953 Ansel Adams photographed it. He’s one of my all time heroes. I couldn’t resist getting my camera out. I am not a professional photographer. Mainly, I have fun. It was interesting for me to compare my efforts with those of Adam’s when I got home. The power of the Ansel Adams’ photograph is immediately apparent. It is easy to see why he is recognized as one of the world’s greatest photographers. Still, I was happy with my efforts.

My photo of St. Teresa’s Catholic Church from the back near the Potter School. 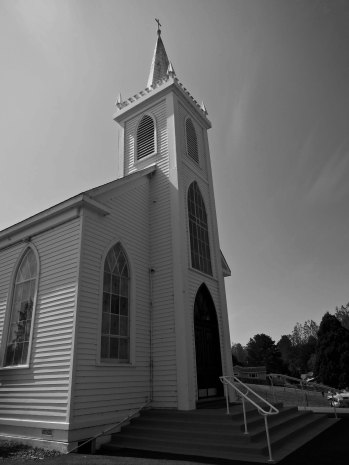 My perspective facing the church from the left. 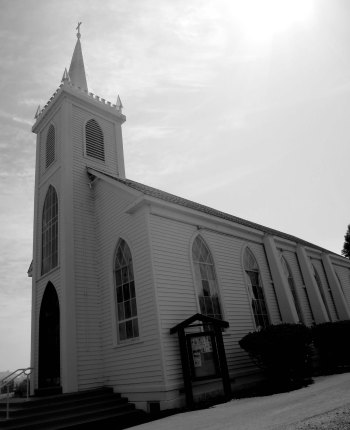 And from the right. 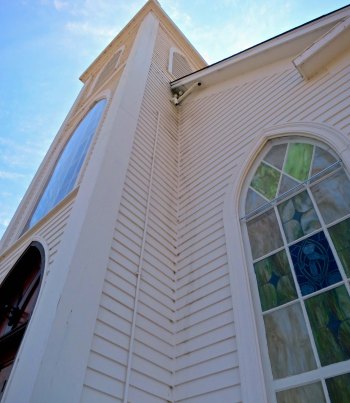 A final photo looking up from the doors.