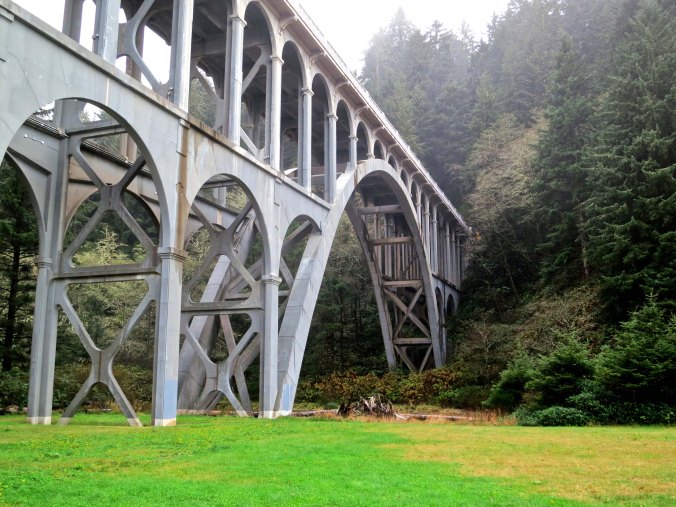 Combining form and function, Cape Creek Bridge in Oregon is an example of how highway bridges can move vehicles, provide beauty, and fit into the natural environment.

With Earth Day 2015 coming up on Wednesday, I stopped to think about the battles we fought during the 70s to protect the environment. One of the toughest was against the highway lobby—bankrolled primarily by the oil industry. “Build more highways!” it and its allies screamed. Buried under a burgeoning population of automobiles, local and state transportation agencies usually agreed. Moving cars and trucks, not people and goods, was the objective. Most traffic engineers believed that their sole task was to move vehicles from point a to b as quickly and efficiently as possible. And they did their job extremely well. Nothing got in the way, including established communities, farmlands and valuable natural habitats. It was the bulldozer era of ‘pave Paradise and put in a parking lot.’ (Joni Mitchell)

In the mid to late 70s, I was working with a community group called the Modern Transit Society (MTS) that was fighting to bring light rail transit to Sacramento, California. The City Traffic Engineer was adamantly opposed to the idea. More dollars for mass transit meant fewer dollars for highways, and the Engineer, along with his counterpart in the County, had roads and freeways planned everywhere. My role with MTS was to oversee political strategy. At one point, relations became so tense between the traffic engineer and me that he would walk out of a room when I walked in. Eventually we won. Today, Sacramento has light rail lines stretching throughout the city and county.

Bridges built at the time, and also during the 50s and 60s, reflected the mania for moving cars. Function, not form, was what mattered. As a result, large ugly concrete structures with minimal aesthetic appeal often dominated urban and even rural landscapes. Bridge construction hadn’t always been that way.

The coastal bridges of Oregon reflect an earlier era. Many were constructed in the 1920s and 30s when Highway 101 was being built to connect coastal towns. Oregon was extremely fortunate to have Conde McCullough at the helm of the highway department’s bridge division for much of this time. Part civil engineer, part architect, and part artist, he believed that bridges should be built economically, efficiently, and aesthetically. His vision lives on today, as any trip down the Oregon Coast quickly demonstrates. 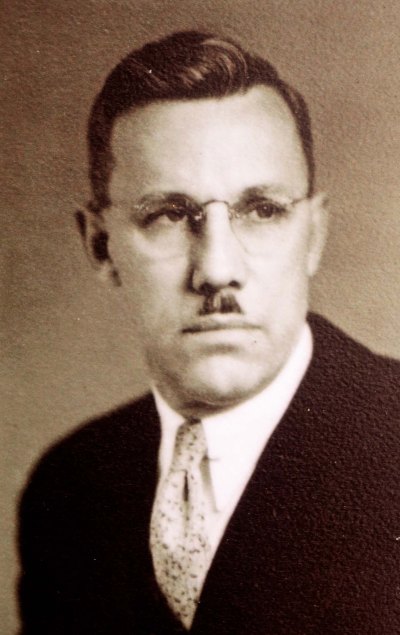 Conde McCollough served as Oregon’s state bridge engineer from 1919 to 1935, following which he spent a couple of years designing bridges along the Pan American Highway in Central America. (Photo from information sign on Highway 101.)

Today I am going to feature one of McCullough’s creations, the Cape Creek Bridge located on Highway 101 north of Florence, Oregon, and a small park that lies below the bridge. Later, I will do posts on two of his other bridges plus a modern pedestrian and bike bridge in Redding, California that is breathtaking.

Another view of the Cape Creek Bridge, this time including Cape Creek. It had been raining hard, as reflected by the creek’s muddy waters.

Looking out from a span of the Cape Creek Bridge onto the small ocean cove the creek empties into. 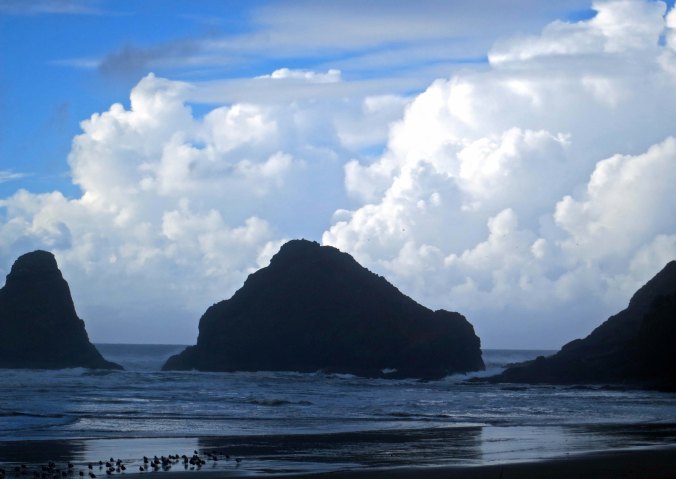 Small islands in Cape Cove outlined by the dramatic sky. Sea gulls are gathered in the lower left corner.

One of the sea gulls takes flight. I was walking along behind it, poised to takes its photo when it flew. There are three things I like about the picture: the wings, the gulls left foot as it runs, and the reflection. 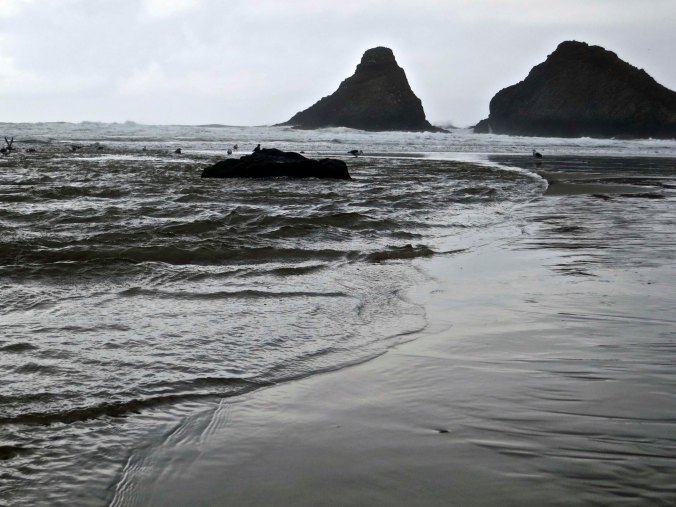 The tide rolls in to Cape Cove.

And the tide rolls out.

A final perspective on the Cape Creek Bridge. The bridge is 619 feet (188.6 meters) long and was designed to look like a Roman aqueduct. NEXT BLOG: Earth Day