The Man was still burning, refusing to fall down, when I walked back to the Center Camp Cafe. Beyond one or two people sleeping on the floor, the Cafe was empty. I was more or less alone with a number of dramatic paintings, including this one. The eyes captured me and pulled me in.

Important. 1) These are from my perspective. Other people will have different points of view. 2) I never see everything that is available to see at Burning Man. There is simply too much. So it’s quite possible that I have missed some really great things. My apologies. 3) I missed 2011. 4) These photos are not in order of choice. That is beyond me. (Grin)

Painters and photographers have always contributed to Burning Man, at least for the ten years I have participated. Many of the paintings, from my observation, have featured nature and mythical themes.

Burning Man is a photographer’s paradise. Millions of photos are taken annually and some of the photographers are quite talented. Their work is scattered across the web. One day when I was out wandering in Black Rock City, I came across Camp Montage, where a group of gifted photographers had combined various images from Black Rock City into single works. I loved the way they captured the essence of Burning Man. I’ve included two of their montages.

Mural work is everywhere and many of the murals are works in progress, especially at the beginning of the week. Blank walls demand to be filled.

The shaman of Mesoamerican cultures considered the jaguar as an essential companion or nagual on their drug induced journeys into the dangerous spirit world.

The detail on this painting featuring goddess-like women, an elephant and birds is incredible.

This underwater theme with its brightly colored creatures has always been one of my favorite Burning Man murals.Check out the giant squid and the whale (or shark, given the teeth) on the right.

This mural reminds me of dreams I had in Bali. Apparently I wasn’t eating Portobello mushrooms.

Monkey business and a message were featured on this mural. I’d be a little worried about the waves if I were driving across the Golden Gate Bridge at the time.. 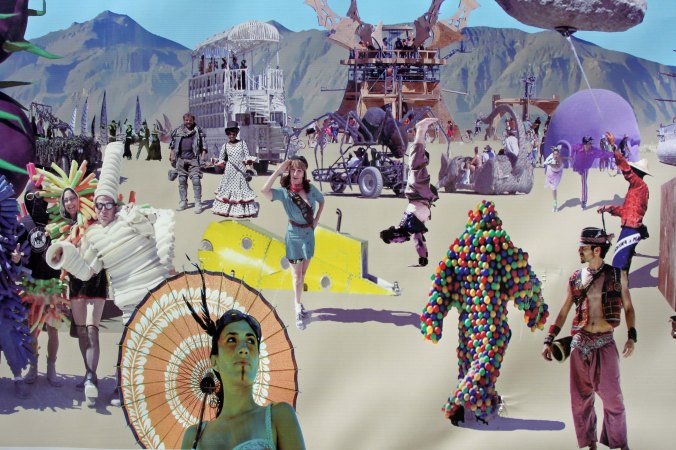 This photograph montage created by the Montage Camp is composed of a number of different photos taken at Burning Man . Take a close look. It is what you might see on a typical day. 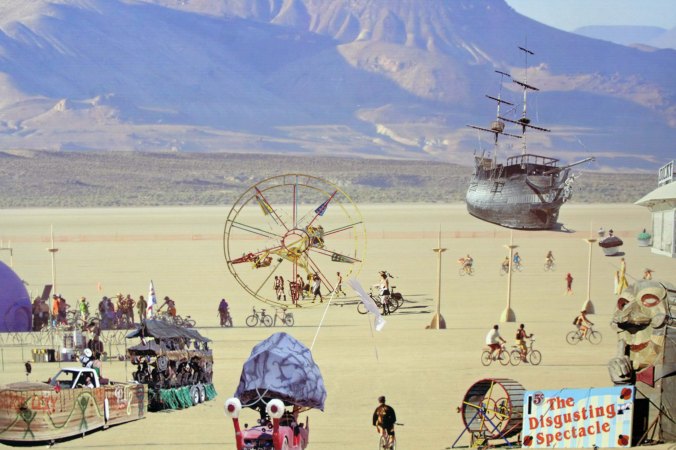 This combination of photos from Camp Montage focuses more on mutant vehicles— from the small to the gigantic. 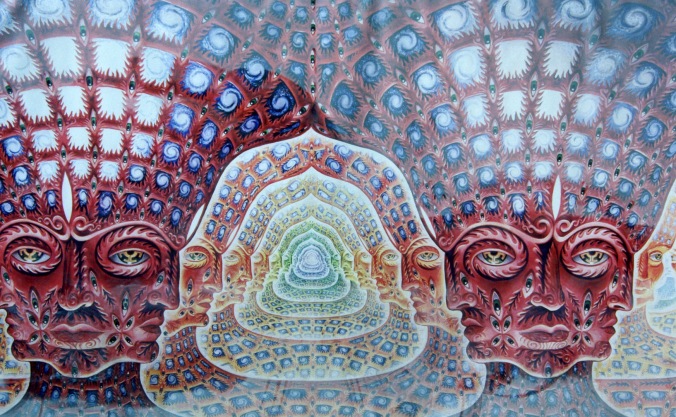 A theme camp I came across in 2006 featured large, meditative images that were backlit by the outside sun.

A mural artist dabs hair on the monkey mural shown above. 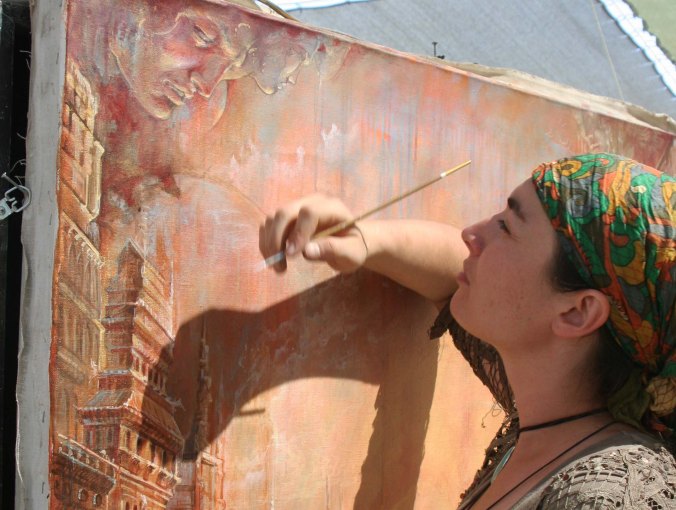 An artist works on a painting at the Center Camp Cafe.

Another artist plies his trade while a Burner looks on. These are examples where painting borders on performance art. NEXT BLOG: The Costumes of Burning Man, another form of creativity.

27 thoughts on “The Best of Burning Man: The Top Ten Series (3)… Painting and Photography”