Big birds and camp dogs, four of 1032 petroglyphs found at the V-bar-V Heritage Site in the Verde Valley of Arizona.

Sinagua rolls off the tongue easily, like so many Spanish words do. It is a name applied to Native Americans who lived in the Verde Valley between 500 and 1425 CE by the archeologist Harold Colton. Sinagua means ‘without water.’ The early Spaniards originally applied it to the San Francisco Mountains north of Flagstaff, the Sierra Sin Agua. I think they were disgusted that such beautiful mountains didn’t produce a river.

On our recent visit to Sedona, we visited two areas that did have water, however: the V-Bar-V Heritage Site and Montezuma’s well. The fact they had water made them important to the Sinagua. The V-Bar-V Heritage Site is known for its fine collection of petroglyphs— Native American rock art. Fortunately, the ranchers who had owned the V-Bar-V and ran their cattle along Beaver Creek both appreciated and protected the rock art.

V-Bar-V, by the way, reflects the ranches brand, V—V, that would have been burned onto the hide of its cattle. Branding helped identify the ranch’s cattle when they got mixed up with the neighbors. It also discouraged cattle wrestling, which was a popular way of supplementing your income in the Old West. Marketing gurus today apply the term branding to establishing your unique product, whether its potato chips or blogs.

If you been around my blog for a while, you are aware that Peggy and I really like rock art, both as an art form and for its historic context. I also find many of the petroglyphs humorous. Who know whether the Native Americans artists found them so. Most of what we know about rock art fits under the category of speculation.

The V-Bar-V site includes 1,032 petroglyphs on 13 panels, according to the archeologists who count such things. Most were created between 1150 and 1400 CE. The Sinagua packed their bags and abandoned the area in 1425 as part of a massive migration that impacted the whole Southwest for some unknown reason. Maybe a visionary shaman predicted that the Europeans were coming and would ruin the neighborhood. (Just kidding.) Anyway, the petroglyphs include zoomorphs, animal like figures, anthopomorphs, human like figures, and various geometric forms representing everything from maps to astronomy. While half listening to the volunteer led tour, Peggy and I were busy with our cameras. 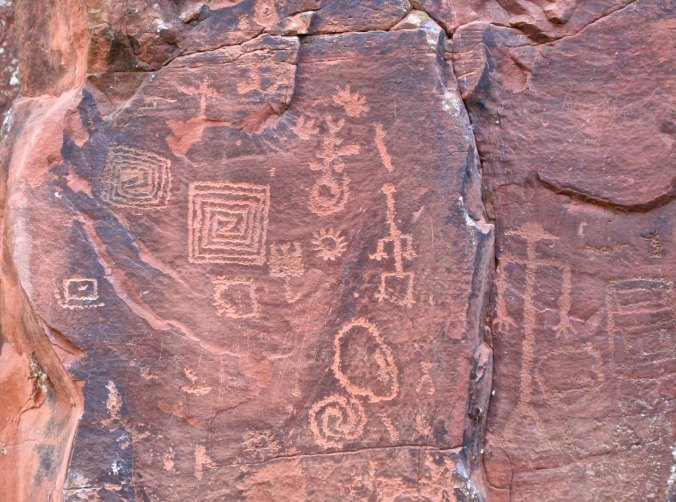 Long neck or long body? Check out the two human-like figures on the right. I often find something humorous about rock art. (Photo by Peggy Mekemson.) 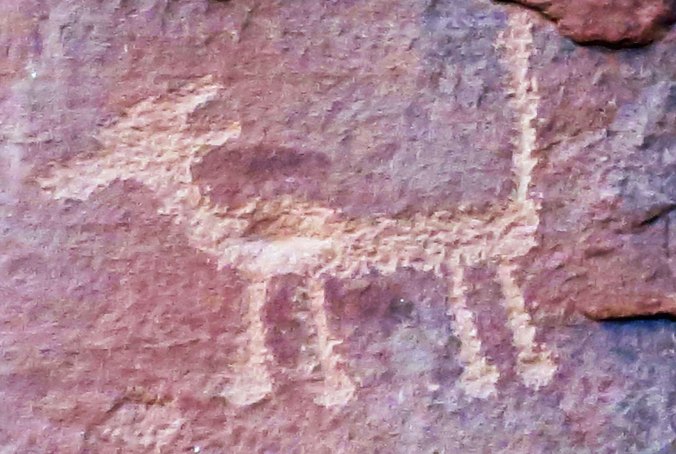 Archeologists believe the circles represent the sun and serve as a planting calendar.

The two turtles are quite impressive. But what about the couple above the turtles. My imagination tells me they are dancing.

We found Montezuma’s Well a few miles away from the V-Bar-V Heritage Site. There is also a nearby Montezuma’s Castle that we didn’t get to. The so-called castle is a large cliff dwelling. Neither the Well nor the Castle has anything to do with Montezuma, however. Think profit. Early entrepreneurs believed that stealing the famous Aztec emperor’s name would attract more tourists. So here we are back to branding. They are lucky Montezuma didn’t wreak a little revenge on them for the theft. That could have gotten messy.

The Well is actually a large sinkhole with a very productive spring in the middle that pumps out some 1.6 million gallons (6 million liters) of water each day. Given that it manages to do this in the middle of a desert and has been for several thousand years, it is no wonder the Sinagua and other local natives found the spring so valuable. The Yavapai Indians even find it sacred; they believe that their ancestors emerged from the spring. Their legend contends that nothing can re-enter the hole once it has emerged. You can’t go home again.

Scientists have learned a lot about the spring. They have been studying it for decades. For one, they believe the water originates up on the Mogollon Rim where it percolates down through various rock layers until it hits the permeable Red Wall Sandstone, which it follows south until it reaches an impermeable volcanic dike, forcing it to the surface. Fish can’t live in the water, but leeches do, thousands of them. I was not tempted to go for a swim.

Not surprising, there is ample evidence including a number of dwellings that demonstrate the spring’s early use by the Sinagua and others. As for the name, I prefer the Hopi’s name for the spring, Tawapa, which means sun spring. 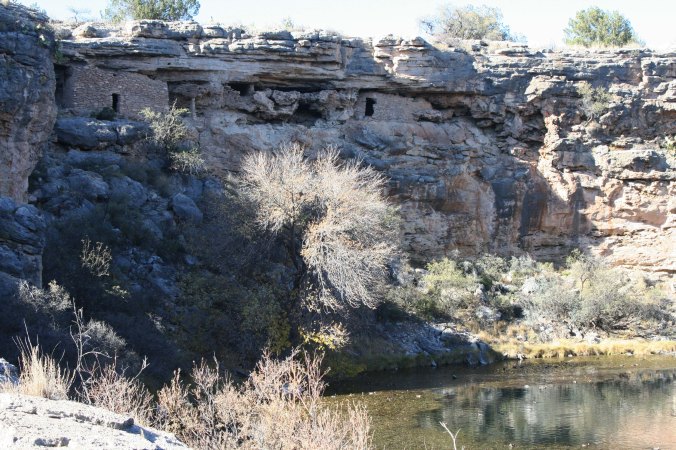 The same cliff house from a different perspective. (Photo by Peggy Mekemson.)

We found this shelter down next to the water, very well protected from the elements.

A small inlet from the spring ran next to the shelter and probably provided water. I liked the reflection shot it provided. 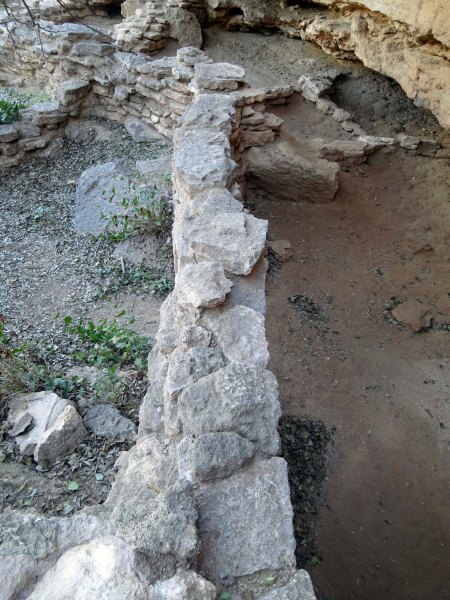 Just down the trail from the shelter, we found more ruins.

A shot from the rim of Montezuma’s Well.

I found this tree growing down in the valley below the Well. It demanded I take its picture. Native Americans farmed  in the valley with water from the spring. 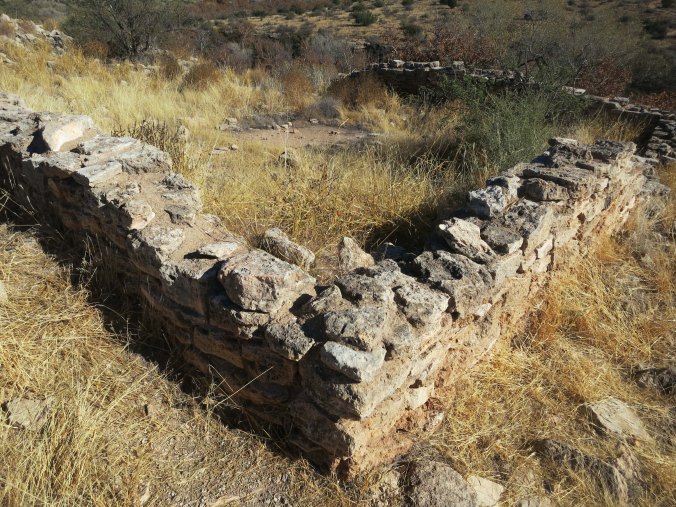 A final photo. This ruin was perched above the valley just down from the edge of the Well. NEXT BLOG: Burning Man… the 2015 theme.

21 thoughts on “A Big Bird Petroglyph and a 1.6 Million Gallon a Day Spring… The Sedona Series”