We dropped what we were doing to watch the orca family pass by our campsite. (Photo by Peggy Mekemson.)

“Orcas!” Kimberly cried out, and we all went dashing for the beach with our cameras. Kimberly liked to perch on convenient logs and rocks, looking out at the Johnstone Strait. It gave her a front row seat on the action. I get it. I can stare out at the Pacific Ocean for hours— watching the waves roll in, listening to the lonely calls of seagulls, admiring the crazy antics of pelicans, and, yes, looking for whales.

Perched on a rock, Kimberly keeps a sharp eye out for orcas.

We had barely arrived at our campsite when the first family of orcas came swimming by. We were still in the middle of tucking our kayaks away in the forest above the tide line. Everything was dropped, including the kayaks. There were whales to see.

The rallying cry of “Orcas!” sent everyone scrambling for a view.

A baby orca surfaces. Our reward for being vigilant. (Photo by Peggy Mekemson.)

This was our last campsite before heading home. Once again we had returned to Vancouver Island. We were located at Sea Kayak Adventures’ Little Kai Camp and would be there for two nights. Seeing orcas on our arrival was a good omen. We were happy campers. Not even the surround sound of fishing boats or a deluge of cold rain could dampen our spirits.

The beach at Little Kai camp.

Who can complain when surrounded by good people and beautiful scenery? But our trip was drawing to a close. After several more good meals, another kayak adventure, an evening of fun and story telling, and more orcas, it was time to pack up our kayaks and paddle back to Telegraph Cove. An orca gave us a final British Columbia send-off.

Our group works its way south from Little Kai Camp along Vancouver Island. Shortly afterwards the skies opened up and dumped buckets of rain on us. (Photo by Peggy Mekemson.)

Back at camp, I found interesting driftwood.

We were amused to find that previous kayakers had collected numerous heart-shaped rocks off of Little Kai Beach. 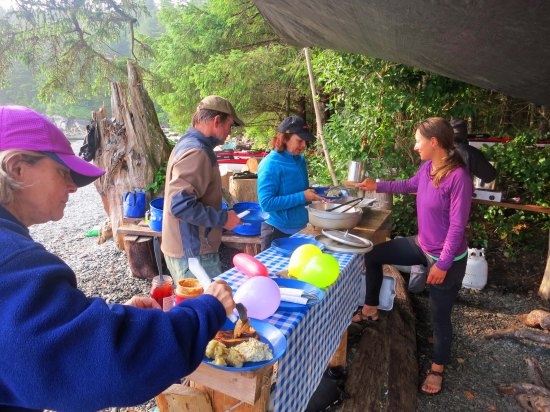 Fishing boats shattered the quiet of our campground. BC fisheries had declared an eight-hour fishing season to reduce the number of salmon trying to get up streams. Boats came from everywhere. (Photo by Peggy Mekemson.)

We wrapped up our last evening with a campfire, story telling, songs and skits.

Kayaking back to Telegraph Cove, we came on a black bear. We weren’t able to determine how he managed to get the stick lodged in his fur. Was it the shaft of an arrow? (Photo by Peggy Mekemson.) 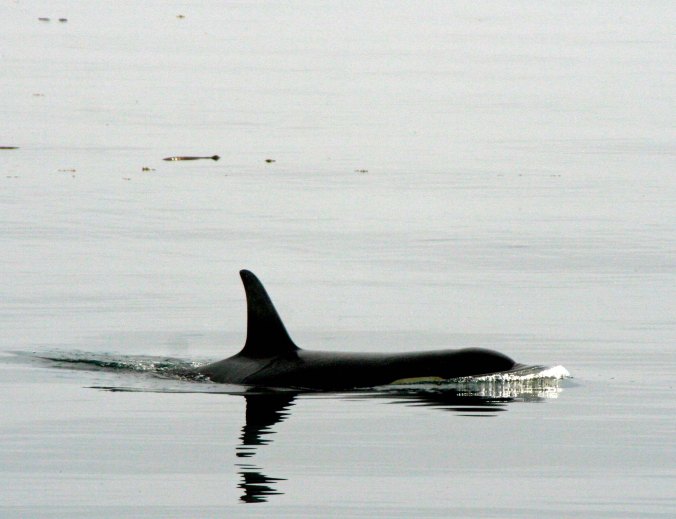 Since we had begun our kayak adventure searching for orcas, it is appropriate that I end this series with a picture of the final orca we saw. (Photo by Peggy Mekemson.)