Sea Kayak Adventures likes to stop for lunch at the beach next to Orca-Lab on Hanson Island. One of the researcher’s cabins is on the left. (Photo by Peggy Mekemson.)

“Paddle, Curt and Peggy, paddle!” Julia yelled at us across the water. The tides of Johnstone Strait between Vancouver Island and mainland British Columbia can be ferocious. And we were caught in the current— the death vortex as the guides described it. We had been futzing along behind the group, happily paddling along, and matching strokes. Matching strokes is more efficient in kayaking, and it is certainly more aesthetic. I doubled my efforts and so did Peggy, paddling fast and digging deep, not concerned about style, driven by adrenaline. What seemed like an hour later (mere minutes), we were out of trouble. Afterwards, I continued to be unaesthetic, and we moved up to the head of the line.

The day had started out foggy. In fact the guides were worried about whether the fog would clear. As I mentioned before, sharing a narrow strait in zero visibility with huge cruise ships is at the top of every kayaker’s bad-idea list. The sun came out, however, and, beyond being caught in the death vortex, we had a great day of kayaking. The highlight, from my perspective, was visiting the site of the Orca-Lab.

A side view of the Orca-Lab and an out building. Tents were located behind these buildings, which I assumed housed some of the volunteers who come from all over the world to work at the research facility.

Some 150 orcas live and travel in Johnstone Strait and Blackfish Sound during the summer and fall months when the salmon are running. Orcas are quite social with the primary grouping built around the mother. She and her children stay together for life. Maternal groups form pods of extended family members and, beyond that, join together in clans, who more or less speak the same language: they share common calls.

Dr. Paul Spong established Orca-Lab on Hanson Island in 1970. It has been functioning ever since to study the local whale population. A number of hydrophones (underwater listening devices) are positioned around the Orcas’ territory to listen in on their ‘discussions.’ These sonic recordings are supplemented by visual sightings of orcas as they pass by Orca-Lab and from other land-based locations in Johnstone Strait. 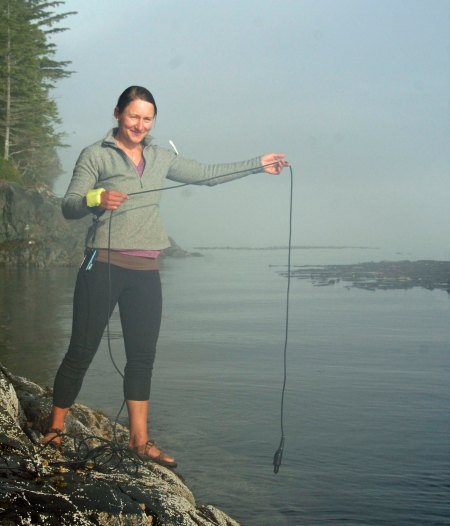 Julia drops a hydrophone into the water to see if we can pick up any orca calls. Is that a huge orca photo bombing the picture next to her waist??? Nope, it was a view of a peninsula modified by Julia’s shirt. I was excited for a second, though… (Photo by Peggy Mekemson.)

In addition to Orca-Lab’s ongoing scientific studies, it works to improve whale habitat, free captive whales, and oppose whale hunting. Number one on its “Free Willy” type campaign is Free Corky. She was captured when she was four years old and has now been in captivity for 42 years. You are more likely to know her as Shamu of Sea World in San Diego. Orca-Lab wants her reunited with her family. 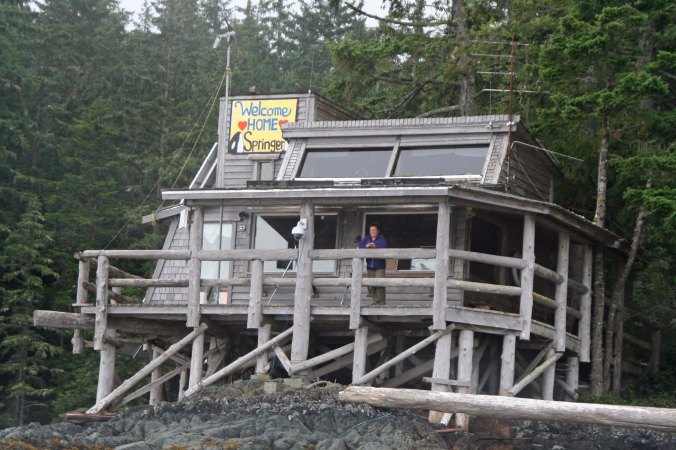 A frontal view of the Orca Lab with a Welcome Home Springer sign. Springer is the poster child of reuniting orca whales with their families. Orphaned as a child, she wandered far from home and began approaching fishing boats for companionship. Close to starving, she was captured, fed, and returned to her pod where family members adopted her— and taught her to stay away from fishing boats. Each year, she returns to Johnstone Strait. (Photo by Peggy Mekemson.) 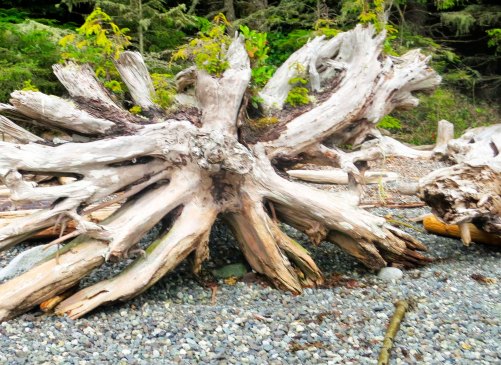 There was some very impressive driftwood on the beach at Orca-Lab, including this massive example. One might assume there were some large trees around…

We went for a walk and found this giant tree that the folks at Orca-Lab call Grandma Cedar. 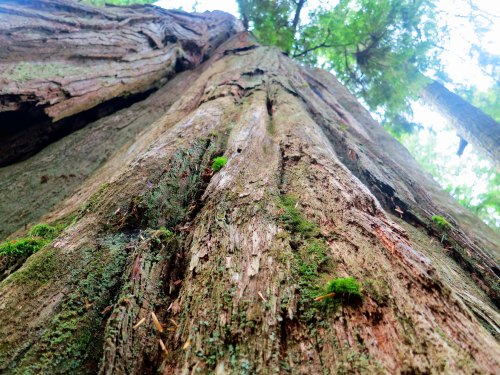 I took this photo of Grandma Cedar looking up.

Some photographers will go to any length to capture a photo of Grandma Cedar, as David demonstrates here.

On the way back to the beach, I found some strange mushrooms growing alongside the trail. On close inspection, I discovered they were carved out of wood. My thoughts: the folks at Orca-Lab were having a slow day.

Back at the beach I found smiling faces— Wendy and Dennis…

A stump with green hair. Could it be Treebeard of Hobbit fame… (Photo by Peggy Mekemson.)

This entwined piece of driftwood…

An interesting combination of old wood and rope… 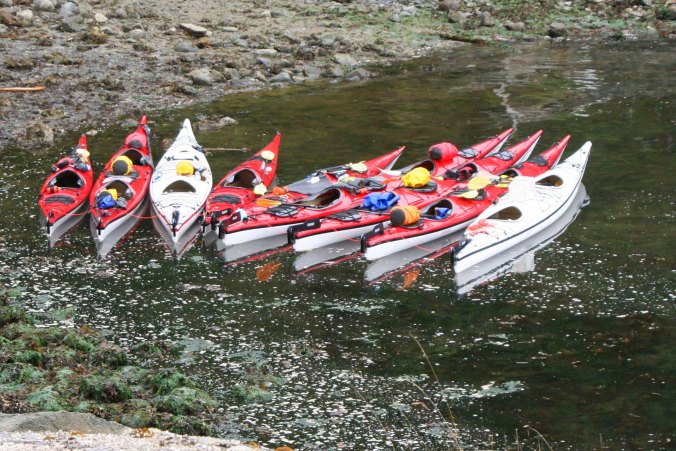 And our waiting kayaks. Our’s is third from the left. I was surprised she hadn’t escaped given that we had tried to dump her in the death vortex. It was time to saddle up and head for our last campground. Next Blog: I conclude the kayak adventure in British Columbia.