This beautiful pair of winged horses was found in a temple near the Etruscan tombs of Tarquinia. They are housed in the National Museum of Tarquinia. I immediately thought of Pegasus, the winged horse of Greek Mythology.

The Crown Princess sailed through the Tyrrhenian Sea into Rome’s port of Civitavecchia during the night. We had to make a decision; would we explore the region around the port or would we take the train into Rome.

Since we had flown into Rome at the beginning of our trip and already visited the major sites, Peggy and I, along with her brother John and wife Frances, decided to stay local. Our other two travelling companions, Kathi and Lee, opted for the hour train ride into Rome.

I had read in Rick Steve’s book on Mediterranean Ports about the Etruscan town of Tarquinia with its necropolis of 6000 tombs dating from 700-200 BC. I was eager to explore it. The Etruscans were precursors to the Romans… i.e. ancient. Also, in this age of movie vampires, werewolves and other creatures of the night, how could we resist visiting a city of the dead?

We scarfed down a quick breakfast onboard, grabbed the shuttle to town, and were soon knee-deep in cab drivers offering tours. Ninety euros bought the four of us a trip to the tombs and a visit to the National Museum of Tarquinia. Thirty minutes later we had made the short trip north of the port and were preparing to visit our first tomb.

Walking out to the site, we passed a number of large mushroom and hut shaped stone objects that had served as funerary urns for cremated bodies. Apparently these strange-looking urns, as well as more sophisticated sarcophagi (coffins), were found buried in the tombs.

These funerary urns found in Tarquinia were used for cremated remains and buried in tombs. The contrast of the green grass, dark clouds and bright sun made a colorful photo.

This type of funerary urn shaped like a house was apparently for the remains of a woman. The more ‘mushroom’ shaped urns were for men.

The tombs were dug into stone and covered by small mounds, creating what might best be described as a bumpy hill. A number of the burial sites contained elaborate paintings.  Small, modern buildings covered the stairs leading down into tombs. We switched on lights for our trip into the darkness. The tombs were sealed to protect the paintings. Miniature windows provided viewing for one person at a time. It was best to be first in line, rather than last and left alone with the dead… especially when the automatic lights shut off.

This photo shows one of the 2500 year old tomb mounds beside the small modern building that covers the stairs leading down into the tomb. 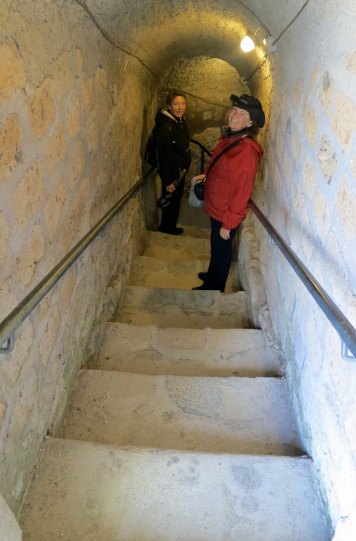 Peggy and Frances follow the stairs leading down into an Etruscan tomb.

The paintings provided a fascinating look into early Etruscan life. The Etruscans, it seems, believed that the soul remains with the body after death.  The dead were stuck in their tombs for a long, long time. Make that eternity. With this in mind, people did what they could to make the tombs pleasant places to live. Family and friends were painted on the walls, as were parties and dancing and music and feasts and sex. Who could ask for more? At least that’s what the living hoped. The dead were dangerous if they started wandering around outside. Best they have fun in their own little underground houses.

The following examples are from the Lioness House.

This photo is taken looking at the tomb of the Female Lions through the small window provided for visitors. Note the musicians, dancers, dolphins, lions and door to a second room.

A close up of the lioness. Hopefully, she has nursing cubs. I would call her a leopard because of her spots.

One of my favorite subjects in the tomb painting is the two dancers on the right. They seem to be having a great time. 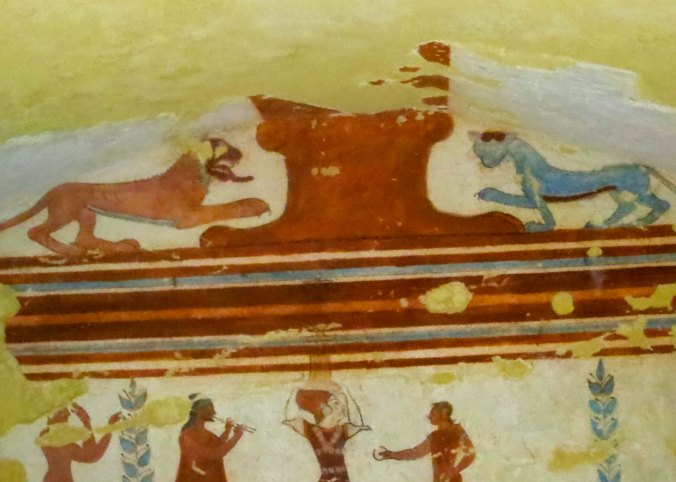 I found this painting from another tomb particularly amusing. It looked like the blue lion on the right is wearing shades; he is one cool cat.

Visiting the National Museum of Tarquinia finished off our tour. It is housed in a handsome building, the Palazzo Vitelleschi, which was begun in 1436 and completed around 1490.

The National Museum of Tarquinia is housed in the Palazzo Vitelleschi which was built between 1436-1490.

This Etruscan sarcophagus from the Tarquinian tombs was one of many at the National Museum. The person on top supposedly looked like the dead person inside. Also check out the winged guys on the side and the feet on the bottom. (Photo by Peggy Mekemson)

This pottery taken from an Etruscan Tomb was on display at the National Museum of Tarquinia.

Back on ship we were treated to a beautiful display of clouds highlighted by soaring seagulls.

NEXT BLOG: We begin our visit to Rome by walking along the Tiber River and stopping off at the Vatican.

9 thoughts on “The Tombs of Tarquinia: An Etruscan City of the Dead… Mediterranean Ports”