The flag that flew over Ft. Mifflin during the Revolutionary War. The Stars and Stripes had yet to be designed.

Every so often I like to repost this blog I did on America’s Revolutionary War. Since I have been writing about Revolutionary Boston and my laptop is off at the doctors, I thought I would return to Revolutionary Philadelphia today.

In the fall of 1777, 240 years ago, all that stood between the British and the likely defeat of the American Revolution was a small fort on the Delaware River. It is a chapter in American History that is little known and rarely told.

General Howe had overcome Washington’s troops at Brandywine and then occupied Philadelphia, sending America’s young government fleeing. An effort by Washington to counter-attack the British in early October and drive them out of the city failed. If the British Navy could resupply General Howe before winter set in, there was a very good chance he would catch the ever-illusive Washington and end the Revolution. There would be no United States of America.

A canon’s view across the tiny Ft. Mifflin focusing in on Canadian Geese. The mound was a bunker for storing munitions.

But Howe had a problem. The tiny Fort Mifflin with a circumference of 3600 feet and a contingent of 250 men was blocking the Navy’s 250 ships and 2000 troops from entering Philadelphia. It had been for six weeks. A concerted strike by British land batteries was initiated on November 10 and a massive bombardment by land and sea was planned for November 15.

The Fort, being blasted apart by the land batteries, did what little it could to prepare.  Under Washington’s orders, 286 fresh troops from Connecticut and 20 artillerymen from the Second Continental Artillery under Captain James Lees were slipped into the Fort on the 13th.  The night of the 14th was spent desperately making repairs to the shattered walls.

On the morning of fifteenth, five British Warships including the sixty-four-gun Flagship Somerset appeared out of the mist below the fort. Of equal, if not more concern, the British had taken advantage of a high flood tide and pulled the converted and armed East Indian merchant ship Vigilant and the gun-sloop Fury within pistol range of Mifflin’s northwest corner.

As the sun rose, the ships and land batteries opened fire in a bombardment that sent over 1000 cannonballs per hour crashing into the fort. It was the heaviest naval bombardment of the Revolutionary War.

Joseph Plumb Martin, a young private from Massachusetts, was there during the battle and captured the sheer terror of the experience some years later in his book Ordinary Courage. “They mowed us down like corn stalks,” he reported.

“I saw five artillerists belonging to one gun cut down by a single shot, and I saw men who were stooping to be protected by the works, but not stooping low enough, split like fish to be broiled.” 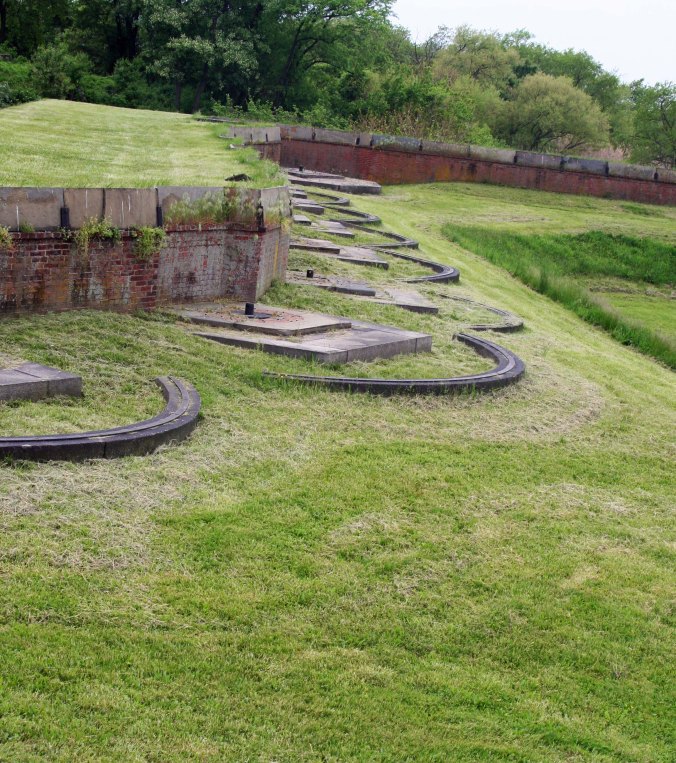 Gun emplacements along the walls at Ft. Mifflin.

While protection from the onslaught was nonexistent, one section of the fort was more exposed than any other according to Jeffery Dowart in his book, Fort Mifflin of Philadelphia, an Illustrated History. The northwest corner was directly under the guns of the Vigilant and Fury. Time and again these ships sent broadsides smashing into the ramparts manned by Captain Lees’ Company while British Marines posted in the masts of the ships fired down on the exposed artillerists.

“Every man who tried to serve the cannon on the battery’s angle was either killed or wounded,” Dowart reported.

At the height of the bombardment a decision was made to hoist a signal and request help from the galleys and floating batteries above the fort. A volunteer was requested to climb up the flagpole with the signal flag as the cannonballs hurtled in from all directions.

Joseph Plumb Martin had a vivid memory of the event. “…a sergeant of the artillery offered himself; he accordingly ascended to the round top and pulled down the (fort’s) flag to affix the signal flag to the halyard. The enemy, thinking we had struck (surrendered), ceased firing in every direction and cheered.”

“Up with the Flag!” was the cry from our officers in every part of the fort. The flag was accordingly hoisted and the firing was immediately renewed. The sergeant then came down and had not gone a half-rod from the foot of the staff when he was cut in two by a cannon-shot.”

Several galleys, floating batteries, and a frigate did come down river to aid the beleaguered fort but heavy fire from the British Warships drove them back.

At some point in early afternoon the fort ran out of ammunition and was totally at the mercy of the British guns. The end was only hours away. Under cover of darkness, the fort was evacuated. As the final group left around midnight, the flag was still flying.

Howe received his much-needed supplies in Philadelphia but time was running out. After two failed efforts at penning Washington down, he returned to Philadelphia while Washington moved on to Valley Forge for his winter encampment. Other battles would determine the future of the Revolution.

When I became involved in genealogy nine years ago, I discovered that my Great, Great, Great, Great, Great Grandfather, Andrew Mekemson had arrived in America from Ireland in the 1750s with six sons and one daughter. All six sons ended up fighting in the Revolutionary War. Four were involved in the battle over Fort Mifflin. My sixth cousin, Bill Makemson, shared a flyer researched and distributed by Fort Mifflin that presented a different perspective on the flag incident described by Joseph Plumb Martin. Following is a direct quote:

“During the siege and battle of Fort Mifflin, November 10-15, 1777, the flag was kept flying despite the British bombardment, one of the most stupendous in US History. Although at one point the British cannonballs were falling into the fort at the rate of 1,000 per hour, the American garrison heroically rose to the challenge and kept the flag flying. Two brothers from Pennsylvania, Sergeant Andrew Mackemson and Lieutenant James Mackemson, were both killed in re-raising the shot torn flag. The fort was finally evacuated by the remnants of the defenders, but was never surrendered to the British. The Fort Mifflin Flag was still flying at the end.”

Andrew and James were brothers of my Great, Great, Great, Great Grandfather Joseph Mekemson. They were both part of Captain Lees’ Second Continental Artillery Company that entered the fort on November 13. James was second in command. Andrew was the Sergeant of Joseph Martin’s memory. Both brothers would have also been involved in the devastating battle with the Vigilant and the Fury.

I am standing below the walls of Ft. Mifflin feet away from where the British ships Vigilant and Fury poured cannon fire onto the position defended by Andrew and James Mekemson.

Two other brothers, Thomas and William, joined the fight as well. Each served on the Floating Battery Putnam under Captain William Brown. The Putnam was one of the floating batteries to respond to Fort Mifflin’s signal for help.

Captain Brown had been appointed as the first Marine Captain in the Pennsylvania Navy and sent out to recruit more marines. He was in charge of the marines on the PA Navy’s Flagship Montgomery and then helped organize Washington’s crossing of the Delaware on Christmas Day 1776. He and his marines then went on to participate in the battles of Trenton and Princeton. It was the first joint marine/army operation in the nation’s history.

Documents from the Pennsylvania archives show that all four Mekemson or Makemson brothers (James, Andrew, Thomas and William) had joined Captain Brown by the time of Washington’s battle at Trenton and night march to Princeton. They may have been with him even earlier at the Delaware crossing. By September the brothers had split with James and Andrew moving on to their destiny with Captain Lees and Fort Mifflin. 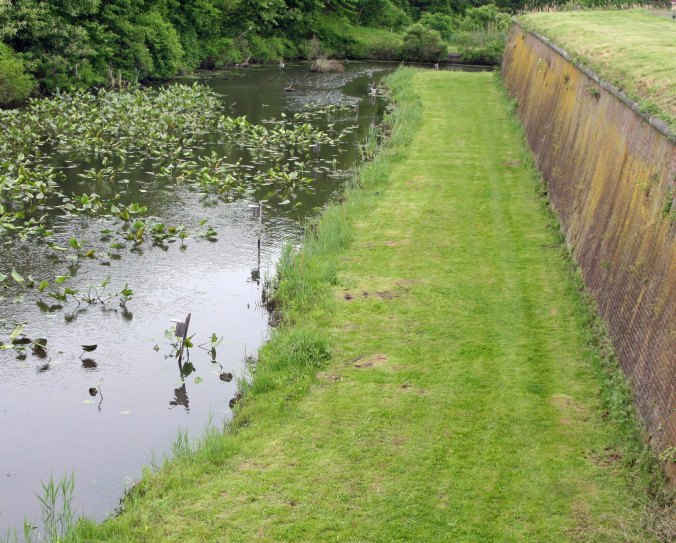 Today, a beautiful moat filled with plants and wildlife surrounds Ft. Mifflin. I like to think of it as a fitting memorial to James, Andrew and the other men who fought so bravely against overwhelming odds and gave their lives so the young republic could live.

52 thoughts on “Fort Mifflin: A Tale of Death, Heroism and a Flag…”