Our sea kayaks wait patiently for us as we have lunch in a cove off of Johnstone Strait.

This is the first of my series of ‘oldies’ I am reposting from my archives to give new followers a taste of what they can expect to find on my blog. Peggy  and I made a trip to Vancouver Island, British Columbia in 2014 to go kayaking among the orca whales. The next post in the series can be found here:  https://wandering-through-time-and-place.com/2014/10/30/

I was nervous as we drove into the town of Port McNeill on the northeast shore of Vancouver Island in August. Peggy and I had signed up for a six-day sea kayak tour out of Telegraph Cove with Sea Kayak Adventures.We would be searching for orcas, which are also known as killer whales—as our son Tony, the Alaska Coast Guard pilot, reminded us. A little Jaws music, perhaps?

This orca skeleton was on display at the Whale Interpretive Center in Telegraph Grove. I named him Smiley and addressed him as sir.

“Okay, Curt, what have you gotten yourself into this time?” was bouncing around in my skull like a kangaroo on steroids. It’s a question I ask myself often.

I wasn’t nervous about the whales, however. I’ve spent my life communing with nature. Besides, these particular giants are gentle, relatively speaking; they get fat off the salmon in Johnstone Strait. They don’t need to eat people. But sea kayaking would be a first for me. The old dog had to learn new tricks, and that is always a reason to get excitable. Fortunately, Peggy and I had played around a fair amount with inflatable kayaks. We had even ventured out on challenging multi-day lake trips into remote areas such as Prince Albert National Park in Saskatchewan and Voyageurs National Park in Minnesota. So how hard could it be?

Aren’t I pretty? No? Maybe I wasn’t meant to wear a skirt. This skirt is designed to fit snugly over the cockpit of the kayak and keep out the water.  It’s so snug that you really have to stretch it to fit, which isn’t easy— particularly around the back. My skirt and I had several discussions while I was learning how to make it behave. It learned new words. Ask Peggy. (Photo by Peggy Mekemson.)

I confess I was more nervous about the idea of being on a tour. I am not much of a tour group person. This is a strange statement coming from someone who spent over a quarter of a century leading backpacking and bicycle fundraising treks for the American Lung Association. But the truth is— I am an independent cuss. I like to go where I want to go and stop when I want to stop. On an organized tour, I would be expected, even required, to adhere to the group schedule and itinerary. This isn’t a complaint. It has to be that way on group outings. Common sense and liability demand it.

And then there were the people. We’d be living closely with these folks for six days under potentially trying conditions. What would our guides be like? How about our fellow tour group members? Would we get along well? Would they be strange— even stranger than I am?

“Could I interest you in a cracker?” The tour promo promised good food, but it failed to mention the presentation. This is Nick from New Brunswick, one of our three group leaders. Note the sprig artfully shoved into the cheese.

Quy, another of our guides, is a gentle soul who in his other life works as a computer geek in Vancouver. So what is he doing with this knife? 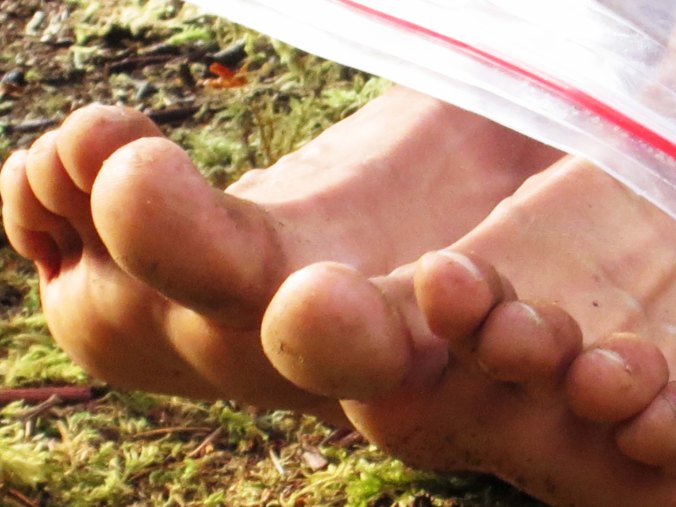 Julia, our third guide and assigned trip leader, hails from Germany and is quite charming. She may use Quy’s knife on me for this photo of her toes, but I couldn’t help myself. And no, I don’t have a foot fetish. My fascination with her toes was that they could run over anything, including  rocks. The last time I had feet that tough, I was ten years old. 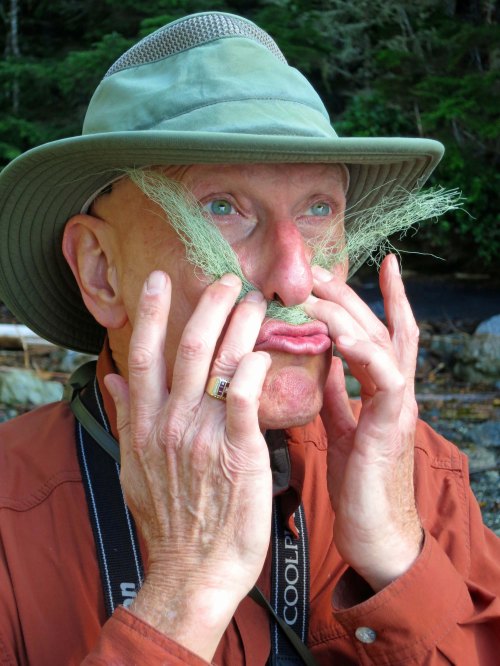 And how about our fellow travelers? David is a psychologist out of LA. How much stranger can you get than creating this mustache? Well maybe someone who kisses fish…

“But he was so beautiful,” Lindy told me. He was dinner, Lindy. Dinner.

Regardless of how nervous I felt, the trip was simply too much of an opportunity to pass up. Like how could I not go on a sea kayaking adventure out among the orcas in beautiful British Columbia? As for Peggy, she is always up for adventure. When our friends Edie and David from Anchorage, Alaska called and asked if we would be interested in going, we gave a resounding yes. It turned out to be great decision. The guides, our fellow tour group members, and the incredible views were delightful. Even the orcas cooperated.

Today marks the beginning of my series on the trip. I’ll start by exploring the quaint town of Port McNeill. In my next post, we will climb in our kayaks and push-off from Telegraph Cove. The orcas are waiting. Let the adventure begin.

While the main source of employment for the people of Port McNeill is the timber industry, the town also has a charming harbor. Note the yacht in the background. It had its own helicopter.

In case anyone was wondering. I loved this guy’s sense of humor.

Peggy, David and Edie pose in front of a dolphin statue that faces the harbor. Edie went to high school with Peggy in Ohio and runs a tax accounting firm in Anchorage. David is an Alaskan bush pilot who works on the North Slope, and is a published poet.

You are looking at Port McNeill’s pride and joy: the worlds largest burl. Can you imagine this thing growing on a tree? (Photo by Peggy Mekemson.) 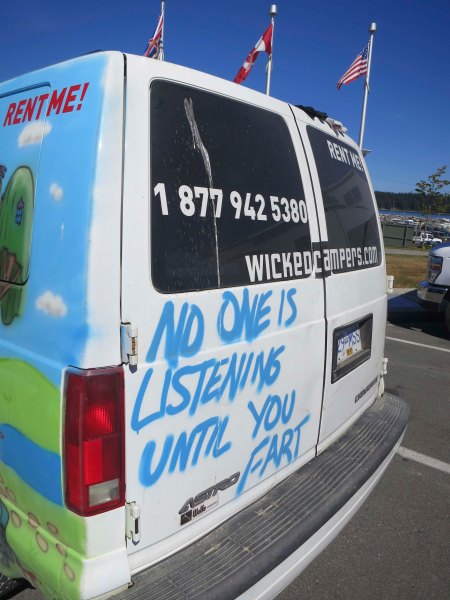 Tourism is also an important industry for Port McNeill. Wicked Campers caught my attention. The company provides inexpensive travel vans and its raucous brand of  advertising in a number of countries. 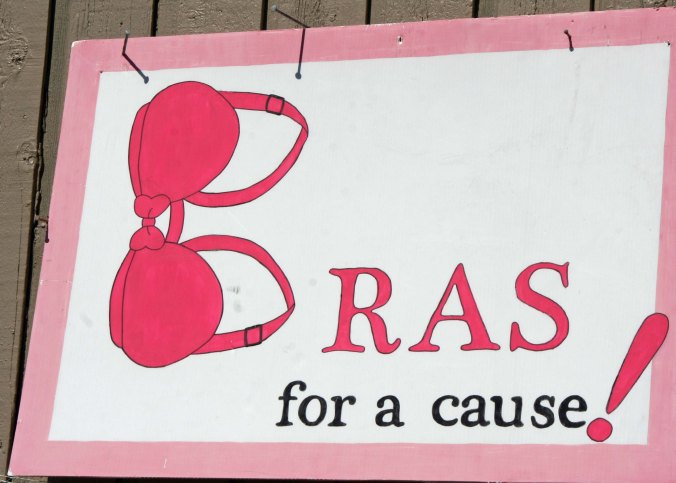 We were also amused by Port McNeill’s unique way of fund-raising where bras are decorated and then auctioned off. Which of the following three would you choose? 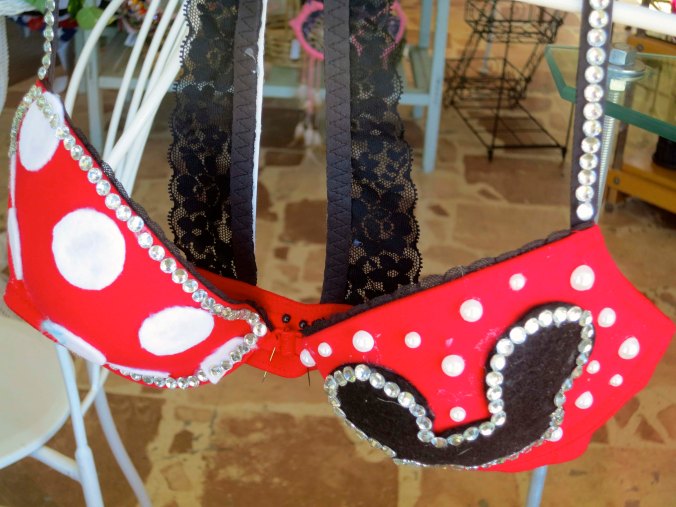 Given the ears, I am thinking Minnie Mouse was the inspiration. 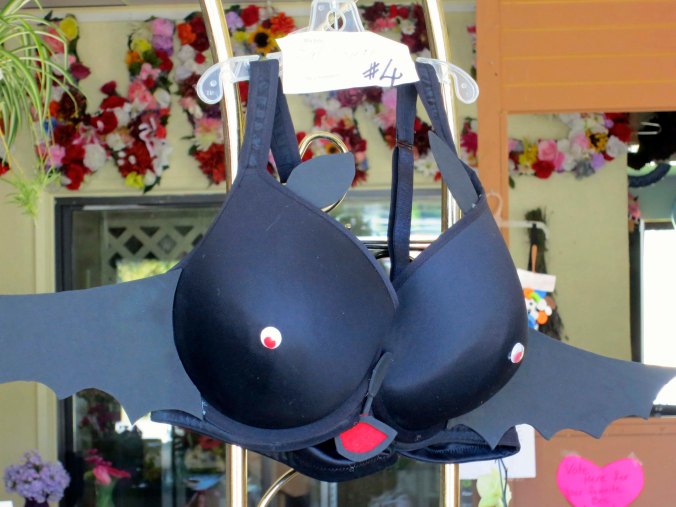 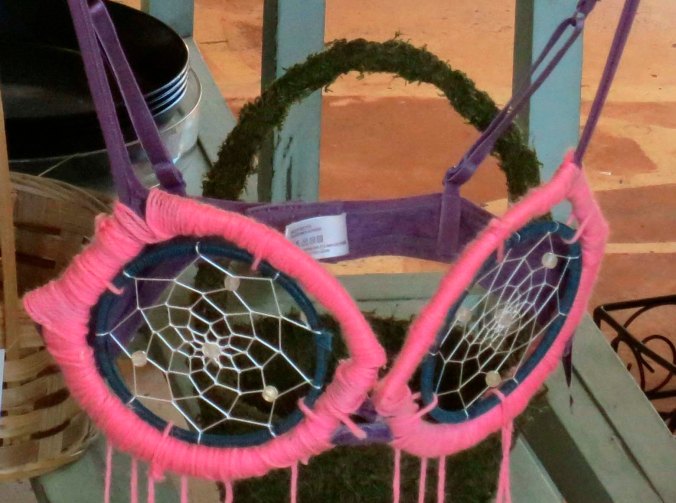 Dream catcher? Ouch. This one would leave an impression. 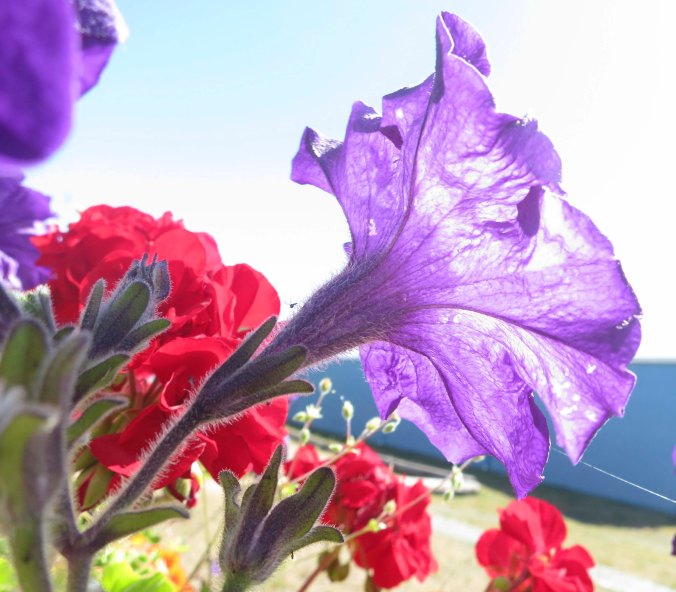 The flower shop that featured the bras was closed so I couldn’t get inside to photo more of the entries. I did capture this petunia on the outside, however.

Mist in the trees. A final photo to whet your appetite. Let the adventure begin.