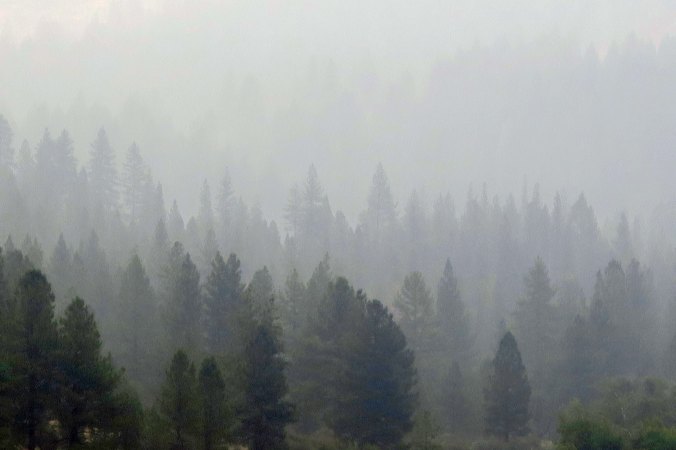 Smoke from the Carr fire out of Redding plus smoke from a nearby Susanville fire impact the PCT near Chester, California

Up until now, I’ve been lucky in avoiding fires on my hike down the PCT to Mt. Whitney from Southern Oregon. Certainly this was true of Section P that I have been featuring in my last few posts. Jay and I had a couple of days of minor smoke from fires near the Oregon border, but as my photos have shown, most of our trip was either beautifully clear or only slightly hazy. My luck continued all the way through Lassen National Park to Highway 36 and Chester (close to half of my trip). The Carr fire near Redding and several other Northern California fires have changed that.

It seems like the whole West is burning, a phenomenon that has become all too common. And it’s no stranger to those who hike the Pacific Crest Trail. Tinder dry forests, excessive heat, low humidity, strong winds, lightning, and people careless with fire are all factors. A small blaze can quickly escalate into a conflagration that consumes hundreds and even thousands of acres.  Through-hikers and section-hikers pay close attention to the latest news. First, because of potential danger. Pushed by strong winds, forest fires can move quickly and threaten life. Second, and much more common, fires force trail closures. Dreams of hiking the whole trail straight through are often frustrated. Global warming is taking its toll on the PCT! 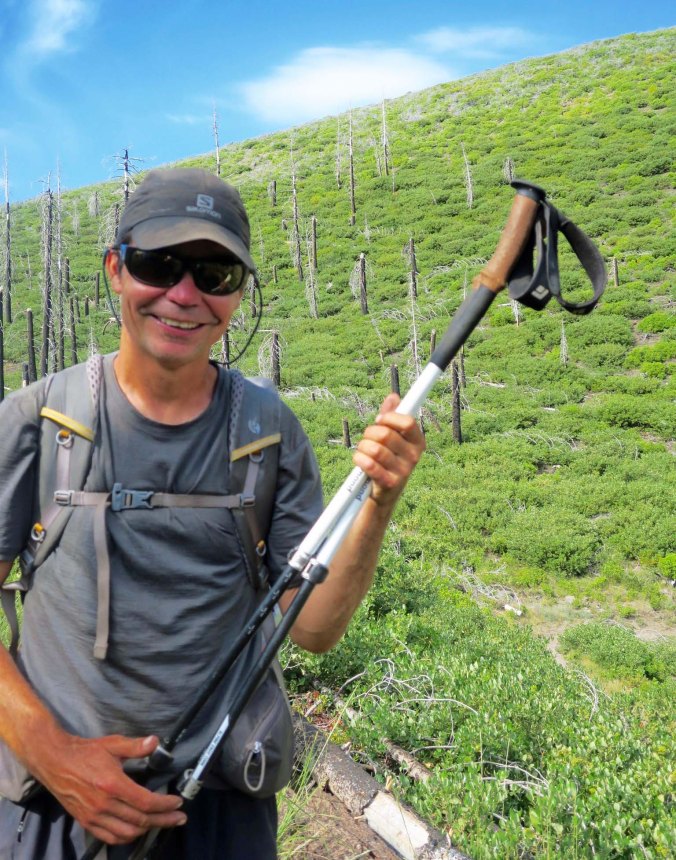 I met “Steady” from the Netherlands when I was hiking into Lassen National Park. “My trail name is Steady,” he told me, “because I am slow but steady on the trail.” He immediately wanted to know about fire closures along the PCT. Like so many through hikers, he dreamed of making the whole trail without any interruptions. The dead trees in the background are the result of a past fire.

Smoke is also an issue. Visibility drops quickly. Distant vistas that the PCT is famous for and that trekkers love disappear. Of even more concern, air pollution becomes a health threat. The fine particulate matter created by smoke can make its way deep into your lungs. As the American Lung Association notes: Wildfire smoke can be extremely harmful to the lungs, especially for children, older adults (which I vaguely resemble at 75) and those with asthma, COPD and bronchitis or a chronic heart disease or diabetes. Unhealthy air from the Ferguson Fire was a major reason for evacuating Yosemite Valley this summer.

During heavy smoke episodes, people are warned to stay inside and avoid exercising outdoors. The harder a person breathes, the deeper smoke is pulled into his or her lungs. As you might imagine, staying inside and avoiding exercise are not options for people out on the PCT. In fact, through-hikers are exercising way beyond what is normal, especially when hiking up a steep trail or backpacking 20-30 miles a day. (I’ll add my 13-15 miles a day here— grin)

Many of you have expressed concern over how the numerous fires in Southern Oregon and Northern California are impacting my journey. The Carr fire that has garnered so much national media attention, is a case in point. As of this morning the fire has consumed 89,000 acres and is threatening Redding. It has even created its own weather system, including fire tornadoes. Fortunately for me and others hiking the PCT, it is about 50 miles west of the trail. We don’t have to worry about the flames, at least not yet. Hopefully, the fire will be contained by the time you read this post.

Avoiding the Carr fire hardly puts through-hikers in the clear. Numerous other mountain fires rage in California and Oregon. We came across this sign just a few miles outside of Chester on our way to Susanville. It is a sign of the times.

The smoke from the Carr fire was something else.

When Peggy drove me over to the trailhead on Highway 36 yesterday morning (July 28) for the next segment of my trip, the smoke was so thick that visibility was severely reduced. Smoke from the Carr fire to the west had been joined by smoke from the Susanville fire, about 30 miles to the east. With a 2600 foot climb ahead of me in temperatures likely to climb into the 90s F and possibly low 100s (32-37 C), I was not a happy camper. I would be working hard, hot, and breathing smoke. So, I decided that there was another solution: Give the smoke 2-3 three days to clear out a bit or pick up the trail farther south. While most through-trekkers prefer to hike straight through, nature often has other plans. High snow in the Sierra’s, for example, often forces people to skip that section and hike it later. (I had already skipped one section of the trail where 100 degree plus F heat combined with no water for 30 miles.)

The early morning sun in Chester had been turned red-orange by smoke from the fires.

I can always come back and do the trail or make up the distance in a less smoke-choked area, if one exists in California or Oregon or Washington. My goals are to enjoy the wilderness and its beauty, hike a thousand miles, and follow the PCT as much as is possible, hopefully ending with Mt. Whitney. But beyond enjoying the wilderness, there is a lot of flexibility in my plans. My trail of choice for the moment is to follow the PCT from Carson Pass on Highway 88 to Sonora Pass on Highway 108 and then do the section just north, hiking from Donner Summit to Carson Pass.

But enough seriousness, now it’s time for some fun— brought to you courtesy of my being off the trail for a couple more days. In addition to beautiful scenery and wood sculptures, the trail from Etna Summit to Castle Crags was filled with flowers, some interesting characters, colorful rocks, a seemingly tame frog, pitcher plants, and a very colorful caterpillar. Here are some photos. Enjoy.

This happy fellow who had its own spring seemed to pose for us. It was used to being admired by through-hikers.

And this fat caterpillar was not about to stop its consumption of a leaf because of our attention. 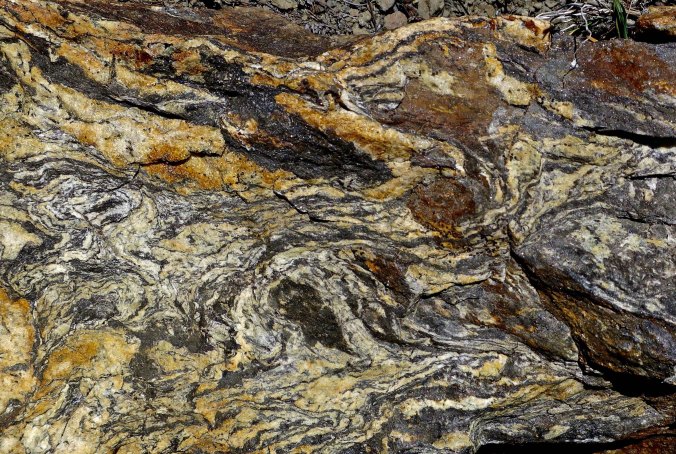 Have you ever seen a rock like this? I could only wonder about its mineral composition and the forces of nature that had created it.

This woman, whose trail name was Mama Bear, had been traveling with her cubs since Mt. Whitney, a distance of several hundred miles.

Wendy and Tim were doing an excellent job of representing Australia. They were hiking down the PCT and hoped to hike across America. Tim, who hailed from Sydney, had previously hiked from the southernmost point in Australia to the northernmost point, raising money for suicide prevention. Wendy hailed from Queensland. 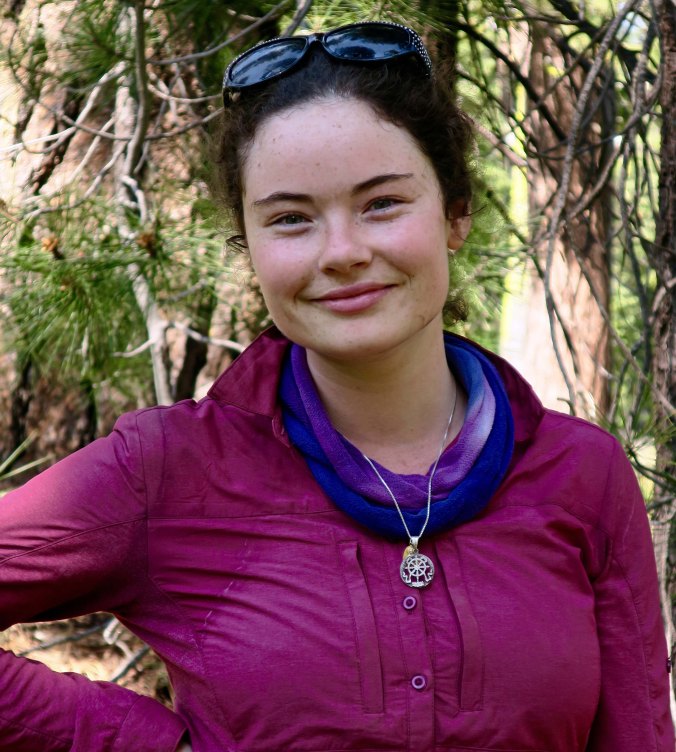 We met Rowan later. She was also from Australia and was hiking in memory of her twin brother who had died. Another brother was also hiking with her. Rowan works as an actress in Sydney.

A beautiful small stream where we met Rowan, made an excellent camp site for Jay and me.

Shooting down into the water, I caught this photo.

PCT trail signs come in many flavors depending on the particular national forest, wilderness, park, etc. I liked the sentiment that someone had expressed on this one. 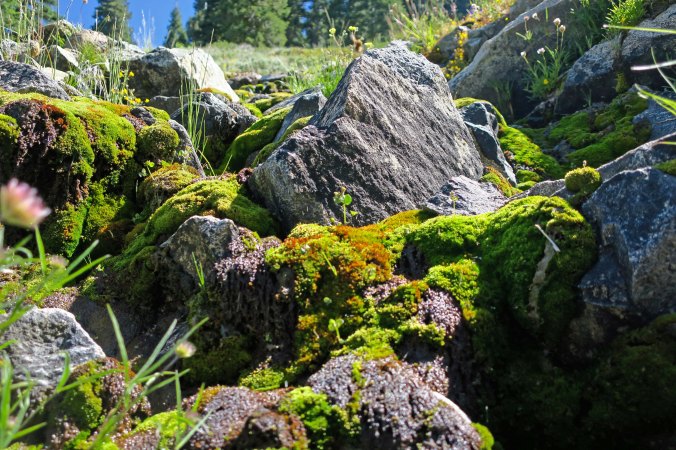 It seemed to go along with this Zen-like garden a spring had created. 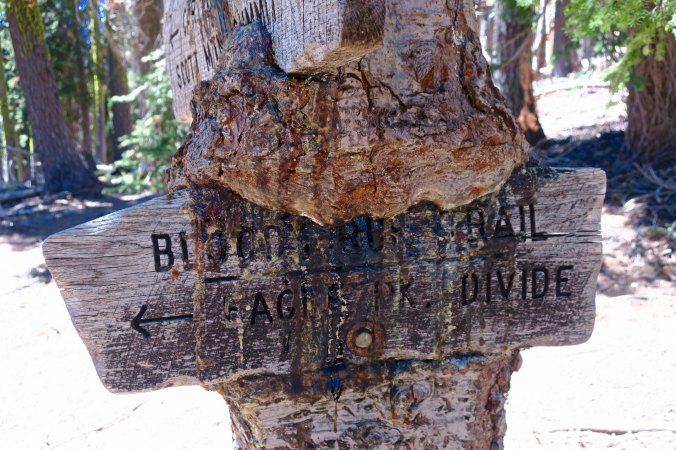 There is nothing calming about this sign. It’s for Bloody Run Trail. Given how the tree is consuming the sign, I thought of running myself.

Also in the slightly weird category are these pitcher plants we found where the frog was hanging out. These guys, a young one and an old one, are carnivorous plants that eat insects, which are trapped inside the ‘pitcher.’ Another name for this plant is the cobra plant, given the shape of the plant and its ‘forked tongue.’

This unusual flower went with the pitcher plant.

There was no lack of ‘old friends’ when it came to flowers along the trail. Yellow lupine decorated this one.

A close-up of the Lupine.

Recognize this little beauty? It is a wild hollyhock.

I caught this cow parsnip backlit by the sun, but I had to sit on wet ground to do it.

A morning-glory if I am not wrong. Strange leaves, it seemed to me.

A shooting star flower. Hundreds grow in our backyard. 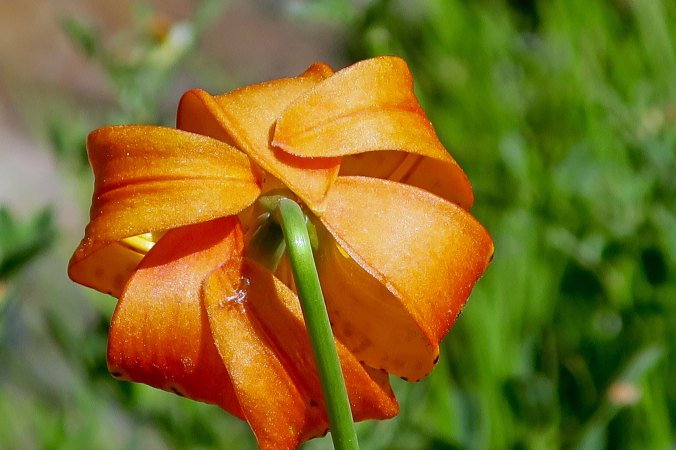 The back side of this tiger lily was quite attractive… 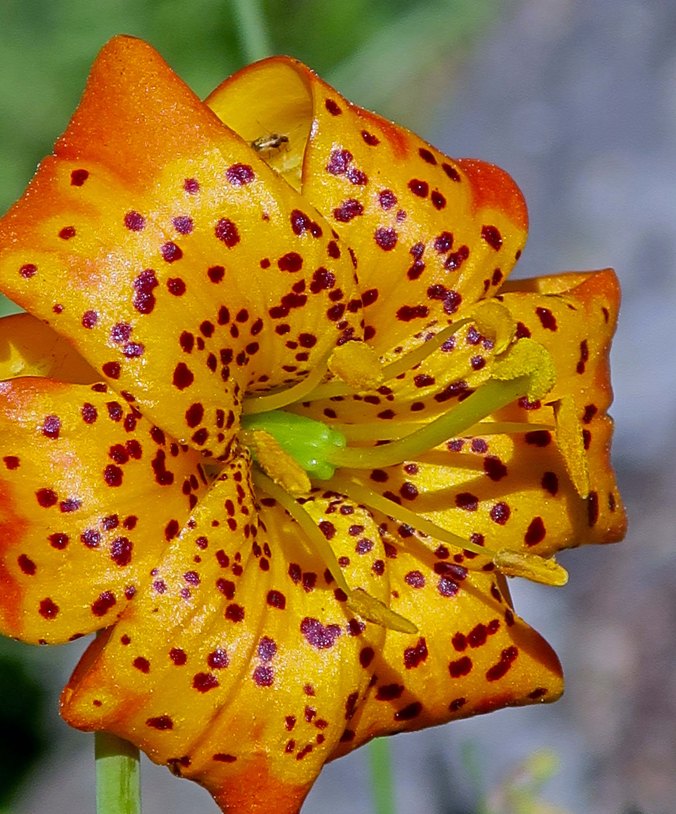 But not as pretty as the front.

I took this photo of Jay as we were hiking down into the Castle Crags Wilderness. No smoke here!

Around the time I took the photo of Jay, we ran into Bill Whitaker. Bill had started his hike at Castle Crags and done a little over 10 miles in two days. He was planning to hike on to the Washington/Oregon border, a long ways at that pace! He was 68 years old. 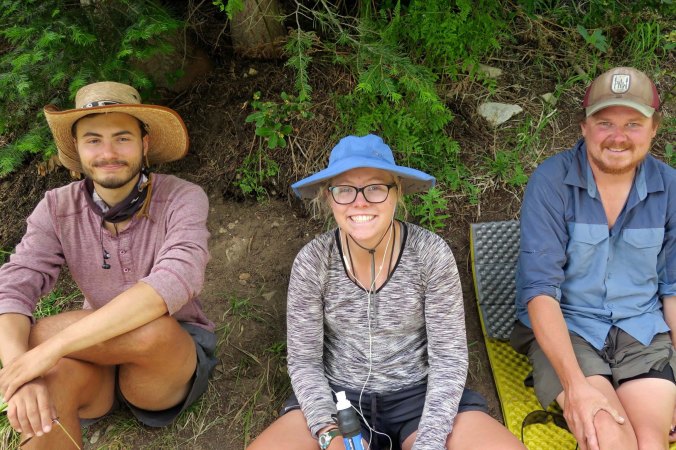 We also ran into Bilbo, Ducky and Shoe. Their approach to the trail was to take a couple of hours off everyday at lunch, which was a quite civilized approach to the PCT. Bilbo was from German, Ducky from Utah, and Shoe from Canada, representing the international nature of those who hike the trail. 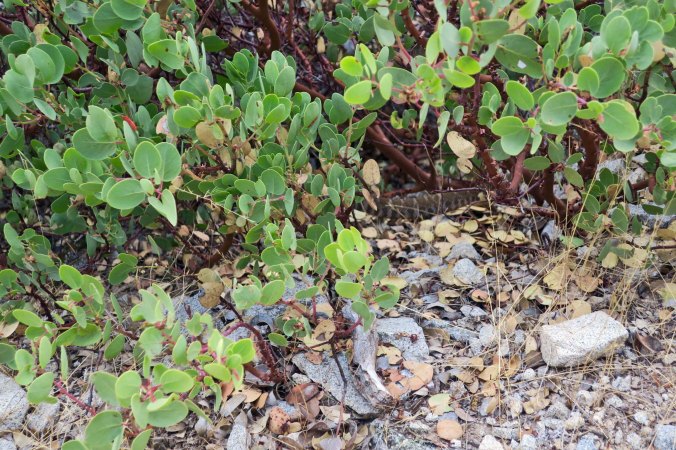 “Watch out for rattlesnakes,” a through trekker told us. Jay, who was in the lead, didn’t have to be told twice. In fact he found two. Neither seemed to be interested in a photo-op and disappeared into the brush even though I invited them to come out. Can you find the rattler here?

Jay and I at the end of the trail where Peggy was waiting for us. (Photo by Peggy Mekemson.)

I’ll conclude with this photo of ‘Aunt’ Peggy and Jay at Railroad Resort RV Park beneath the Crags.

Next up: Peggy’s photos of Etna and Dunsmuir, two small towns that through-hikers visit on their way through Northern California.