A view of the Rogue River from our camp on Quail Creek.

Today marks the second of my three-part series on hiking down the Rogue River Trail. It’s a beautiful 40-mile hike, best done in the spring or the fall. Peggy and I made a leisurely six-day backpack trip out of it, both to enjoy the beauty and to condition our bodies for our summer of backpacking where I will be hiking 1000 miles from Mt. Ashland to Mt. Whitney. Peggy will be joining me for parts of it plus doing back-up, a true trail angel!

Dark skies were suggesting rain when we rolled out of our tent at six. ‘Rolling out’ is a good description. My sore muscles and creaky joints were complaining about our first two days of hiking down the Rogue River Trail. They refused to cheerfully jump up; they threatened to go on strike. I told them to behave or I would double the number of miles they had to travel and cut off their Ibuprofen. They whimpered— but the Ibuprofen got their attention.

I have yet to tell them that they are going on a thousand-mile backpack trip this summer. And I may not, at least until the first 500 miles are over.

Things began to morph. My down pillow of the night before became my down jacket. My Thermarest air mattress changed into a comfy breakfast chair. Fifty years of backpacking have taught me that anything that can serve multiple purposes is a good thing. Routine is also good. I had packed my sleeping bag, clothes and personal items before leaving the tent. Now they were waiting to be packed into my backpack. Right after I put my chair together, I went to gather our food.

It was dutifully waiting in the middle of the ranger-built, electric fence enclosure. No bears had made a feast of it. Either they hadn’t been by to visit or they truly don’t like being zapped. I suspect that a tender nose coming in contact with a live wire is not a pleasant experience. If I were a bear, I’d skedaddle out of there on all fours and look for a ranger to eat.

Breakfast was next; I’m the camp cook. My job description is to boil up two 32 ounce pots of water per day, one for breakfast and one for dinner. Takes about five minutes each. Peggy arrived from doing her chores about the time the pot began to boil. We sifted through our food bags and pulled out instant oatmeal, breakfast bars, Starbuck’s instant coffee, and dried apricots. The latter are to help keep us digging cat holes. “Meow.” Or maybe I should say, “Purr.’” Being regular out on the trail is important.

The literature had promised an outhouse at Horseshoe Bend, but it had been decommissioned, i.e. filled up. The same is happening with the other ‘bathrooms’ that the trail maps promote along the river. Be prepared. Rafters are expected to carry their own port-a-pots. Backpackers are left with digging cat holes. We are used to it. Watch out for the poison oak. (grin)

With breakfast over, we took down the tent and packed up. A few drops of rain encouraged us to put on our rain jackets and pack covers. It promised to be a cool day, which was welcome after the heat of the first two days.

The trail continued its ups and downs, starting with the very steep up we had hiked down the evening before. At times our route dropped almost to the river. The closer we got, the thicker the poison oak and blackberries grew.  Peggy and I stopped and laughed at one point. The blackberries were occupying a third of the trail and the poison oak the other, leaving only a few inches for passage. It was like the plants had an agreement to drive you toward one or the other. We chose the blackberries on the theory that it is much better to suffer a few scratches than be covered in an itchy rash.

We also crossed several recent slide areas where the trail was minimal, about a shoe wide. Careful attention was called for and looking down not recommended. On one slide area, a tree trunk was stretched across the trail, forcing us to balance precariously while climbing over. It was not for the faint-hearted, or for people with a fear of heights.

Beyond that the trail was quite pleasant; passing through woodlands, providing dramatic views of the river, and crossing over brooks and streams on attractive bridges. Once again, cheerful flowers kept us company.

We found that the bridges along the trail were well built and fit in with the environment. This is Meadow Creek Bridge. 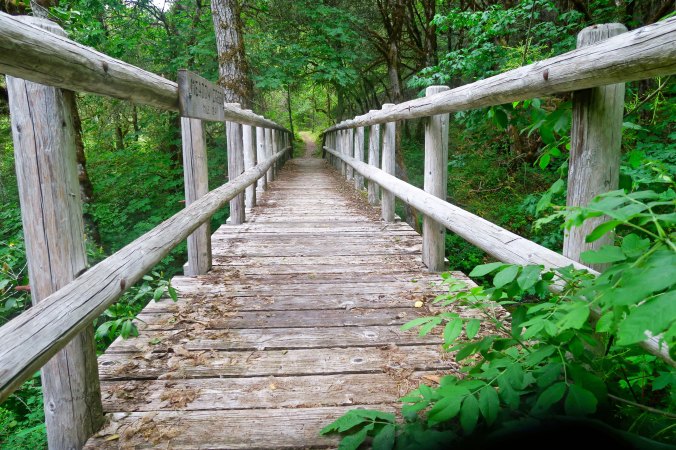 Another view of the Meadow Creek bridge.

Peggy on the Kelsey Creek bridge looking down at the water. A rain cover is on her backpack. It never did rain.

Our views of the river ranged from raging rapids… 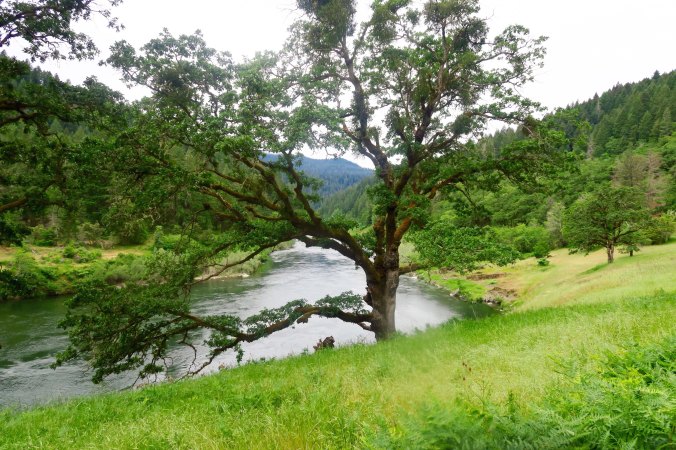 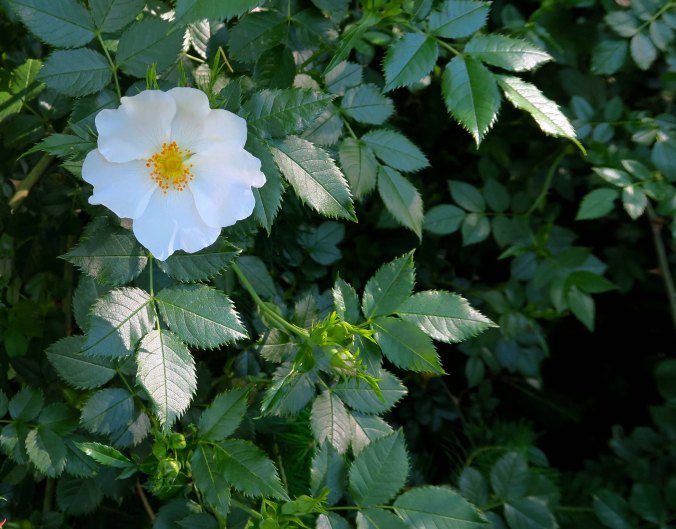 A number of flowers were found beside the trail, including this wild rose… 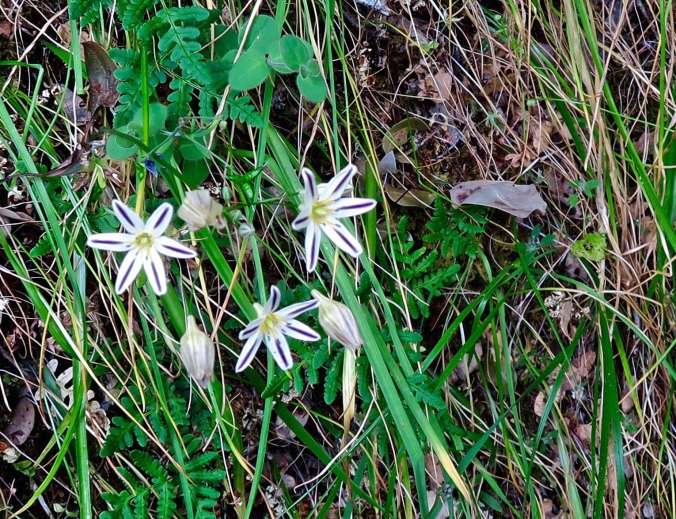 A snack at Ditch Creek provided this view of several small waterfalls tumbling down the hill. Zane Grey’s cabin was a mile or so down the trail.

We missed Zane Grey’s cabin. The trail to it wasn’t marked and we weren’t paying attention to our map. Too bad. I had been an avid fan of his cowboy books during the Western phase of my youth. Such classics as Riders of the Purple Sage had kept me glued to my seat as good triumphed over evil in the Old West of six-gun justice. Grey had used the cabin as a fishing lodge in the 1920s. He even wrote a book about the area, Rogue River Feud.

Our campsite that night on Quail Creek made up for missing the cabin. Located on the edge of the Rogue River, it provided the striking view that is featured in the photo at the beginning of this post. Geese, buzzards, rafters and lizards provided entertainment. The buzzards seemed to be following us. “Maybe they think we are old,” I suggested to Peggy, which elicited a snort. The lizards were just curious, checking out all of our gear and climbing up on convenient rocks to watch us. 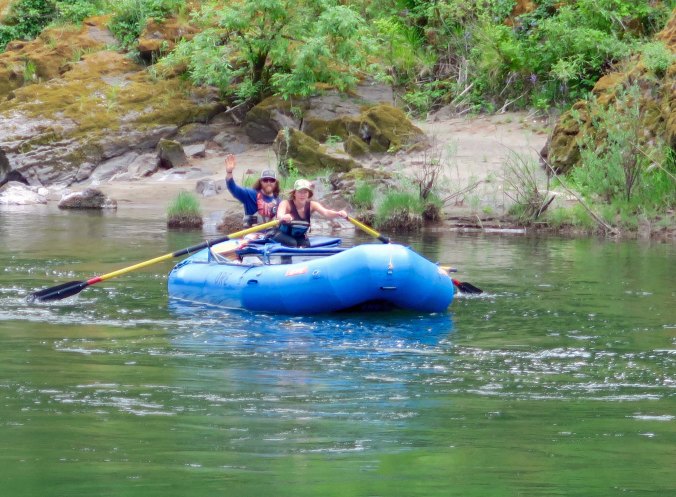 Rafters waved at us from the Rogue as they passed our camp on Quail Creek. 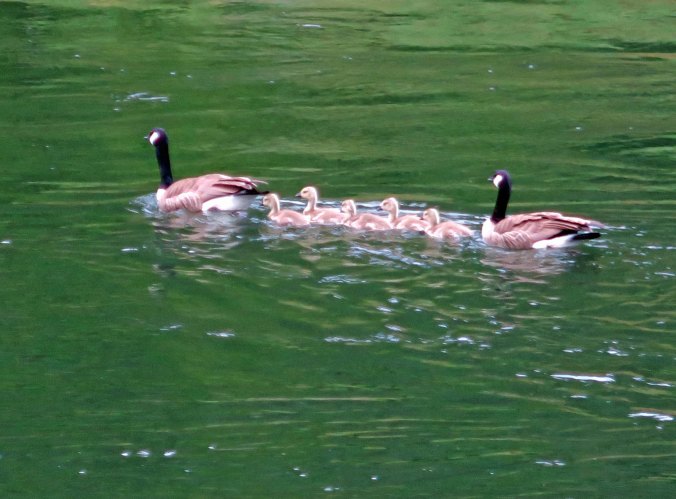 And a pair of Canadian Geese kept their offspring in a careful line.

The morning part of our hike the next day took us in to the Rogue River Ranch, which is a gem. Now on the National Register of Historic Places and operated by the Bureau of Land Management, the ranch was established in the early 1900s by George and Sarah Billings, becoming a lodge for travelers, the post office, and a social center for a small but growing community. In 1927, Billings sold the house to Stanley Anderson, the builder and owner of the Beverly Hills Hotel in Los Angeles. The Andersons upgraded the property and used it to entertain their friends from Los Angeles and Hollywood up until 1970, when they sold it to the BLM.

An old barn on the Rogue River Ranch. One of the volunteer caretakers, Sally, can be seen raking up grass the old fashioned way. It went with the barn. 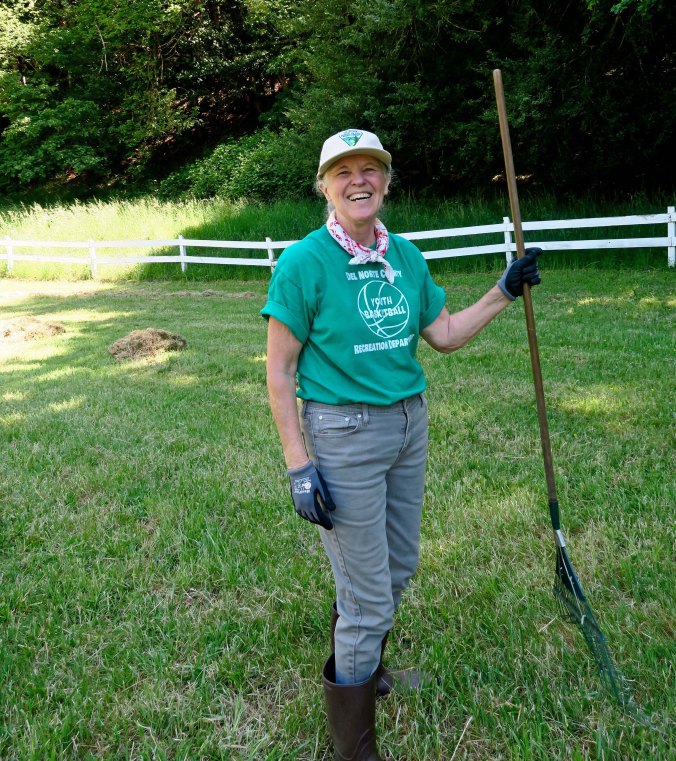 A close up of Sally. 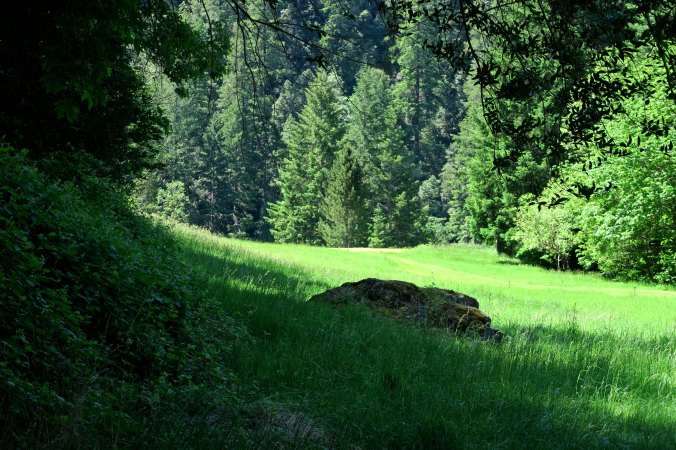 Looking toward the river from the ranch.

Sally and Frank, the volunteer caretakers for the ranch, took a break from raking up grass and gave us an overview of its history. Peggy and I then visited the main house that had been turned into a museum. I was amused to find this description of the one room upstairs lodge provided by an early visitor:

When the place was full at night, it was a nightmare. There was almost continuous coughing, snoring, grinding of teeth, urinating in a can or out the window, and other night noises. There always seemed to be someone walking around the room or to the window or stairways, which shook the floor and building. Sound sleep for any length of time was impossible.

Not quite as fancy as the modern lodges that are found along the river today. But then again, three meals and a bed for the night could be had for a dollar, a far cry from the $150 plus per person charged today by the resorts.

A view of the main house at Rogue River Ranch. A single large room upstairs provided lodging for early travelers.

The ‘Tabernacle’ is located behind the house. This building served as a barn for horses and mules on the first floor and a meeting hall, dance floor, and church on the second floor. Today the building houses a number of artifacts. 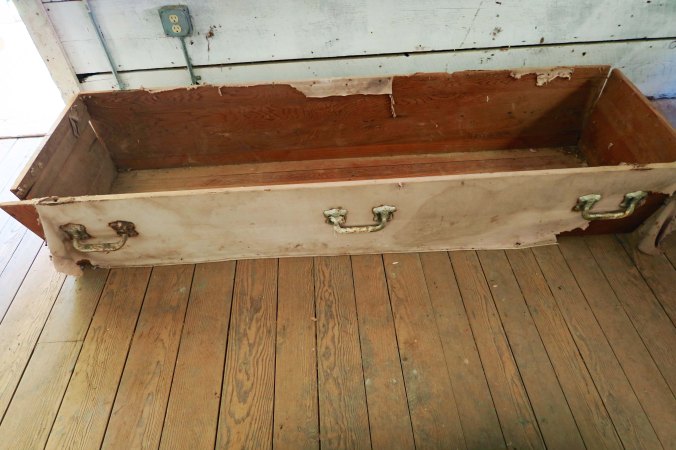 Such as this old coffin… 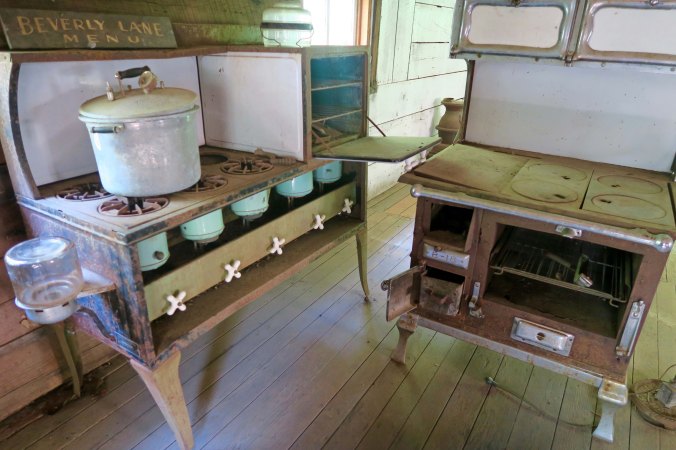 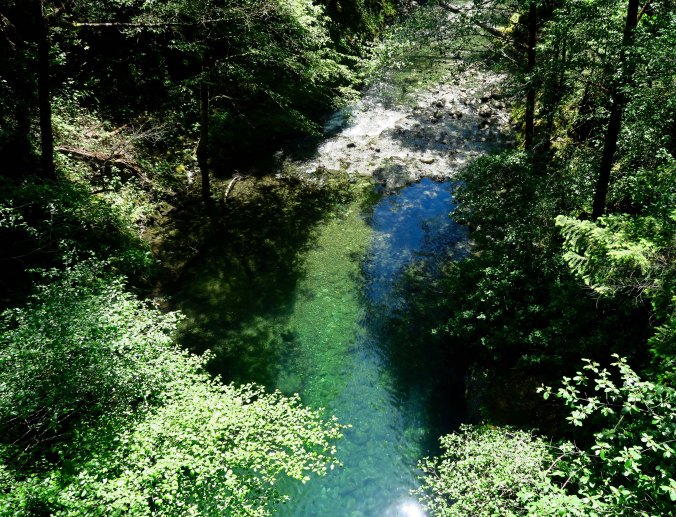 I’ll close today with a view of Mule Creek, which flows beside the Rogue River Ranch. The creek was named after a mule named John who wandered off and became lost. The story has a happy ending. Several years later his owner found him. I assume they lived happily ever after.

FRIDAY’S POST: What does a skunk have to do with my first date in high school. The MisAdventure series.