Sunset at Zoroaster Campsite on the Colorado River in the Grand Canyon. (Photo by Don Green.)

Having left Tanner Rapids and my encounter with Mousy at mile 69, we continued on down the Colorado River to Zoroaster Camp at Mile 84.5. The dark inner walls of the Canyon signified we had traveled back a billion years in geological time, back to the very beginnings of life on earth. A rousing game of Bocce Ball served as entertainment in camp that evening.

Whose ball is closest? A game of Bocce Ball entertained our rafters…

And I took care of my groover duty, which is far from being groovy and gives a whole new meaning to port-a-pot. (Photo by Don Green.)

Tom’s objective in camping at Zoroaster had been to put us close to Phantom Ranch, which was located at Mile 88 on our 18-day, 280-mile trip down the Colorado. Built in the 1920s, the facility provides the only lodging beneath the rim in the Grand Canyon. There are three ways to get there: on foot, by mule or by raft. I’d backpacked down twice, once from the North Rim of the Canyon and once from the South. Now I would visit by raft. The Ranch also provides one of the few opportunities along the river for rafters to leave and join trips. Nancy Pape would be leaving and Jonas Minton joining us. I’d known both since the 70s. 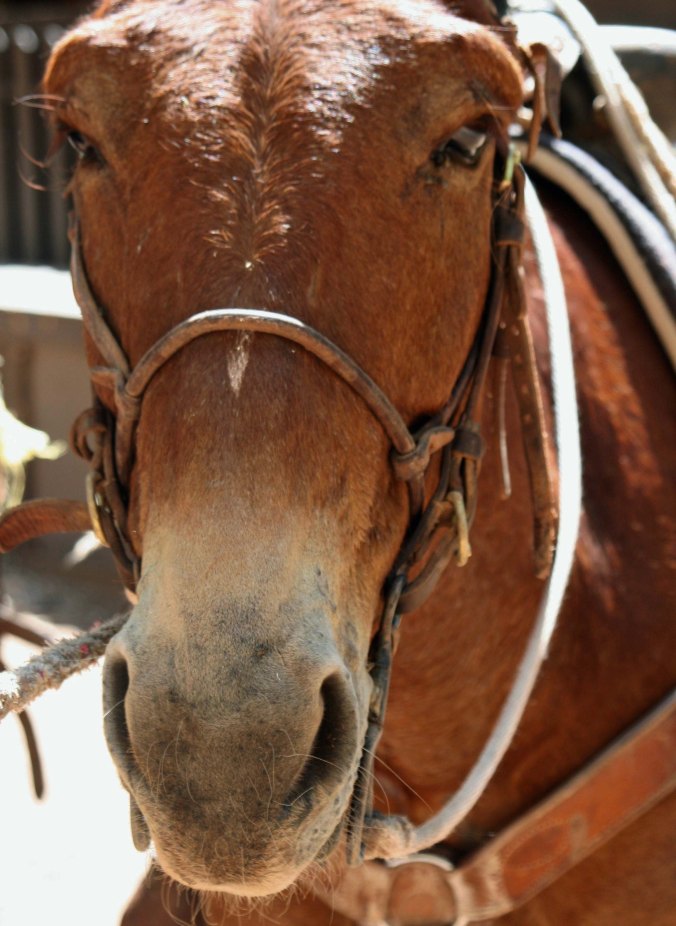 A mule welcomed us to Phantom Ranch… 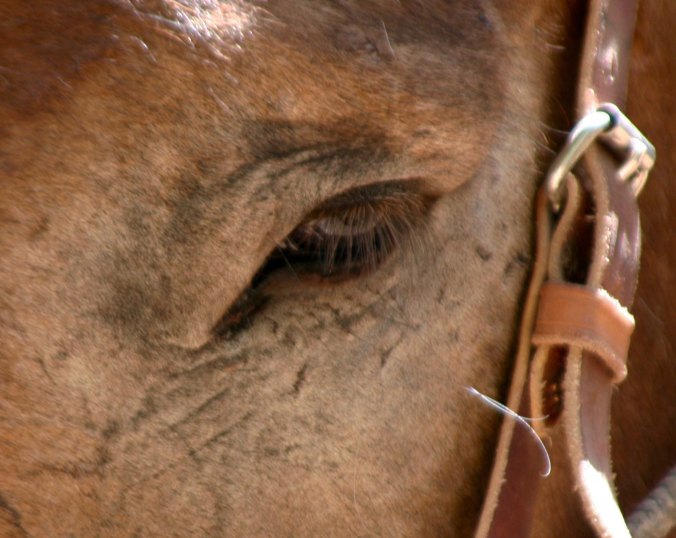 And gave me the eye. I know folks who would kill for those eyelashes. 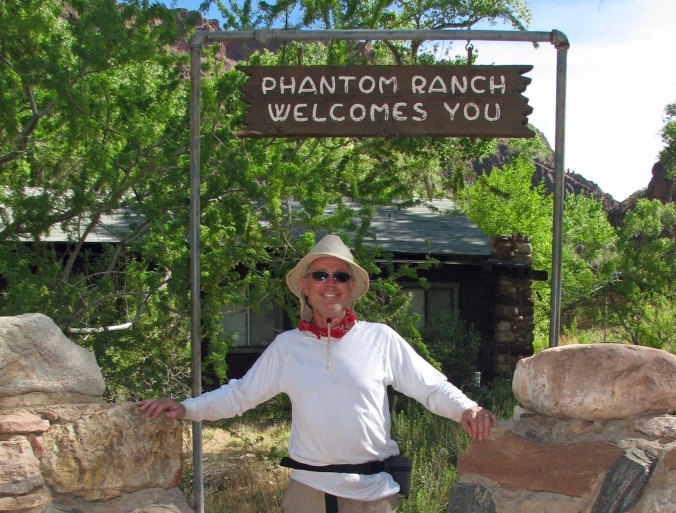 As did this bright flower with its bee on a beaver tail cactus.

I took this photo looking up from the ranch.

Nancy Pape, who pretty much spends her life hopping in and out of places, hiked out to the South Rim. I’ve known Nancy since the 70s when she first went with me on one of my hundred mile backpacking trips.

Jonas was supposed to be there early, according to Tom’s plan. We had miles to go before we were to sleep, to paraphrase Robert Frost. But another poet interfered. “The best laid plans of mice and men often go astray,” Robert Burns had declared. That had certainly been the case for Mousy who had had no intention of ending up as dinner on the edge of my sleeping pad at Tanner Rapids. And so it was for us.

Jonas had hiked down from the South Rim that morning, traveling some 9 miles and dropping 4600 feet. It was early afternoon when he arrived, exhausted. Like me, he is no youngster. He needed a nap. Tom insisted we make up for lost time, however, and away we went. Peggy and I agreed to ride with Jonas. We immediately found ourselves between a large rock and the shore with no room to maneuver— a situation we barely escaped only to careen across the river and bounce up against the wall. The raft climbed up to its tipping point, like it was eager to escape the river and us. I knew we were going over and could feel the icy waters sucking me under. But we didn’t. Jonas had both experience and adrenaline to counter his exhaustion. The raft kept its messy side up and we avoided a dunking.

Jonas and I had worked on environmental issues in Sacramento during the 70s.

Afterwards, Jonas and the raft agreed to cooperate with each other and we made it into camp without any more challenges. That was the night that Tom decided to wear Bone in his hair. I am not sure whether he was trying to appease or irritate the Canyon gods. Bone, who is quite used to strange encounters, told me later that they don’t get any stranger!

Susan Gishi gives Tom a ‘do.’ 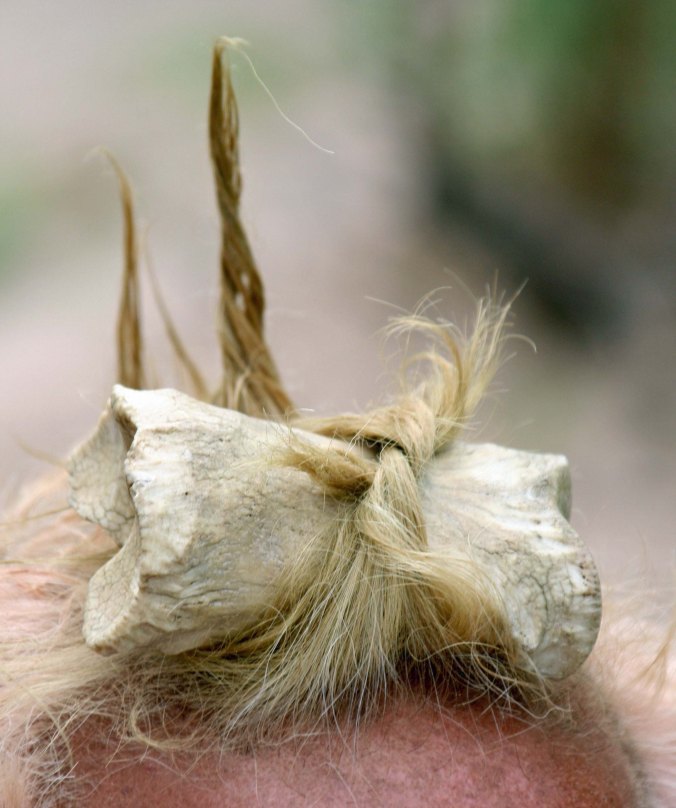 And Bone is added as an accessory. “At least,” Bone was heard to say,” Tom didn’t try to turn me into a nose decoration!.

Dinner was good that night…

And the sunset was fabulous. Or maybe the Canyon gods were commenting on Tom’s hairdo.

The next couple of days found us hiking through fast-moving water over slick rocks, maneuvering through one of the Canyon’s most challenging water falls, and jumping off a 20-foot cliff.

Shinumo Creek often provides a lovely wade up to a beautiful falls, hiding on the left. 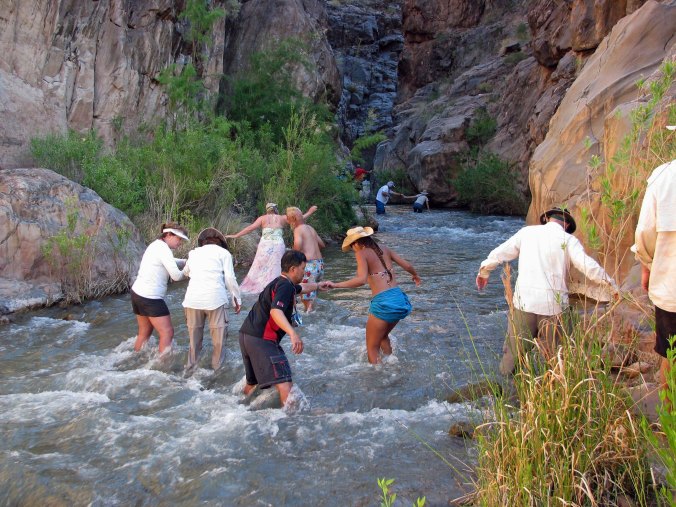 This time the creek was flowing so fast, we had to help each other to avoid being washed off our feet.

Steve is scouting what I think was Crystal Rapids. He seems to be suggesting we go back the way we came!

Later, we watched one of the commercial raft trips make its way through the rapids. We were on two very different types of trips.

“You have to hike up to these beautiful falls,” Tom urged and off we went on another adventure through a huge boulder field. I’d say we were rock hopping but the rocks were a little big to hop.

The waterfalls were indeed worth it, but I didn’t realize we were expected to jump off!

Let me report that the water was cold. That’s it for the day. I will continue our trip down the Colorado next Monday.

WEDNESDAY’S POST: Traveling through the Yukon Territory on the Alaska Highway.

FRIDAY’S POST: Another in the MisAdventure Series: Who shot Tony Pavy’s Pig?

33 thoughts on “We Visit Phantom Ranch, I jump Off a Cliff, and Tom Wears Bone… Rafting through the Grand Canyon”