A fading black and white photo shows children in Gbarnga, Liberia mugging for my camera in 1965. Life wasn’t easy– check out the head loads.

In 1965, my first wife, Jo Ann, and I joined the Peace Corps, graduated from UC Berkeley, and flew off to the country of Liberia where we were assigned as elementary school teachers in the upcountry town of Gbarnga. My book, “The Bush Devil Ate Sam” relates our experiences at Berkeley and in Liberia.

January was the Liberian school equivalent of summer vacation and second year Peace Corps Volunteers took full advantage of it by chartering a jet airplane and flying off to East Africa. First year Volunteers were left behind and had to take on a ‘summer’ project.

I decided to write a second-grade reader while JoAnn worked with a blind student.

I had spent my first semester teaching a second-grade class where the children were expected to learn to read out of well-used 1950’s era California readers. It was hard for the kids to relate. The world of Dick and Jane in their big houses with white picket fences and white playmates in no way resembled the life of my kids in Gbarnga, as demonstrated by the photo above. As for Spot, he bore a striking resemblance to food.

I had plunged into my project: researching elementary school readers, gathering African folk tales, and putting together stories about the children that reflected their lives, not those of Dick and Jane. The country Peace Corps staff liked the book I submitted. They agreed to assign me an editor, an expert in elementary school education, and an illustrator. But it wasn’t to be. The government decided that my book on African Folk tales and Liberian children was somehow dangerous, a threat to its one-party state. Peace Corps told me to forget the book and not even bring it up in conversations. I might be kicked out of the country.

Fortunately, I had other things to occupy my mind. Jo and I had been assigned to teach at Gboveh High School our second semester and were moving across town. There were classes to prepare for and our ‘new’ house was in desperate need of a paint job. We had also assumed in loco parentis status. One of the second-year Peace Corps couples, Dick and Sandy Robb, had left four little female kittens to live with us while they flew off to East Africa. Our pay was to have the pick of the litter. Whoopee.

I had built our temporarily adopted cat family a three-story mansion out of cardboard. It was a maze of rooms, hanging toys, hallways and ramps. It even had a carpeted floor and a bathroom— a kitty litter box. The kittens would disappear inside and play for long periods. We could hear them banging around as they stalked each other and attacked the hanging toys.

In a creative moment inspired by the evening cocktail hour, we decided to use the house as an intelligence test to determine which kitten we would keep. First, we waited until the kittens were appropriately hungry, and then we brewed up their favorite meal, fish head stew. Here’s the recipe: Take several ripe fish heads and throw them in a pan of boiling water. When their eyes pop out, they’re done.

Next, we encouraged the kittens to sniff their gourmet dinner and showed them that the meal would be located just outside the ground floor door of their mansion. Now we were ready for the test. Each kitten would be placed inside the third story door and given a nudge. We would then close the door and time how long it took the kitten to reach the banquet. Our theory was that the kitten with the quickest time through the maze of hallways and ramps would be the brightest.

Grey Kitten # 1 was a pudgy little character that never missed a meal. My money was riding on her. She breezed through the maze in three minutes sharp and set the time to beat. There was a chance that the sound of her munching away on fish heads might inspire the other kittens on to even greater glory, however.

Grey Kitten #2 was one of those ‘whatever it is you want me to do I am going to do the opposite’ type cats. Not surprisingly, she strolled out of the door seven minutes later and ignored the food altogether. (Afterwards, we were to speculate that she was the most intelligent cat and blew the race because she had no intention of living with someone who made her go through a maze for dinner.)

Grey Kitten #3 was the lean and mean version. Scrawny might be a better description. She obviously needed dinner the most and proved her mettle by blazing through the house in two minutes. The contest was all but over.

Kitten # 4 was what pollsters normally classify as ‘other.’ To start with, she was yellow instead of grey. She was also loud. In honor of her operatic qualities, Jo had named her Brunhilda, after the Wagnerian opera star. By the time her turn came up, she was impatiently scratching the hand that was about to feed her and growling in a demonic way. I gladly shoved the little monster in the third story door and closed it. We heard a scrabbling on the other side as tiny claws dug into the cardboard floor. Her race down the first hall was punctuated by a loud crash on the other end. Brake problems.

Then she was up and running again, but it sounded like toward us. Had her crash disoriented her? Suddenly the third story door burst open and one highly focused yellow kitty went flying through the air. She made a perfect four-point landing and dashed to the dinner dish. Her time? Ten seconds.

And that is how Brunhilda came to be our cat. Our decision to keep her led us to turn her over and check out her brunhildahood a little more closely. Turns out she had a couple of furry little protuberances where there shouldn’t have been any. She was a he. In honor of Brunhilda’s demonic growl and generally obnoxious behavior, we renamed the kitten Rasputin after the nefarious Russian monk. 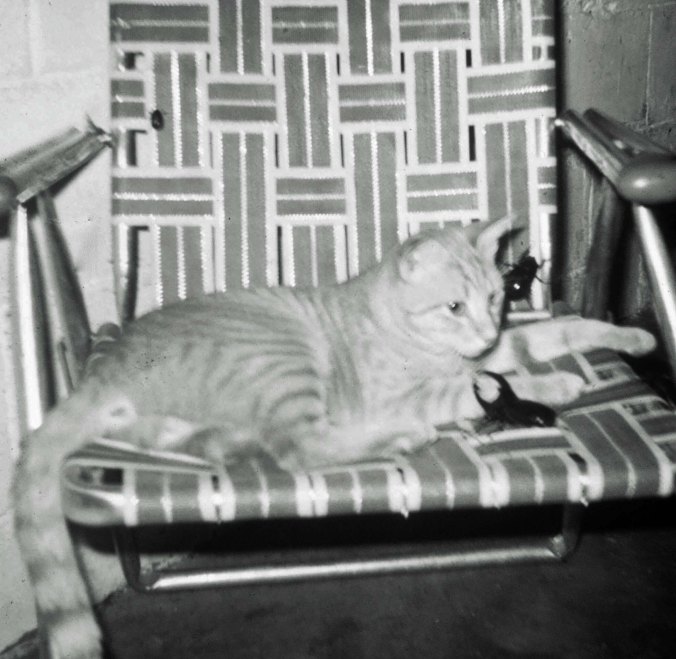 If you have enjoyed this story and the many other tales I share, you might also enjoy “The Bush Devil Ate Sam.” It’s available in both Kindle and paperback form here on Amazon. For other sources such as Apple, click on the book cover top right.