All of my wilderness experiences have been motivated by a go-light philosophy when it comes to food, which makes sense if you carry it on your backs. River runners, on the other hand, have rafts to carry everything. Other rules apply. Extra pounds don’t matter. And if you are going to carry all of these oranges, you might as well carry some alcohol to mix with your orange juice. (Photo by Don Green.)

The fact that we were full-time travelers made our Grand Canyon trip easier. There was no house, mail, job, pet or the other factors of normal life to worry about. We just pointed our van toward Flagstaff and drove, stopping along the way at places like Arches and Bryce Canyon National Parks. 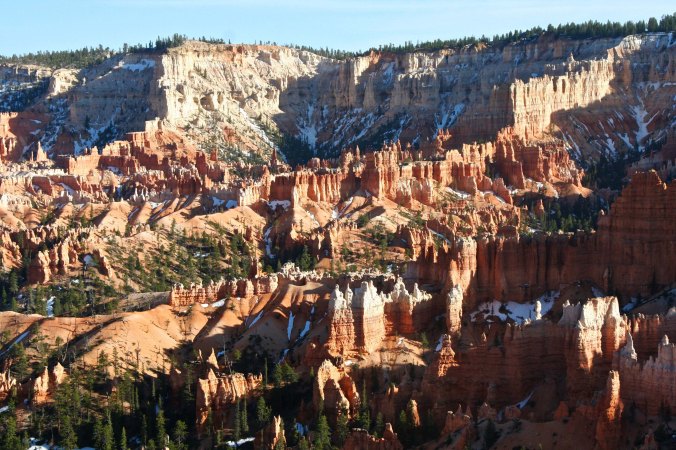 While our fellow rafters were scurrying to wrap up business to prepare for our 18-day raft trip though the Grand Canyon, Peggy and I were visiting Nationals Parks in Utah. This is Bryce Canyon. 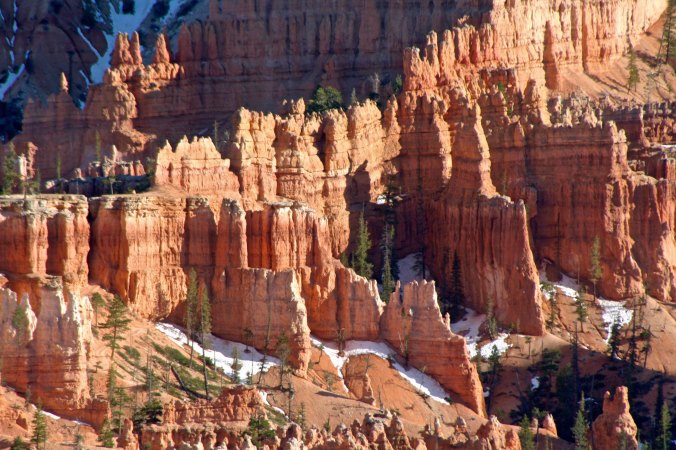 Another view of Bryce.

Great adventures usually start with mundane tasks, as most of you know. For example, did you cancel the paper? Common sense, travel pundits, (and probably your mother) admonish you that devious burglars have nothing better to do than to cruise the streets looking for rolled newspapers in front of your home.

More importantly, what about the cat?

Once upon a time Peggy and I had a cat named FE. Vacations meant I would carefully measure out twice as much food and water as she could possibly eat or drink and four times the kitty litter she might use. The likelihood of her using our house as a litter box was much greater that the likelihood of her starving. As a reward for my thoughtfulness, she would shed enough fur in our absence to fill a dump truck. For weeks after we arrived home, she would also pad into our bedroom in the wee hours each night and meow loudly to make sure we hadn’t abandoned her again. Or possibly it was punishment…

FE and her buddy, Sylvester, dressed for Christmas. Note FE’s Rudolph-red nose. I recall that a bit of photoshopping was required to get her ready for the Christmas letter.

We weren’t getting off scot-free on preparation for the river trip, however. In Flagstaff, we had food to worry about. Lots of it. Tom Lovering, his wife Beth and their friend Jamie Wilson arrived in Flagstaff three days in advance of our Colorado River trip. Their car was packed to the brim with empty ammo cans for things like cameras and huge ice chests for food. They were late.

The Department of Homeland Security had delayed their journey at Hoover Dam. The Agency is paranoid about mad bombers, rightfully so. And this was before the new bridge across the river had been completed; people still had to drive across the dam. A vehicle packed with C-4 could conceivably blow a big hole. Stern faced agents carrying guns were posted at each entrance. No smiling was allowed. Homeland Security’s normally low sense of humor (have you ever joked about a bomb during a security check at an airport) dropped to zero when the agents saw all the ammo cans Tom had packed in his vehicle. Rafters love these containers because they are waterproof and easily obtainable at Army Surplus stores. You can imagine what went through the minds of the agents. The whole car had to be unpacked and each ammo can carefully checked out. 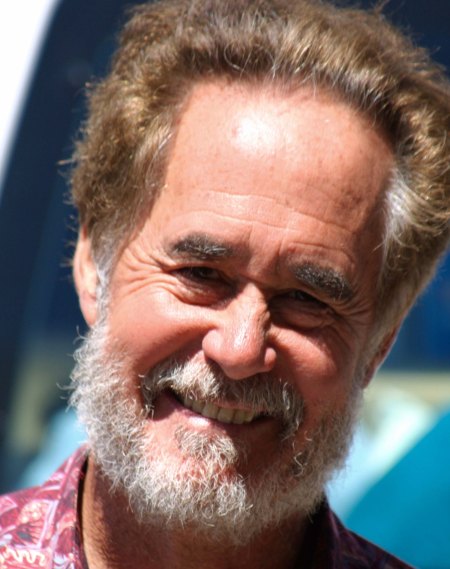 This was the face that Tom greeted the Homeland Security agents with— furry but friendly. His looks were about to change…

Tom getting a ‘do’ in Flagstaff…

What if Tom would have met the agents looking like this with green horns? We still might be waiting for him in Flagstaff.

Tom is even more paranoid about food than DHS is about terrorists. In addition to being a highly experienced rafter and trip leader, he’s an old restaurateur who had spent months planning the menu.  Each dish had been tested several times and quantities had been measured down to the teaspoon. Recipes were spelled out in minute detail. We would eat gourmet on the trip and cook it Tom’s way— or die. The options were clear.

Beth, Peggy and I were dispatched to Sam’s Club with marching orders. We filled seven large shopping carts with food. Think of it this way. There were 16 people going on an 18-day trip and eating three meals a day. This equaled 864 individual meals.

When we arrived back at the motel, Tom and Jamie had set up a staging area. Food needed to be organized by meal and day and then stuffed in the appropriate containers. The containers would then be assigned to rafts. It was important that we knew where to find the beer. 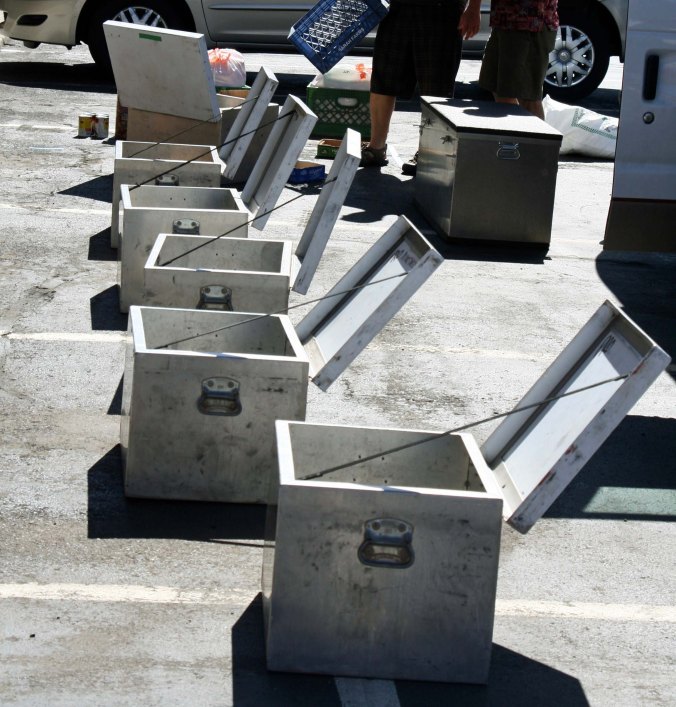 Large food chests waited for us when we got back to our motel. Each would be filled with food. Dry ice would be added to keep our food fresh for 18-days.

We still had to shop for perishables and more food was also coming from Sacramento. Our room, we discovered, was to be the recipient of most of the food. Apparently, it was written into the fine print of being ‘permit holder.’ There was barely space to sleep. Not that we slept much. Soon, we would be on the river! But first, Bone had to be appropriately dressed for his trip.

We went to Safeway to purchase our perishable goods, and once more our small RV was filled to the brim.

We discovered that the majority of the large food containers would be stowed in our room. With our own gear spread out on the bed, it was questionable if we would have room to sleep! Tom provides a perspective on the size of the ice chests. The yellow container is an ammunition can. 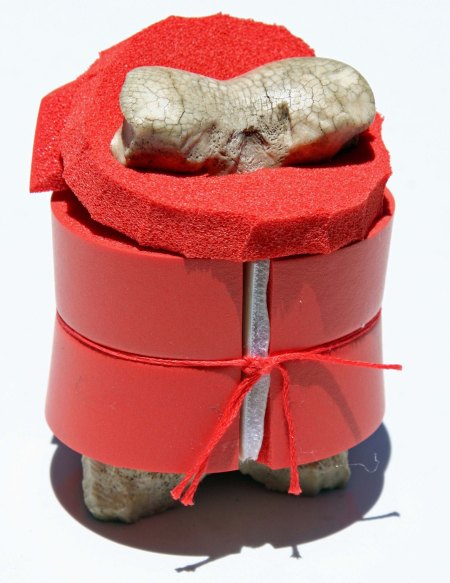 One of our final responsibilities was to make sure that Bone was adequately dressed for the trip in his PFD. Once, he almost fell off a boat in the piranha infested water of the Amazon. It would not do to lose him in the roaring rapids of the Colorado. Next Saturday and Sunday, I will provide background on Bone since he was an active participant on the river trip. 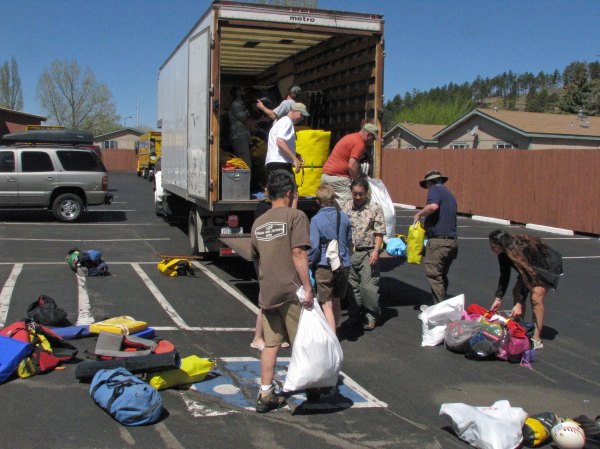 Finally, it was time to load our food and gear on this truck for transport down to Lee’s Ferry and the beginning of the trip. The truck was completely stuffed by the time we were finished. We were finally on our way! (Photo by Don Green.)

WEDNESDAY’S Photo Essay POST: A river boat trip on the Amazon River. The piranhas are biting and we bite back.

MONDAY’S Travel Blog POST: We start our raft journey through the Grand Canyon with 30 MPH headwinds. So much for a peaceful (between rapids) float down the Colorado!

21 thoughts on “Homeland Security Goes Searching for a Bomb… Rafting through the Grand Canyon: Part 3”