There is no doubt about the beauty of Ocean Shores. This photo looks out into Grays Harbor. The Pacific Ocean is off to the right.

Several years ago, Peggy owned some property in Florida down around Port Charlotte. She and her first husband had purchased two pieces as an investment in one of the huge Florida land schemes. The first parcel, located on a man-made canal, had sold easily long before I knew Peggy. The second piece, which might best be described as swamp-land, was still hanging around when we met many years later and was valued at less than the original price. With skyrocketing real estate values in the mid 2000s, we were finally able to sell the land to some questionable characters out of Miami who had dollars to burn for a small profit. We breathed a huge sigh of relief and turned the money over to our kids.

I only tell this story now because Ocean Shores on the central coast of Washington has a similar history. Developers were going crazy in the 60s and purchasing oceanfront property as cheaply and as quickly as they could put together deals. Land was then subdivided, roads put in, and prices jacked up to create substantial profits. Potential buyers were fed glowing stories about the beauty of the land, its recreational value, and the potential for future profit. It didn’t matter if the land was part of a swamp or that profits would be far into the future.

Land speculation in the US is as old as our country. George Washington may have been the “Father of the Nation” but he was also the father of rampant land speculation, a pursuit he was joined in by the likes of Ben Franklin, John Adams, and other founding fathers who invested in as much land out on the western frontier as they could lay their hands on. (It didn’t matter if the land was already occupied by Native Americans.) It can be argued that one of the reasons for the Revolution was that the British wanted to curtail such speculation.

The Ocean Shores Development Company purchased the area that would become Ocean Shores in 1960 for $1 million. Its location on a peninsula with the Pacific Ocean on one side and Grays Harbor on the other provided a lot of waterfront property to sell. The company quickly brought in a dredge to build canals to create more.  Hollywood personalities such as Pat Boone were recruited for promotion and the land boom was underway. In 2003, National Recreation Properties bought hundreds of lots in Ocean Shores and then resold them at three and four times what it paid. Eric Estrada from CHIPS was brought in for promotion purposes this time. Today, with limited oceanfront property available on the West Coast, property values continue to escalate. 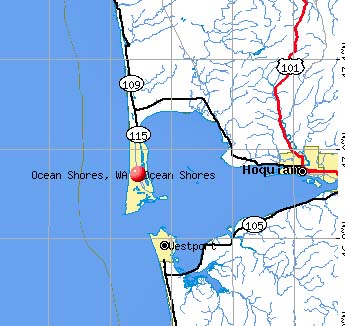 Ocean Shores’ peninsula location means it has lots of waterfront property. Man-made canals built throughout the area have added even more. We were staying north of the community up toward the Highway 109 marker.

Peggy and I drove around the peninsula and checked things out. It was an attractive area and I could see why people would want to live in Ocean Shores, but I couldn’t help but think about the community’s low elevation. It would provide scant protection in a Tsunami and, barring that disaster, might be inundated by rising ocean levels. But that’s me. I am sure potential buyers and real estate agents see it differently. Following are a few photos from Ocean Shores and more from where we were staying at Copalis Beach.

Another view looking out into Grays Harbor as the tide rolls in. 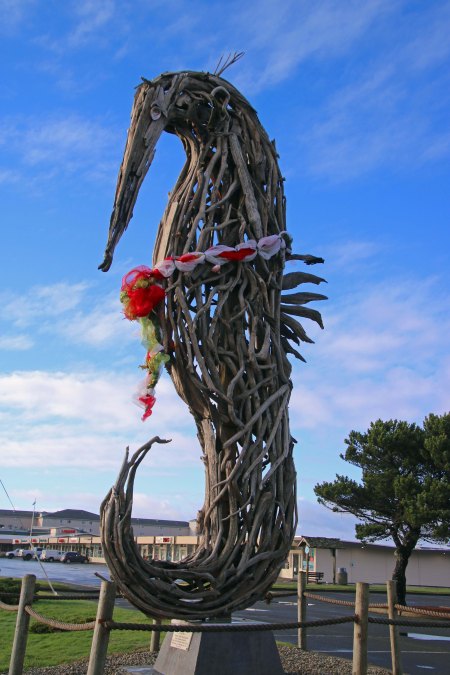 The city of Ocean Shores has added some neat driftwood art as an attraction. This seahorse was decked out for Christmas. (Photo by Peggy Mekemson.) 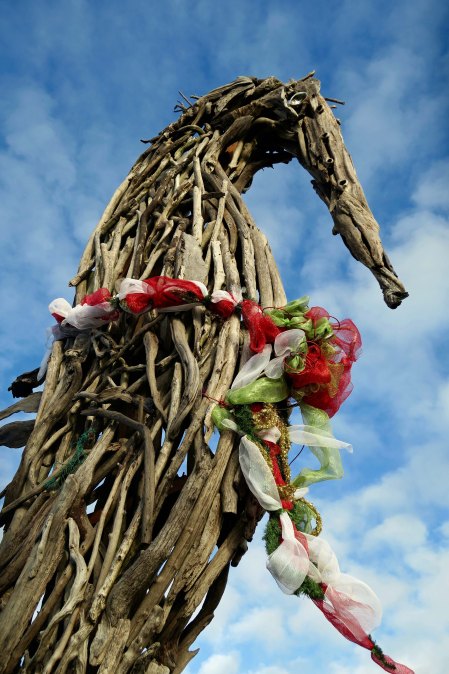 Another perspective by Peggy. 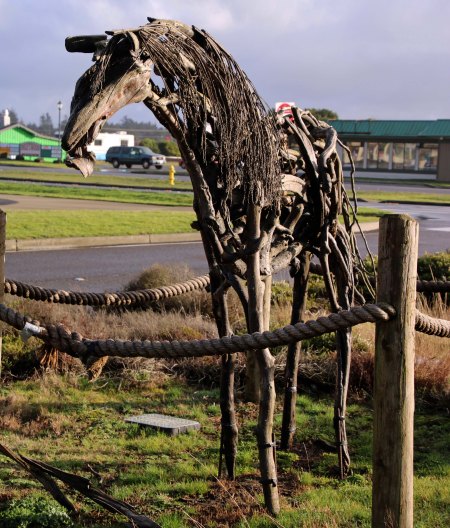 Having decided that she really liked the driftwood art, Peggy walked across the road and captured this skinny-legged horse. 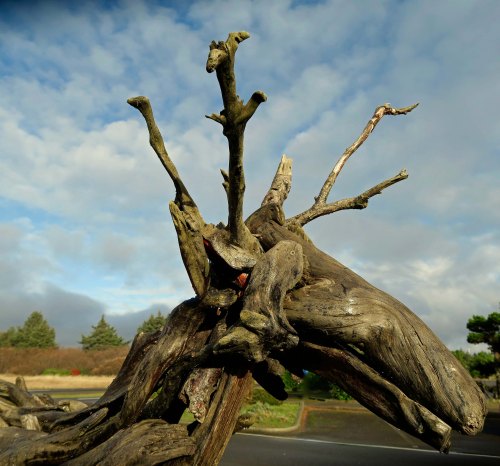 While I photographed a deer. I liked its antlers. 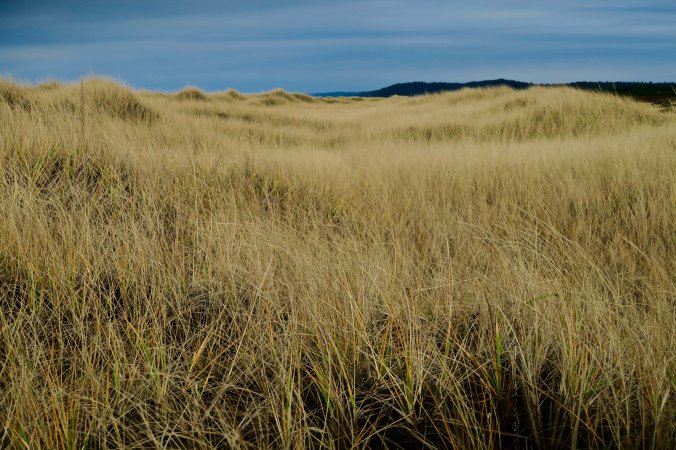 Back at where we were staying in Copalis, we decided to celebrate our final evening by hiking out to the ocean again. It was just across the small dunes. 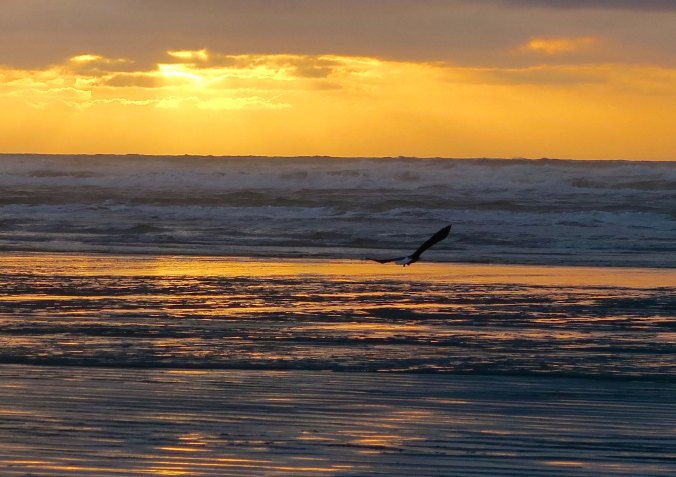 As the sun started to set, we were joined by a bald eagle.

Then the sun captured our attention.

Peggy decided to go in search of it across the long, flat beach…

Where she was greeted by moonrise. 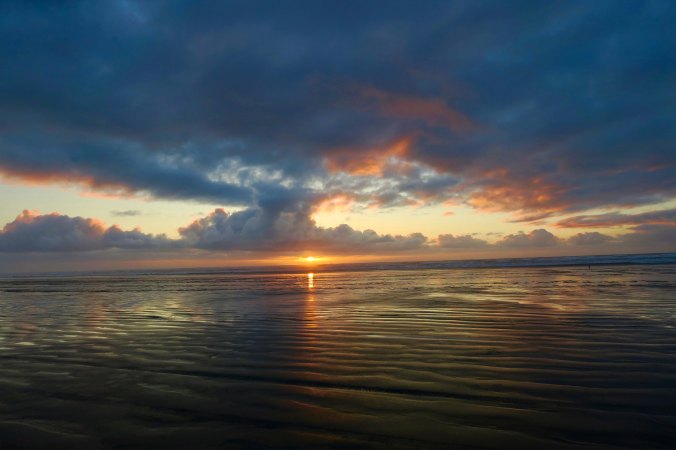 We stood holding hands as the sun completed its journey. And then returned to the condo. It was time to pack up and head home…

FRIDAY’S POST: Nancy Jo and the attack of the Graveyard Ghost