Peggy and I explored the southern and southwestern part of Scotland with its rolling hills and green, green pasture lands.

Today I am returning to the Wednesday photographic essay part of my blog. This time I will feature the southwestern area of Scotland with a few photos of Edinburgh thrown in. Peggy and I shared in taking the photographs.

Peggy, Jane, Jim and I wrapped up our narrowboat tour and then hopped on a train bound for Edinburgh, Scotland where we hung out together for a few more days before parting company. Jane and Jim returned to London while Peggy and I rented a car and headed out on a quest. I was eager to see some of the areas my ancestors had come from including the grave of a long dead Presbyterian martyr, John Brown, who had been shot down in the 1600s because he refused to recognize England’s king as God’s representative on earth. The Presbyterians were stubborn that way.

Edinburgh is an impressive city that is very easy to get lost in, or at least get lost trying to get out of!

The Duke of Wellington.

The car rental place upgraded us to a Mercedes and wished us good luck on finding our way out of the city.

Is this woman determined or deranged? And is she really biting the steering wheel? I thought that she was a bit old for a teething ring.

We quickly discovered that there are a lot of sheep in Scotland— big woolly creatures. They like to stand in the middle of the road and refuse to move. 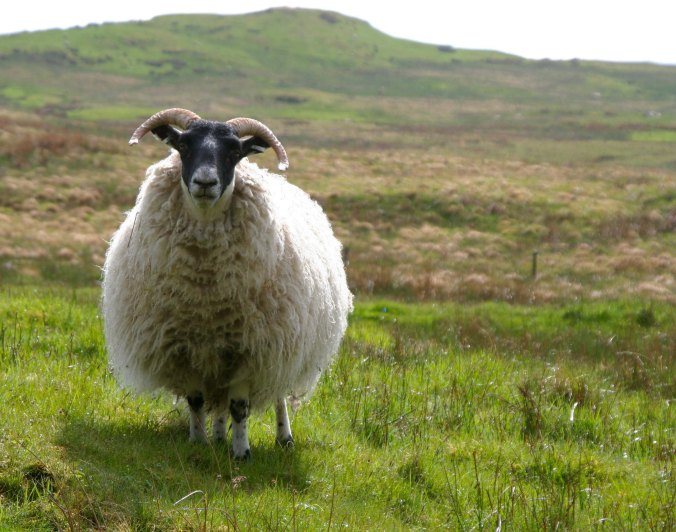 “My road!” Peggy and I were on a great detour (we were lost again) when we came on this sheep blocking the road. I thought I might have to get out of our car and pull a Crocodile Dundee on it. The red marking is to show ownership. 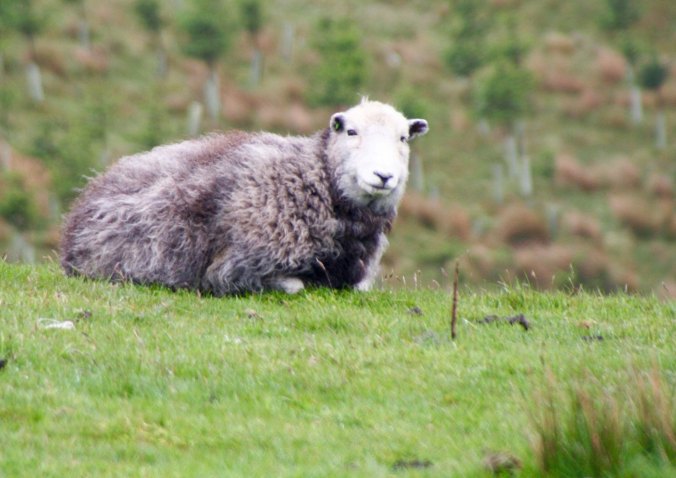 Hungry. The great range wars of the Western United States between cattlemen and sheepmen in the 1800s were partially because sheep like to crop the grass so close to the ground.

This steer seems to agree about sheep. 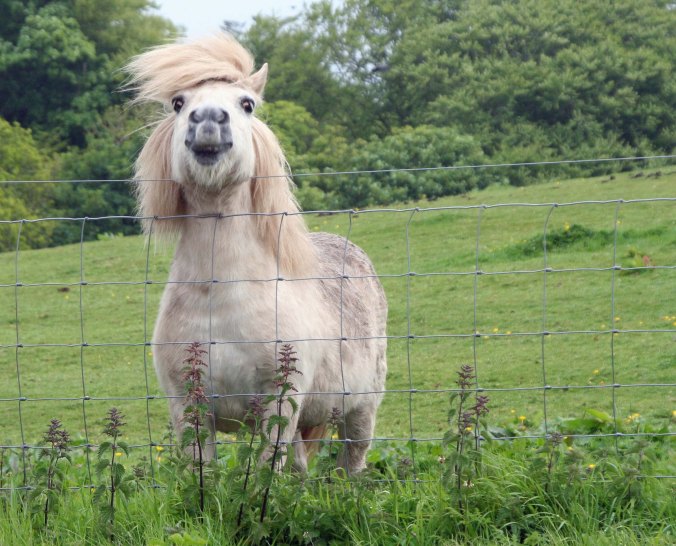 And who knows what this wild Shetland was thinking?  It may have thought we were good for an apple. Or maybe it was a reincarnated ancestor of mine trying to make contact…

We checked out several graveyards. I was, after all, searching for dead people.

These tombstones were so large they could have had books written on them. Wait, they did. Check out the light gray marker on the right.

Peggy demonstrates just how big the tombstones were.   If I am correct in reading her body language, she is saying, “And how many more graveyards are we going to visit today, Curt? Don’t you realize it is raining and cold out here?” (Actually, Peggy is a great sport about visiting graveyards and this might have been one of her ancestors.)

Castles were also on our itinerary. There are bunches in Scotland. Each lord wanted one to protect himself from the English— or his neighbor. One of my fifth cousins had assured me that the Mekemson family once owned a Scottish Castle, but it was north of Edinburgh. 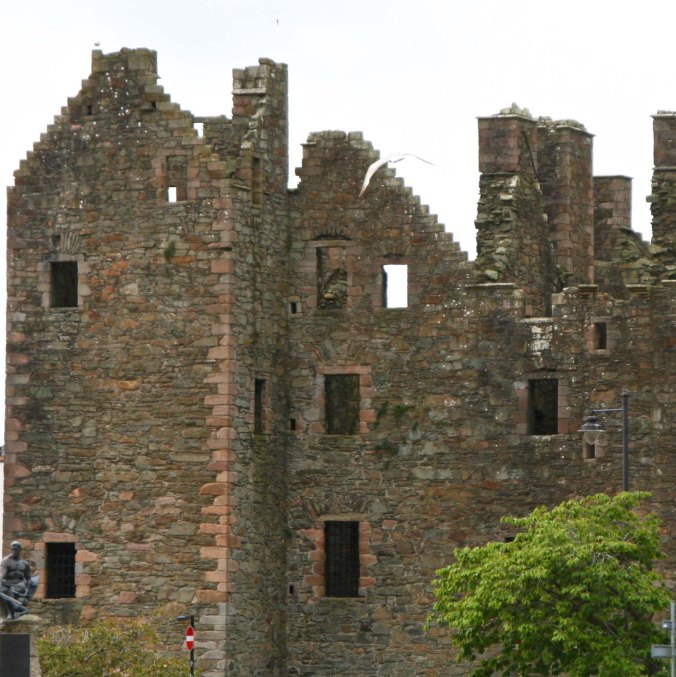 Old castles are a feature of Scotland. They are well built, but a bit airy. 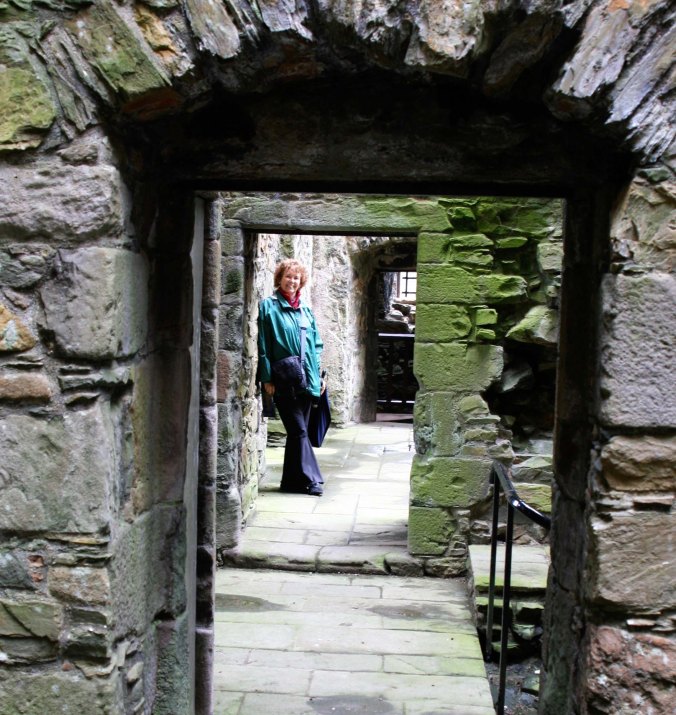 I found a winsome wench in one. Oh wait, that was a fair maiden!

Most of our time was spent admiring the beautiful scenery and fun towns plus visiting with the warm and welcoming people of Scotland.

The River Nith in Dumfries.

Scotch Broom was everywhere, adding its beautiful yellow to hillsides.

I am a fan of stone walls. Fences don’t get much classier! But imagine the work… 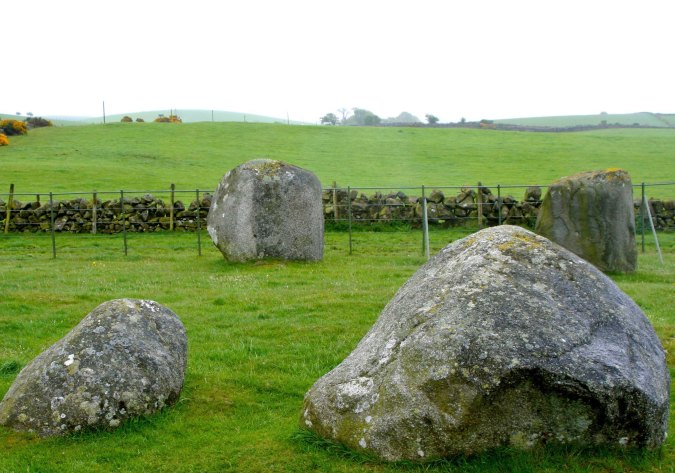 Speaking of moving rocks, these boulders were placed here several thousand years ago as part of a sacred site. 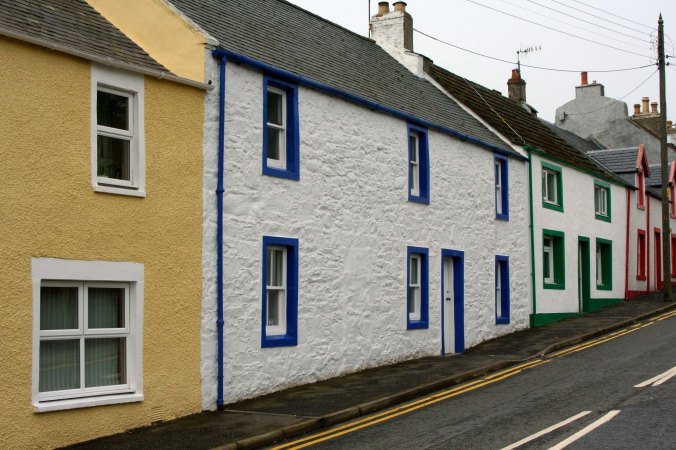 Small towns were colorful and clean. Kirkcolm was where my great-grandmother on the Thompson side was from. It’s where we met the Shetland.

And this might have been the home of her father.

A fun window with posies.

And a flower pot built into the front of a building to wrap up today’s post.

FRIDAY’S Blog-a-Book POST: The animal kingdom is kicked off my bed

MONDAY’S Travel Blog POST: A wrap up on the central coast of Washington