The first people came wandering through Arches some 10,000 years ago as the last of the glaciers were retreating north or scooting up mountains, seeking colder climates. The nomads were hunter-gatherers, killing wild animals for food and seeking out edible plants where they grew naturally. They must have been impressed with the magnificent rock sculptures they saw. Possibly they even gave the soaring arches, spires and fins spiritual significance. What caught their attention from a practical point of view, however, were the chert and chalcedony rocks that could be chipped into stone tools such as knives and scrapers. Left over debris piles can still be seen by those trained to look for them.

The wandering hunters and gatherers were replaced by farmers some 2,000 years ago. The Arches area was on the northern edge of the Puebloan culture, which was known for its cliff dwellings. A lack of such abodes in the area, however, suggest that Arches was more of a place to visit than occupy. About 700 years ago, the Puebloans apparently abandoned the area altogether for whatever reason they were disappearing from their homes throughout the Southwest. Drought, disease, or invasion are among the causes normally given.

When the first Europeans entered the area, they found it occupied by the Utes, a Native American tribe from which Utah took its name. It is assumed that the rock art panel shown below was created by the Utes since the Indians were riding horses and there weren’t any in North America prior to the arrival of the Spanish Conquistadors. Interestingly, a section of the Old Spanish Trail that was used by Spaniards to travel between Santa Fe, New Mexico and Los Angeles in the late 1700s/early 1800s actually runs in front of the park headquarters following Highway 191.

A closer look suggests that the Utes were waving their arms and driving the sheep with the help of dogs. Native Americans were known to drive buffalo but I have never heard of the technique in relation to sheep.

In hopes that the arid climate of the region would be good for an old Civil War war wound, 69-year-old John Wesley Wolfe left his wife in Ohio in 1898 and settled near Delicate Arch and the Ute rock art north of the town of Moab. He brought his son with him and built a primitive cabin. There was enough space to raise a few head of cattle and vegetables. More sophisticated needs were met by shopping out of the Sears and Roebuck catalogue. When his daughter, her husband, and two children arrived a few years later, she insisted that Wolfe provide more modern accommodations. He complied by building the 11 by 17 foot one room cabin that still stands today. It must have been cozy.

The Wolfe’s cabin as it looks today. Delicate Arch is off to the right. The Ute rock art is located on the cliffs behind the cabin.

A closeup of the cabin rendered in black and white.

While the Colorado River forms the southeastern border to Arches National Park, it is the La Sal Mountains that provide a dramatic backdrop for many of the rock sculptures found in the park. Towering over 12,000 feet in height, the La Sal’s are part of the Rocky Mountain chain. I’ll conclude my series on Arches with several photos that Peggy and I took of the mountains as seen from Arches. 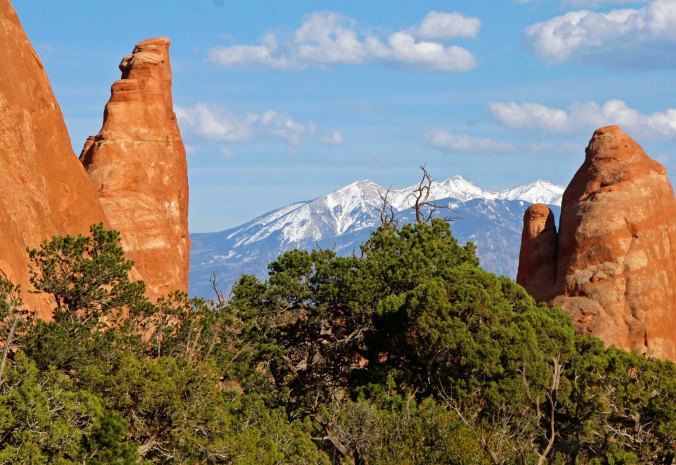 I liked the contrast between the red rocks, green brush and blue mountains. 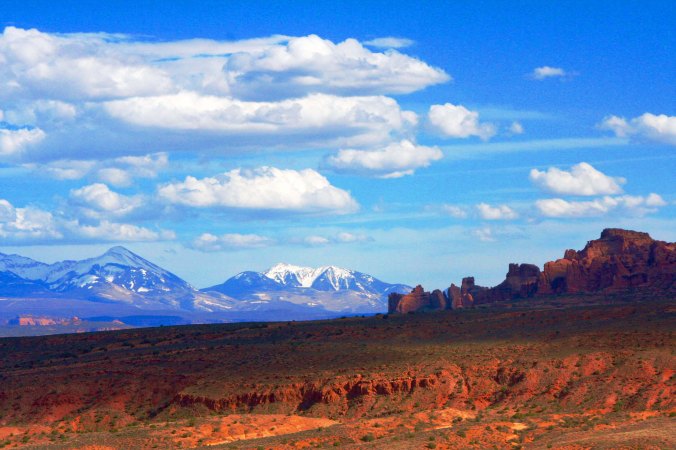 I’ll conclude with this tree that was set off by the red rocks.

NEXT POSTS: Hot off the press: Peggy and I are on a two-week trip up the coast of northern Oregon and southern Washington to celebrate our 25th Anniversary. Expect crashing waves, tumbling waterfalls, rainforests, a picturesque lighthouse, towering ocean rocks and quaint towns.