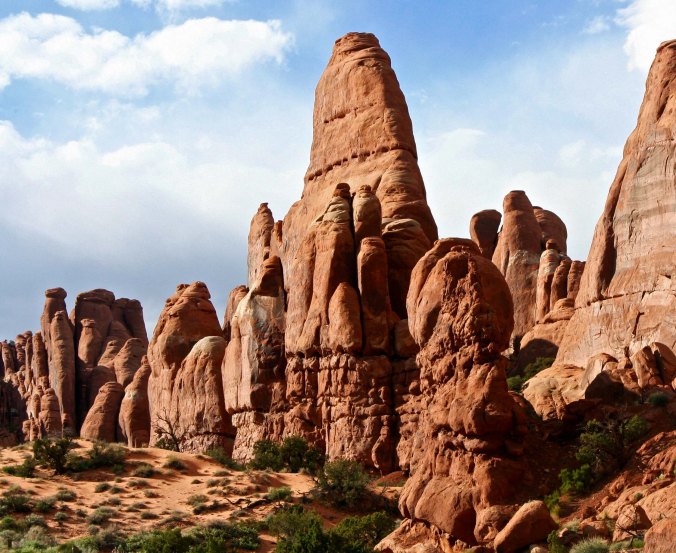 The red rock sculptures of the Southwest US are both beautiful and strange, firing our imagination while calming our souls. Few areas capture this paradox as well as Arches National Park. It is one of our favorite places.

“The desert wears… a veil of mystery. Motionless and silent it evokes in us an elusive hint of something unknown, unknowable, about to be revealed. Since the desert does not act it seems to be waiting — but waiting for what?” – Edward Abbey, 1968 in his book Desert Solitaire where he recounts his two years, 1956-57, as a park ranger in Arches.

I have a confession to make. I suggested in my last post that I was going to feature the petroglyphs of Utah’s Arches National Park next— and there are petroglyphs there that I will include in this series. But my real reason for posting on Arches was that I wanted an excuse to revisit our last trip there and share the beauty of the area with you. Peggy and I had been on our way to a private raft trip on the Colorado River through the Grand Canyon when we stopped off at Arches. The clock was ticking. Consequently, we had been forced to rush through the park. Selecting and preparing the photos for this series on Arches allows me to relive the experience at a more leisurely pace.

Arches is known for its graceful arches: There are some 2,000 scattered throughout the park. But there is much more to Arches that arches! This beautiful red rock country also includes pinnacles, balanced rocks, spires, domes and fins— all of which I will be sharing.

Geologically speaking, we have to go back some 300 million years to discover the beginning of the forces that created Arches. The area was part of an extensive sea at the time, a sea that would retreat and refill some 29 times, leaving behind layers of salt several thousand feet thick. Eventually, the mountains and highlands that surround the region eroded away and covered the salt with multiple layers of sandstone. Since then, the salt, which is less dense than the rock, has forced the sandstone up, warping it and producing domes and mesas that have in turn been eroded away by wind, water, ice and gravity into the fantastic rock sculptures we see today.

My plan for this series is to include four posts:

Peggy and I were sharing a camera with each of us taking shots whenever something caught our attention. We have long since lost track of who took what. So, we are sharing the photo credits.

These domes feature the two common sandstones found in Arches: The reddish entrada sandstone which evolved from desert sand and the more buff-colored Navajo sandstone. 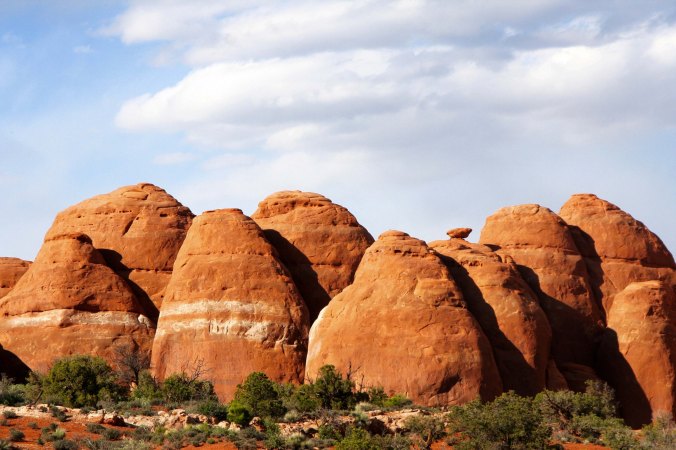 Peggy and I liked the way these pinnacles marched off into the distance.

And here seemed to lean on one another for support.

In bright daylight, a family portrait.

Early morning and late afternoon adds color to the sculptures of Arches. Check out the little guy on the right with his hands in his pockets. He seems to be staring off into space. You can even see the buttons on his shirt!

More red, set off by the green of the plants that were capturing the sunlight.

Early morning light. If you make it to Arches, be sure to plan enough time there to visit during the early morning, mid-day and evening. Each will bring new treats, often giving a totally different perspective on the same rocks.

I’ll close today with the Three Gossips. Prominent rock sculptures at Arches National Park have all been named. To me, the rocks often seem to have an inner luminosity, glowing on their own!

NEXT POST: The balanced rocks and fins of Arches National Park.