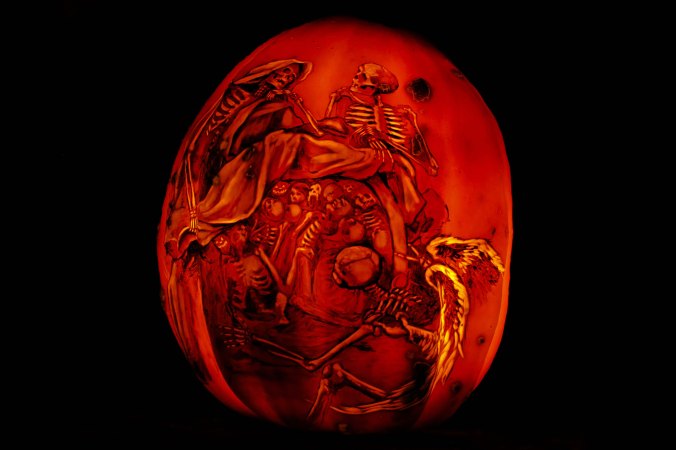 Skeletons were popular subjects during the Renaissance. I don’t recognize the source for this etching , but the subject seemed appropriate for a Halloween theme. Note the two on top having a chat.

Continuing my Halloween series on the Jack-o-Lantern Spectacular of Providence, Rhode Island, I will feature art-carved pumpkins with a Renaissance touch today in my photos. The written content will include another of my ghost ‘encounters’ that are always good subject matter for the season. Again, if you have been following this blog for a while, you may have heard these stories on Halloween pasts.

I grew up next to a cemetery that was filled with weed-like Heavenly Trees. Cut them down and they grew back so thick that the tombstones disappeared, which was a good thing.

During the day, it took little imagination to change this lush growth into a jungle playground populated with ferocious tigers, bone crushing boas, and half-starved cannibals. My brother Marshall and I considered the Graveyard an extension of our backyard. Since it was within easy calling distance of the house, our parents apparently had a similar perspective. Or maybe they were just glad to get rid of us. The jury is still out.

Night was different; the Graveyard became a place of mystery and danger. Dead people abandoned their underground chambers and slithered up through the ground as ghosts. A local test of boyhood bravery was to go into the Graveyard after dark and walk over myrtle-hidden graves, taunting the inhabitants. Slight depressions announced where they lived. When I was six, Marshall, who was eight, persuaded me to accompany him there on a moonless night. I entered with foreboding: fearing the dark, fearing the tombstones and fearing the ghosts. Half way through I heard a muzzled sound. Someone, or thing, was stalking us.

“Hey Marsh, what was that?” I whispered urgently.

“Your imagination, Curt,” was the disdainful reply.

Crunch!  Something was behind a tombstone and it was not my imagination. Marshall heard it too. We went crashing out of the Graveyard with the creature of the night in swift pursuit, wagging its tail.

“I knew it was the dog all of the time,” Marsh claimed. Yeah, sure you did. 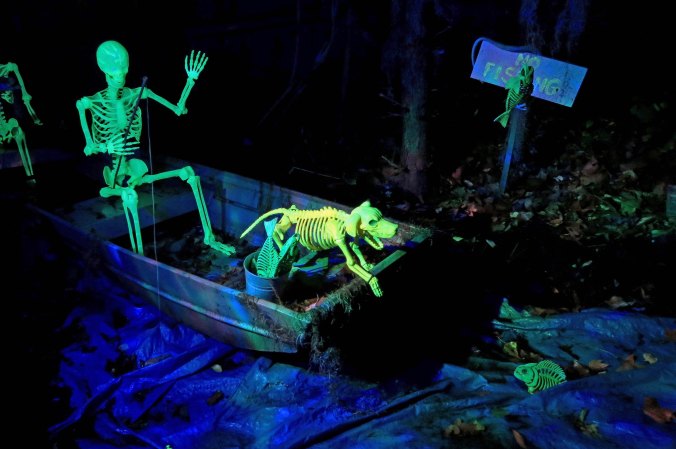 This ghostly skeleton dog we found at the Spectacular was much closer to what we thought was chasing us than the family pet.

The only thing scary about Mona Lisa is people are always wondering what sort of mischief she might have been up to.

Laocoön and his sons being attacked by snakes for warning the Trojans was a sculpture created by the early Greeks/Romans and dug up during the Renaissance. It’s scary.

The headless Medusa having a bad hair day is even scarier.

Venus emerging from the ocean with her oyster shell transportation. Not scary.

I’ve always liked this Renaissance depiction of day and night. 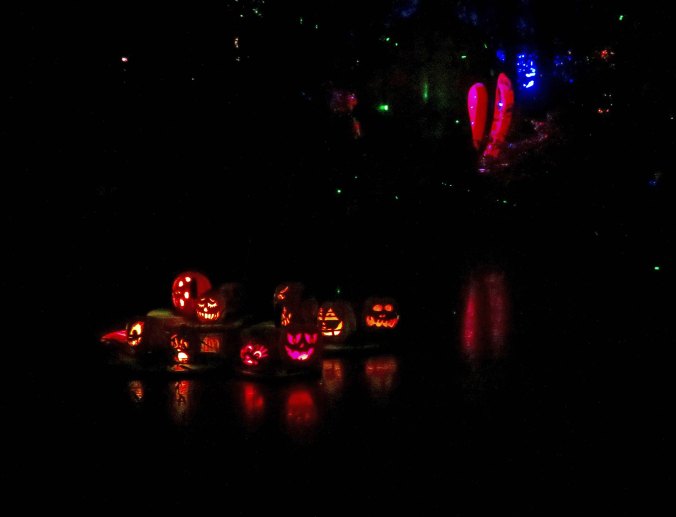 Pumpkins are reflected in water while a big-eyed fellow lurks behind. 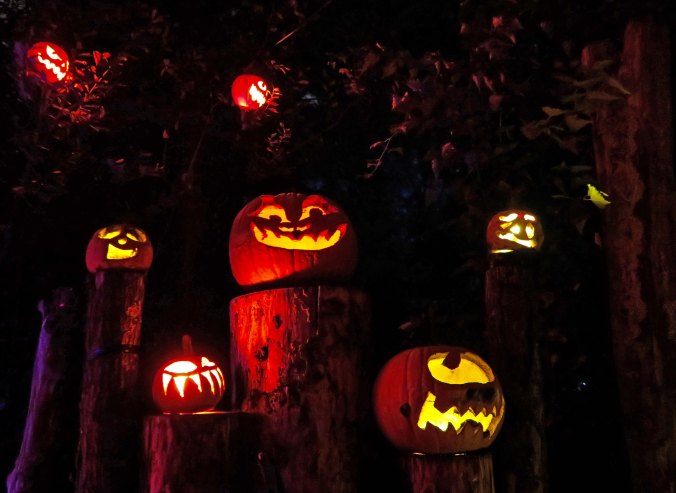 These fellows seem a bit confused. I think they are stumped. (grin)

Mona Lisa’s mysterious smile has nothing on this guy. Mischief is almost guaranteed.

NEXT POST: I will tell the story about a demon that lived with us while we were growing up. It doesn’t get scary until the last sentence! Art-carved pumpkins will range from King Kong to Popeye.

13 thoughts on “A Ghostly Grave-Yard Tale… The Jack-o-Lantern Spectacular of Providence, RI: Part 5”