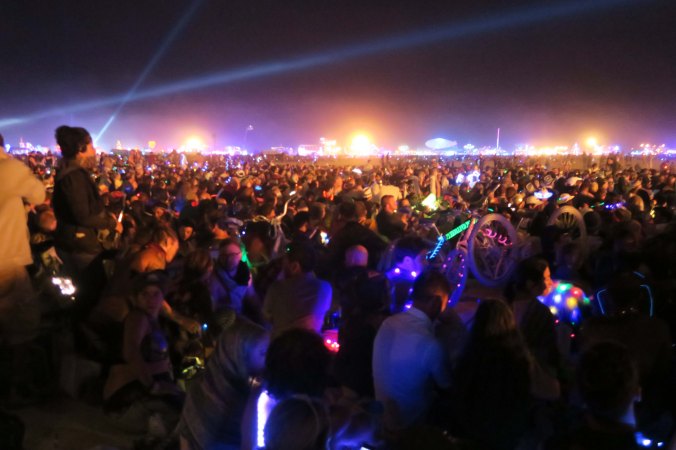 70,000 people encircle the Man on burn night. Mutant vehicles can be seen lighting up the sky in the distance.

Call it a huge party, if you want. Or a solemn ceremony. It’s a bit of both— the one event at Burning Man that almost everyone attends. People begin wandering out to the Man early on Saturday evening while the best seats on the Playa are still available. These are prime, sit in the dirt seats, where you get to watch the whole show up close and personal, where you can feel the heat. Burners travel by foot, bike and mutant vehicles. They arrive as individuals and in large groups, often walking behind a leader who holds up a long, lit wand that everyone can see. A circle has been laid out around the Man to establish the boundary of how close people can sit. Only Black Rock Rangers, performers, firemen, and the specialists that oversee the burn are allowed inside. A sizable promenade lies just outside the seating zone. Beyond that, mutant vehicles rule, hundreds of them ranging in size from huge to small and ringing the man. Thousands of bikes are parked farther out. It’s important to remember where— and easy to forget.

The burn is carefully orchestrated with BMORG more or less doing the same things in the same order every year. It starts with an official parade out from Center Camp carrying the fire that will be used to light the Man. The fire has been burning all week in front of the Center Camp Café, lit by an Earth Mother (or is that earthy) who utilizes the sun and a mirror. There is always a band with the parade, people on stilts, and a cart that carries the fire. Next fire dancers perform within the circle, hundreds of them twirling and dancing in a dozen different ways. There were even fire-breathers this year, spitting out flame and then taking another gulp of fuel. Finally, it’s time for the Man to raise his arms and signal the beginning of the burn. Fireworks cascade down and then shoot out in all directions, working inward until the Man is bathed in flame. After that, Burners watch and wait until the Man and the structure that holds him fall into the fire. A moment of silence, followed by a huge roar greets the fall. Then it is back to Black Rock City to party the night away, or join the long line of Burners heading home, often taking 4-6 hours to make it the five miles to the road.

I parked my bike at the Center Camp Café this year and walked out to the Man, following the Dixie Land band, stilt walkers and fire cart. Monitors made sure I kept my distance. I arrived well before the fire dancers started, so I strolled the promenade, walking in a full circle around the Man, and taking photos. Noise ruled. Dozens of mutant vehicles blasted music and fire into the night. Hundreds, if not thousands of people danced. Others scrambled for seats or simply walked the circle like me, checking out the elaborate costumes that Burners wore and the brightly lit mutant vehicles. I stopped to watch people dance and moved a bit myself, before moving on. A young man hit on me, emphasizing how he liked the company of older men. I made a not so graceful exit. By the time I had completed my walk, the fire dancers were strutting their stuff. It was too late to sit, but I found a good location to stand and watch the show. The dancers finished, the fireworks filled the night sky, and the fired burned. I left before the last of the structure came tumbling down. 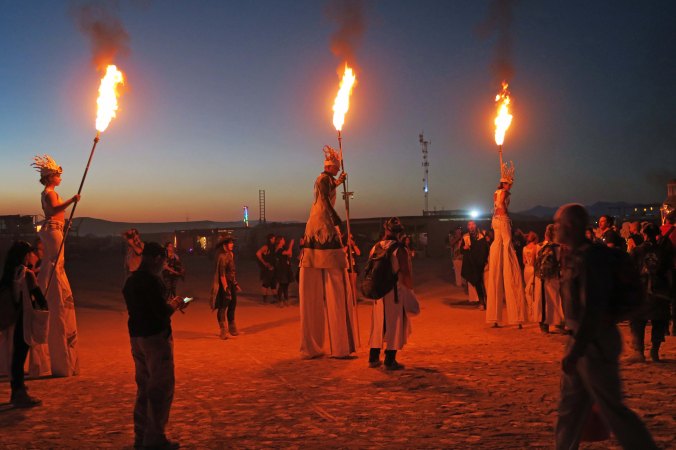 People on stilts are part of the parade that takes the fire out to the Man. It’s a long walk. 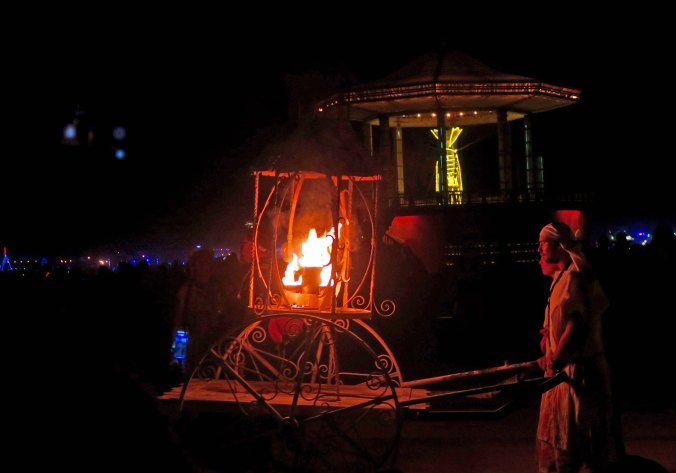 The fire to light the Man is carried in a cart. The Man looks on from inside the Temple of the Golden Spike. 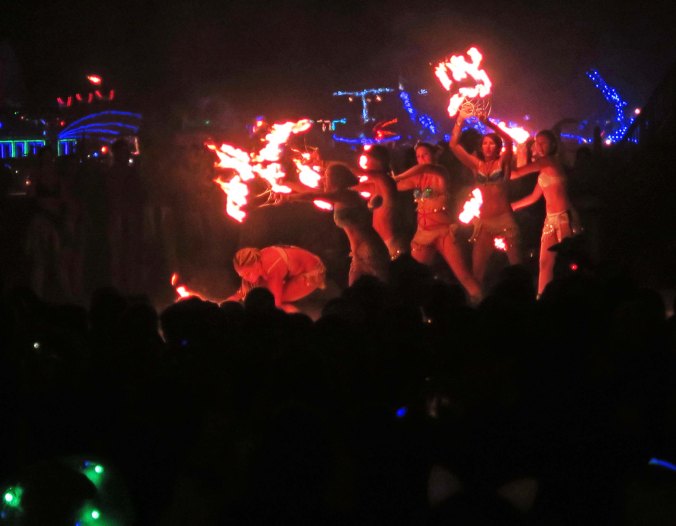 I was too far out to get a good shot of the fire dancers, but there were hundreds of them performing all around the circle.

When the Man raises his arms, the fireworks display starts with a bang. Here they were shooting out from the golden spike. 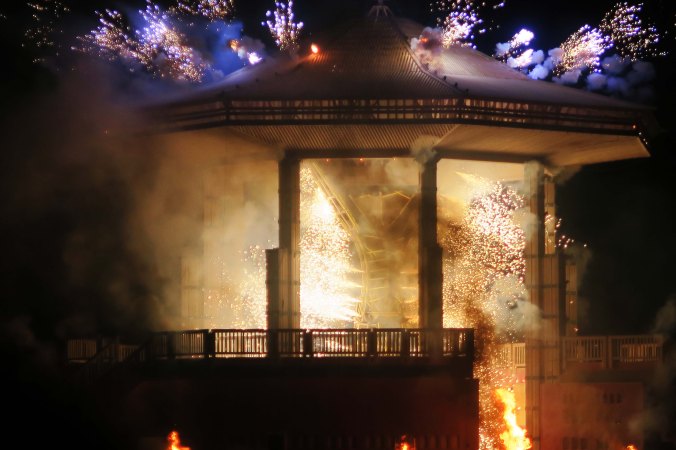 Even the Man gets into the act, shooting out flames. 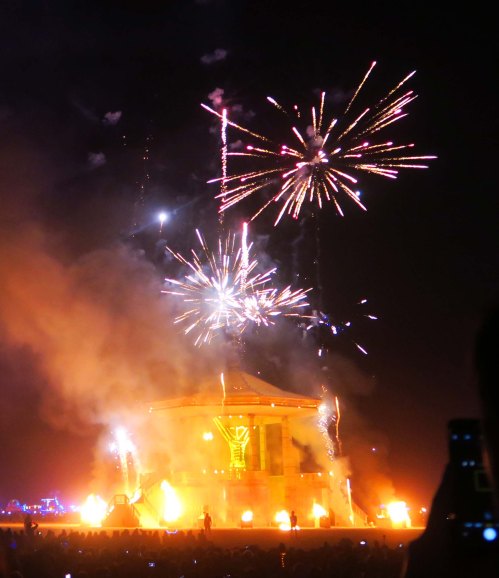 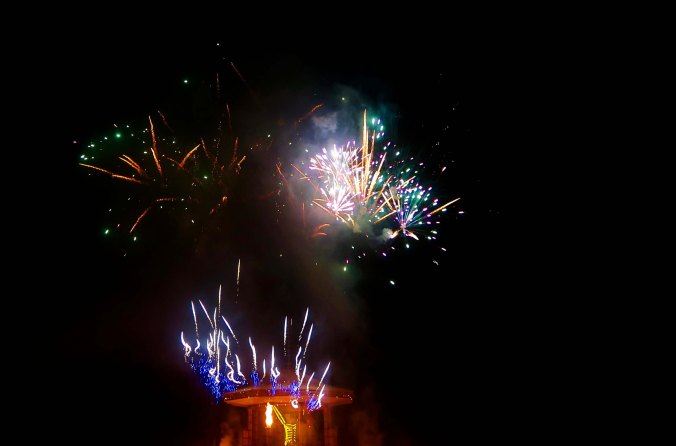 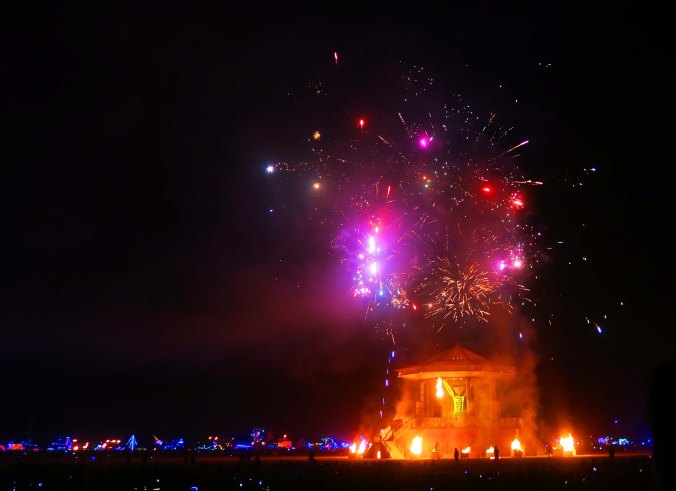 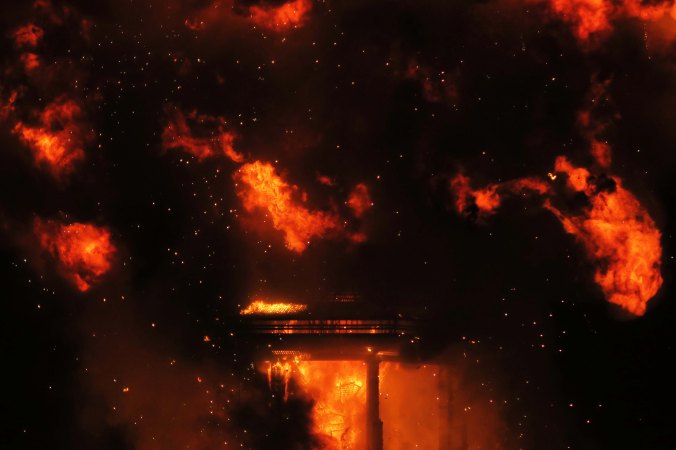 A large boom created this effect. 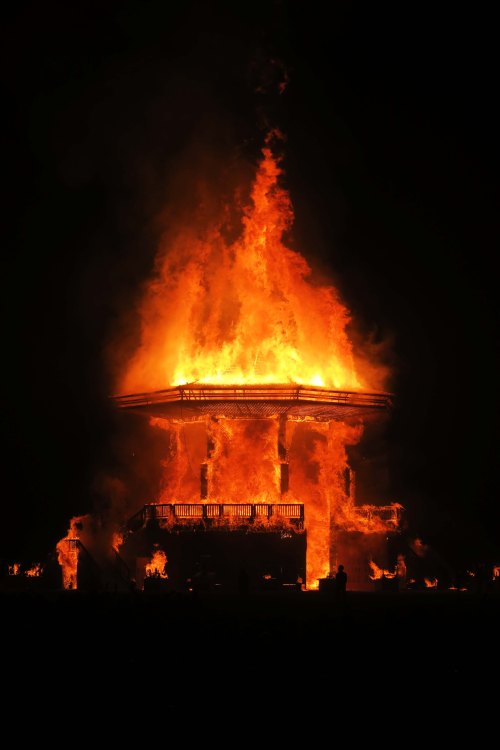 Before long, everything is engulfed in flame. 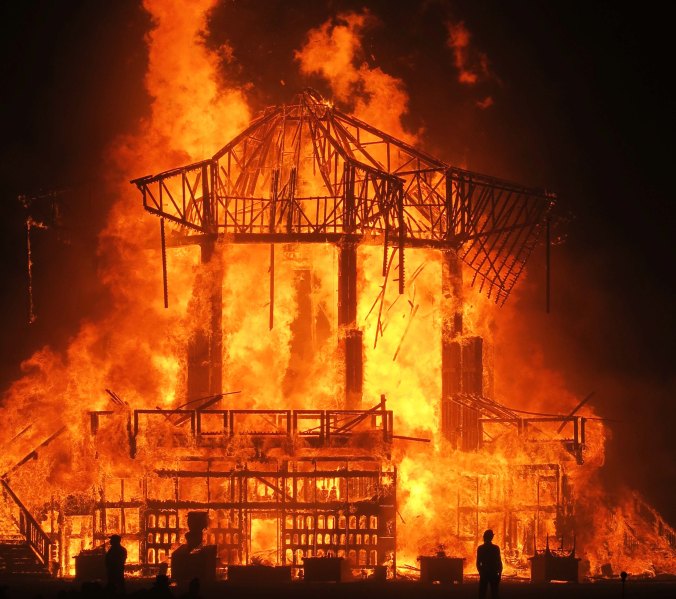 And then, only the structure remained with a vacant space where the Man once stood. It was time for me to leave.

I was back at camp being fed a feast by my new friends from Nevada City when someone came by and told us that a man had jumped into the fire, eluding officials who had tried to stop him. He died the next day at the UC Med Center in Sacramento. It saddened me; for the person, of course, but also for the people who had tried so hard to stop him, for his friends and family, for the thousands who were still at the burn, and for the event itself. I was ever so thankful I had left early.

I stayed through Sunday, attended the Temple burn, and was up by 3:30 on Monday morning making my way over the dusty, bumpy road out of Burning Man. It only took an hour. Another year was behind me. The sun lit the horizon over the desert as I drove the 60 miles between Gerlach and Interstate 80. Its beauty reminded me of how precious life is— and how privileged we are to be here and enjoy it. 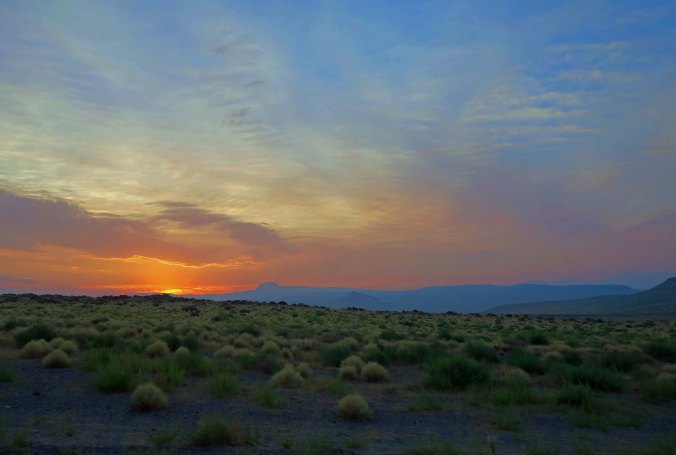 NEXT POST: In search of fall colors, I head to New England but find them at home. After that: A Halloween Extravaganza!