These larger-than-life pictographs at Sego Canyon in Utah are among the strangest I have ever seen. Now add in the fact that they are several thousand years old. And what’s with the pictograph on the right? Also, check out this guy’s spiky hairdo.

Zipping along Interstate 70 in Utah, you might very well decide to take a detour and visit Arches and Canyonlands National Parks. It is a decision you will never regret. The odds are, however, that you will miss the small road that extends north of the Arches turnoff heading toward the town of Thompson Springs. In so doing so, you will miss the opportunity to visit one of the most magical and mysterious rock art sites in the Western United States: Sego Canyon.

Our van sits in Sego Canon as Peggy and I wander around looking for rock art. Most of it is located on the two rock faces below. Peggy watches as I work my way up closer to the petroglyphs. 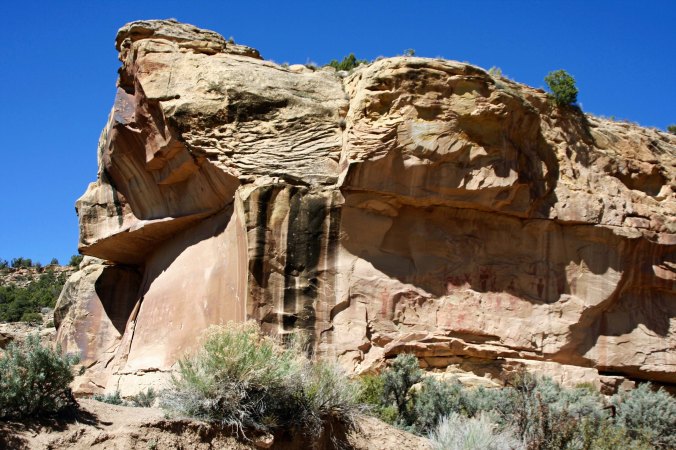 Most of the rock art at Sego Canyon is found on the two faces of this large rock.

This is another rock face that Peggy and I checked for petroglyphs in Sego Canyon. We didn’t find any rock art but the rock itself was quite unusual. I could see why Native Americans might have considered the area sacred.

Three different historical periods are represented in the rock art here dating back over a period of 6,000 years. The most fascinating to me are the pictographs left behind during the Archaic period by nomads who roamed the area from 8,000 to 2,000 years ago. The large, anthropomorphic forms that are painted on the rock normally lack eyes, arms and legs but may come with antennae, snakes and earrings. Known as the Barrier Canyon Style, it’s hard not to think of these pictographs as alien, or at least imagine a shaman encountering these creatures on a drug induced journey into an alien world.

Dave Kingsbury, one of my followers from England, and I were discussing cults where people run around with rattlesnakes in their hands. We both agreed that such sport wasn’t for us. This horned pictograph from the Archaic period seems to have a thing for snakes. Possibly he belonged to such a cult. Or possibly he was a very powerful shaman.

Or maybe something else. I see this and I want to say, “Take me to your leader.” 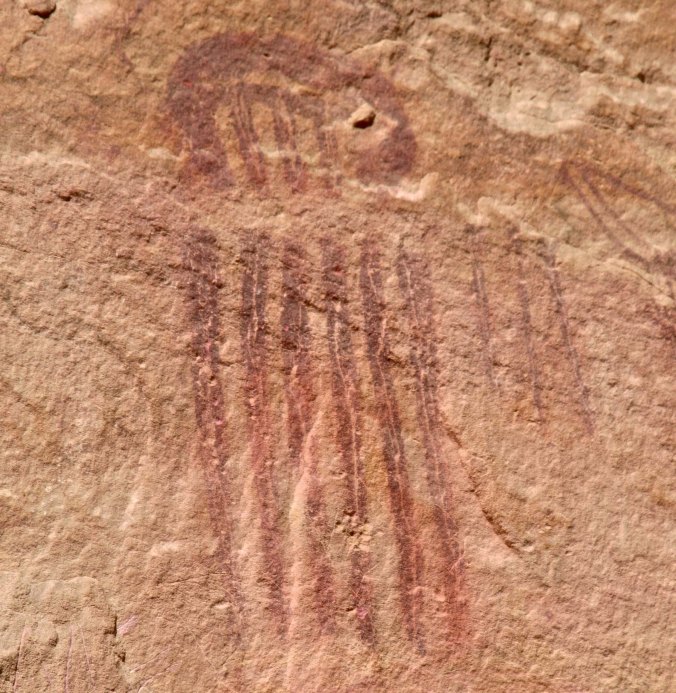 I find these jellyfish-like pictographs even more mysterious than the anthropomorphs. UFO fans might describe it as a space ship taking off, but hey, maybe it is a jellyfish. Or likely something else.

This shot provides a view of how some of the pictographs fit together on the right side of snake man.

And to the left..

And now, all together.

A final shot from the Archaic period. I found these pictographs a bit ghostly.

The Fremont Culture took over from the Archaic period and lasted from  600 CE to 1200 CE. Unlike the nomadic Archaic peoples, the natives of the Fremont period grew corn, lived in permanent stone buildings, and had a complex social structure. Most of the rock art they left behind is in petroglyph form, pecked into rather than painted on the rock. 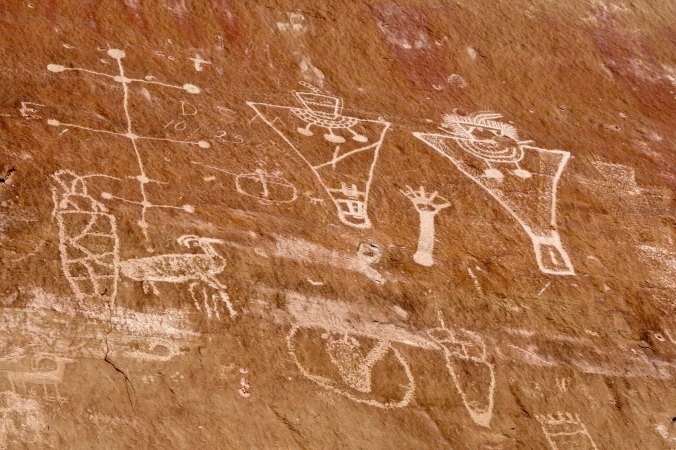 The Fremont era had its own strange figures, but these were loaded down with jewelry. I found the hand interesting. I wonder if it is holding Datura seeds. It looks a bit like a foot walking in the circle. And there is a Big Horn sheep. It is rare to find petroglyph sites in the west that don’t include them. 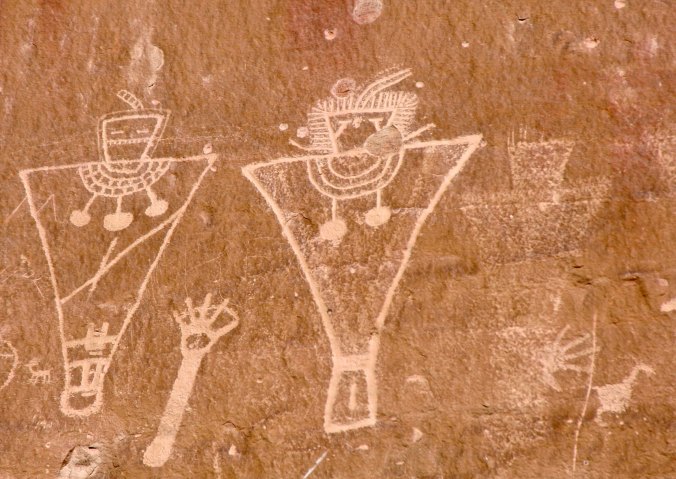 A close up of the two figures with another ghostly one to the right. There is also another hand and another sheep, a fat fellow. The tiny figure on the left looks more like a deer to me.

And finally, we have the more modern Ute Culture that populated the area from 1300 to 1880 CE, when the Utes were forced out of their homes and onto Indian Reservations so pioneers could grab their land. One way to distinguish petroglyphs from this period is the presence of horses, which the Spaniards brought to North America in the Sixteenth Century. In fact, horses are a major tool used in  dating rock art.

This Ute rock art featured what is thought to be a shield. I’d say that the horse is about to become horse meat.  But wait, is that a small man on the back of the horse? Maybe he is the enemy. 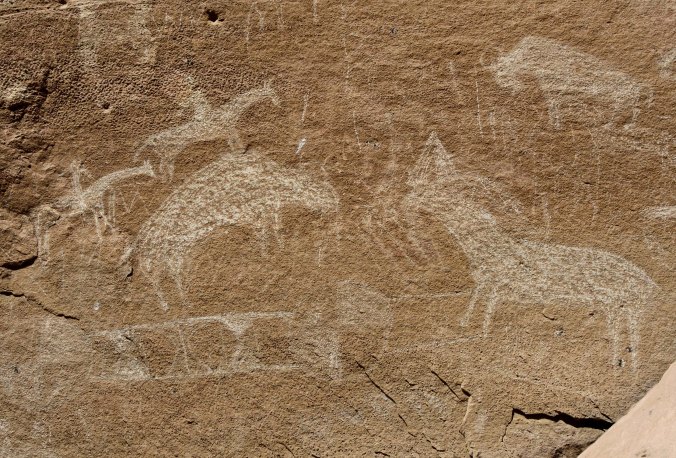 Ute Indians seem to hunt buffalo in this scene, which will be my last for Sego Canyon. If you ever find yourself in the area, don’t miss the opportunity to explore this fascinating  site.

Next Post: I am still out backpacking but will try to get a post up on petroglyphs Peggy and I have photographed in Arches and Canyonlands National Parks during my next break between trips.