Putting a pack on my back makes me happy. It means I am heading out for another wilderness adventure. This gorgeous Incense Cedar graced my camp and became the subject of many photos. Incense Cedars are normally found around the 4-5 thousand foot level in the northern Sierras.

I’ve been out on a solo backpack trip this past week at the 5000-foot level in the Sierra Nevada Mountains north of Interstate 80, about half way between Sacramento and Reno. Peggy drove me up from Sacramento where she was spending time with her 96-year-old mother.

I first started backpacking 48 years ago. Peggy caught this photo as I was prepared to head out on last Sunday.

It was time. Peggy took out her camera for a couple of photos, I shouldered my backpack, waved goodbye, and headed down the jeep road that led to Eagle Lakes. Since it was Sunday, most of the four-wheel enthusiasts were coming out, joyously running their vehicles up and over treacherous rock piles and though waist-deep mud holes. It’s not my thing, but I admire the people who are passionate about the sport. I was raised in El Dorado County, California, home to the granddaddy of all four-wheeling events, the Jeepers Jamboree. Mark Smith created the event in 1953 and it is still going strong.

Does this look like a road to you? It’s the type of challenge that gets a four-wheeler’s heart racing— one they dream of and are long after telling tales about.

I placed my trekking pole on the road to provide a perspective. Yes, jeepers drive over this! As for the dark stain you see, think oil pan…

A series of four-wheel clubs help maintain this road and the camping areas. Most of these groups have a fairly strong wilderness ethic. I thought that the Madhatters was the most entertaining name.

They even carry out their poop!

My goal wasn’t to hike the jeep road, however. It was to hike beyond the jeep road and beyond the numerous four-wheelers who were out for a weekend drive or camping trip. Actually, it wasn’t hard. All I needed to do was to travel a couple of miles past where the jeep road ended. Whereas, four-wheeling isn’t my sport, hiking and backpacking aren’t sports for most four-wheelers. I found a delightful spot and only saw four people while I was there: two hikers and two mountain bikers. One of the hikers, a good Christian fellow, even stopped to bless me… and Peggy… and our children… and our grandchildren… and any pets we happened to own. I was beginning to wonder if he would ever stop, but finally, he ran out of breath. I quickly thanked him and he happily went on his way— his job done.

I didn’t travel particularly far, but it was an adventure for me. I wanted to see how my ‘senior’ body would handle the trip. I’ve been backpacking for 48 years and have several thousand trail miles behind me from the tundra to the tropics, so it isn’t like I’m inexperienced. Mentally, I was ready to go. More than ready. But would the knees, and the hips, and the back, and miscellaneous other body parts agree? Well, I am here to report that they whined a bit. In fact, they whined a lot. They always do on the first outing of the year. But they also knew that whining alone wouldn’t get them back to the easy chair they love so much. I hiked along at 2 to 2 ½ miles per hour, which is a good pace for backpacking in the mountains, and eventually, they shut up.

I was one tired puppy when I found a place to camp, however. I unpacked, set up my kitchen, cooked my gourmet dinner (i.e. boiled water and poured it onto freeze-dried food), put up my tent, and anxiously waited for the sun to go down. I was ready to climb into my sleeping bag. Unfortunately, the longest day in the year (for those of us who live north of the Equator) was only a day away, and the sun didn’t want to cooperate. It lingered until 9:00. There was ample time for the ants, and flies, and mosquitoes, and several other biting bugs to enjoy the fortuitous feast that had arrived in their tiny corner of the universe. And feast they did, apparently giving me an allergic reaction. I sneezed and sneezed and sneezed and sneezed. My nose ran so fast that I had to put on my running shoes to catch up. I was still sneezing when the sun miraculously went down and I crawled into my tent, removing three large ants who had missed out on dinner.

I amused myself while waiting for the sun to set by wandering around taking photos. This was the pond I camped next to.

Lily pads came close to covering the water. This shot reminded me of the work done by the Impressionist painters. Monet would have had his brush out.

Old Man Mountain loomed above me, a reminder that much of the Sierra Nevada Mountain Range is composed of granite.

This was my view looking up when I arrived and cooked dinner.

The same view later. It was just about bed time!

I walked out to check out the sunset…

And enjoyed the reflection in the pond.

There was no climbing into my sleeping bag, however. It was too damned hot. When Peggy and I had left Sacramento for our 60-mile drive into the mountains, the thermometer was pushing 109 degrees. It was cooler in the Sierras, but still in the 90s. Hiking in the heat was part of the reason I was so bushed. And now, along with the incessant sneezing, it was keeping me awake. I laid there in my altogether on top of my Therm-a-Rest mattress, took an antihistamine, and waited. Finally, things calmed and cooled down. I began to doze off. That’s when the other shoe dropped. The thousand frogs (slight exaggeration) that lived in the shallow lake next to where I was camping began to croak, all at once. I’d just managed to tune them out when the Goatsucker flew over.

Goatsucker? Was I beginning to lose it? Not exactly. For those of you who aren’t card carrying members of the Audubon Society, goatsuckers are members of a fairly large, noisy family of night birds. Whip-poor-wills are an example. My particular nemesis wasn’t a Whip-poor-will with its mournful all-night jabber, though, it was a Nighthawk, who had his own unique way of making noise. You can tell they are in the neighborhood when you hear their distinct “peent, peent” calls, but that’s only the beginning. In order to win their lady-love’s favor, the males climb high into the sky, close their wings and dive bomb the objects of their affection. Just as they reach the females, they open their wings. The wind rushing through their primary feathers makes a loud bloop sound. The bigger the boy, the louder the bloop. Apparently, it turns the girls on.

As to how the family obtained the name goatsucker, there’s an interesting story that goes way back in time to Europe. It starts with the fact that the birds have tiny beaks that open up to huge mouths they use for catching insects. In Europe, they liked to hang about around smelly goats at night that attracted lots of bugs. But the Europeans believed that the birds had a more nefarious purpose in mind. They believed that they were using their large mouths to grab hold of the nanny goats’ teats and suck them dry. Here’s what Pliny, the Roman Elder, had to say about them in 71 CE. (1601 CE interpretation.)

The Caprimulgi (so called of milking goats) are like the bigger kind of Owsels. They bee night-theeves; for all the day long they see not. Their manner is to come into the goat-pens, and to the goats udders presently they goe, and suck the milke at their teats. And looke what udder is so milked, it giveth no more milke, but misliketh and falleth away afterwards, and the goats become blind withall.

They were bad birds indeed. Not only did they steal nanny’s milk; her teats fell off and she went blind as well. Anyway, with this thought in mind I eventually fell asleep to the sounds of nature: croak, croak, peent, peent, BLOOP! 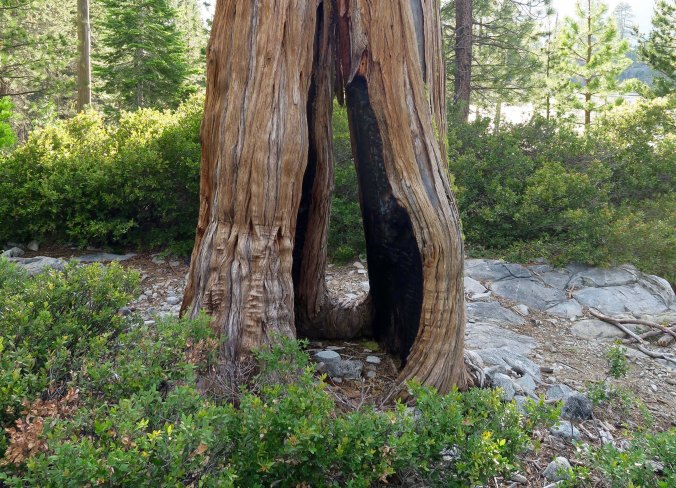 In my walk-about after dinner, I discovered that the Incense Cedar I featured at the top of the post was actually two trees. Fire, possibly set by lightning, had burned out the space between the twins.

I shot up the trunks for a different perspective.

I’ll conclude today’s post with a picture of the twin cedars being caught in the early morning sun the next day.

36 thoughts on “Goatsuckers in the Night… Let’s Go Backpacking! Part 1”