The Man at Burning Man burns in 2012. A few remaining fireworks fall from the sky.

One of the first things I do at Burning Man each year is head out to the Playa to visit the Man. It’s a way of paying homage. Given that the annual event in the Black Rock Desert of Nevada wouldn’t exist without the Man and his appointment with fire, my ‘pilgrimage’ seems appropriate. Here’s what I wrote a few years back on Burning Man’s beginnings in San Francisco:

A striking sight of the Golden Gate Bridge dominates the view from Baker Beach in San Francisco. It’s a romantic spot, a popular place to get married. Folks also get naked; it’s a nude beach. It was here that Larry Harvey and his friend Jerry James decided to host a bonfire in honor of the summer solstice in 1986. As to why they chose a nine-foot wooden effigy of a man (and his dog) to burn, Harvey remains mysteriously mum. Whatever the reason, it was out of the flames that Burning Man was born. Larry and his friends had such a great time they vowed to come back the next year with a bigger Man.

By 1990 the Man had grown to 40 feet tall and word of mouth had guaranteed that a sizable crowd was present for the solstice bonfire on Baker Beach. It wasn’t to be. Golden Gate Park police had decided that burning the Man posed a fire hazard to the Park and City. A single Park Ranger rolled in on a motorbike and said no go. You can’t be too careful, right? Fires were raging across Southern California.

The Man was taken apart and returned to the vacant lot he called home. The people who had come to watch the burn were angry. This might have marked the end of Burning Man, except for a bit of synchronicity. The Man had caught the attention of a group in San Francisco known as the Cacophony Society, an organization that specialized in outrageous pranks and strange outings known as zone trips. Several of its members, including co-founder John Law, suggested to Larry that the place to burn the Man was in the remote Black Rock Desert of Northern Nevada. It would make an ideal zone trip— far out in the language of the 60’s. A Ryder Truck was rented for the Labor Day weekend and stuffed with the man plus personal gear. Cars were loaded with people and some 80-100 Burners headed off into the desert. A tradition was born.

Today’s Burning Man is tame in comparison to the early years on the Playa. In the beginning, people camped wherever and drove when, where, and as fast as they wanted. Admission was free, open to anyone who wanted to make the drive up (primarily people from the Bay Area). At times, the event took on the guise of a shooting gallery. Running in and out of fire became a sport, particularly popular to those who were drunk or drugged out of their minds. Once again, Burning Man could have easily ended, but Larry and the others who founded the event had a broader vision and the event evolved, instead. By the late 90s, rules had been developed to make the event safer. Elements of its art, environmental, social and spiritual culture had begun to develop. When I first arrived in 2004, Burning Man had more or less become the event it is now, minus 35,000 people.

This year, 32 years after the first Man first burned on Baker Beach, some 70,000 people from the US and around the world will make the journey into the desert for the week-plus of craziness starting on August 27th and ending September 3. On Saturday evening, September 2, most of these Burners will make their way out onto the Playa and form a huge circle around the Man. The majority will either walk or bike, but many will also journey out in mutant vehicles that form their own large circle where they blast out music and fire. As night settles in, hundreds of fire dancers will perform their fiery art in the center of the circle followed by a solemn procession to set the man on fire, which also kicks off a massive fireworks display. Sometimes the Man burns quickly as he has been prepped to do, other times it seems to go on and on. Regardless, almost everyone stays until the sculpture comes crashing down, creating one of those moments of silence, which is so rare at Burning Man, followed by a very loud celebration.

It’s impossible to get the full sense of the event without being there, but photos help. I will start with several pictures I have taken of the Man over the years and then move on to the burn. 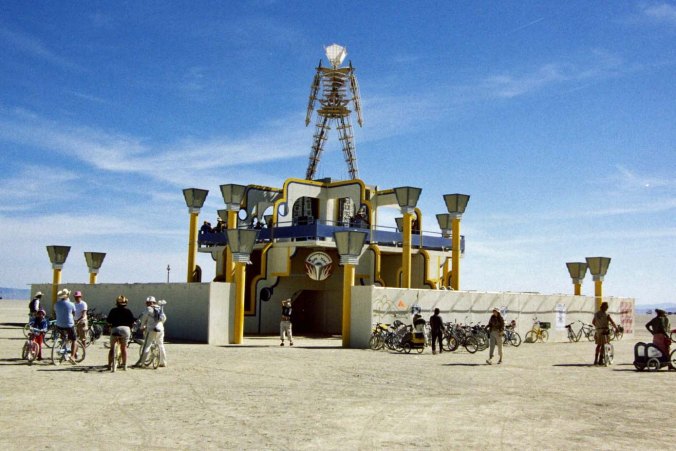 The Man begins his week located at the center of the Playa. While his look remains more or less the same, his base changes each year depending on the theme for the year. I took this photo in 2006.

In 2007, the Man burned twice— the first time in the early hours of the morning by a rogue Burner. I had actually missed the act of vandalism by only a half hour. Note the Phoenix on the face, like the mythological bird, he was able to rise again.

BMORG, the Burning Man organization was able to put together another Man in San Francisco and get him back to the desert in time for his Saturday burn. Here, he is being placed on his pedestal, still headless. (Photo by our friend Ken Lake.)

One of my favorite bases was this one from 2009.

In 2010, the Man came with gargoyles, like a European cathedral. In this photo they are still working on the base. It isn’t unusual for finishing touches to be added at the beginning of the week. The steps up to the fourth level provided Burners with an opportunity to look out over Black Rock City, the Playa and the surrounding mountains.

One of the gargoyles I photographed when I reached the top.

Three main roads lead out from Black Rock City to the Man. This one was from Center Camp. Lanterns are hung from the poles at night. The 2012 base was one of the largest.

What the structure inside the base of the 2012 Man looked like. No nails were used in putting it together.

A flying saucer provided the base in 2013.

The Man’s head had been altered to have an alien appearance..

The man was fleshed out, so to speak, in 2014. The Temple, lit up by the sun, can be seen through the Man’s legs. Each year, Center Camp, the Man and the Temple are lined up. 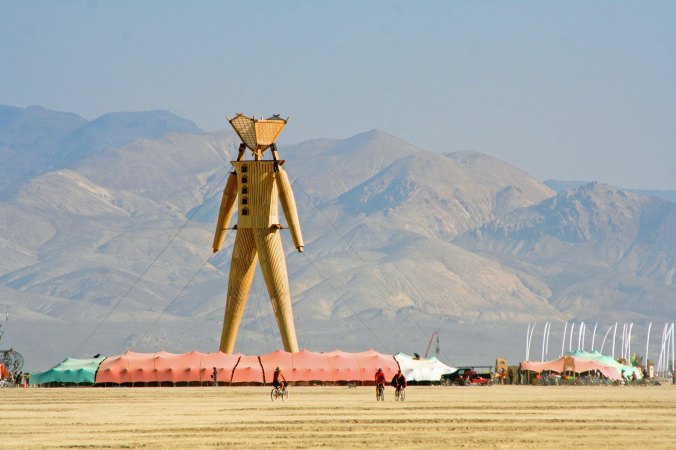 Part of Burning Man’s appeal is the magnificent mountains of the Black Rock Desert that surround the event. 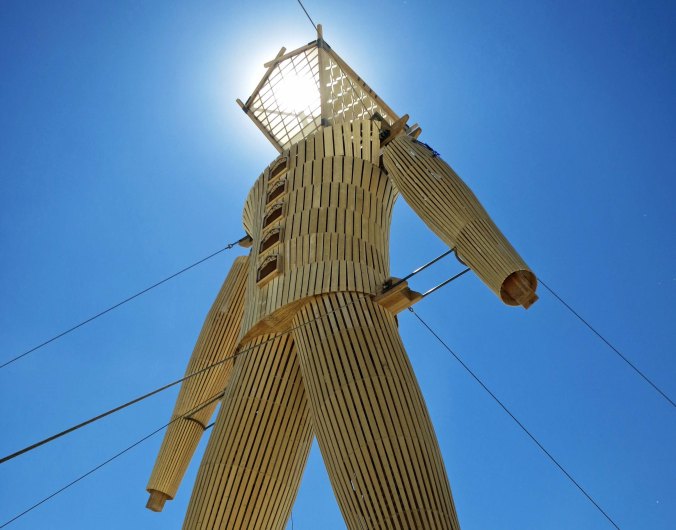 The 2015 Man was perched on top of a maze covered with side-show circus posters reflecting the year’s theme.

And now we come to the 2015 Man being prepped for Burn Night. It’s Saturday. The art work has been removed and the firewood piled high. Entrance into the area has been closed off.

On burn night almost everyone in Black Rock City gathers around the Man. The Man on top of its flying saucer base in 2013 is looking even more ET-like. Lighting has been added to help create the effect.

Fireworks and arms raised means the Man is about to burn!

This shot of the base of the 2012 Man captured the intensity of the fire well. You can almost feel the heat!

The Man is standing on his ‘last legs’ here. He and his flying saucer teeter on the edge of falling into the fire.

The morning after: Burners use glowing embers from the night’s Burn to roast a lamb. Life goes on. The Man will rise again the next year.

This completes my series on Burning Man for now. I may do a couple more posts before I head off to Black Rock City again on August 26. In September and October I’ll post the results of my 2017 adventure!

Big Sur with its iconic bridges, beautiful coastline, and a bit of history.

I encounter a 70s terrorist group in the Sierra Nevada Mountains.

A new series: The fascinating, ancient rock art of the Western United States.