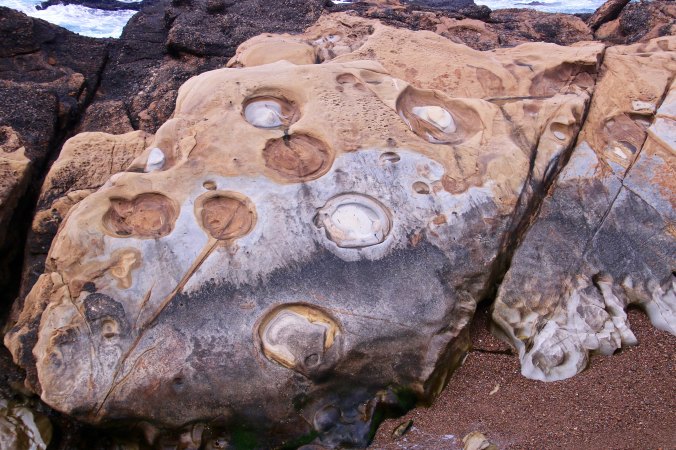 This sandstone  at Pt. Lobos has worn away to expose the concretions that were created in it millions of years ago. It gets my vote as a really weird rock.

I’ve become used to the idea that concretions can lead to some strange rocks. Several years ago, for example, Peggy and I had wandered about as far south on the Southern Island of New Zealand as you can go and had come across the rocks shown below. Bone, who is about four inches tall, perched on top of the rocks to provide perspective. These large boulders, known as the Moeraki Boulders, are concretions formed from Paleocene mudstone.

Peggy and I found this mudstone concretion in New Zealand on a South Island beach. Bone, who likes strange things, provides perspective.

Another of the New Zealand concretions and Bone.

Up until I found the sandstone concretions on Pt. Lobos three weeks ago, I was sure that New Zealand would win the prize for really weird rocks. Now I am not so sure. For some murky reason, according to geologists, these concretions form as lumps in sand and grow in concentric rings cemented together as the sand turns to rock. The weathering of the rocks at Pt. Lobos exposes a cross-section of the concretion, which is what you see in the photo at the top of the post. Like the rocks in New Zealand, I found them almost alien.

The concretions are found on the South Shore of Pt. Lobos, which is considerably different from the North Shore that I featured in my last blog on California’s Central Coast. Sedimentary rocks of the Carmelo formation replace the granitic rocks and the terrain is more accommodating to roads and parking lots. Consequently, there are a lot more visitors. While I had mainly hiked alone before, a number of people now joined me along the trail. I preferred the ‘splendid isolation,’ but my hiking companions in no way detracted from the beauty of the area.

Carmelo sandstone on the South Beach of Pt. Lobos replaces the granitic rocks on the North Shore. Like the granite, it is moving northward along the San Andreas Fault. This rock has been folded upward by geological forces. The distant land is part of Big Sur.

I found this large chunk of sandstone attractive.

The Sea Lion Trail along the South Beach included a face. The pebbly rock is a form of conglomerate. Cormorants gather down on the point.

Looking down into one of the coves along South Beach.

As might be expected, given that it was spring, the trail around Pt. Lobos was filled with flowers. Having ‘borrowed’ Peggy’s camera since she was playing grandmother in North Carolina, I was able to get up close and personal with several of them. 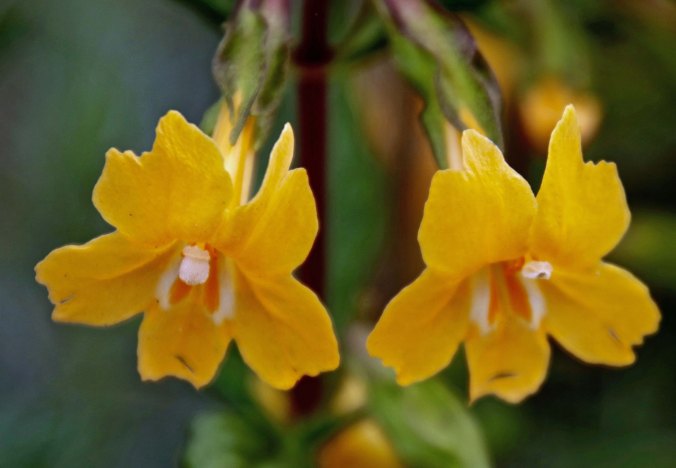 Miner’s Lettuce. It goes great in a salad, as the early 49ers discovered. 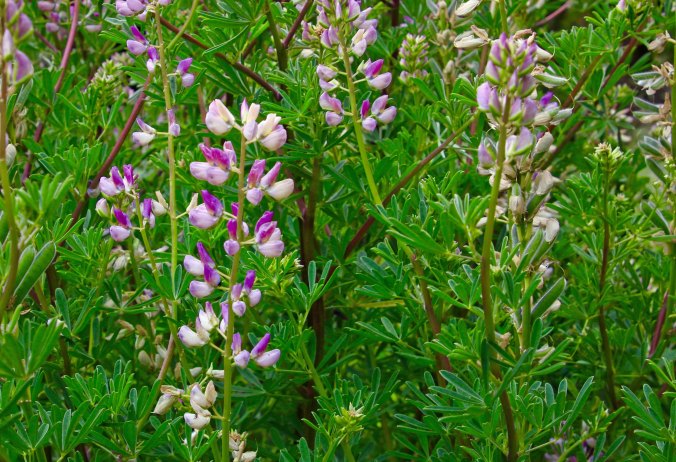 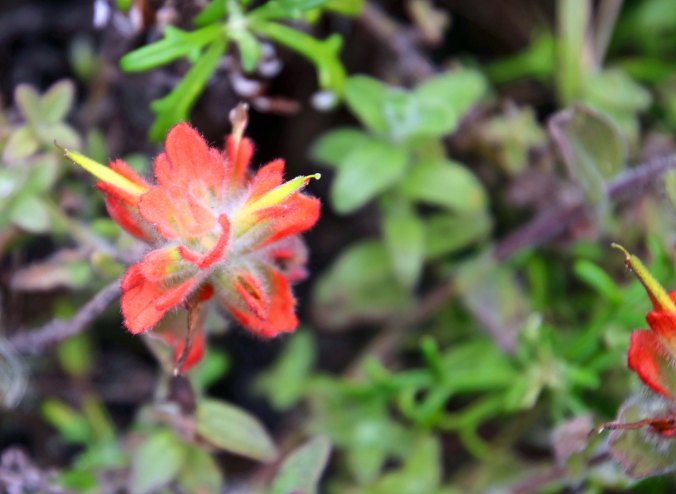 And a rose, by any other name, is still a rose— even a wild rose.

My final view of the ocean from Pt. Lobos was looking south at the Big Sur Coastline, which is where we will travel next on my posts about the Central California Coast. The buildings you see on the left are located in Carmel Highlands. I once stood on one of the rocky outcrops and watched a whale breach just off the shore. The Highlands Inn, a fine old hotel hidden up in the trees, offers fine views of the ocean. I’ve eaten in the restaurant a few times but never stayed there. I could fly to Europe for the cost of a one night stay: $600 to $900. I said goodbye to the coast and hiked back toward the entrance station. Along the way, I met a tree that belonged in Tolkien’s Fangorn Forest. It leaned over the trail and watched me as I passed. 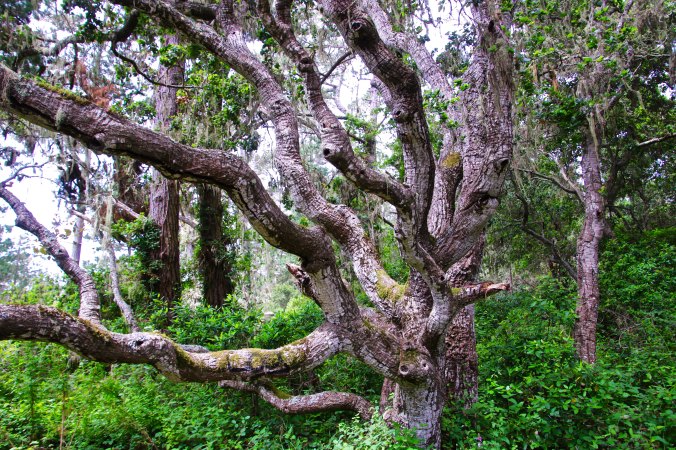 I thought these tree limbs were reaching out to grab me. And then I noticed the eyes. I looked around hoping to find Treebeard. 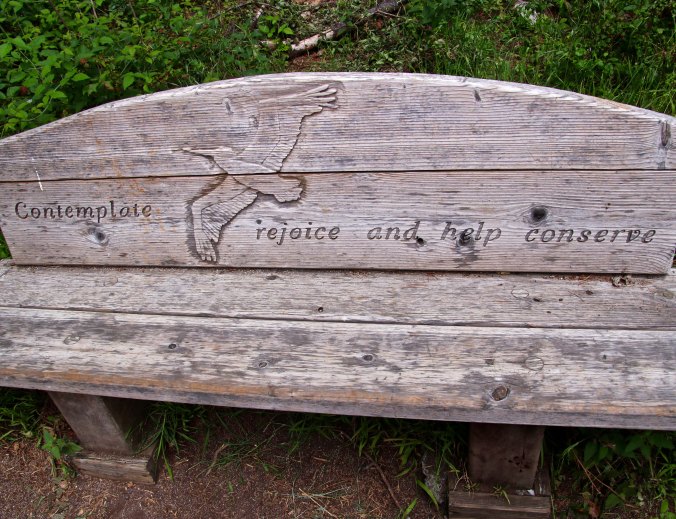 Instead I found this bench with its carving of a Pelican and important reminder. I thought it was an appropriate ending to my hike through Pt. Lobos Nature Preserve.

Next Posts: Lost in a snow storm, Big Sur, and the Man at Burning Man.

Special Note: For those of you who follow Bone’s wandering ways, he has traveled up to northern Oregon and will be out having adventures with Crystal Truelove at Conscious Engagement. Not sure all of what he will be involved in (you never know with Bone), but I think he will be attending a gathering of Cherokees. Last I saw of him he was perched on a beehive at Crystals.