George, the Bush Devil from my book, “The Bush Devil Ate Sam,” checks out Bone. NO, George, Bone is not edible!

This is the third and final post on how Bone was discovered. In last Wednesday’s post my fellow backpackers and I had ended up at the resort on Echo Lake after coming out of the Desolation Wilderness. We had celebrated the first part of our journey with lunch and a beer or three…

My system complained about the third beer as we hiked on across Highway 50 and up to Benwood Meadow where we stopped for the night, some 34 miles from where we had started.

Our fourth day started out as a typical backpack day: we climbed. It was gentle at first and then became more serious. Once again snow-covered large segments of the trail. We spread out and searched for tree blazes. I scrambled over a particularly steep section and found myself in a high meadow.

Something half buried in a field of young corn lilies caught my eye. A few days earlier it would have been covered with snow. Curiosity led me to detour through the still soggy ground. Mud sucked at my boots.  My treasure turned out to be a disappointing, short, squat bone. Gnaw marks suggested it had been part of someone’s feast. I was about to toss it when a devious thought popped into my mind.

“Trash,” I hollered at Tom and held up the bone. We had a game where if one person found a piece of trash, the other person had to carry it out. But first you had to catch the other person.

Tom sprinted down the trail with me in pursuit. Unfortunately, we had made it over the mountain and our route ranged from flat to downhill. Tom was very fast. We had traveled two miles and were almost to Showers Lake before he stopped, concerned about leaving our companions too far behind. Very reluctantly, he took the bone and stuffed it in his pack.

“How can you classify a bone as trash,” he whined. I figured Tom would toss his new traveling companion as soon as I was out of sight. 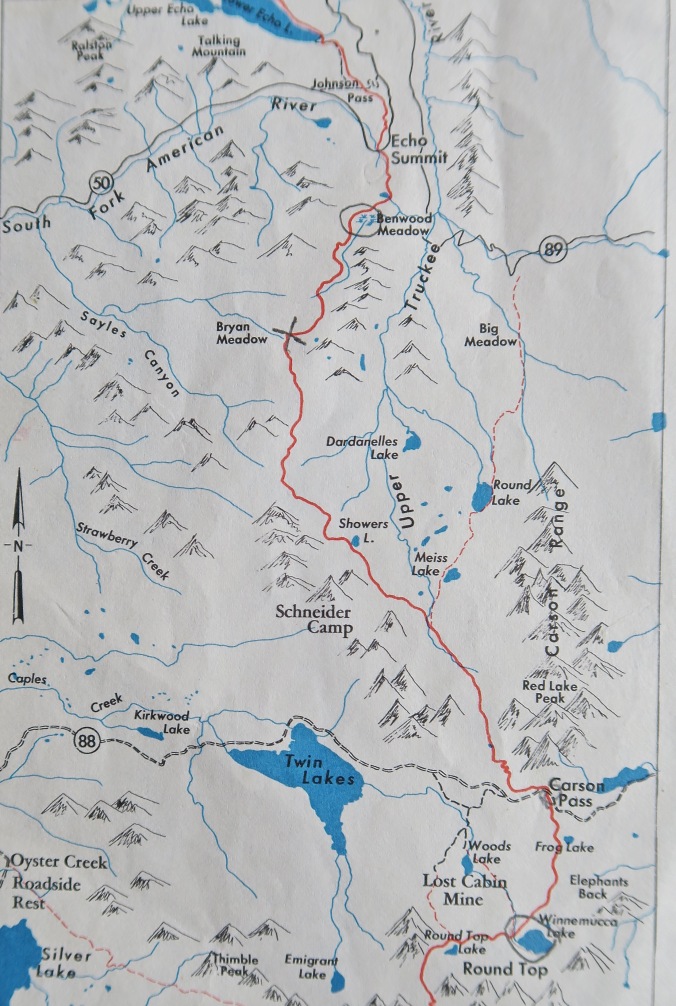 X marks the spot where Bone was found, resting in a high mountain meadow. (Map from the Tahoe-Yosemite Trail book by Thomas Winnett.)

It was a pleasant hike down to Carson Pass on Highway 88, and relatively dry since we were on a south-facing slope. Kit Carson had come through here in February of 1844 along with John C. Fremont. It wasn’t pleasant then. The snow was deep and food was limited. The mountain men ended up dining off of their horses, mules and the camp dog. The dog apparently went quite well with pea soup. Later, the trail they discovered would become a major entry point for the 49ers rushing west to find gold. (Eventually, the trail cut through Diamond Springs, the foothill town where I was raised.)

There was nary a bar, restaurant or gas station near the pass so we hiked on another three miles to Lake Winnemucca. Rain was threatening and I set up my tube tent, a large sheet of plastic shaped into a round tunnel. It wasn’t particularly sturdy, but it was light and dry. Tom, on the other hand, was carrying a luxurious three-season tent. He stacked the women in head to toe and ended up smelling April’s feet all night.

The next day was all downhill— down to Fourth of July Lake, down to Summit City Canyon, and down to Camp Irene on the Mokelumne River. After dropping 4000 feet in 14 miles I found myself bone-tired again.

Camp Irene provided an attractive campsite but turned out to be rattlesnake country. I had discovered the perfect toilet spot, dug my cat hole, and was baring my behind when one buzzed at me. It’s amazing how fast you can pull up your pants. I was lucky the snake didn’t bite me on the butt. I grabbed a stick and chased him away with a couple of sharp prods for good measure. He was lucky I was something of a nature boy. Otherwise he would have been smashed. The next time I did any serious bathroom duty was when I was parked on a flush toilet at Lake Alpine the next day.

Climbing out of Camp Irene is a challenge. The 4000 feet we dropped the day before in 14 miles we were now expected to re-climb in six. Low clouds filled the canyon. It wasn’t raining but it was cold and damp. Somewhere in the mist a male grouse made its familiar ‘whump, whump, whump’ sound, working to attract a female companion. I empathized. Dripping wet Buck Bush grabbed at our legs.

To stay warm and dry we broke out our rain gear. Lynn moved from being cold and miserable to shivering and not caring. She was on the edge of hypothermia, a very dangerous state. The body loses its ability to maintain warmth and the rational mind ceases to function. Coordination spirals downward. It is very easy to die.

Tom and I acted quickly. I fired up my Svea gas stove and Tom had Lynn stand over it wearing her cagoule, a dress like poncho. We positioned the stove carefully. While this wasn’t a solution to hypothermia found in survival guides, it worked. (The recommended solution is to break out your sleeping bag and crawl in naked with the victim.) Within minutes, Lynn was ready to tackle the rest of the mountain.

Hypothermia can strike fast but it can also be quickly cured— assuming of course you catch it in time. Tom was next. “Curt,” he called plaintively from off in the brush where he had gone to pee. I rushed over and begin laughing. He had managed the first half of his chore but couldn’t zip his pants up. His mind was working fine but his coordination had gone south. He was all thumbs. I called Lynn over to help as I returned to the trail chuckling. There are some chores a trek leader doesn’t need to handle.

We hiked the rest of the way into Alpine Lake without difficulty. Since our ride wasn’t coming until the next day, we rented a one-room cabin to share. Rain poured down outside as we relived our adventures and made up tall tales way into the night. Our journey was winding down, but it wasn’t over.

I was shaking the dirt out of my pack at home when the bone fell out. Apparently, I had been carrying it all the way from Winnemucca Lake. “Darn Lovering,” I thought to myself, “I am going to get even.” I decided to keep the bone. There would be an opportunity on a future trip to slip it back into Tom’s pack. I would have revenge!

And that’s it, the story of Bone’s discovery. It started like so many things in our lives often do, as a non-event. Bone didn’t come up as a subject during our night in the cabin. Naked jumping ladies, lost trails, swollen rivers, gorgeous country, rattle snakes, the physical challenge, hypothermia and even the upside-down map were the stories of legend, not a small, insignificant bone that came from who knows what.

But time has the power to rewrite history. When Tom opened his suitcase in Japan at the beginning of a two-year exploration of Asia, Africa and Europe, he found a surprise, the bone. I had my revenge, and the bone became Bone. When I moved to Alaska and was unpacking my boxes, who should fall out but Bone. The tales goes on and on and on… 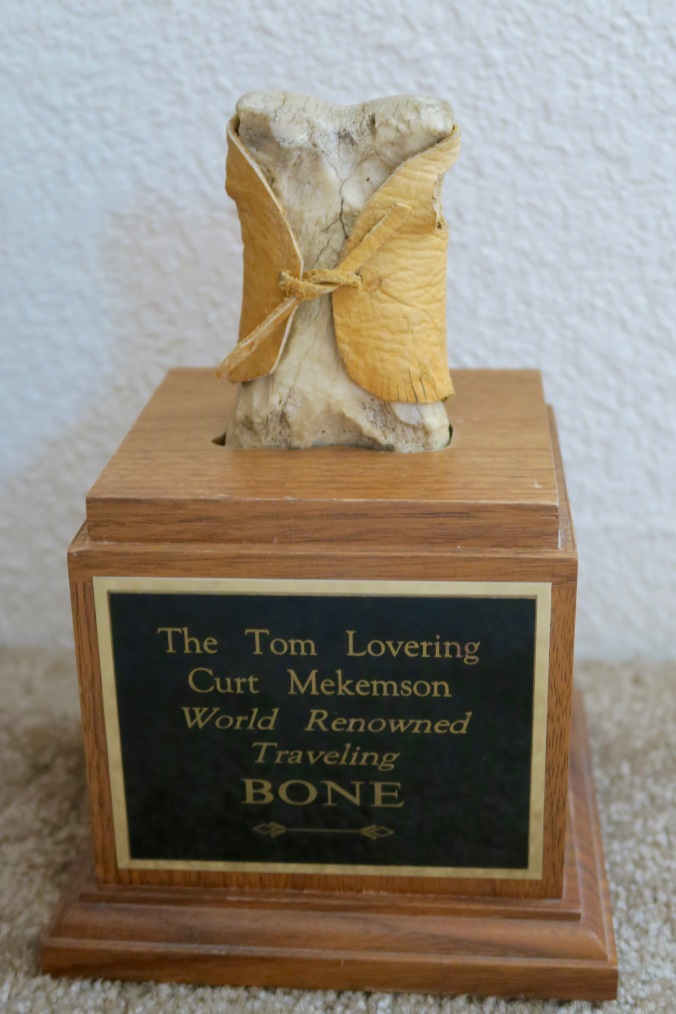 Bone on his pedestal.