The Heceta Head Lighthouse is one of the most photographed lighthouses in the US.

My older brother, Marshall, is visiting this week and it has taken us back in time, back to our childhood, a time with mixed reviews— and back to when Marshall was living in Oregon. I am going to skip over the early years here, but the Oregon time is relevant. First, however, a little on Marshall: He is a homeless man with a red cargo van and a healthy bank account.

I’ve mentioned our families wandering ways before. I think it is genetic. Both sides arrived in the US before it was the US and immediately started making their way west. Marshall likes to say if it weren’t for the Pacific Ocean, we still would be. For the past several years he has lived in the Southern United States and migrated with the weather, basking in the warmth of southern Florida in the winter and hiding out from the heat in the mountains of North Carolina during the summer. His rule is that he never camps in any one place for more than two weeks.

He takes great pride in his freedom, and in his ability to live inexpensively. For example, he always camps for free. He loves the outdoors and satisfies his love by camping in beautiful locations. He is also an avid reader, consuming a book every two days. I’ve never know him to be happier than he has been since he decided to become homeless in 2002 when he turned 61.

Three years ago, he discovered that he had throat and mouth cancer. He tackled it with a sense of humor his doctor couldn’t believe and continued to camp out while he had his treatments. Marshall has now been declared cancer free. He can continue roaming until he can’t any more. He decided to move west, however. He will now migrate between Arizona and Oregon. We will be one of his regular stop offs.

And this brings us back to Oregon and my post today on the Oregon Sea Lion Cave and the Heceta Head Lighthouse. In the late 1970s, Marshall and a partner bought an old motel on the Oregon coast about six miles north of Heceta Head and eight miles north of the Sea Lion Cave. It was a rambling, funky old place called Gull Haven. Professors from the University of Oregon, writers, and others needing an occasional escape could stay there for $10 per night. Marshall installed our 75-year-old dad there and he happily ran the place while he wandered up and down the coast— taking photos, painting landscapes, collecting rocks, and gathering mussels off the rocks to cook up and eat.

Gull Haven in 1979 when my brother owned it and my father managed it.

Naturally, I went up to visit. I was living in Sacramento at the time. Pop had tried to feed me mussels, no thanks, and showed me around the area. He had photographed the Heceta Lighthouse numerous times, and painted it once. I visited the Sea Lion Cave on my own, descending into the depths to the sounds and smells of a hundred or so sea lions. The sound was substantial and the smell… well, it was odoriferous. It isn’t one you forget, although I’ve since come to the conclusion that the sea-lion cave smells like a petunia patch in comparison to cattle feed lots in California’s Central Valley.

After a year or so Marshall sold the motel— cheap. And didn’t tell me he was going to. I never have totally forgiven him; I would have been sorely tempted to buy it. Today, it is a beautiful B&B known as Ocean Haven. Go here to check it out.

Gull Haven today. Or Ocean Haven as it is known now with its magnificent views of the Pacific Ocean.

I visited the area again a few weeks ago when Peggy was back East. Following are some photos I took of the Lighthouse and the Sea Lion Cave.

A distant view of the Heceta Lighthouse. It sits 205 feet above the sea.

The first order Fresnel Lens in the tower of 56-foot tall lighthouse shines a beam that is visible for 21 miles out in the ocean, making it the most powerful lighthouse on the Oregon coast.

This picture of the Fresnel Lens is found on the ground floor of the lighthouse. Our guide told us that when one of the bottom glass sections broke a few years ago, it cost as much to replace as the whole light cost originally.

When the lighthouse was automated in the 70s, it was turned over to Lane Community College for classes. Not bad, eh? Today it is a B&B. The house also comes with its own ghost named Rue. It is said that she doesn’t like change. 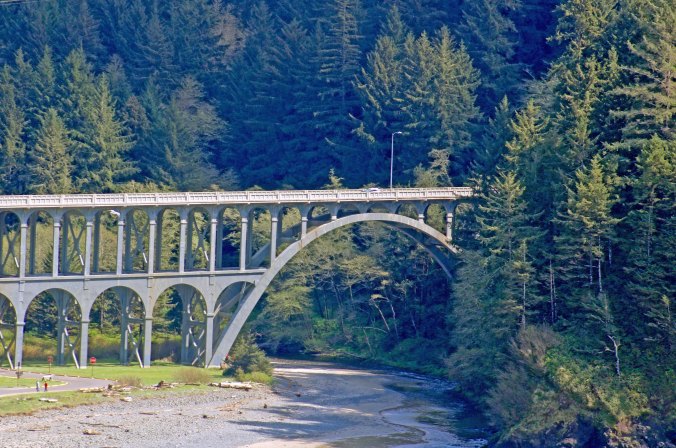 A view of the Cape Creek Bridge from the lighthouse.

And a close up. The Cape Creek Bridge is one of several gorgeous bridges along the Oregon coast.

The small bay created by Cape Creek is also quite scenic. The lighthouse sits on the hill to the right. 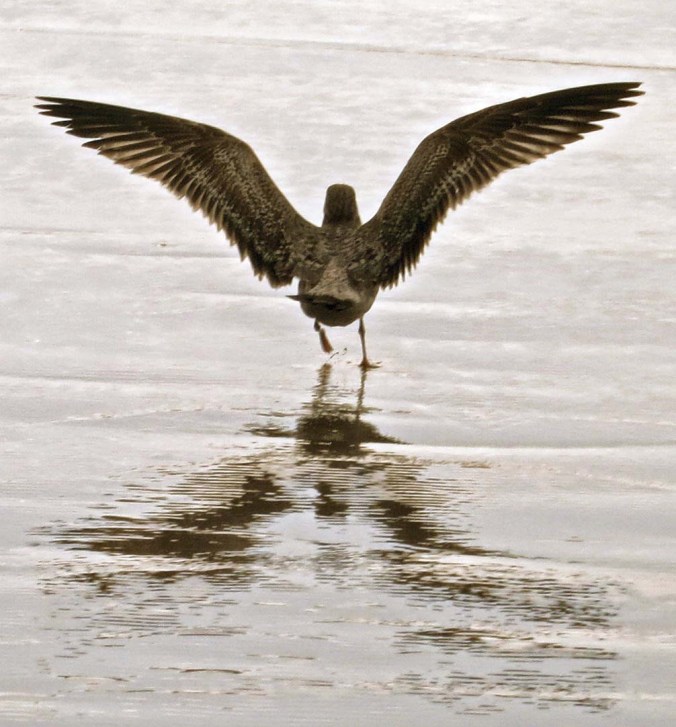 A sea-gull takes off from the beach of the Cape Creek Cove. I took this photo (and the two above) on an earlier trip.

A final view from the lighthouse. If you look closely, you will see the Sea Lion Caves building on the distant headland. Find the cut made for Highway 101 as it snakes its way along the cliffs and follow it to the far right. 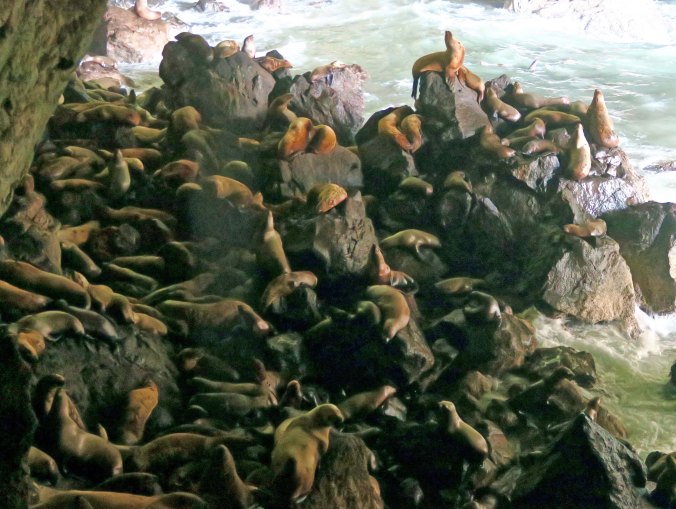 Over 100 sea lions (eared seals) were in the cave when I visited. An elevator whisks visitors down into the main cave. 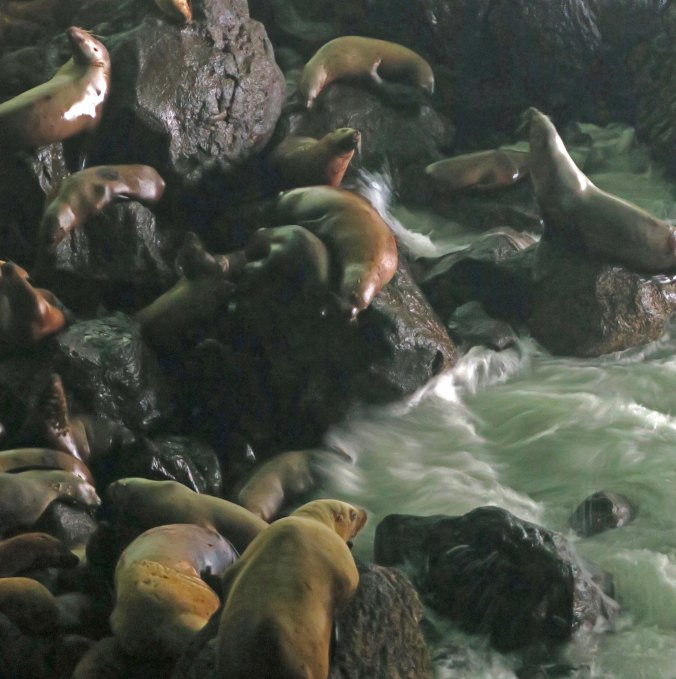 Steller Sea Lions live for about 20 years. They can swim up to 17 miles per hour. 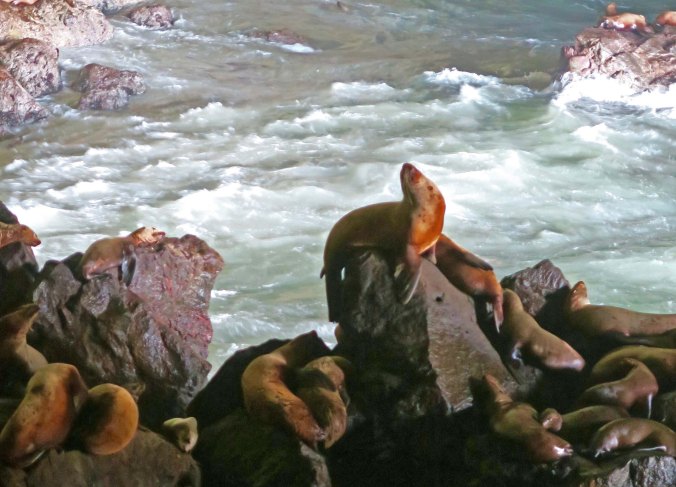 This big fellow had his head back and was barking most of the time I was in the cave.

I found the drama of the waves in the cave to be as interesting as the seals.

The rock in the middle is also prime seal territory. The waves actually washed over it as I watched, leaving only two sea lions on top. 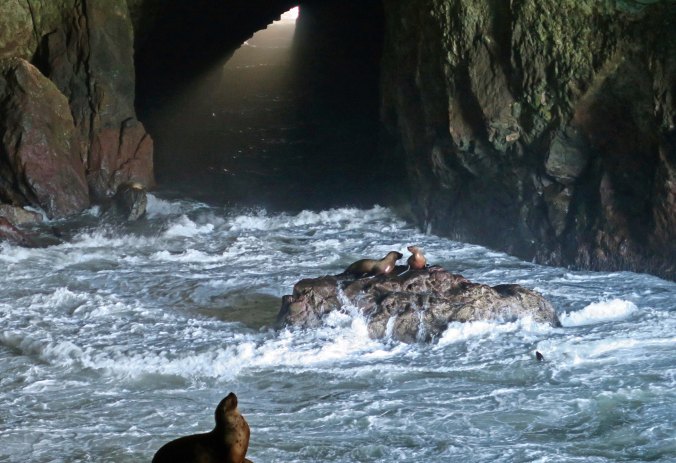 A final view of the rock with its two sea lions and the big guy.

Friday: The Tribes of Burning Man…

Next week I will be traveling down around Big Sur, Carmel, Monterey and Santa Cruz on the Central Coast of California. It may be blog-break time. 🙂