Airbus A 320, the airplane that Sully landed on the Hudson River, is on display at Carolinas Aviation Museum in Charlotte, North Carolina .

“You have to land poor Sully,” Peggy told me. And she was right. We had seen the plane he had been flying when we were visiting with our daughter and her family in North Carolina over Christmas.  A month ago, I had promised to do a post on the ill-fated flight. I was distracted. Ever since, I’ve left Sully circling in the air over New York City.

Passengers make a quick exit onto the wings, into the water, and onto a raft from US Airways Flight 1549 after its emergency landing on the Hudson River. (Photo from the Carolinas Aviation Museum.)

Peggy and I were visiting the Carolinas Aviation Museum in Charlotte, North Carolina to check out the Airbus A 320 that Captain Chesley Sullenberger had landed on the Hudson River when I heard, “Captain Sully, may I take your photo?” I looked around, excited that Sully was at the museum. I wanted to take his photo, too! A 30-something guy was making a beeline across the museum toward me. I glanced behind me; no one was there. By then, the man had reached me, beaming, his hand outstretched.

“It’s a privilege to meet you, Captain,” he declared while grabbing my hand.

“I am not Sully,” I laughed, “But you are welcome to take my photo.” He yanked out his iPhone and took a selfie of the two of us, which he immediately sent off to his brother in Texas. I walked over and studied a display that featured the captain. Yes, we both had white hair and a mustache.

On January 15, 2009, Sully, along with first-officer Jeffrey Skiles, left La Guardia Airport in New York on US Airways Flight 1549 on their way to Charlotte, North Carolina. Skiles was piloting the plane. One and one half minutes into the flight, a flock of Canadian Geese appeared, crashed into the airplane, and were sucked into the jet’s engines. Birds crashing into airplanes are nothing new; it’s been happening ever since man learned how to fly. In fact, the month I was born, Westinghouse engineers were firing dead chickens 200 mph at airplane windows to determine if the windows could withstand the impact. Splat!

“I could hear the thump and thud,” Sully said afterwards about the geese.

The impact was fatal for the geese. The ones sucked into the engines immediately became cooked geese, minced and over-done— airplane food, you might say. It could have been fatal for Sully and the other 154 people on Board Flight 1549 as well, had it not been for the extensive experience and quick thinking of Sully. Both jet engines lost power. Zero thrust was available to fly the plane. “May Day! May Day” Sully called to La Guardia. Preparations were made for an emergency landing at La Guardia and at Teterboro, another nearby airfield in New Jersey.  Runways were cleared and fire engines revved up. Sully took over flying the plane from Skiles. Skiles jumped into reading the four pages of the emergency flight manual on how to restart stalled engines.

The flight manual for Airbus A 320.

Sully did a quick mental calculation. Could he  get back safely to La Guardia or Teterboro? Forty years of experience, 20,000 hours of flying, and his official participation in a number of airplane crashes told him no. His plane was too low and his speed was too slow. Trying to get to either of the fields would lead to the Airbus crashing into one of the most densely populated areas of North America. In addition to the 155 people on board, several hundred other lives could be lost.

“We can’t do it … We’re going to land on the Hudson,” he told Skiles and the control tower at La Guardia. “Brace for impact,” he told the flight crew and passengers. The flight crew immediately began yelling in unison, “Brace for impact, heads down, stay down!” “Brace for impact, heads down, stay down!” over and over. As passengers prayed and cried and desperately tried to make last-minute phone calls, Sully aligned the plane with the Hudson River and barely missed the George Washington Bridge. Could he avoid hitting any boats on the river? Could he land at exactly the right angle to reduce the likelihood of the Airbus being torn apart or sent cartwheeling across the Hudson?

People who happened to be looking out the windows of tall skyscrapers along the Hudson watched in heart-stopping horror as the large plane flew by and headed for its fateful plunge into the icy Hudson.

A few seconds before impact, Scully straightened out the plane and pulled back on the rudder to achieve the correct angle for a water landing. And then, 208 seconds after the engines had lost power, the plane plunged into the Hudson and shot under the water, creating total darkness— before it popped back up onto the surface.

The plane was filling with water. Fast action by the crew, with cooperation from the passengers, got everyone out of the Airbus. Sully was the last to leave, desperately trying to make sure that no one was left behind. Nearby boats on the river sped to the rescue. All 155 people were rescued with only a few minor injuries. A hero was created; a legend was born. 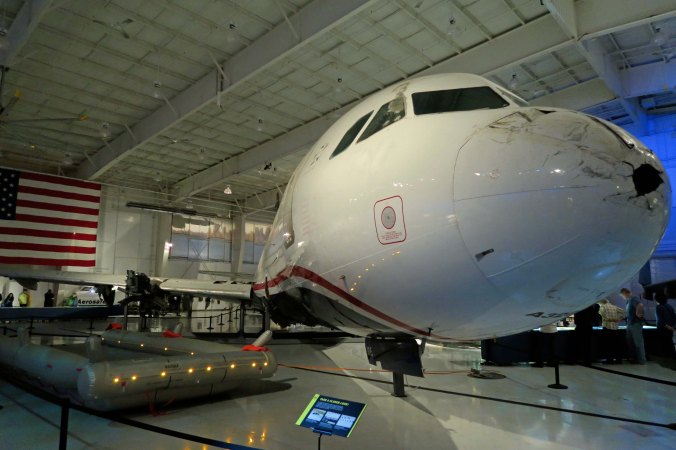 The right side of Airbus A 320 also including the raft that passengers escaped into.

A shot of the left side of Airbus 320 showing the damaged left engine.

A close up of the engine.

A final shot of passengers and crew waiting on the wings to be rescued. (Photo from the Carolinas Aviation Museum.)

If you haven’t already seen it, I highly recommend watching the movie “Sully” starring Tom Hanks as Sully and directed by Clint Eastwood.

Next Blog: It’s back to the Sierra Trek!

33 thoughts on ““Captain Sully, May I Take Your Photo?” … A Fateful Plunge into the Hudson River”