The thing about mutant vehicles is you never know what people are going to come up with, like this telephone: Off ‘Da Hook! Burning Man is an “Off ‘Da Hook” kind of place.

I could go on and on with mutant vehicles. Their sheer numbers and variety speak to the creativity and magic of Burning Man. But the camps, sculptures, temples, painting, costumes, performance art, the Man, and even bicycles also speak to the creativity, so I need to move on. Mainly, up until now, I have focused on vehicles that tend to stand out and draw crowds. Nothing is better at this than El Pulpo Mecanico.  There are dozens of other vehicles that also deserve attention that I haven’t covered yet, however. (And I wasn’t around in 2016 to see the latest creations!)

One mutant vehicle I haven’t featured yet, Never Was Haul, is right up there with El Pulpo Mecanico and the Rhino Redemption from my perspective. It’s here today, but there are also dragons and bugs and ships and animals and some really weird stuff. Oh my! Enjoy. (Unless noted otherwise, all of the photos are by Peggy and me.) 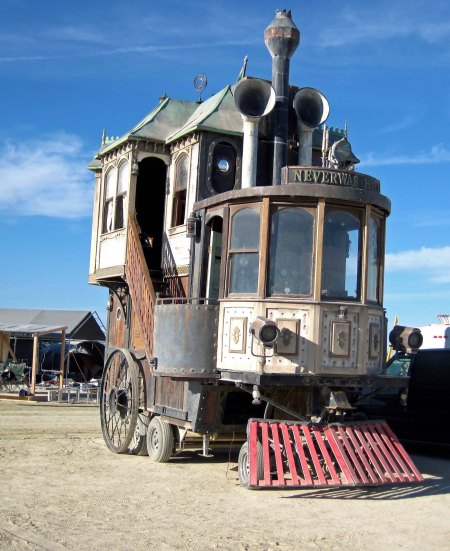 I selected this photo of Never Was Haul from my longtime friend Tom Lovering because it is one of his all-time favorite mutant vehicles. I would describe it as a combination of a steam train engine and a Victorian house. 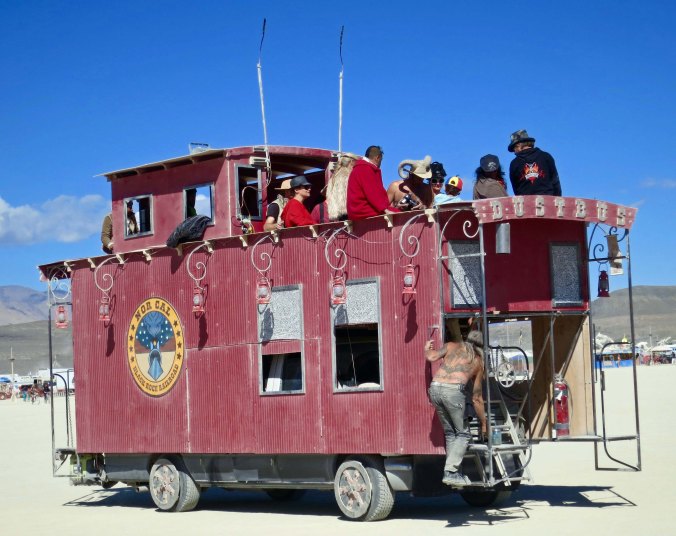 Trains are one of the themes for mutant vehicles. This caboose fits right in. 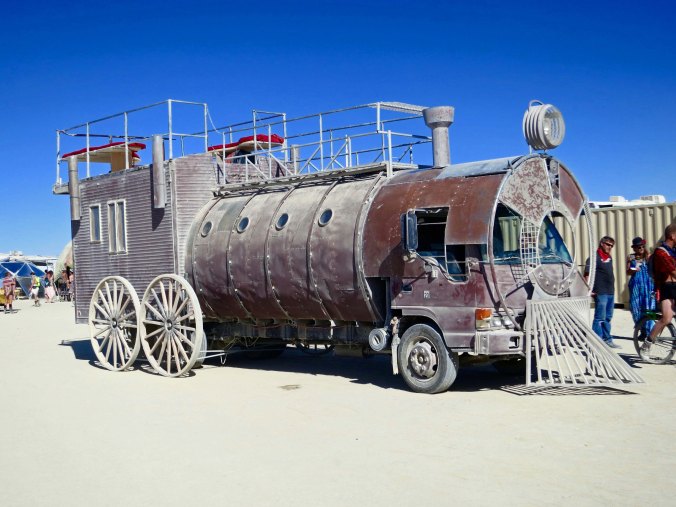 As does this steam engine. The grill on the front of this steam engine and Never Was Haul is known as a cattle catcher, BTW. I am not sure that the cow is in any better condition after a collision with a train, but the engine is. They also work for moose and buffalo!

This is one of the more scary dragons that roam the Playa. Most of these fellows breathe fire as an added attraction.

This ferocious looking dragon had chains for reins and palm trees for wings. I think it is a creation of the NOLA camp at Burning Man.

Numerous animals wander the Playa. This is a Sparkle Pony. (Sparkle Pony is the name for Burners who show up at Burning Man and expect to be waited upon.) Our friend Leslie Lake thinks that is a great idea and has adopted Sparkle as her Playa Name.

Some of the animals are just plain friendly looking, such as this rabbit.

And this buck toothed dog.

The Cheshire Cat is, of course, noted for its huge grin.

My guess is a giant cow. Her eyes flash out beams at night, giving this friendly beast a more scary persona.

This mechanical horse with its carriage represents the heavy steampunk presence at Burning Man. 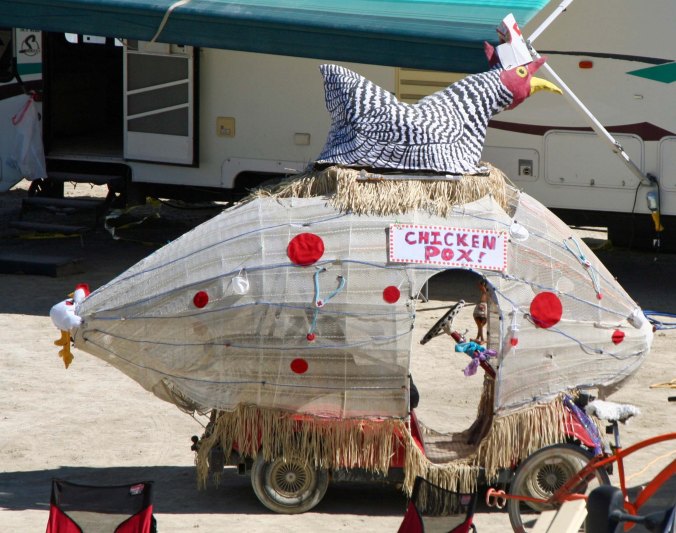 I finish off my animals with this humorous Chicken Pox.

Once upon a time, this section of the Black Rock Desert was a huge inland sea. So why shouldn’t there be sailing ships at Burning Man?

And yachts. This boat is named Christina and looks quite gorgeous at night.

As might be expected in an ancient sea there are also numerous creatures of the ocean at Burning Man, such as this crab with its colorful shell.

And an articulated fish. 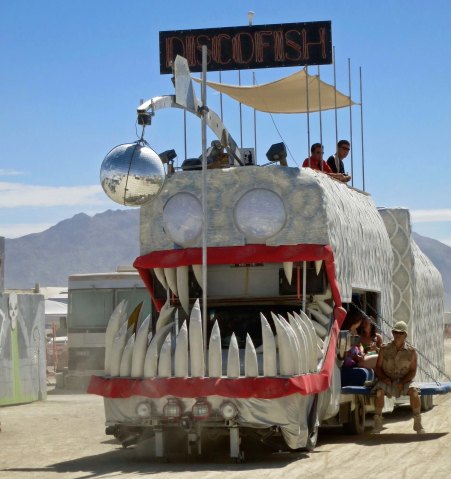 Many of the fish swimming in the Black Rock Desert feature large teeth, such as this Disco-Fish.

Big fish trying to swallow equally big fish. What puts this mutant vehicle into my weird category is the tongue, however. Note the stirrups so a Burner can hop on for a ride.

I am not sure what this creature is, but I think it belongs in the sea. I’ll go with seahorse. 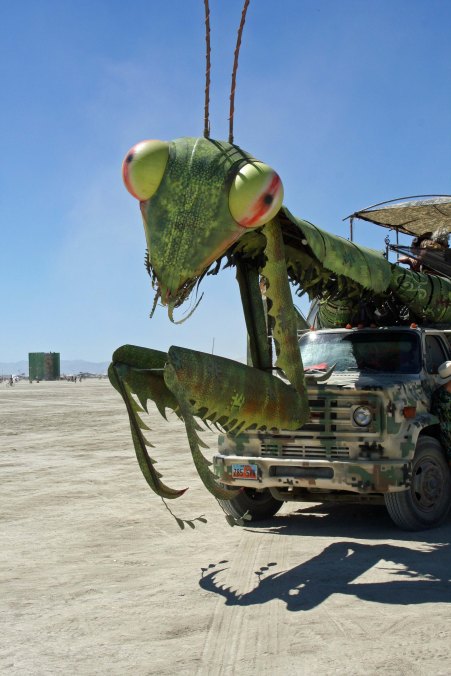 There are numerous insect mutant vehicles at Burning Man. My favorite is the praying mantis. So I will let it represent the bugs.

Speaking of bugs, here is a VW Bug art car.

And his bigger cousin (much bigger), Walter the VW Van. (Photo by Don Green.) 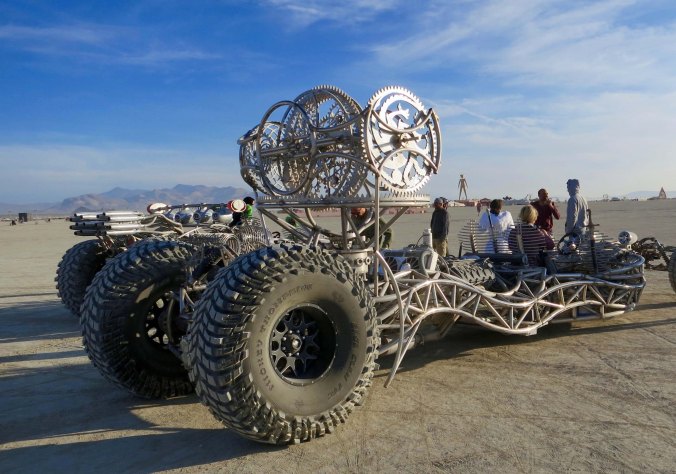 While I am on vehicles, I’ll include this dream of a hot rodder’s hot rod. 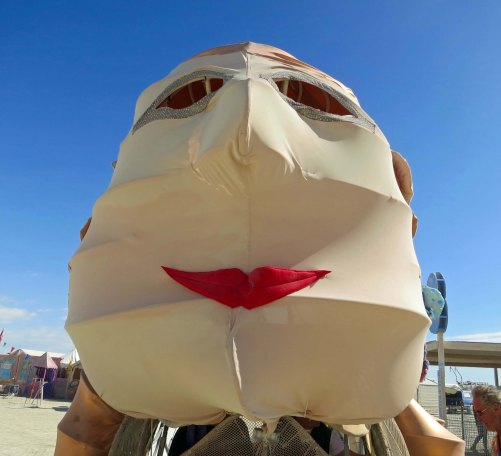 Often, it’s the faces on the mutant vehicles that capture my attention. Pucker up. 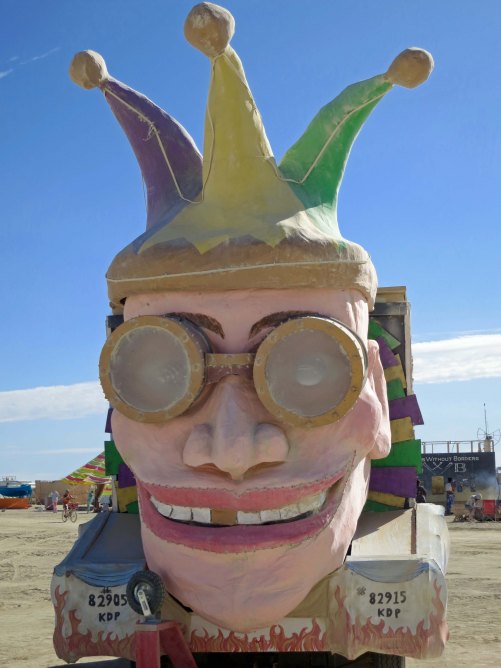 This joker has another memorable face. 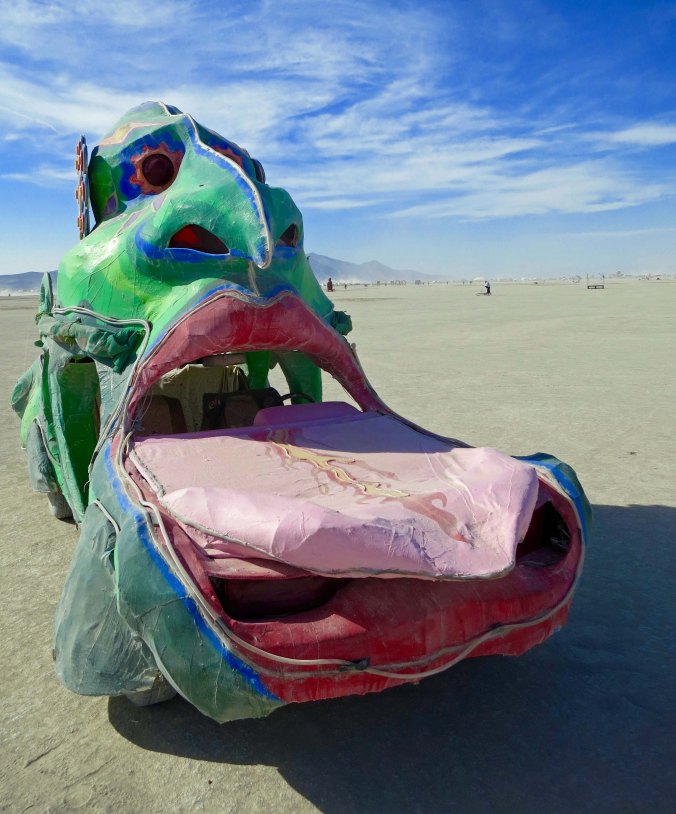 I think ‘Kilroy was here’ of Kilroy fame may have been the inspiration for this face with its large tongue.

NEXT BLOG: I’ll finally get Sully landed on the Hudson River and off of his plane.